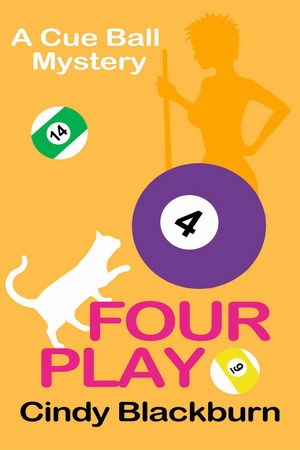 This is a work of fiction. Names, characters, places, brands, media, and incidents are either the product of the author’s imagination or are used fictitiously. Any resemblance to actual events or locales or persons, living or dead, is entirely coincidental. The author acknowledges the trademarked status and trademark owners of various products referenced in this work of fiction, which have been used without permission. The publication/use of these trademarks is not authorized, associated with, or sponsored by the trademark owners.

No part of this book may be reproduced in any form or by any means without the prior written consent of the publisher, excepting brief quotes used in reviews.

This one's for my critique group:

For Joanna, who tells me what’s good work and what isn’t.

For Jane, who laughs in all the right places.

For Bob, who gave me the title for number four.

“It’s been five months, Jessie. Let’s just do it.”

I knew exactly what Wilson wanted us to “just do,” but asked anyway. “Do what?”

“You know what. Let’s get married and get it over with.”

I blinked twice. “That is not the most romantic of proposals, Mr. Rye.”

“We already did romance. Five months ago.” He reached over and tapped my engagement ring. “You forgetting Hawaii?”

I glanced down at the diamond Wilson had given me that night—on the beach, under a full moon, Christmas Eve. And yes, in Hawaii.

“The whole nine yards of romance,” he muttered impatiently. “Some women would even call this romantic.” He waved at the scenery, and I tore my eyes away from my ring.

Okay, so the man did have a point. Lake Lookadoo was indeed lovely. And if you’re into the rustic-rural thing, Wilson’s lakefront shack would charm your hiking boots off.

But I’m not into rustic, or rural. Yes, I might enjoy the occasional glass of champagne on his screened-in porch, but I am far less enamored with the supposed house that porch is attached to. Evidently the person who built the place sixty years ago considered indoor plumbing a passing fad. And the furniture? Let’s just say the Adirondack chairs we were presently utilizing were the crowning glory of the décor.

“Lake Lookadoo is romantic as hell.” Wilson glanced down at his cats. “Right guys?” he asked, and Bernice and Wally stopped supervising the ducks a few yards away to look at me.

I rolled my eyes and dutifully agreed Lake Lookadoo is romantic as hell.

“So, what do you say, Jessie? Let’s set a date for our wedding.”

I promised we would set a date.

“Soon,” I mumbled and went back to watching the ducks.

“Oh?” I looked up from the phone and cringed at my cat. “Frankie Smythe,” I mouthed, and Snowflake’s whiskers twitched.

“Don’t you remember?” Frankie was asking. “It was right after I got my license. You said I could borrow it for a special occasion.”

“Miss Jessie!” He emitted an exasperated sigh, and I confessed that I did remember.

I mean, how could I forget? My young friend and former neighbor had been begging to get behind the wheel of my Porsche since he graduated from kindergarten. So when Frankie finally got his driver’s license, I lost my head and agreed to let him drive my car. This complete lapse of good judgment happened right after I got engaged, when I was feeling rather elated with life. That will teach me.

At least I had demonstrated a little common sense. I insisted Frankie would need a very special occasion to drive the Porsche and somehow assumed his wedding day would be that occasion. Considering the child is only sixteen, I thought my car would be safe for years. Maybe even decades.

But apparently Frankie had a different understanding of very special. And apparently taking his girlfriend Lizzie to the Junior Prom qualified.

I closed my eyes and prayed for strength, and whispered a barely audible “Yes.”

Frankie held his hand to the phone, but I could still hear him proclaim the good news to what had to be the entire junior class of Clarence High School. “The Porsche, the Porsche!” he yelled. “I’ve got Miss Jessie’s Carrera for the Cotillion!”

Eventually he remembered me. He thanked me a few hundred times, and much to my dismay, made arrangements to pick up my car the following day.

“I’ll be careful,” he promised. “I’ll drive real slow and park way in the back of the lot. No dents, no scratches, no nothing.”

I told Frankie I had the utmost confidence in his driving skills and hung up. Then I rushed over to my file of important papers and double checked that my car insurance was paid up and current.

Kirby timed it perfectly. “When’s the wedding?” he asked just as I took aim at the four ball, and of course I missed the shot.

“Yeah, right.” I made sure he saw my smile and pointed him to the stripes. Then I stepped back to contemplate the situation.

Camille came up from behind me. “Your game is pitiful,” she said, and I thanked her for noticing.

At least Gus offered a little sympathy. He put an arm around my shoulder and insisted Kirby had practically cheated. “Everyone knows not to mention your wedding.”

Actually, everyone knew just the opposite. All my buddies knew the sure way to throw me off and beat me at the pool table was to mention my engagement.

I winked at Gus and stepped forward to congratulate the victor.

“That was kind of sad,” my best friend Candy told me.

“It was pathetic.” My other best friend Karen was a bit more blunt. “You lose all the time lately.”

“Well, I have an excuse tonight.” I plopped myself down on my favorite bar stool. “I’m distracted.”

My friends exchanged another knowing nod. “By Wilson,” they said in unison.

I gave up and waved to Charlie. “Champagne?” I asked, and bless his heart, the bartender made an effort to help. He came over, bottle in hand.

Considering my mood, you might find this odd. But champagne became my beverage of choice a year earlier when my divorce became final. Trust me, every day without my ex-husband is a day worth celebrating. Even days when my game is off.

“Matthew and Gina have been talking about you,” Charlie said as he handed me a glass. He tilted his head towards the proprietors of The Stone Fountain, who were busy at the other end of the bar. “They’re worried about you.”

“No one needs to worry,” I said, but Charlie had already wandered off.

I sipped my champagne and watched Matthew Stone load his wife’s serving tray with a round of drinks.

“Gina, I would expect.” Karen was also watching the Stones. “But it’s got to be bad when Matthew starts worrying.”

“No one needs to worry,” I tried again.

“They’re right to worry,” Candy said. “Jessie’s lost more games this week than in the entire time we’ve known her.”

I groaned out loud. “Can we change the subject, please?”

“Good idea. Let’s talk about your writing.” She glanced around me and spoke to Karen. “She’s starting to call it ‘the dreaded W-word.’”

“The dreaded W-word.” I curled my lip.

“Come on, girlfriend. You love your job. What about the Romance Writers Hall of Fame?”

I rolled my eyes and reminded my friend she had never actually read one of my books. “And even if you had, there’s no need to worry.”

“Are you kidding? Everyone knows that you, or Adelé Nightingale, or whoever you want to call yourself, write the world’s best sex scenes.”

“And plenty of them,” Candy said. “But so far
A Singular Seduction
has no sex scenes whatsoever. Zero!” She snapped her fingers. “Zip!”

I again rolled my eyes. “Perhaps Adelé Nightingale is in a slight slump,” I said. “But I have suffered from plot plight before, you know?”

“This isn’t any old plot plight,” Candy said. “This is sex scenes.”

“A sex-scene slump and a pool-playing slump.” Karen shook her head. “Oh boy.”

“We all know what the real problem is,” Candy said.

“Okay, here we go!” I threw my hands in the air. “Have at it, ladies. Knock yourselves out.”

And so they did. Yadda, yadda, yadda. Veritably channeling Wilson Rye himself, my friends enlightened me as to my real problem.

“I am not stalling.”

“But you keep saying you’re waiting for spring.”

“I am waiting for spring.”

“Well then, I’m waiting for summer.”

“Oh, and you’re one to talk. You’ve never even been married.”

Karen shrugged. “So what’s your point?”

“And you.” I faced Candy. “You’ve been engaged so many times we’ve lost track.”

Candy shrugged. “So what’s your point?”

I scowled and tried to remember the point.

Karen patted my knee. “Cheer up, Jess. Once you marry Wilson all your slumps will disappear. The whole town is waiting for this wedding.”

A fact that didn’t exactly cheer me up, but she was right. Like it or not, Wilson and I were local celebrities. Wilson, because he’s a prominent cop. And me, because of my writing career.

Several of Adelé Nightingale’s most recent masterpieces had become bestsellers, and Jimmy Beak, our local TV station’s star reporter, had a thing against romance fiction. Or at least he had a thing against me. He made a point of denouncing me and my career at every opportunity.

On a more flattering note, and our local newspaper had recently run a piece about my induction into the Romance Writers Hall of Fame. To add to the human-interest angle, the
Clarence Courier
had emphasized my engagement—my own “personal romance.”

“People I don’t even know stop me on the street to ask about the wedding,” I said.

“There now, you see?” Candy asked. “Everyone wants you to get married. And soon.”

“You’re not getting any younger,” Karen added helpfully.

I folded my arms and glared. “I’m over fifty, so therefore I should rush into things?”

“What is the rush, anyway? Wilson’s after me twenty-four-seven, and now you two.”

“I think it’s sweet he’s in such a hurry,” Candy persisted. “His little cottage sounds so romantic.”

Okay, so I may have snorted. “It’s a shack. It’s anything but romantic.”