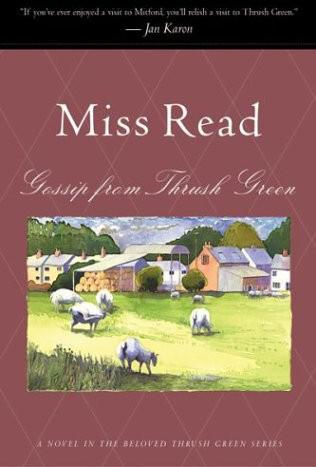 GOSSIP FROM THRUSH GREEN returns readers to the delightful English village, neighbor to Fairacre, for a golden summer. But this sleepy, pristine setting conceals a flurry of activity amongst the villagers. Rumor has it that Mr. Venables is considering retirement just as the village's teacher is about to make an important decision. Molly Curdle prepares for a new baby. The kindly vicar, Charles Henstock, works on his sermon -- quite unaware of the disaster that will overtake him. However, there is never any doubt that all will end well in this very English village.

The prolific Miss Read is Mrs. Dora Saint, whose novels draw on her own memories of living and teaching in a small Enlish village. She and her husband, a retired schoolmaster, have one daughter and enjoy a quiet life in Berkshire.

A Novel in the Beloved Thrush Green Series

If you've ever enjoyed a visit to Mitford, you'll relish a visit to Thrush Green.
—
Jan Karon To Janet
with love and thanks

16 Sunday Lunch at The Misses Lovelock's 193

I
N
far too many places in England today, the agreeable habit of taking afternoon tea has vanished.

'Such a shocking waste of time,' says one.

'Much too fattening a meal with all that dreadful starch,' says another.

'Quite unnecessary, if one has had lunch or proposes to eat in the evening,' says a third.

All very true, no doubt, but what a lot of innocent pleasure these strong-minded people are missing! The very ritual of tea-making, warming the pot, making sure that the water is just boiling, inhaling the fragrant steam, arranging the tea-cosy to fit snugly around the precious container, all the preliminaries lead up to the exquisite pleasure of sipping the brew from thin porcelain, and helping oneself to hot buttered scones and strawberry jam, a slice of feather-light sponge cake or home-made shortbread.

Taking tea is a highly civilised pastime, and fortunately is still in favour at Thrush Green, where it has been brought to a fine art. It is common practice in that pleasant village to invite friends to tea rather than lunch or dinner. As Winnie Bailey, the doctor's widow, pointed out one day to her old friend Ella Bembridge, people could set off from their homes in the light, and return before dark, except for the really miserable weeks of mid-winter when one would probably prefer to stay at home anyway.

'Besides,' said Ella, who was fond of her food, 'when else can you eat home-made gingerbread, all squishy with black treacle? Or dip into the pounds of jam on the larder shelves?'

'I suppose one could make a sponge pudding with jam at the bottom,' replied Winnie thoughtfully, 'but Jenny and I prefer fresh fruit.'

'Jenny looks as though a sponge pudding might do her good,' said Ella, naming Winnie's maid and friend. 'She seems to have lost a lot of weight recently. She's not
dieting,
I hope?'

Winnie profferred the dish of shortbread, and Ella, who was certainly not dieting, took a piece.

'I've noticed it myself,' confessed Winnie. 'I do hope she's not doing too much in the house. As you know, we've offered to look after Tullivers when Frank and Phil are away, and Jeremy will stay with us. So I'm determined that Jenny shall not overwork then.'

Tullivers was the attractive house next door to Winnie Bailey's. Built of the local Cotswold stone, it faced south, standing at right angles to her own home, and their gardens adjoined. Since the death of her doctor husband, Donald, she had been more thankful than ever for her good neighbours, the Hursts.

Frank Hurst was an editor, and his wife Phyllida a free-lance writer. They had met when Phil was busy submitting work some years earlier. Her first husband had been killed in a motoring accident, and she had been left to bring up her young son Jeremy with very little money.

This second marriage had turned out to be a very happy one, and the inhabitants of Thrush Green thoroughly approved of the Hursts, who played their part in village life, supplying prizes for raffles, jumble for the many rummage sales, and consenting, with apparent cheerfulness, to sit on at least half a dozen local committees. Jeremy was a happy child, now in Miss Watson's class as Thrush Green village school, and due to start at his new school, in nearby Lulling, next September.

In April, Frank and his wife were off to America where he was to spend six weeks lecturing. It was too long a period to keep Jeremy from school, and Winnie had offered at once to look after him.

'It would give me enormous pleasure,' she assured the Hursts, 'and the boy is never any bother. Just the reverse in fact. It would be such a comfort to have a man about the place again.'

And so it was arranged.

On this particular February afternoon, when Winnie and Ella were enjoying their modest tea-party, the weather was as bleak and dreary as any that that wretched month can produce.

A few brave snowdrops had emerged under the shelter of Winnie's front hedge, and the winter jasmine on the wall still made a gallant show, but the trees remained gaunt and bare, and the prevailing colour everywhere, from heavy clouds above to the misty fields below, was a uniform grey.

'The winters get longer,' commented Ella, craning her neck to look out of the window, 'and the summers shorter. Dimity and Charles don't agree, but I'm going to keep a weather diary next year to prove my point.'

Charles Henstock was the rector of Thrush Green, and had married Dimity, Ella's lifelong friend, a few years earlier. They lived contentedly in the most hideous house on the green, a tall, badly-proportioned Victorian horror, covered in peeling stucco, whose ugliness was made more noticeable by the mellow beauty of the surrounding Cotswold architecture.

Most of the Thrush Green residents were resigned to this monstrosity, but Edward Young, the local architect, who lived in the most splendid of Thrush Green's houses, always maintained that a glimpse of the Henstocks' rectory gave him acute pains in the stomach. His wife Joan, a cheerful down-to-earth person, dismissed this as quite unnecessary chi-chi, and hoped that he was not going to grow into one of those tiresome people who affect hyper-sensitivity in order to impress others.

This trenchant remark had the effect of restoring Edward's good humour, but he still stuck to his guns and was the first to attack the unknown and long-dead architect of Thrush Green's great mistake.

'Dimity,' went on Ella, 'was wondering if she could persuade Charles to move his study upstairs. It's so cold and dark at the moment, and they could easily turn that little bedroom over the kitchen into a nice snug place for the writing of sermons. Heaven alone knows, there are only about two rooms in that house which get any sun.'

'I gather he doesn't like the idea,' commented Winnie.

'Well, he's not being
too
obstinate, but suggests that they wait until after their holiday.'

'That should put it off nicely,' agreed Winnie, pouring her guest a second cup of Darjeeling tea. 'Now tell me the rest of the news.'

'Dotty is toying with the idea of adopting a little girl.'

Winnie put down the tea pot with a crash.

'She can't be! The way she lives? No adoption society would countenance it!'

Dotty Harmer, an elderly eccentric friend, beloved of both, lived some half a mile away in a dilapidated cottage, surrounded by a garden full of chickens, ducks, geese, goats and any stray animals in need of succour. Indoors lived several cats, kittens, dogs and puppies. Occasionally, a wounded bird convalesced in a large cage in the kitchen, and once an ailing stoat had occupied the hospital accommodation.

'He is rather smelly,' Dotty had admitted, 'but it's handy for giving him scraps when I'm cooking.' Even her closest friends had found hasty excuses for declining invitations to meals whilst the stoat was in residence. At the best of times Dotty's food was suspect, and a local ailment, known as 'Dotty's Collywobbles' was quite common.