A Bead in the Hand (Glass Bead Mystery Series Book 2) 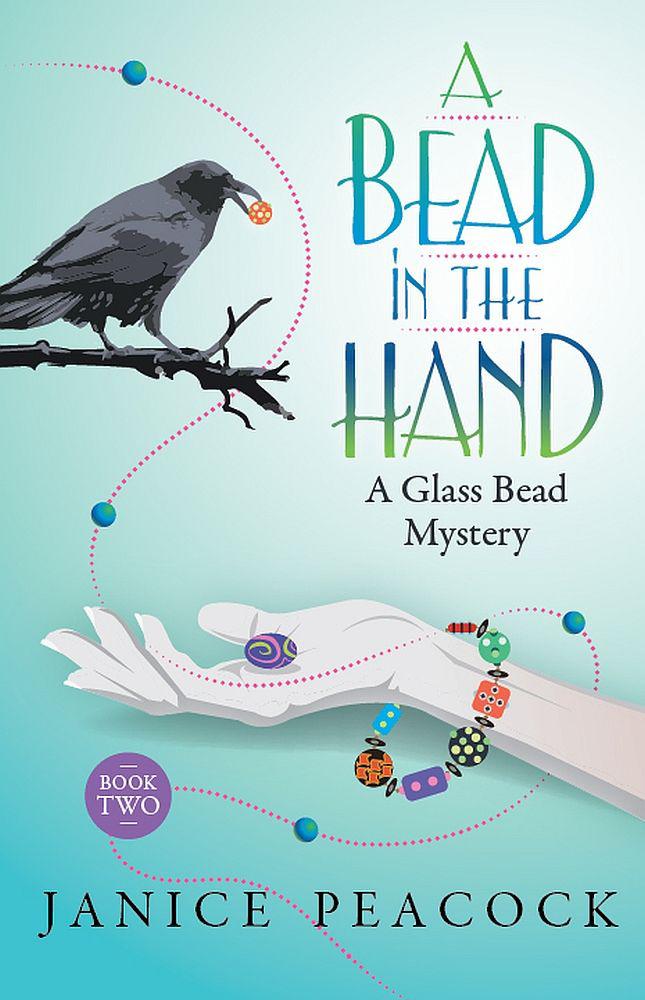 A BEAD IN THE HAND

This is a work of fiction. Names, characters, places, brands, media, and incidents are either the product of the author’s imagination or are used fictitiously. Any resemblance to similarly named places or to persons living or deceased is unintentional.

THE WEEKEND GOT OFF
to a bad start when I stepped on Gumdrop. It went from bad to tragic when I held a woman in my arms and knew there was no way I could save her. She was already dead.

I was standing on my tallest stool, reaching to grab the last tray of beads from the top shelf in the guest room closet.

“Almost…got…it,” I said to my cat Gumdrop, who was watching me from the bed.

Finally, I hooked my fingernails on the edge of the tray and pulled it slowly off the shelf, careful not to spill the contents of the shallow box. In preparation for an upcoming sale, I had placed each bead into its own separate spot in the grid of compartments in the tray. I took a slow step down one of the rungs of the stool, then another. Relieved that I was almost down, I took my final step toward the floor and realized—too late—I’d stepped on Gumdrop. The ear-piercing screech of a pissed-off cat threw me off balance—that, of course, and the fact that I was not stepping on the floor, but instead on the body of a cat who was attempting to flee. I tried to regain my balance, but it was a lost cause. With one last futile leap, I tried to stick a perfect 10-point landing, gymnast-style, holding the tray above my head. I saw myself falling in slow motion, the tray of glass beads still in my hands, as I plunged to the floor. The beads left the tray and went flying through the air. It was bad enough that they were falling, and possibly breaking, but it was a real insult that they were pelting down on my head like hail.

“Dammit, Gummie, why are you always in the way?” I yelled at Gumdrop, who had run from the room as fast as his fat body could carry him. I’d find him later, likely jammed under a pillow on the sofa, to sleep off the scary experience.

“Ouch,” I added to no one but myself, feeling for lumps on my head.

Searching the Oriental carpet in my office-cum-guestroom, I tried to find all of the beads that had been flung from the tray by my not-so-graceful fall. When I squeezed under the bed, a swirl of cat hair drifted past me. I made a mental note to run the vacuum cleaner under here the next time I tackled the housekeeping in my half of the duplex.

After examining each bead, I replaced it into its cubby in the tray. These were glass beads, ones I had made myself in a torch by melting different colors of glass together. Fortunately, all the beads seemed to have made it, having been cooled properly overnight after I’d completed each one. I’d found twenty-three of the beads, but there was one empty spot left in the tray. Where had that bead gone? Under the desk? No. Still in the closet? No. In the carpet’s fringe? No.

The doorbell rang. Brushing Gumdrop’s hair off my jeans, I trotted to the door. I needed to get out the duct tape and give myself a once-over to get rid of the fluff, but didn’t bother. I didn’t want Val to have to wait. A quick glimpse in the mirror confirmed that my mop of light brown hair was sticking out in every direction, as usual. Then I noticed something strange—a large blue bead, wedged tightly in my cleavage. The missing bead. What a relief to spare Val from seeing that. It spared me, too, from getting teased by her for weeks to follow.

I pulled open the front door.

“Eh uh en geh de doo ohen,” my neighbor Val said, while holding a green glass pitcher of margaritas in one hand, two stemmed glasses with a bowl of guacamole teetering on top of them in the other, and a bag of Tostitos held in her teeth.

“What?” I said, grabbing the bag of tortilla chips from her mouth.

“I said, ‘I couldn’t get the door open.’ So I used my elbow to ring the bell. Glad you didn’t take much longer, Jax, because I was about to drop this pitcher of margs and that would have been a true tragedy.”

“I’ve already dropped enough glass things for today. I just dropped an entire tray of beads. None of them broke, fortunately. I need that inventory for the Bead Fun sale in Portland.”

Val set down the glasses on the kitchen table. “Salt?” she asked. “For the rims of the glasses?”

“Sorry, I only have table salt.”

“Jax, honey, when are you going to learn how to properly stock your pantry? Really, you can’t always rely on me to bring you snacks and drinks.”

“It’s worked for me so far,” I said, shrugging.

“Here, let’s open these chips, and we’ll just suck the salt off them before drinking our margaritas, okay?”

“Sounds good.” I admit I let Val take care of me. It makes her feel good to think she is taking care of an artist who is able to make pretty things but needs a lot of help with just about everything else—especially eating, drinking, and shopping for clothes.

I’ve lived next door to Val for nearly three years now, and they have been some of the best in my life. Val is enormous in every way—big red hair, pushing 6 feet tall, big bones (I say with the utmost tact), and big jewelry—the glitzier, the better. She’s a hairdresser, and I am constantly surprised that any new client who comes into the salon doesn’t turn and run. She’s beautiful, but somewhat scary until you get to know her.

She and I live in a Craftsman bungalow in Seattle that my Great-Aunt Rita split down the middle a dozen years ago to create a duplex. I live in the right half, and Val and her series of good-for-nothing boyfriends live in the left half.

After Great-Aunt Rita died, the house became mine, and I decided to move away from the golden sunshine and giant insects of Miami. My mom and dad still live there, and are constantly bugging me to move home before I die from mildew poisoning due to the damp weather in the beautiful Pacific Northwest. It’s gorgeous here, but a different kind of beauty than Miami. In fact, it’s the opposite of Miami in every way imaginable: wet, cold, rocky beaches, fewer Cubans (which unfortunately means fewer Cuban restaurants), gray skies instead of blue skies, better coffee, and better drivers.

When I moved to Seattle, I left behind more than the sunshine and my parents. I’d broken up with my boyfriend Jerry. He was more interested in watching sports, drinking a little too heavily, and eating take-out food than he was in having a meaningful relationship with me. He was upset when I left, but like he’d lost a nice watch, rather than a partner. I was not bitter. Okay, I was bitter, but only in a good, healthy way.

I’d left my job at Clorox, too. It was there I’d met Jerry, a scientific glass blower, who was the first person to show me how to work with molten glass. When my department needed a special glass part for an experiment, we would call our in-house glass blower, and he’d make a vacuum tube, or condenser, or even custom test tubes. The best part of my job was going into his workshop in the basement of the building, with its enormous lathe and the soft hum of the ventilation system. Jerry showed me it’s possible to make fancy glass components for experiments, but he also taught me how to make beautiful things in the flame by melting glass. He shaped it in all sorts of ways while it was still molten: slender tubes, perfect spheres, and complex containers. Even after our relationship had fizzled, my love of glass continued burning strong.

Val and I settled down at the old oak kitchen table and filled our glasses. “What are your big plans for this weekend?” Val asked.

“I’m leaving tomorrow for a bead bazaar in Portland,” I said, with probably too many chips in my mouth to be considered polite.

“Oh, that sounds like fun—or is it just bizarre?”

“Bazaar, Val, not bizarre. It’s going to be terrific. It’s like a flea market, you know, with people selling their beads and jewelry in booths and at tables. I’m going to stop and pick up Tessa on the way. We’re rooming together at The Red Rose Hotel where the bead sale is being held. It should be fun.”

“It’s supposed to be haunted,” Val said, knitting her perfectly-plucked eyebrows. “I’ve heard perfume will keep ghosts away. Do you want to borrow some of mine?”

“No, Val. No. I’m sure it’s not haunted.” Where did Val get these ideas? I scooped up some guacamole on a chip and popped it in my mouth. Having tried some pretty terrible dishes from Val’s kitchen in the past, I’m usually wary of her concoctions, but I could always count on her for excellent Mexican food. “Val, your guac is the best I’ve ever tasted,” I said, swiping another chip through the bowl.

Broken Crescent (Devil's Sons Motorcycle Club Book 2) by Thomas, Kathryn
Mind the Gap (In Too Deep) by McMillin, Casey
The Death of William Posters by Alan Sillitoe
A Promise of Thunder by Mason, Connie
Real World by Natsuo Kirino
Four Truths and a Lie by Lauren Barnholdt
Girl Online by Zoe Sugg
Good Man Friday by Barbara Hambly
Mrs. Jeffries and the Best Laid Plans by Emily Brightwell
Talking to Ourselves: A Novel by Andres Neuman
Our partner