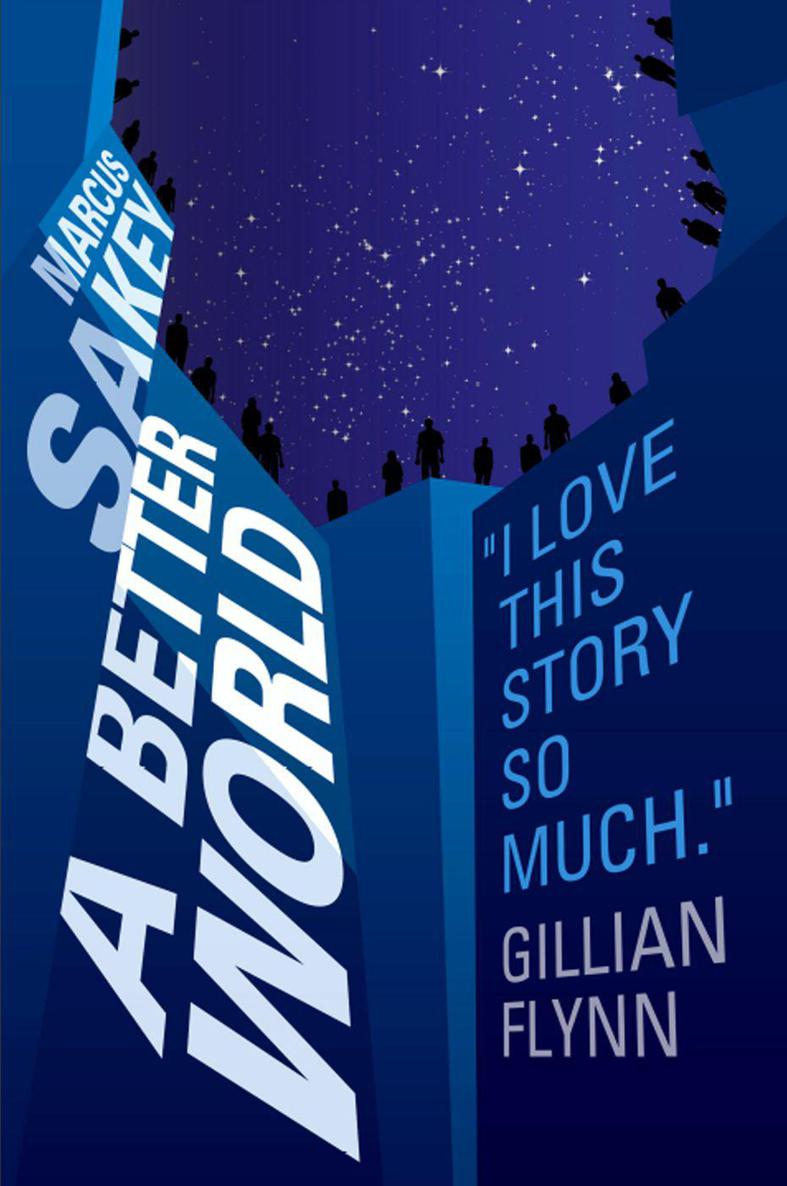 ABOUT
A BETTER WORLD

The brilliants changed everything.

Since 1980, 1% of the world has been born with gifts we’d only dreamed of. The ability to sense a person’s most intimate secrets, or predict the stock market, or move virtually unseen. For thirty years the world has struggled with a growing divide between the exceptional . . . and the rest of us.

Nick Cooper has always fought to make the world better for his children. As both a brilliant and an advisor to the President of the United States, he’s against everything the terrorists represent. But as America slides toward a devastating civil war, Cooper is forced to play a game he dares not lose—because his opponents have their own vision of a better world.

And to reach it, they’re willing to burn this one down.

From Marcus Sakey, “the master of the mindful page turner” (Gillian Flynn) and “one of our best storytellers” (Michael Connelly), Book Two of the Brilliance Saga is a relentless thrill ride that will change the way you look at your world—and the people around you.

The Two Deaths of Daniel Hayes

For my father, who showed me what it means to be a man.

ONE WEEK BEFORE THANKSGIVING

Cold liquid splashing across his face brought Kevin Temple back to himself.

He’d been on the road all night, a dedicated run from Indiana hauling a load of fresh vegetables. Fifteen minutes out of the depot in Cleveland, and he had that stale feel, too much coffee washing down too much beef jerky. What he’d really been craving was a double cheeseburger, but while it would surprise no one to see a trucker gone flabby around the middle, it was a point of pride that at thirty-nine he weighed only ten pounds more than he had in high school.

When sirens lit up the darkness behind him, he jumped, then cursed. Must’ve zoned out, gotten heavy on the pedal—only no, the speedometer read sixty-seven. He’d been tired, but not so whacked that he’d drifted out of his lane. A broken taillight? It was after four in the morning; maybe the cops were just bored.

Kevin eased over to the shoulder. He yawned and stretched, then turned on the interior lights and rolled down the window. A week until Thanksgiving, and the cold air felt good.

The state trooper was middle-aged, with a lean, wolfish look. His uniform was starched, and his hat hid his eyes. “You know why I stopped you?”

It must be a broken taillight. Some cops liked to rub your face in it. Kevin slid the license from his wallet, grabbed the manifest
and registration, then opened the door and climbed down. A second trooper had joined the first.

“Keep your hands where I can see them, please.”

“Sure,” Kevin said. He held up the paperwork. “What’s this about, Officer?”

The trooper held the license up, clicked on a flashlight. “Mr. . . . Temple.”

“You do this route regularly?”

The trooper said, “Are you an abnorm?”

“What are you—why do you care?”

“Just answer the question. Are you an abnorm?”

It was one of those moments, the kind when he knew what he
should
do, in that idealized sense of the word. He should refuse to answer. He should make a speech about how that question was a violation of his civil rights. He should tell this bigoted cop to shut his idiot mouth, throwing around a word like “twist.”

But it was four in the morning, and the road was empty, and he was tired, and sometimes the
should
s get overwhelmed by the
willing to
s. So he settled for putting a little attitude into his voice as he said, “No, I’m not a brilliant.”

The trooper stared at him for a moment, then flicked the flashlight up. Kevin winced and squinted, said, “Hey, whoa, I can’t see.”

There was motion in his peripheral vision, the other cop raising a device that crackled electric blue, and then lightning struck Kevin Temple square in the chest. Every muscle locked up at once
and he heard something like a scream coming out of his mouth and stars blew out his vision as claws sank into his ribs.

When the pain was finally done, he collapsed. His thoughts were slippery, and he struggled to process what had just happened. The ground was cold. And moving. No, he was moving, being dragged. His hands were behind him, and something held them together.

Then liquid splashed his face. The cold made him gasp, and he sucked some of the fluid into his mouth. It was foul. A pungent chemical presence he’d never tasted but had smelled a thousand times, and that was when panic swept out the last vestiges of pain, because he was handcuffed on the side of the road and someone was pouring gasoline on him.

“Shh.” The wolfish trooper squatted down beside him. His partner tipped up the gas can and stepped backward, pouring a trail. “Quiet now.”

“I’ll do whatever you want, I have some money, you can have anything—”

“Be quiet, okay? Just listen.” The man’s voice was firm but not harsh. “Are you listening?”

Kevin nodded frantically. The gas fumes were everywhere, ringing in his nose, burning his eyes, chilling his hands and face.

“I want you to know that it’s not because you’re a normal. And I’m honestly sorry that we have to do it this way. But in a war, there’s no such thing as an innocent bystander.” For a moment it seemed like he was going to add something else, but then he just stood up.

The purest fear Kevin Temple had ever known filled him, pressed him out of himself, wore him like a suit. He wanted to cry,
to beg, to scream, to run, but he couldn’t find any words, his teeth chattering, his arms bound, his legs rubber.

“If it’s any comfort, you’re part of something bigger now. An essential part of the plan.” The soldier struck a match against the side of a pack, once, twice. The flame caught and flared. The bright yellow flicker reflected in his eyes. “This is how we build a better world.”

Then he dropped the match.

Arms wide and palms empty, hyperconscious of how many weapons were trained on him, Cooper was thinking about all the ways things hadn’t gone as planned.

It had been a busy month. A busy year. He’d spent half of it undercover, away from his children, hunting the most wanted man in America. But when he’d found John Smith, Cooper had discovered that everything he believed was built on lies. That his agency wasn’t just covert—it was corrupt, led by a man who was fostering a war for his own gain.

The aftermath of that discovery had been bloody and dramatic, especially for his boss. And the weeks since had been split between cleaning up the mess and reconnecting with his children.

But today was supposed to have been quiet. His ex-wife Natalie was taking the kids to visit her mom. Cooper had no meetings, no details to attend to, and at the moment, no job. He planned to hit the gym, then go out for lunch. Afterward maybe a coffee shop, spend the afternoon lost in a book. Whip up dinner, open a bottle of bourbon, read and drink his way to an early bedtime. Sleep ten straight hours for the sheer luxury of it.

He made it as far as lunch.

It was a hole-in-the-wall Arabic place he liked, lentil soup and a falafel sandwich. He was sitting at a two-top by the front window, hollow November sun glaring off the silverware, dumping hot sauce into his soup, when he realized he wasn’t alone.

It happened just like that. One moment, the opposite chair was empty, the next, there she sat. Like she’d formed from sunlight.

Shannon looked good. Not
fit and healthy
good, but
make a man think wicked thoughts
good: a fitted black top that bared her shoulders, hair slipping past her ears, her lips quirked in that half smile. “Hi,” she said. “Miss me?”

He leaned back, regarded her. “You know, when I asked you on a date, I meant soon. Not a month later.”

“I had some things to take care of.”

Cooper read her, not just the words, but the subtle tensing of her trapezius muscles, the sideways dart her eyes wanted to make but didn’t, the alert readiness with which she took in the room.
Still a soldier, and not sure if you’re on the same side
. Which was fair. He wasn’t sure himself. “Okay.”

No One is Here Except All of Us by Ausubel, Ramona
Hillary_Flesh and Blood by Angel Gelique
Created Darkly by Gena D. Lutz
Target Underwear and a Vera Wang Gown by Adena Halpern
Fireside by Susan Wiggs
Into the Shadows by Karly Kirkpatrick
Banger's Ride: Insurgents Motorcycle Club (Insurgents MC Romance Book 5) by Chiah Wilder, Hot Tree Editing
Follow You Down by K. B. Webb, Hot Tree Editing
Claimed by Tara Crescent
Secret of the Shadows by Cathy MacPhail
Our partner