Read A Bride for Donnigan Online

A Bride for Donnigan 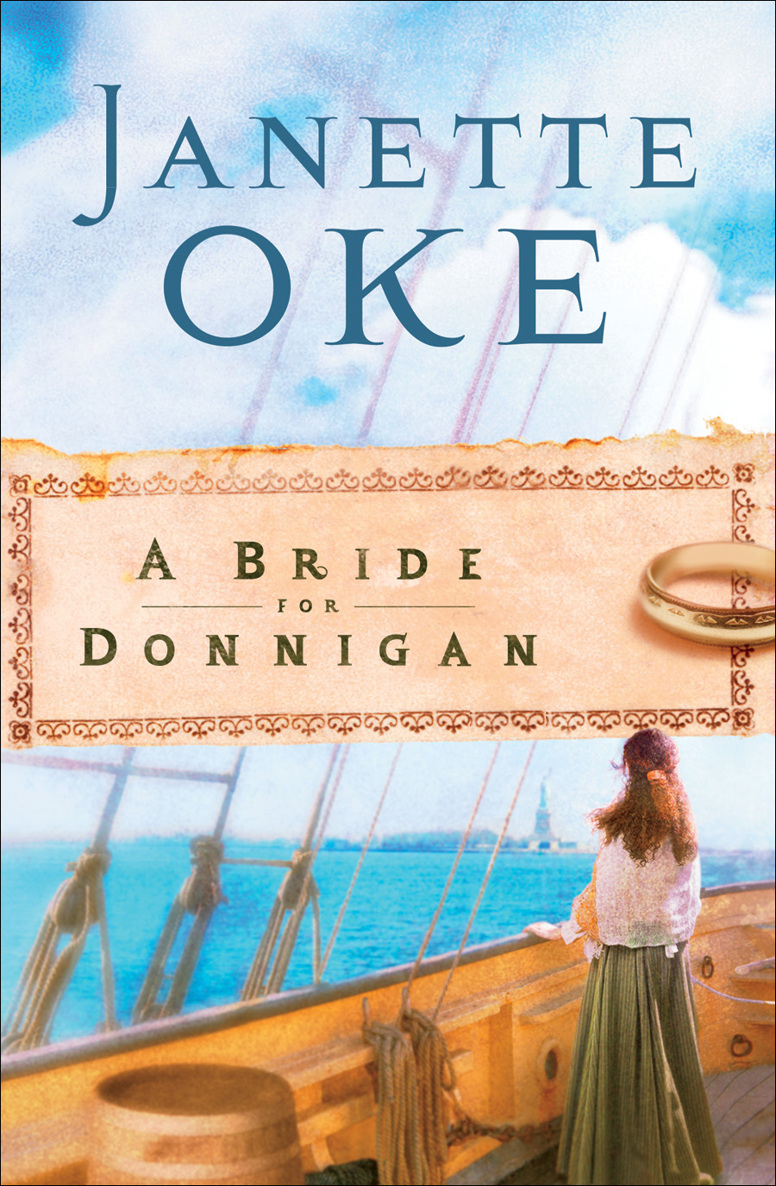 A Bride for Donnigan

Beyond the Gathering Storm
When Tomorrow Comes

S
EASONS OF THE
H
EART

W
OMEN OF THE
W
EST

The Calling of Emily Evans   •   Julia’s Last Hope
Roses for Mama   •   A Woman Named Damaris
They Called Her Mrs. Doc   •   The Measure of a Heart
A Bride for Donnigan   •   Heart of the Wilderness
Too Long a Stranger   •   The Bluebird and the Sparrow
A Gown of Spanish Lace   •   Drums of Change

To the special cousins
I grew up with—
Bob, Don, Richard, Tom, Kenneth Archie
And Eva

JANETTE OKE was born in Champion, Alberta, to a Canadian prairie farmer and his wife, and she grew up in a large family full of laughter and love. She is a graduate of Mountain View Bible College in Alberta, where she met her husband, Edward, and they were married in May of 1957. After pastoring churches in Indiana and Canada, the Okes spent some years in Calgary, where Edward served in several positions on college faculties while Janette continued her writing. She has written forty-eight novels for adults and another sixteen for children, and her book sales total nearly thirty million copies.

The Okes have three sons and one daughter, all married, and are enjoying their fifteen grandchildren. Edward and Janette are active in their local church and make their home near Didsbury, Alberta.

This series of Women of the West has presented a number of different personalities in various circumstances that women of the past faced, and it seems right that a little attention be given to those who came, “sight unseen,” to the Americas to be brides of frontier men.

We know from history that these marriages did occur. But what do we really know about them? What would move a man to seek a complete stranger to be his lifelong mate? What kind of woman would respond to such a request? How might she feel as she traveled over oceans and frontiers to get to her unknown destination? Did the marriages indeed
work
?

I don’t pretend to have all the answers—but from a little research and with a little imagination, we can journey with one such couple to that significant first meeting and experience some of the emotions they must have felt on the way to that moment—and afterward.

She stood for a long time, staring through the dark of the morning mist at the posted notice. Her lips moved ever so slightly as she read again the strange words by the aid of the flickering streetlamp beside them—then read them once more to make sure she understood their meaning.

“Ladies!” The word seemed to shout off the printed paper. “The Opportunity of a Lifetime in the New American Frontier! Well-Secured Ranchers, Farmers, and Businessmen Desire Wedded Partners to Share Their Life and Prosperity. INQUIRE WITHIN.”

“Surely it doesn’t mean …” She mentally began an argument with the words. But she didn’t even finish the unspoken statement. Her eyes were locked on the notice, and she read it through for the fourth time.

“Would a girl—a woman really think of … ?” Her argument picked up again. “No, surely not. I never could even—even
think
of such a thing.”

Her slight shoulders gave just a hint of a shrug. The thin coat, much too small even for her tiny frame, was reluctant to allow even that much room. She seemed to shrink back within its strained seams. The chill of the early morning made her shiver slightly in spite of her resolve to endure the cold.

“Sure now, and I’d best be on or I’ll be late for my hawking,” she scolded herself and was about to leave when two other young women approached quickly—excitedly.

Kathleen did not have time to move away from the notice on the wall. The girls seemed not to see her, so intent were they on their mission. They shoved right past her, and the taller of the two read the notice aloud for the shorter, more sturdy one. Kathleen took a step backward and hoped she was hidden in the shadows.

“Ladies. The opportunity of a lifetime in the new American frontier. Well-secured ranchers, farmers, and businessmen desire wedded partners to share their life and prosperity. Inquire within.” There could be no mistake—the now-familiar words had been confirmed by another.

“Well, I never—!” exclaimed the shorter girl, and the two clutched each other and hooted and squealed. Kathleen found her cheeks staining red. For a reason she couldn’t quite understand, she felt embarrassed.

“And you’re thinking to apply?” demanded the shorter girl.

Another squeal. Another shriek of laughter.

“And why not? There’s no
prosperity
to be had here in London. Not for the likes of me.”

“But to leave home—”

“
Home?
Home has been little more than the streets for me—”

She broke off, but her words trembled in the cold, early morning air. Both girls became instantly serious, and Kathleen again shivered in her thin coat.

“Do you think—? I mean, do you really think that a body—well, might … ?” The one called Erma was unable to finish the sentence.

“What’s to lose?” said her companion with an obvious shrug of her broad shoulders. “We have nothing here.”

Erma nodded. “And you’ve already signed up? What do you have to do? I mean, do you need to have a dowry? Make promises?”

“Just give your name and promise to be there on the day of sailin’, that’s all.”

“But it is, I tell you. They’re already holdin’ a passage ticket with my name on it. I saw it for myself.”

Kathleen stirred in the shadows. She had to get to work. She would lose her job if she didn’t; and though it wasn’t much, it was all she had, and it did bring in a few pence each week.

It was the first time the two girls seemed to notice her. Their heads jerked around in quick attention, but when they saw the slight girl move into the light they visibly relaxed.

“You gave me a start, dearie,” said the bigger, taller girl.

“Sure, and I’m sorry,” apologized Kathleen, her Irish accent becoming thicker with her discomfort.

“No need to fret,” said the shorter Erma. “No harm done.” Her voice was soft and friendly, and Kathleen felt herself drawn to her immediately. She wished—but she quickly chided herself and shook her shoulders as though to also shake off her desire for the unattainable. Yet it would be so nice—so nice to have a real friend.

“Are you thinkin’ of signing up?” Erma continued, her eyes still on Kathleen.

Kathleen was about to make quick denial but Erma went on.

“Peg here has already signed. Says there’s nothing to it. I …” The girl hesitated, then lifted her chin as though suddenly coming to her own resolve. “I’m thinkin’ on signing myself.”

The bigger girl, Peg, gave a squeal and reached to impetuously give her friend a hug.

“I need to get to my work,” apologized Kathleen, moving to leave. “I’ll be losing me job and that’s the truth.”

Peg cut in quickly. “When we get to America, we won’t need to worry none about hawkin’ posies in the street or sweepin’ out the city gutters.” Then she stopped and seemed to look more closely at the slender girl before her. “You’ve a pretty face,” she observed candidly. “They’d be right glad to have you sign.”

Kathleen stopped mid-stride. She opened her mouth but no words came out. She felt her face flushing again.

“If you’re thinkin’ on signin’,” the girl named Peg said in a confidential tone, “don’t wait too long. They only have room on ship for about twenty, and the passages are being taken real fast.”

“Right there—through that door. I’ll take ya in,” said Peg excitedly. The two girls turned toward the door and Kathleen stood and watched them go, feeling alone and forgotten.

“If you decide to join us, we’d be most happy to travel with ya,” Erma flung back over her shoulder.

So she had not been forgotten, after all.

Kathleen stirred herself once more. She had to get to work. She pulled her thin coat more closely about her shoulders, took a deep breath and moved forward. She needed to make up for lost time. If only she could hurry. If only—She shook the thoughts from her head and hunched into the biting morning air. She couldn’t hurry and that was that. She would do the best she could to make up for lost work time. And she started off down the dark, dirty streets, her body rocking slightly with each step she took. The decided limp had been with her for as long as she could remember.