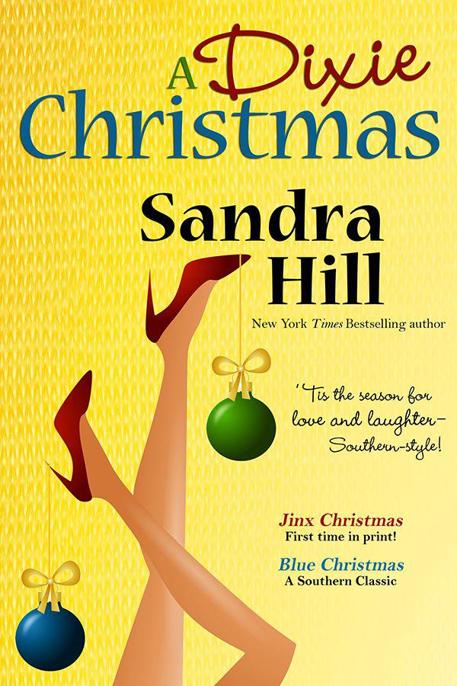 Laughter and love combine in Sandra Hill’s BLUE CHRISTMAS—with a touch of Elvis magic. Wealthy Wall Street businessman Clayton Jessup III has only one reason for arriving in Memphis a few days before Christmas—to sell off his inheritance, an embarrassingly kitschy hotel named The Blue Suede Suites. His feelings for the Land of Elvis are dark: his long-dead Memphis mother abandoned him and his dad when Clay was a baby, and now Clay wants nothing to do with a southern legacy that couldn’t be more different from his sophisticated big-city life.

But then he steps in trouble—literally—when he confronts the bizarre group of Elvis impersonators who’ve set up a living Nativity scene on his property. One slip of a wingtip in some sheep poop lands Clay in the care of gorgeous Annie Fallon, whose big-haired Elvis-girlfriend get-up can’t hide her wholesome, sexy appeal. Annie and her brothers have set up the Nativity scene to earn some badly needed money for their struggling dairy farm.

The last thing she needs is an angry Yankee with a concussion and a come-hither smile . . .

In JINX CHRISTMAS, sexy NASCAR star Lance Caslow makes a last-ditch effort to win back his ex-wife Brenda. Five years ago, his reckless pursuit of racetrack fame tore them apart and broke Brenda’s heart. Now Lance shows up in Louisiana determined to make things right this Christmas, not just for himself and Brenda, but for their young daughter, Patti.

He’s got his work cut out for him, and desperate measures are needed. Lance will do
anything
to prove he’s worthy of Brenda’s trust again—even join the Cajun Christmas show starring a raucous Cajun family whose menfolk dance for charity events in little more than a smile . . .

A wise editor once told me that in the best of all books the reader should both laugh and cry. That’s what I wish for you with JINX CHRISTMAS and BLUE CHRISTMAS, a lot of smiles and perhaps a tear here and there. The holiday season is made for poignancy and humor.

BLUE CHRISTMAS, a stand-alone story, was originally published in 1998 as “Fever” in the long out-of-print anthology, BLUE CHRISTMAS. It has been tweaked and updated, as has the short novella JINX CHRISTMAS, which has never been published, but was available for a short time on my website. JINX CHRISTMAS can stand alone, as well, although it is linked loosely with my Cajun/Jinx series. See my website for more details.

I also hope you’ll check out my anthology ’TWAS THE NIGHT, which is available in print, ebook, and unabridged audiobook at Audible.com, Amazon.com and iTunes. The book was written Round-Robin style with Trish Jensen and Kate Holmes (aka Anne Avery), so that it reads more like a novel than an anthology. It is a tweaked and updated version of our laugh-out-loud funny HERE COMES SANTA CLAUS.

Authors often cringe at having to go back and reread their old books, but I must say with a shameless lack of humility that these books are really good. And they can be read over and over each holiday season.

Let me know what you think of this anthology. I welcome reader letters. And come visit my website (www.sandrahill.net) and my Facebook page (Sandra Hill Author) for details on past and coming books, videos, genealogy charts and other good stuff.

Wishing you the happiest Christmas ever, and, as always, wishing you smiles in your reading,

This anthology is dedicated to my four sons and three grandchildren who love my love of the Christmas season. I’m not saying I over-decorate, but I do put up a Christmas tree the day after Thanksgiving and I do wax with nostalgia over each and every special ornament uncovered, including all the handmade mice that Grandma Campbell made. I need at least four weeks to savor the anticipation of this blessed day.

But especially this book is dedicated to my son Rob who once asked me when he was a little boy: “Are God and Santa Claus related?”

Doesn’t that say it all?

They should have named it “Heartbreak Hotel.”

Clayton Jessup, III was about to enter his suite at the Blue Suede Suites when he heard the high-pitched squeals of the two blue-haired ladies in matching neon pink, “Elvis Lives” sweat shirts.

He glanced over his shoulder to see who was generating so much excitement and saw no one.
Uh-oh!
In an instant, he realized that they thought he was the George person
. . .
probably some Memphis celebrity. Even worse, they were pep-stepping briskly toward him with huge smiles plastered across their expectant faces, and autograph books drawn to the ready.

“Open the damn door,” he snarled at the wizened old bellhop, whose kidney-spotted hands were fumbling with the key.

“I’m tryin’, I’m tryin’. You don’t wanna get caught by any of these country music fanatics. Last week over on Beale Street, they tore off every bit of a construction worker’s clothes for souvenirs, right down to his skivvies, just ’cause they thought he was Kenny Chesney.”

“Who the hell is Kenny Chesney?”

“You’re kidding, right?” the bellhop said, casting him a sideways once-over of disbelief.

Clay grabbed the key out of the bellhop’s hand and inserted it himself. Just before the women were ready to pounce, gushing, “Oooh, George. Yoo hoo!”, the door swung open and they escaped. Leaning against the closed door, he exhaled with a loud whoosh of relief.

He heard one of the women say, “Mabel, I don’t think that was George. He wasn’t wearing a cowboy hat, and George never goes anywhere without his trademark cowboy hat.”

“Besides, he was too skinny to be George. He looked more like that Richard Gere. A younger version of Richard, I mean.”

Richard Gere? Me? Mildred needs a new set of bifocals.

“Richard Gere,” Mabel swooned. “Hmmm. Is it possible
. . . ?
Nah. That guy was taller and leaner than Richard Gere. Besides, Richard Gere is more likely to be off in Tibet with the Dolly Lay-ma, not in Memphis.”

“At least we saw Elvis’s ghost at Graceland today.”

Their voices were fading now; so Clay knew they were walking away.

Dropping his briefcase to the floor, he opened his closed eyes
. . .
and almost had a heart attack. “Holy shit! What is this?” he asked the bellhop.

“The Roustabout Suite,” the bellhop said proudly, shifting from foot to foot with excitement. The dingbat looked absolutely ridiculous in his old-fashioned, red, bellhop outfit, complete with a pillbox hat. “It’s the best one in The Blue Suede Suites, next to the Viva Las Vegas and the Blue Hawaii suites, of course. Families with children love it.”

“I do not have children,” Clay gritted out.

“Aaahh, that’s too bad. Some folks think the spirit of Elvis lives in this hotel. Seen ’em myself a time or two. Maybe if you pray to the Elvis spirit, he’ll intercede with the Good Lord to rev up your sperm count. Or if the problem is with the little lady, you could
. . .
uh, why is your face turnin’ purple?”

“I do not have children. I am not married. Mind your own damn business.”

“Oops!” the bellhop said, ducking his head sheepishly. “Sometimes I talk a mite too much, but I’m a firm believer in Southern hospitality. Yep. Better to be friendly and take a chance than . . .” The fool blathered on endlessly without a care for whether Clay was listening or not. Really, he should be home in a rocking chair, instead of parading around a hotel like an organ grinder’s monkey. Another “to do” item to add to his itinerary: check hotel’s retirement policy.

The Windvale Sprites by Crook, Mackenzie
Too Many Crooks by Richard S. Prather
The Glass Casket by Templeman, Mccormick
Philippa by Bertrice Small
Sanctuary of Mine by S. Pratt, Emily Dawson
Assassin (John Stratton) by Falconer, Duncan
Blackdog by K. V. Johansen
Tombstoning by Doug Johnstone
The Devil's Cauldron by Michael Wallace
The Various Haunts of Men by Susan Hill
Our partner