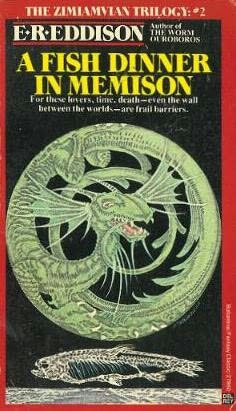 A Fish Dinner in Memison is a novel centering on the characters of King Mezentius and Fiorinda; much is revealed about the links between principal characters and the separate worlds of the novel, not fully resolved in the other novels in the trilogy. The character of Lessingham is also resolved to its greatest extent in all the novels of the trilogy

An English adventurer burns his great house to the ground
...
a train crashes in France . . . two strangers meet twice, thirty years apart, in an Italian cafe . .
. events very much of our mun
dane world—yet queerly in resonance with the concerns of Zimiamvia, its King and the mysterious Lady Fiorinda.

For, as philosophy, poetry, a
nd wit enliven the royal dinner
table, the Lady Fiorinda makes a casual request of the King—that he create a world for her amusement
...
a world containing such flawed and improbable places as France, Italy, and En' gland, which, imperfect though they are, may offer diversions not to be found in Zimiamvia . . .

"Every woman Mr. Eddison writes of is a Queen. The idea,
woman,
in these pages is most quaint, most lively, most disturbing. She is delicious and aloof; greedy and treacherous, and imperturbable. She is all else that is high, or low . . ."

a fish dinner in memison

A Fish Dinner in Memison

All rights reserved under International and Pan-American Copyright Conventions. Published in the United States by Ballantine Books, a division of Random House, Inc., New York, and simultaneously in Canada by Ballantine Books of Canada, Ltd., Toronto, Canada.

I DEDICATE THIS BOOK which he had twice read

a letter of introduction
XVli

i.
aphrodite
in verona
1

iii.
a match and some lookers on
20

vii. seven against the king 86

x. the lieutenant of reisma
153

Map of the Three Kingdoms
319

This divine beauty is evident, fugitive, impalpable, and homeless in a world of material fact; yet it is unmistakably individual and sufficient unto itself, and although perhaps soon eclipsed is never really extinguished: for it visits time and belongs to eternity.

though what if Earth

Be but the shaddow of Heav'n, and therein

Each to other like, more than on earth is thought?

This is a terrific book.

It is not much use asking, whether a given writer is great or not. The future will decide as to that, and will take only proper account of our considerations on the matter. But we may enquire as to whether the given writer does or does not differ from other writers: from, that is, those that went before, and, in especial, from those who are his and our contemporaries.

In some sense Mr. Eddison can be thought of as the most difficult writer of our day, for, behind and beyond all that which we cannot avoid or refuse—the switching as from a past to something that may be a future— he is writing with a mind fixed upon ideas which we may call ancient, but which are, in effect, eternal—aristocracy, that is, and courage, and a "hell of a cheek". It must seem lunatic to say of any man that always, as a guide of his inspiration, is an idea of the Infinite. Even so, when the proper question is asked, wherein does Mr. Eddison differ from his fellows? that is one answer which may be advanced. Here he does differ, and that so greatly that he may seem as a pretty lonely writer.

There is a something, exceedingly rare in English fiction, although everywhere to be found in English poetry —this may be called the aristocratic attitude, and accent. The aristocrat can be as brutal as ever gangster was, but, and in whatever brutality, he preserves a bearing, a grace, a charm, which our fiction, in general, does not care, or dare, to attempt.

been strangers to each other. You may get in the pages of, say,
The Mahabharata
—the most aristocratic work of all literature—more sheer brutality than all our gangster fictionists put together could dream of. So, in these pages, there are villanies, and violences, and slaughterings that are, to one reader, simply devilish. But they are devilish with an accent—as Milton's devil is; for it is instantly observable in him, the most English personage of our record, and the finest of our "gentlemen", that he was educated at Cambridge. So the colossal gentlemen of Mr. Eddison have, perhaps, the Oxford accent. They are certainly not accented as of Balham, or Hoboken.

All Mr. Eddison's personages are of a "breeding" which, be it hellish or heavenish, never lets its fathers down, and never lets its underlings up. So, again, he is a different writer, and a difficult.

There is yet a distinction, as between him and the rest of us. He is, although strictly within the terms of his art, a philosopher. The ten, or so, pages of his letter (to that good poet, George Rostrevor Hamilton) which introduces this book, form a rapid conspectus of philosophy. (They should be read after the book is read, whereupon the book should be read again.)

It is, however, another aspect of being that now claims the main of his attention, and is the true, and strange, subject of this book, as it is the subject of his earlier novels,
Mistress
of
Mistresses,
and
The Worm Ouro
boros,
to which this book is organically related. (The reader who likes this book should read those others.)

This subject, seen in one aspect, we call Time, in another we call it Eternity. In both of these there is a somewhat which is timeless, and tireless, and infinite—that something is you, and me, and E. R. Eddison. It delights in, and knows nothing of, and cares less about, its own seeming evolution in time, or its own actions and reactions, howsoever or wheresoever, in eternity. It just (whatever, and wherever it is) wills to be, and to be powerful, and beautiful, and violent,
and in love.
It enjoys birth and death, as they seem to come, with insatiable appetite, and with unconquerable lust for more.

This shift of time is very oddly, very simply, handled by Mr. Eddison.—A lady, the astounding Fiorinda, leaves a gentleman, the even mor
e, if possible, astounding, Les
singham, after a cocktail in some Florence or Mentone. She walks down a garden path until she is precisely out of his sight: then she takes a step to the left, right out of this dimension, and completely into that other which is her own—although one doubts that fifty dimensions could quite contain this lady. Whereupon, that which is curious, and curiously satisfying, Mr. Eddison's prose takes the same step to the left, and is no more the easy English of the moment before, but is a tremendous sixteenth or fifteenth century English which no writer but he can handle.

His return, from there and then to here and now, is just as simple and as exquisitely perfect in time-phrasing as could be wished for. There is no jolt for the reader as he moves or removes from dimension to dimension, or from our present excellent speech to our memorable great prose. Mr. Eddison differs from all in his ability to suit his prose to his occasion, and to please the reader in his anywhere.

This writer describes men who are beautiful, and powerful, and violent—even his varlets are tremendous. Here, in so far as they can be conjured into modern speech, are the heroes. Their valour and lust is endless as is that of tigers: and, like these, they take life or death with a purr or a snarl, just as it is appropriate and just as they are inclined to. But it is to his ladies that the affection of Mr. Eddison's great and strange talent is given.

Women in many modern novels are not really females, accompanied, or pursued, by appropriate, belligerent males—they are, mainly, excellent aunts, escorted by trustworthy uncles, and, when they marry, they don't reproduce sons and daughters, they produce nephews and nieces.

Every woman Mr. Eddison writes of is a Queen. Even the maids of these, at their servicings, are Princesses. Mr. Eddison is the only modern man who likes women. The idea, woman, in these pages is most quaint, most lovely, most disturbing. She is delicious and aloof: delighted wit
h all, partial to everything (
Je
m'amuse,
she says). She is greedy, and treacherous, and imperturbable: the mistress of man, and the empress of life: wearing, merely as a dress, the mouse, the lynx, the wren, or the hero: she is the goddess, as she pleases, or the god; and is much less afraid of the god than a miserable woman of our dreadful bungalows is afraid of a mouse. And she is all else that is high, or low, or even obscene, just as the fancy takes her: she falls never (in anything, nor anywhere) below the greatness that is all creator, all creation, and all delight in her own abundant variety.—
Je m'amuse;
she says, and that seems to her, and to her lover, to be right, and all right

The vitality of the recording of all this is astonishing: and, in this part of his work, Mr. Eddison is again doing something which no other writer has the daring or the talent for.

He is also trying to do the oddest something for our time—he is trying to write prose. 'Tis a neglected, almost a lost, art, but he is not only trying, he is actually doing it His pages are living, and vivid, and noble, and are these in a sense that belongs to no other writer I know of.

H
is
Fish Dinner
is a banquet such as, long ago, Plato sat at As to how Mr. Eddison's philosophy stands let the philosophers decide: but as to his novel, his story-telling, his heroical magnificence of prose, and his sense of the splendid, the voluptuous, the illimitable, the reader may judge of these things by himself, and be at peace or at war with Mr. Eddison as he pleases.

This is the largest, the most abundant, the most magnificent book of our time. Heaven send us another dozen such from Mr. Eddison,

Internal Threat by Sussman, Ben
The Juggling Pug by Sean Bryan
Come Back by Rudy Wiebe
The Tunnel Rats by Stephen Leather
ESCAPE: A Stepbrother Romance (These Wicked Games Book 2) by Dark, Ava
How to Get Along with Women by Elisabeth de Mariaffi
Adoring Addie by Leslie Gould
Great Poems by American Women by Susan L. Rattiner
A Glimpse of the Dream by L. A. Fiore
Holiday Kink by Eve Langlais
Our partner