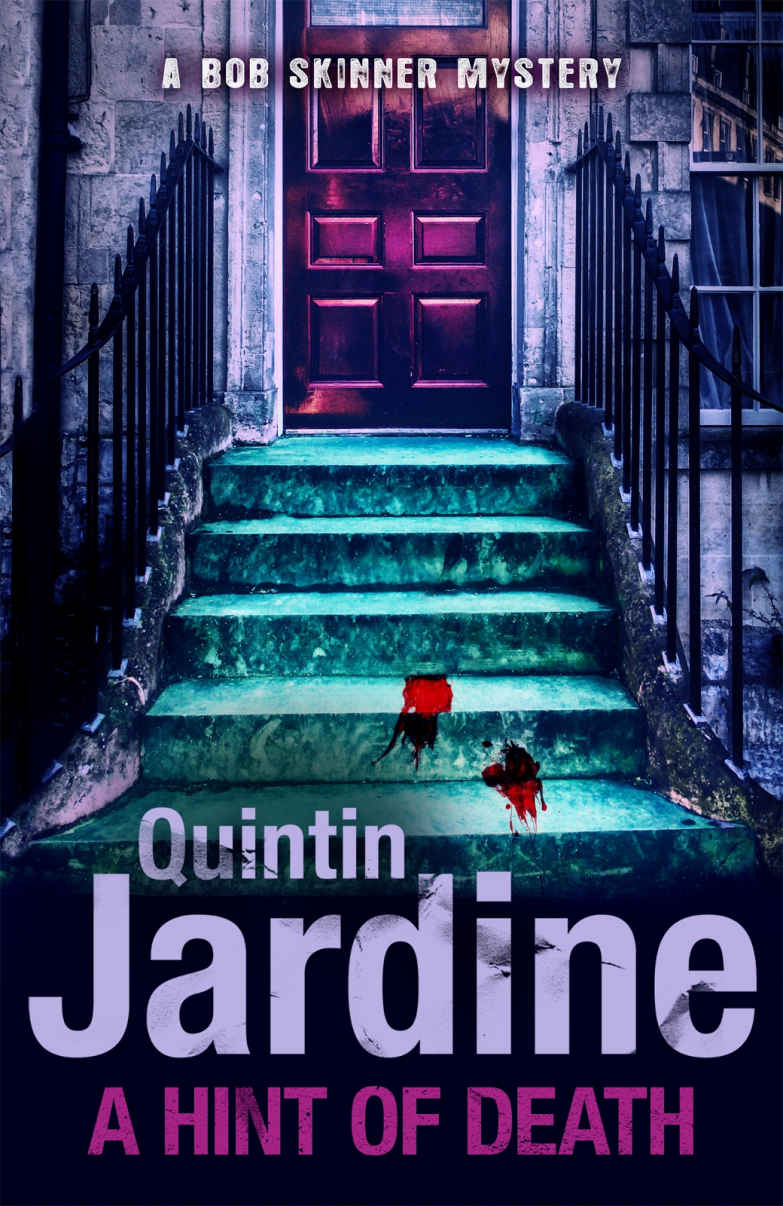 A HINT OF DEATH
Quintin Jardine

The right of Quintin Jardine to be identified as the Author of the Work has been asserted by him in accordance with the Copyright, Designs and Patents Act 1988.

First published as an Ebook by
Headline Publishing Group in 2014

Over twenty years ago Quintin Jardine abandoned the life of a media relations consultant for the more morally acceptable world of murder and mayhem. More than thirty published novels later, it’s a decision that neither he nor his global network of fans have ever regretted. Happily married, he splits his time between Scotland and Spain, but he can be tracked down through his website
www.quintinjardine.com
.

‘A triumph. I am first in the queue for the next one’
Scotland on Sunday

‘There is a whole world here, the tense narratives all come to the boil at the same time in a spectacular climax’
Shots magazine

‘A complex story combined with robust characterisation; a murder/mystery novel of our time that will keep you hooked to the very last page’
The Scots Magazine

By Quintin Jardine and available from Headline

Autographs in the Rain

A Rush of Blood

Pray for the Dying

A Hint of Death

As Easy As Murder

As Serious As Death

A Coffin for Two

On Honeymoon with Death

For the Death of Me

When DS Sauce Haddock visits an old teacher to investigate an alleged jewellery theft, it quickly becomes clear that another, far darker truth, lies beneath the surface.

With Chief Constable Bob Skinner’s help, Haddock will soon discover that outward appearances are never as they seem, and that no crime can go unpunished …

‘There never was a robbery, Mr Christie. Isn’t that the truth now?’

Detective Sergeant Harold ‘Sauce’ Haddock stood over the man in the chair. He tried to look severe, but gave up the attempt after a few seconds, as the irony of the situation won the day.

Twelve years earlier their roles had been reversed. Never the most diligent of scholars, he had been caught cheating in a school exam. Many another teacher … Big Bad John Henderson for example … would have emasculated him in front of the entire class, but all that Trevor Christie had done was shake his head sadly, as he picked the badly hidden crib sheet from his pocket and tore it in two.

‘I admit defeat,’ he had murmured. ‘You’ll always be crap at Latin, son. The grandeur of Ancient Rome and its language will always be lost on you. Time we both admitted it and you concentrated on the subjects that you are good at.’

His expression was much the same as he looked up at his former pupil, in the much less formal setting of his own living room. ‘Are you saying that I’m crap at lying, Harold?’ he asked.

An unprofessional smile forced its way on to Haddock’s face. ‘I suppose I am, sir,’ he agreed. ‘Would you like to tell me why you felt that you needed to? The fact of the matter is that you didn’t call the police. Your daughter did.’

‘You’re getting worse, Mr Christie. You really should have written some potential answers on a sheet of paper, then taken a quick shuftie to refresh yourself. Why exactly would your daughter get done? Miss Christie volunteered to Jackie Wright, my DC, when she interviewed her here yesterday that you told her that her mother’s jewellery had been stolen.’

Trevor Christie had been a popular teacher because there was nothing specific about the man that anyone could dislike, not even a fifteen-year-old forced to spend forty-five minutes in his company twice a week. He was so pleasantly mild, Sauce recalled, that he had never acquired a proper nickname, beyond the ‘Old Trev’ bestowed on him by Audrey Shields. (That Audrey: now she had a nickname. They called her ‘Raleigh’; he had been puzzled about that until a more worldly-wise classmate had explained that it had nothing to do with Elizabethan mariners. ‘It’s a bike, Sauce. Work it out.’)

‘It’s funny,’ he remarked. ‘When we’re at school our teachers are major figures in our lives, yet we get to know absolutely nothing about them. They’re of another generation, another place entirely. We all thought of you as a middle-aged bloke, but when I was in your class you must have been …’

‘I was thirty,’ Christie volunteered. ‘But I felt like a middle-aged bloke. That birthday’s a bloody big milestone, as you’ll find out soon enough, I suspect, and even more if you’re married with a family. You married, Harold?’

The detective smiled as he shook his head. ‘Not certifiably so, but as good as.’

‘Not yet; Cheeky says we should wait till we grow up. By the way, her real name is Cameron,’ he explained, ‘but that’s been her nickname all her life.’

‘I see. Josey … that’s my daughter, that’s her real name, not a short form … was six when I hit thirty.’ He paused. ‘Look, can we make this less formal, Harold? Will you at least take a seat?’

‘Sure,’ Haddock said. ‘But you can relax, sir; it’s not formal, and you’re not under caution. The truth is I’m on a day off, and using this part of it to cover my DC’s backside. She slipped up: she should have interviewed you as well yesterday, not just Josey … because of corroboration and all that.’

‘Understood, and it’s no problem for me. It’s as well I have a late start this morning, or you’d have missed me. Josey’s left for her school already.’

The detective eased himself into a chair facing his one-time teacher. ‘What happened to Josey’s mother?’ he asked, casually.

Something flashed in Christie’s eyes as he replied. ‘Tilda died of a brain tumour, three years ago. It came out of the blue. She was putting some winter clothes away in a high cupboard in our bedroom; she took a dizzy spell and fell off the steps. The same thing happened a few days later in the kitchen. She broke her ankle; when she told the story in A&E some bright young doctor sent her for an MRI scan and they found it. She was gone inside eight weeks,’ he snapped his fingers, ‘just like that.’

‘Thanks, Harold; in the midst of life, and all that. I hope it never happens to you.’

‘Me too,’ the detective replied sincerely. ‘How have you been since?’

‘I really have no idea. That might sound like a daft answer, but it’s all I can offer. I function; I get on with my job, and that’s it.’

‘I take it you’re still in teaching?’

‘Oh yes, I’m there for the duration now. I’m doing okay career-wise; I’m deputy head of Drumdonald Academy; that’s the biggest independent school in Edinburgh, as you probably know. Outside of that, though, I have nothing; just this big empty space where Tilda used to be. I’m still mourning I suppose; for how long, only God knows.’

‘Is Josey your only child?’

‘Yeah. She’s a brick. She’s very bright; straightforward and a woman of forthright opinions, just like her mother.’ He glanced at a family photograph that stood framed on the sideboard. Haddock had looked at it earlier; Tilda Christie had been a big woman, with strong features and a smile that struck him as being a little forced. Her daughter, who might have been around twelve when the picture was taken, resembled her, closely.

‘So what’s the real story about the jewellery?’ he asked. ‘Why did you let her report it as stolen?’

‘I didn’t think she would. I should have known better; she’s a volatile girl, just like her mother was. You’re right, Harold, she only repeated to your colleague what I’d told her. And I did that because I didn’t want her to know that I’d sold it. End of story.’

Haddock almost took him at his word and let the matter lie, but there was something in the teacher’s expression, or perhaps it was the way he had looked away from him as he spoke, that made him press on.

‘Not quite,’ he said. ‘That doesn’t add up.’ He looked around the well-furnished room. ‘For openers, sir, you don’t appear to need the money.’

‘Who says?’ Christie challenged, looking more animated in that instant than his former pupil had ever seen him. ‘Josey’s going to university in the autumn. Do you think that comes cheap?’

‘So why didn’t you tell her that you’d flogged the jewels for her benefit, rather than coming up with an unsupportable cover story?’

‘I didn’t want to burden her with the knowledge, I suppose, make her feel beholden to me. What I said, it was on the spur of the moment. I never thought it through.’

‘How much did you raise from the sale? You don’t have to tell me, mind. It’s none of my business.’

‘No, that’s all right. I got nine thousand. Some of it was old and quite valuable, stuff that Tilda had inherited. It was insured for twenty.’

‘Which one? Which auction house?’

The man frowned, his eyes shifting as he tried to come up with a name, any name, of a city auctioneer. A faint smile signalled his admission of failure, and then, a sigh. ‘Okay, I sold it privately, to a jeweller in Fountainbridge.’

Haddock whistled. ‘Then it’s as well we haven’t started treating this as a theft yet, or our people would have gone round all the dealers, you’d have been identified and it would have all gone very pear-shaped, beyond my reach.’

‘It’s okay. It hasn’t got that far so no harm done. You know you must tell Josey the truth now, don’t you?’

Christie nodded, gazing at the carpet, at an old stain left, most probably, by a spilled glass of red wine.

‘That’s if it is the truth,’ the detective said, raising an eyebrow as he spoke. ‘But somehow,’ he added, ‘I still don’t believe that it is.’