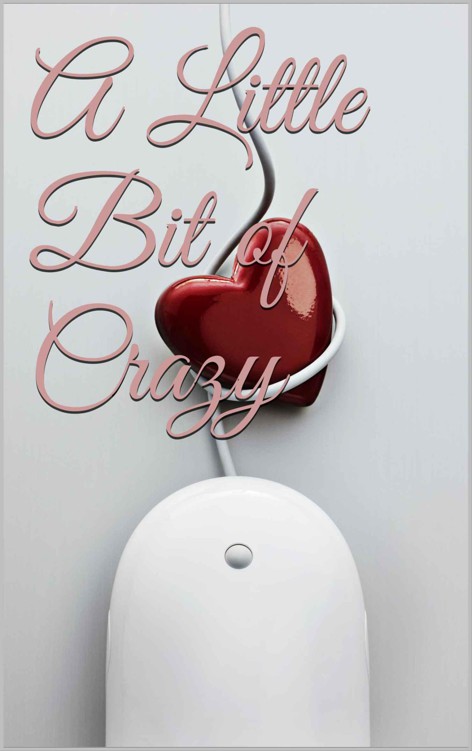 A Little Bit Of Crazy
(Part One)
By
A.
E. Murphy

The characters and events in this book are fictional. Any similarity to real persons, either living or dead, is purely coincidental and not intended by the author.

No part of this publication may be reproduced, stored, or transmitted in any form or by any means without the prior written permission of the author.

I can give you one example that still tickles me greatly. So, I got a call from someone, name forgotten, they told me about a party at the burnt patch. There was a small forest fire that left a large clearance of dead ground where all the “cool” and “hip” people hung out to drink and stuff. Unfortunately my dad didn’t agree with me partying so I was on lock down as usual. Probably grounded from sneaking out the previous weekend.

I felt crafty and totally awesome when I made it to the garage undetected and slotted myself into my dad’s BMW which by the way… he never used. Before I could put it in drive the lights came on and I saw my dad descend the stairs leading to the basement car park where unfortunately I was now sat. Crap.

Of all nights he chooses the BMW, this night had to be it. So I hastily climbed into the back and scrunched myself behind his seat cringing as he climbed in. Double crap. Luckily he turned up the music, Guns and Roses so he couldn’t hear me breathing. We drove for ages, he stopped at a burger place at one point ordered a shake and a couple of burgers.

Very sneakily I reached out whilst he was looking the other way and nabbed his half eaten burger. What can I say? I was hungry. He only vaguely noticed but probably assumed he’d eaten it himself. So, yeah. All of that happened and he was still oblivious. Then I got thirsty. Really thirsty. He’d turned the heating up to the max in the back and the front. I became sweaty, I was ready to jump out of the window when he turned the air con on and the car froze making my teeth chatter. Then up, then down. This went on for an hour whilst he sang at the top of his lungs to ‘welcome to the jungle’. Even made his voice screech and did the air guitar at red lights and stop signs. Totally humiliating but frigging hilarious.

So anyway, after the hundredth time of messing with the heating I got tired and achy and my back hurt, no doubt I’d be stuck in this position for life and then I got thirsty. Thankfully we pulled up somewhere. I daren’t lift my head to get a good luck. I used this moment to down his drink and stupidly turn the heating down.

When he got back in the car he was all, “what the hell? Why’s the heating down?” and turned it back up again before taking off. We ended up parking up in a deserted car park and another car pulled up beside us. Then a woman climbed into the passenger seat of the car we were in…

This next part will scar me for life. So she jumps my dad and they start full on making out. So bad her ass kept hitting the horn and the car began shaking. Then I heard a zip. My dad moan and all hell broke loose.

I screamed, loud and long, scrambled over the passenger seat and out of the car. I just almost witnessed my dad having sex. Can you imagine?

When I finally stopped freaking out they both
laughed so hard my dad fell to his knees and clutched his stomach as if in pain. Then he explained. “Honey, next time you make a phone call saying you’re going to sneak out and how I’ll never notice my car gone, don’t do it right outside my office.”

The bastard tricked me, the entire four hours in his car was for show. Down to the last detail. The crafty bastard. Funnily enough we became the best of friends after that ordeal.

My thing however, that I am good at is working!

Working, then partying, shopping, more partying, sex, lots and lots of amazing sex with hot boys. Freedom, another thing I enjoy immensely, my freedom. Freedom to party, freedom to work, freedom to shop, freedom to have lots of mind blowing sex.

So the reason for my outburst which you will see shortly is completely fair. I love my freedom, cling to that. That simple word that means so many things… freedom.

“Nope, not happening,” I scoff and sip my red wine, which tastes awful. My dad does have peculiar tastes when it comes to alcohol. Give me Amaretto on the rocks any day compared to this glass of grapes and vinegar! Yuck.

My dad sighs and sits back in his armchair, “It’s a great idea. James is a fine man.”

“I don’t doubt that one bit, he’s handsome, charming, got a great body…”

“Smart, knows the business, he’s perfect. He’ll make a fine husband to his future wife. That is not me by the way,” I say with a determined nod. End of discussion.

“Please Maya,” Apparently not. “He knows the business as well as I do, he’s trustworthy, with him at your side you won’t need to do half as much as what I do. You’ll be able to spend time with your future family. Together you could be great.”

Nope not happening. I sigh and look toward the crackling fire, a fireplace I know so well, a fireplace I’ve had sex in front of on many occasions. That will never happen again, that thrill, that excitement. Being married, especially an arranged marriage, it just seems so final. No more wild nights out. Double sigh.

Don’t get me wrong, I’m no whore, I’ve only slept with four people. I’m twenty one, fresh out of university with a degree in chemistry and preparing myself for the day I’ll take on my father’s pharmaceutical business on top of my own half. Hopefully later rather than sooner.

“Baby,” he says his voice low, his blue eyes brimming with emotion. “There is one other thing.” Later… later… later. I inhale sharply, I can see by the look in his eyes this is going to be bad. “Chemo failed.”

I look into his tired eyes and notice how weary he’s become, how sallow his skin is. Once golden now yellow and hanging from his bones. His gorgeous blue eyes now dark and misty, full of pain. His lung cancer has been a long battle, one we were certain he would win. He’s only fifty for crying out loud! And he’s always been healthy, this can’t be happening.

“How long,” my voice croaks, barely above a whisper.

He opens his arms and I run into his large soft chest. Inhaling deeply whilst letting his warmth envelope me. “With these new tablets I’m on and treatments they think six months to a year.” The tears begin to flow, heavy, large tears of pure sorrow. How can I lose this man I love so much? “James really does think the world of you. You know that.”

I can barely manage a nod. My entire body shakes with shudders and sobs as I cry, effectively soaking his shirt.

“I’m sorry I’m not going to be there to see you have kids,” he mumbles and kisses the top of my head. “I’m so sorry princess.”

For my daddy, I’ll do anything. Anything. Screw freedom. If this is his last request then I’ll do it. “I’ll marry him. If he asks.” I feel my dad’s entire body sag with relief. I’m glad to put him at ease.

Chapter One – One Year later

“Maya Johnson speaking,” I practically yawn into the phone but it’s disconnected before I get a reply. I slam the receiver down and sink back into my leather office chair. It spins.

“Someone sounds, umm cheerful,” I look up to the broad shouldered, muscled, toned, golden, dark haired, male leaning against the doorframe to my office.

I roll my eyes, “Hi James.” Fake cheery voice, full blast. “So happy you entered without knocking… could have been doing,” someone. “Anything.” Just kidding.

He meets my eyes with his mesmerizing greens, so green they put the first leaves of spring to shame. Chuckling slightly he steps into my office, his eyes never leaving mine. “Did you have a nice trip?”

“Uh-huh,” grumpy tone back on. “Thanks for covering for me.”

“So my dearest wife, are you actually going to be home tonight?” James sighs. I stare at my computer.

His fists clench at his sides, “So this is how it’s going to be. Christ Maya we’ve been married almost two months. You haven’t been home at all.”

“That’s hardly my fault, I spent the first month caring for my dying father. Then organizing his funeral. Then…”

“Partying with men that aren’t your husband in Las Vegas.” He growls and slams a magazine down on my desk. I look at the page he turns it to and cringe, not because of the males clustered around me and my best friend but because of how pissed I look. Classy. “You promised.”

His face goes blank, something he does when he doesn’t want to reveal his feelings, although that assessment is pretty obvious. I’ve known him long enough to know he’s aggravated by the way his fists are clenched so tight his knuckles are white and his arm muscles are practically bulging out of his suit jacket. “Because you’re my wife. Do you know how bad this looks on me?”