A Plague Of Crows: The Second Detective Thomas Hutton Thriller 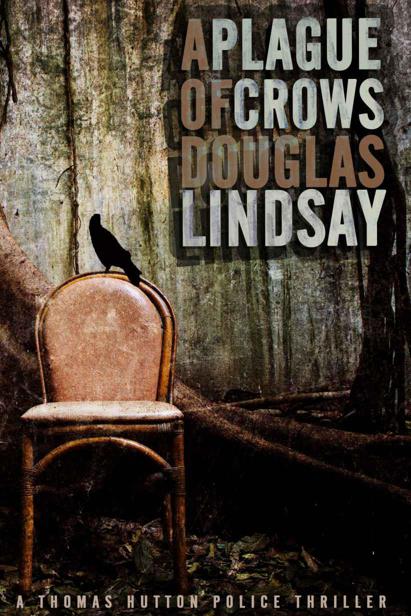 Table of Contents
A Plague Of Crows

All rights reserved. No part of this publication may be reproduced or transmitted in any form or by any means without permission of the author.

Douglas Lindsay has asserted his right under the Copyright, Designs and Patents Act 1988 to be identified as the author of this work.

All the characters in this book are fictitious and any resemblance to actual persons, living or dead, is purely coincidental.

They'd probably have viewed things differently if Detective Inspector Leander had kicked the fuck out of me, rather than the other way round. All right, regardless of the outcome of the manly posturing and handbags that it ultimately came down to, I have to hold my hand up, take responsibility for my own actions, and admit that I was banging his wife.

But surely they would have taken into consideration that he's a workaholic deadbeat loser who had forgotten his wife existed, and that I was only giving her what she deserved… had I not put him in hospital with a fractured jaw, a couple of broken ribs and a punctured lung. And, you know, people make a lot of the punctured lung, but Jesus, lungs get punctured all the time. Guys puncture lungs when they're playing football, and they play on. Break a rib, damned good chance that you'll puncture a lung along with it. God, you've still got another one. How many do you need?

He decided not to sue me, which is something for which I am apparently to be grateful. Well, I wouldn't have had to puncture his lung if he hadn't cracked a bottle of wine over my head. Good thing he hits like a girl.

He had seven weeks off sick. That must have been fun around the house, just the two of them. Maggie running after his every need. They must have had some interesting conversations over the breakfast table.

Under other circumstances I might have felt bad when he confronted me about it. I'm not a completely heartless wanker. I felt some level of guilt about the fact that I was fucking the wife of another guy at the station. But Maggie… if you saw her, you'd know. How could I not? Leander oversnagged. And I mean, seriously oversnagged. I saw a wedding photo of them around the house, and fair enough, on their wedding day they looked kind of natural. Almost like a couple. But over the years he's worked too many hours, suffered too much stress, drunk too much, smoked a few too many God-knows-what, and he's just running to sad middle age; Maggie, on the other hand, is a few years younger, never had kids, works out, doesn't drink, and just keeps getting hotter.

I doubt I'm the only one. Don't care now, didn't care back then. Whatever, I was the one Leander found out about. We were both in the Whale one night, which was stupid, don't know what I was doing in there drinking with all our lot, and getting worse and worse for it. He asks me if I've shagged his wife. I say no, in the drunk kind of way that pretty much says 'Oh yes!' – but I'm thinking,
you know anyway, you sad sack
,
so it doesn't matter
– and then he minces off to a corner to sulk for a while, before coming back and beaning me over the napper with the bottle. Chaos and mayhem ensue.

Chaos, the whining Nancy boy, ended up in hospital with a punctured lung, while Mayhem got nicked. They weren't really ever going to charge me with anything, but they suspended me until I got help with my issues.

She hasn't said anything for upwards of ten minutes. I'm the one who's supposed to be talking, although I haven't opened my mouth since I sat down. I've barely looked at her as that just increases the awkwardness. This isn't comfortable for me. I've no idea how she finds it. She's probably used to people clamming up and going all silent movie on her.

Silent movie? What the fuck? Actors in silent movies didn't sit all sullen and miserable. They overacted like all kinds of shit to compensate for the silence. So I'm not sitting here like I'm in a silent movie, I'm just like everyone else who's been told to go somewhere and who doesn't want to play.

I'm looking at a picture on the wall. A painting. The top half is red, the bottom half orange. I keep waiting for her to ask me what I think it represents.

Does she care that I'm not interested in her psycho-drivel, or does she just see it as easy money? She can sit here doing bugger all for an hour and at the end send a bill for four hundred quid to the police.

I start to wonder if I could be a psychiatrist, and how long the training lasts, and if there are any modules from which they'll make you exempt if you're already a certifiable nutjob.

Sadly I haven't even been certified as a nutjob. I think someone just wrote
pain in the arse
on my file and thought that if they suspended me and made me talk to someone I might become less of a pain in the arse. How was that ever going to happen?

'What do you think it represents?' she says.

Every week I mean to bring a Psychiatrist Bingo card with me, rather than just the one in my head.
My mother. My father. Childhood trauma. Why do you think that is? What do you think it represents?

Time to go. I stand up. I contemplate walking out without even looking at her, but I can't stop myself glancing her way. It's a warm day and she's just wearing a light blouse on top. Open at the neck. I look at her breasts. Small, enticing.

Oh, God... Stop it. Stop doing that thing. It's not about her breasts.

Enticing, for crying out loud. Get a grip.

We look at each other for a moment. It feels like she can read my every thought. She knows I've been playing Psychiatrist Bingo, she knows I just glanced at her breasts, and she knows I liked them and immediately chastised myself for looking and for thinking about it.

Me and my PTSD. That could be the title of my autobiography.
My PTSD And Its Part In My Downfall.

But I'm lying to myself. The whole time I'm lying, because I don't have PTSD.

I have guilt. And I have shame.

I leave, closing the door behind me.

When I'm in town for the weekly psych sessions, I always go to the gym. I punch a bag for an hour, and take a shower. I'm washing the rest of the week, but this is warm water, rather than a testicle-freezing stream at the bottom of a mountain.

I punch a bag, I have a shower, I have a hot meal, and then I get the train back down to Tarbet and walk off into the mountains.

The guys at the station probably think I'm sitting at home, watching sport all day, getting pished and finding myself as many women as possible. But in fact I'm living in a tent, have barely touched alcohol in four months, and spend most of my time wandering the hills and catching dinner. Yep, catching dinner. I can trap, skin and cook a rabbit. That's some ancient fucking skill-set going on right there. When society breaks down, and the infrastructure of the western world collapses, I'm going to be stoked. Everyone else is going to be queuing up for the last box of frozen chicken pieces in Tesco, and stabbing folk in the back to get it, and I'm going to be dining on fresh meat.

In this modern world, there's probably a name for what I'm doing. Everything's got a name. In my head, however, it doesn't have a name. It's just what I'm doing this week. This month. I doubt it'll last into the winter, although I'm not giving Dr Sutcliffe anything on which she could recommend that I be allowed to return to work.

I just don't think they should have suspended me in the first place.

So, I don't know that I'd give what I'm doing a name, as such, but I've lost nearly twenty-five pounds, and I'm marginally less likely to die of a heart attack than I was a few months ago. Off the fags as well. What a fucking loser.

My mobile rings for the first time in over two months as the train pulls into Helensburgh station.

Sitting in the station café waiting for DCI Taylor to get the coffees in. Feeling, as I do most of the time these days, remarkably fresh and healthy. Bright. Sharp as a fucking tack. Haven't had coffee in three weeks, but the boss has come down here for a chat and if I drink water or some sort of fruit smoothie like the twenty-year-old wankers drink, he'll think I've lost it.

He comes back with two Americanos and parks himself across the table. First time I've seen him in three-and-a-half months. Hasn't changed.

Of course he hasn't.

'Out on the hills every day. Windswept.'

'You've got a Scottish tan?'

He shakes his head and looks away. Glances around the café. Checking out the rest of the clientele. I know the look. Making sure there are no journalists. We take a sip of coffee at the same time.

'You're coming back to work,' he says, before he looks at me.

Strangely I hadn't expected that. I hadn't given any thought to why he would get on a train to the other side of Glasgow just to come and see me, so this possibility never entered my head. Not sure what else it was likely to have been, though.

I'm not sure what it is I've been doing the last few months, but I'm not finished.

'You're still getting paid, aren't you?' he says sharply.

Very true. I don't
need
to be living in a tent.

'You start tomorrow morning at eight. I expect you'll spend the night in bed with God knows who, but wherever you lay your hat, you'll need to get out of there in time to get back to work.'

Don't immediately say anything. Another drink of coffee, look at the road outside. Traffic and people. I've grown used to the solitude of the hills.

'Surprised Doctor Sutcliffe thought I was ready,' I say.

Must have fooled her into thinking I was normal by doing what most blokes would have done. You know, by not saying anything. And staring at her breasts.

'Sutcliffe thinks you're so fucked up you're practically retarded. You've buried your past deeper than most war criminals bury the bodies, is what she says.'

Jesus. That didn't take much. Suddenly it's all back there in my head, the thing that I manage not to think about while I'm sitting on a quiet Scottish mountainside, looking out over the hills and lochs, the sea in the distance.

Eightball Boogie by Declan Burke
The Other Half of My Heart by Sundee T. Frazier
Just One Night. Part 1 by Elle Casey
Wings of Refuge by Lynn Austin
Destiny and Deception by Shannon Delany
Ranger's Wild Woman by Tina Leonard
The Marriage Merger by Sandy Curtis
The Tree Where Man Was Born by Peter Matthiessen, Jane Goodall
Frederick's Coat by Duff, Alan
Banana by Dan Koeppel
Our partner