Read A Pocketful of Rye Online

A Pocketful of Rye 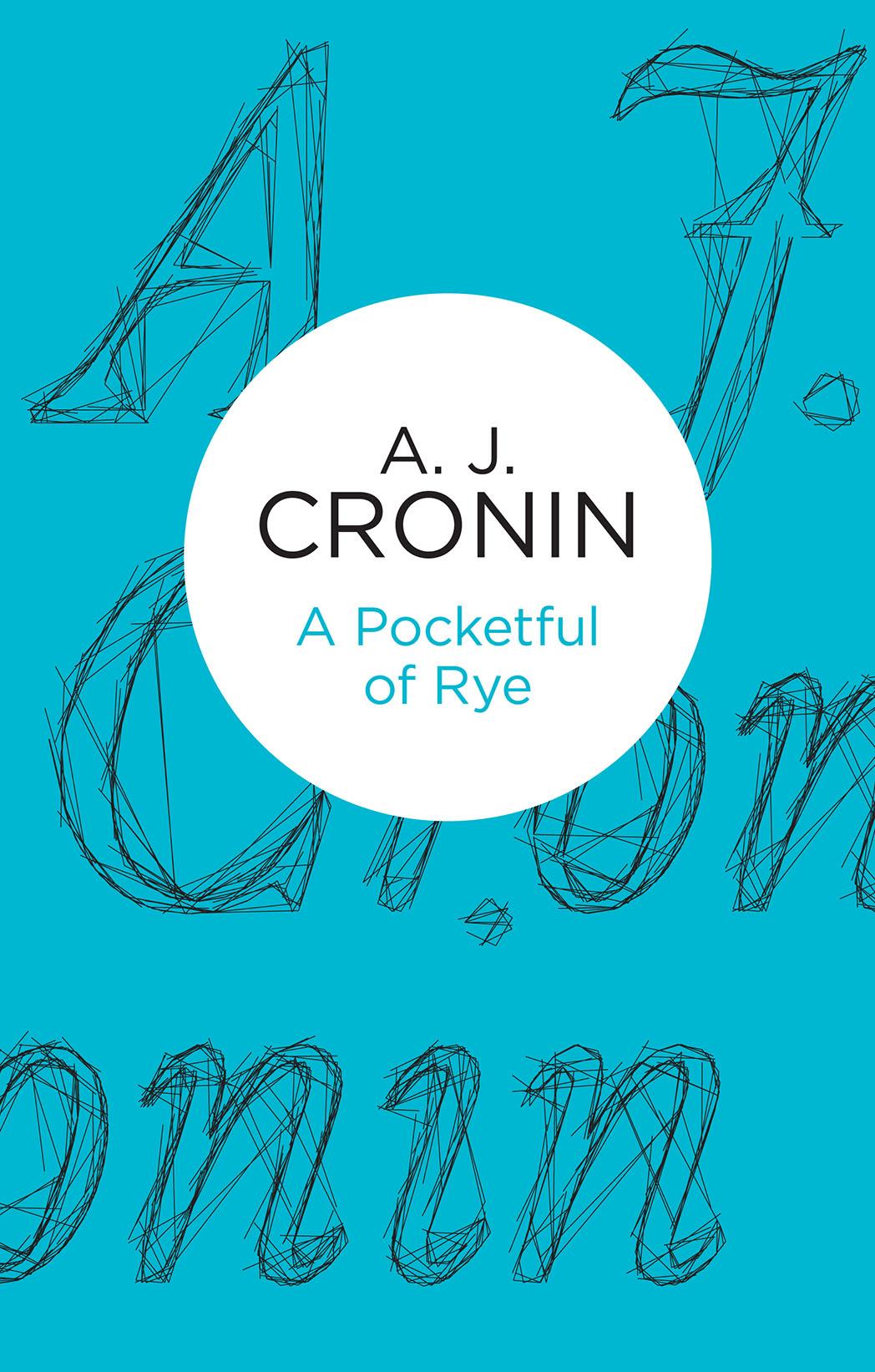 Contents
A. J. Cronin
A Pocketful of Rye

Born in Cardross, Scotland, A. J. Cronin studied at the University of Glasgow. In 1916 he served as a surgeon sub-lieutenant in the Royal Navy Volunteers Reserve, and at the war's end he completed his medical studies and practiced in South Wales. He was later appointed to the Ministry of Mines, studying the medical problems of the mining industry. He moved to London and built up a successful practice in the West End. In 1931 he published his first book,
Hatter's Castle
, which was compared with the work of Dickens, Hardy and Balzac, winning him critical acclaim. Other books by A. J. Cronin include:
The Stars Look Down
,
The Citadel
,
Three Loves
,
The Green Years
,
Beyond This Place
, and
The Keys of the Kingdom
.

The express letter came late in the afternoon.

I was standing comfortably with Matron MÃ¼ller on the terrace of the clinic, putting on my usual act of kindly interest as the children packed into the big green departure coach that would take them through the mountains by the Echberg Pass to Basle for the chartered night flight back to Leeds. It hadn't rained much during their six weeks and the little runts looked well and full of themselves, packing the open side windows to shout
auf wiedersehen
and other picked-up bits of Schweizerdeutsch. They were waving the paper Swiss flags that Matron always handed out with sample bars of patriotic milk chocolate. As the coach rolled down the drive they began to sing âLili Marlene'. They had picked that up too, endlessly playing the old scratched record in the playroom.

âWell, that's the last batch of summer, Matron,' I remarked on a poetic note, as the coach disappeared behind a frieze of firs. â They weren't bad brats.'

âAch, Herr Doktor.' She raised a reproving finger, but fondly. âWhy must you use that wort. Brats. These last were goot children and for me a goot child is the handwerk of Gott.'

âBut Matron,' I improvised quickly, â brat is just an affectionate English idiom. In Britain people of the highest rank will publicly refer to their offspring as brats.'

âSo! A fun affection. An English odium of well-born people.'

Her small eyes approved me indulgently. Hulda MÃ¼ller was a short, thick woman of about sixty, her architecture late Victorian, with a magnificent portico. Thorny grey hair protruded from her white stringed cap, her faint moustache was discreetly powdered. Draped to the heels in the shapeless white gown to which the cantonal nurses were condemned, she was the genuine Schweizer article. Correct, hygienic, humourless, unutterably dull, and while not, in the cheap sense of the word, a snob, imbued with an inherent Germanic reverence for rank. But capable and industrious, a worker fifteen hours a day, coping with shortage of staff in the ward and the kitchen, feeding me as I had never, in my spotty down-at-heel career, been fed before.

âIt is highly agreeable to me that you make explanations of such odiums, Herr Doktor Carroll. You, a person knowing and yourself coming from the
Hochgeboren.
'

âA pleasure, Matron. You'll have all the odium I'm capable of.'

Oh, careful, you clown, don't push it too far. I flashed a smile at her, loaded with charm. In any institution it is the first rule of life to be in with the matron. And since my heaven-sent arrival seven months ago I had worked diligently on Hulda, soaping her with some inspired fictions, creating a few noble ancestors to strengthen my image. So now this fire-breathing old dragon, this veteran of the bedpans, this Hippocratic priestess in a white soutane was entirely mine or, rather, I was hers â her bright-eyed
Junge.

âNow we have the six weeks' pause,' she reflected. âYou will recommence your post-graduates at the ZÃ¼rich Kantonspital?'

âI'll go down at least once or twice a week,' I agreed thoughtfully. âBeginning on Tuesday.'

âAch, it is goot to have the charge of a young, eager, scientific doktor. Our late Herr Doktor was â¦' she shook her head,
âein Schrinker.
'

âNein, aber das ist ein Problem fÃ¼r seine neue Frau.
' The law that married doctors were unacceptable at the clinic thus defined, she examined the watch dangling from her bosom. âBut now I must go to see for your tea.' Moving off she glanced at me archly. âYou like perhaps these ramekins I make special for you.'

âMatron, they're a dream and you â¦ you're a regular “dreamboat”.'

She giggled, not amused, just pleased.

When she had gone I suddenly felt annoyed with myself. In her own way she was kind and decent. And shouldn't I be thanking my lucky star to be here? On velvet at last after eight years of mucking around in the worst kinds of General Practice.

When I graduated at Winton University I had taken a voyage to Australia, as ship's doctor in a cargo boat, then come back all set for the quick trip to Harley Street. It did not take long to demonstrate the financial and professional worth of a low grade Scots degree. Who wants you with that, with the dung of the kail yard on your boots, and the porridge still stuck to your chaps? At first a few locums, one in the highlands with a hard-drinking member of the Macduff clan, then a short assistantship, followed by another locum in the slums of Winton where, half starved, I worked overtime for an obese old sloth who staggered back from his holiday at Glendrum Hydro loaded with the menu cards for every meal, immediately sat down, still drooling all over his paunch, and one by one read them out to me.

Then came a long assistantship in Nottingham with the vague view to a partnership that was never meant to materialize. But why elaborate the sorry record: the long hours in sweaty surgeries, the night calls, the health insurance cards to be faked after hours, the scanty, irregular, over-desiccated meals, the unequal division of labour smugly passed off with: âOh, by the way, Carroll, my wife and I are going out to dinner and the theatre. You won't mind polishing off these three late calls that have just come in.'

And not every wife was taken out to dinner. âI often think I am wasting the best years of my life in Sudsbury, Doctor Carroll. Sidney is so wrapped up in his practice; you must see that â for a young man you are so understanding.' Slipping me an extra slice of scraggy mutton under the mashed potatoes, with a lingering look, while Sidney had his mug in the B.M. J. Poor plump, but fading yearner, I helped you with kind words alone. How could one find romance in those droopy drawers strung out every other Monday in the Sudsbury backyard?

My last stretch hit mud bottom when, as obstetric physician â so called â in a Medical Aid practice in the South Wales Rhondda Valley, knocked up by the mid-wife most nights of the week, staggering out into the shadow world of endless miners' rows half dressed and still half asleep to grope up the ladder to the attic, clash on the forceps and pull, I seemed to be a robot performer, perhaps the cymbalist, in a bizarre symphony of sweat, tears, filth and blood.

It was in the murky dawn after such a night, as I stood on the concrete floor of the central surgery, still in my professional rig of pyjamas, old overcoat and pit clogs, wrapping a bottle of ergot â that panacea for the reluctant placenta â in a disembowelled page from the
Lancet
, that my blood-shot eye was caught by a small strip advertisement on the half-torn page.

I stood there, hypnotized, with a kind of prevision that this was precisely what I needed, wanted, and must have. And yet, as I stared through the dirty dispensary window, hung over by the gallows outline of mine headstocks against the coal tips, I did not fail to comprehend that normally I hadn't an earthly. Nevertheless, a strange feeling had begun to form at the back of my mind that this was no fortuitous intervention in my life, that here was an opportunity specially designed for Laurence Carroll and one which I must take. Compulsively, I sat down and wrote to J. Scrygemour & Co.

The reply came within three days.

The clinic was a foundation from the estate of Mrs Bella Keighley, widow of a wealthy North of England cotton spinner, who had settled in Schlewald with her daughter Maybelle in the year 1896. The daughter was delicate, a consumptive case, consigned for the short span of her life to an Alpine existence. When she died some years later the mother, for sentimental reasons, or from a genuine attachment to Switzerland, had continued her Schlewald domicile, and on her death, under the terms of the will, the large chalet had been extended, a ward of twelve beds and a number of small out chalets constructed and the establishment set up for the benefit of under-privileged British children, âparticularly those suffering from weakness or disorders of the lungs'. The staff consisted of the resident doctor, matron, and probationer nurse.

Six times a year batches of children were received for convalescence or holidays. Those requiring further treatment were retained in the ward.

Two weeks later I went to Halifax for the interview, which took place at the Scrygemour office in Market Street. Naturally I was nervous, yet in view of the preparations I had made, and for which I trust no one will misjudge me, not altogether lacking in hope. Four other candidates were in the waiting-room, not a bad-looking lot, in fact two had London degrees considerably better than mine, but when I sounded them it appeared that, of the four, none could speak. German. So far so good. Before I went in, last, I took a final glance at the old tourists' phonetic phrase book I had found second hand in Cardiff and been mugging up for the past ten days, then tapped respectfully on the frosted panel of the door.