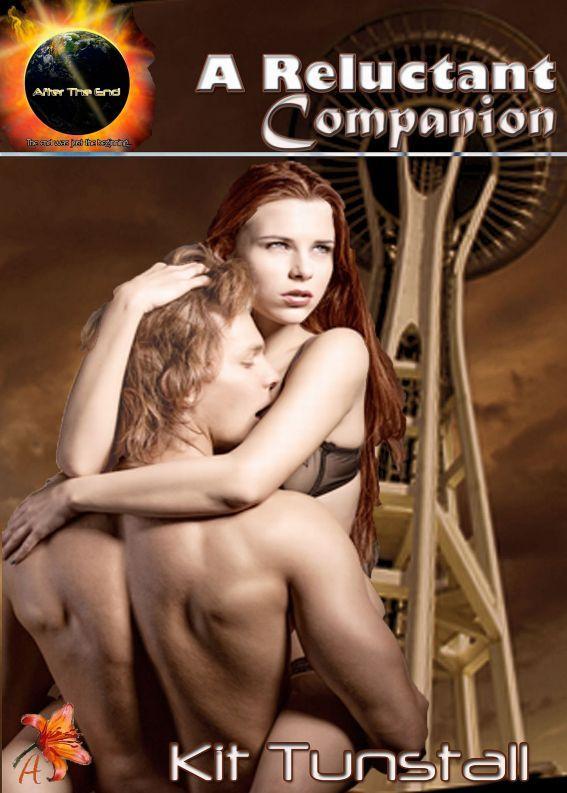 Amourisa Press and Kit Tunstall reserve all rights to A RELUCTANT COMPANION. This work may not be shared or reproduced in any fashion without permission of the publisher and/or author. Any resemblance to any person, living or dead, is purely coincidental. All characters engaging in sexual activity are over the age of 18.

When electricity is a scarce commodity, power is everything…

A century ago, a catastrophic event disabled most electronic devices and killed hundreds of millions in the ensuing chaos. After The End, governments eventually reformed, but countries split into smaller factions. The United States is long gone, replaced by ten distinct territories. Commander Tiernan Archer rules the Northwest Federation, where Madison Cole has lived all her life. Her beauty enchants him, and he requests her as a one-night companion. Madison has an amazing night with the commander, but is dismayed when he wants her to be his personal companion and return with him to Seattle-Archer. Her family needs her, but he gives her little choice about becoming his reluctant companion.

At first, it seems impossible that she could ever be happy with the man who forced her to give up her life, but feelings grow between them. Their relationship reaches a fragile new level that could deepen to something neither expected, if betrayal and treason don’t separate the lovers.

Madison paused in the process of wrapping baling wire around the fence post, suddenly sure she could feel someone’s gaze on her. She looked up from her task, seeing no one in front of her in the rows of grapes. The hiss of a steam engine made her jump, and she spun to find the source. It was out-of-place, since there were only a few steam cars in the entire province, and none of her neighbors owned one.

The sunhat she used to shield her face also blocked her view, so she swept it off with one hand, using the other to shove the sweaty locks of gold-red that cascaded downward up and out of her face. Cupping her hand over her eyes, she had enough shade to make out the insignia on the door of the car. Arching a brow, she wondered what the governor of their province was doing out this far from the center of the village. Tom Blaney had no reason to leave Graceport to visit the wineries in the outlying areas. It wasn’t tax time, and he didn’t seem to care much about the people living under his governance unless they could do something for him.

With a shrug, she returned to the job of repairing the goats’ fence. They provided milk that was crucial for survival, but if they got loose in the grapes, it would be disaster for everyone in the Cole household. The disquieting sensation of being watched persisted until the car finally started up and drove on down the hill a few minutes later. Releasing a breath she hadn’t known she’d been holding, Madison put down the wire cutters and moved on to reinforcing the next weak section of the wood, thinking no more about the incident until much later in the day.

It was late afternoon by the time she returned to the main house, a modest ranch-style built at least one hundred years before. Her great-grandparents had struck it rich in something called stocks—which she didn’t think referred to cows or other livestock—and had bought the winery as their weekend getaway. After The End, it had become their permanent retreat and had allowed them and their descendents a chance to survive and start over in the new world.

What had once been a charming, quaint building kept in pristine condition had now fallen into age-related disrepair. Materials weren’t easy to acquire. Had they been, it was still a losing battle. The house was built at the end of the first decade of the twenty-first century and hadn’t been designed to withstand a century of hard living. For some reason, she noticed the house’s flaws today, wincing at the sagging porch and stairs, the peeling paint, and the missing shingles on the roof.

The sound of a horse neighing around the side of the house startled her, sending all futile musings about house repair flying from her mind. Biting back a sigh, she dropped her toolkit in the dust by the house, mentally hoping none of her neighbors had stopped by for a visit. After a long, hot day working in the sun, she wanted to fill the tub with a few buckets of tepid water and soak until the water turned ice-cold—which should take about an hour in the lingering heat of summer.

As she rounded the house, the horse came into view. No, more than one. Four? Her first thought was the Evans family had stopped by in a not-so-subtle attempt to mooch an evening meal. Almost immediately, she dismissed the thought, knowing they didn’t own horses. Having one horse was doable for most families, but four would be a luxury outside the means of the folks in the Yakima-Grace province.

Wearing a frown, she straightened her homespun cotton shirt as she stepped onto the front porch. At least the boards here didn’t sag as much as they did around the side of the house. With a cursory wipe on the rag rug to remove dust from her boots, Madison opened the screen door and entered her house.

It took a second for her eyes to adjust to the dimmer interior, and she couldn’t stifle a gasp when she recognized the forms of four soldiers standing awkwardly in the kitchen, with her mother standing in front of the pot-bellied stove, clearly waiting for the cast iron teakettle to boil.

What did Blaney’s people want? She knew they’d surrendered their required allotment of grapes and wine to cover their annual taxes, because she had helped pack and load it herself. As she rushed to her mother’s side, intent on sending Elaine to sit down at the shabby table, she realized it wasn’t the gray uniform of the local province soldiers. These men wore the black and silver uniform standard to the Commander’s army, stationed in Seattle-Archer. What had been anxiety suddenly escalated to pure terror. Why would the de facto president of their region send troops to their modest home? When these soldiers came, people disappeared.

Swallowing down the lump in her throat, she put an arm around her mom’s waist and led her to the table, saying, “You shouldn’t be out of bed, Momma.”

Elaine summoned a wan smile. “I couldn’t be rude to our guests.”

Shooting a baleful glance at the one who appeared to be in charge of the small group, she said, “I can imagine.” No doubt they had pounded on the door, threatening to break it down unless her mother opened up. Patting Elaine’s shoulder, she said, “I’ll handle it now.”

The teakettle whistled as she turned from her mother, and she took a moment to take it off the stove before spinning around to confront the soldier standing slightly apart from the others. “Why are you here?”

If he found her tone disrespectful, it didn’t show in his expression. He straightened slightly. “Commander Archer would like you to be his companion for dinner this evening.”

“Me?” The word was almost a squeak, and she had to clear her throat before continuing. “I’m sorry, but I think you have the wrong house or something. I don’t know the commander.”

A small frown disrupted his bland expression. “You are Madison Cole?”

With a bit of hesitation, she nodded.

He inclined his head just once. “You are the guest we have been sent to fetch, Miss Cole.”

“This makes no sense. I’ve never even seen…” She trailed off, remembering the eerie feeling of being watched earlier. Had the commander been in Blaney’s car? A shiver raced down her spine at the thought of the ruler of the Northwest Federation spotting her and deciding to have her for the evening. She wasn’t naïve enough to think dinner was the only thing he expected.

Clearing her throat again, she said, “Please tell the commander I thank him for the honor, but I really can’t leave. My brother and father on a supply run, and my mother is ill. I couldn’t possibly leave her and my little sister here alone.”

The soldier lifted a single dark brow. “You want me to tell Commander Archer you said no?”

“Because you don’t decline an invitation with the commander.” He ran a hand through closely cropped black hair, introducing a note of dishabille into his previously crisp appearance. “I can’t. You have to come with us. The consequences of doing otherwise…” He trailed off, looking pained.

Fear heightened another notch, making it difficult to breathe. As much as she wanted to keep protesting, a glance in her mother’s direction showed her Elaine was getting worried. The last thing her mother needed was to have this confrontation happen in her presence, where she would feel the need to stand by her daughter. If Elaine thought she didn’t want to go, her mother might do something crazy, like go for the hunting rifle. Sick as she was, her mother bear instincts were still strong.

Taking a deep breath, trying to diffuse the palpable tension, she managed a small smile. “In that case, I need a few minutes to change clothes.” Perhaps she could escape out the window and flee into the fields? It was a feeble plan, but at least it would get her away from the house and her mother’s concerned presence.

He shook his head. “That won’t be necessary. It’s a rough ride back into Graceport, and you’ll have an opportunity to freshen up before dinner.”

Clinging to the idea of squeezing out her bedroom window, she said, “But I’ll need something to wear after I freshen up.”

Once again, he shook his head. “Something will be provided, Miss Cole.”

Disappointment settled like a lead weight in her chest. Once she was riding with the soldiers, there wouldn’t be a chance to flee. After her arrival at Graceport, she’d likely be surrounded by Archer’s entire security force, making escape impossible. Was there no way out of the “honor” of sharing the commander’s bed for a night? “How thoughtful,” she managed to say in a dry voice.

She shook her head, not bothering to tell them her father and brother had taken Hack on their trading trip. They were due back in two days, and she wondered if she could somehow keep them from finding out about her pending humiliation after the fact. Squaring her shoulders, she decided not to be so defeatist. There would have to be a way to escape. She just had to remain alert and not hesitate to seize the opportunity when it arose.

She ended up riding double with the soldier who had insisted she accompany them. He maintained a polite distance between them and engaged in meaningless small talk that required little conversation on her part. That was a blessing, because her mind was too preoccupied with the looming ordeal. Despite her determination to remain on-guard for an out, she couldn’t help her thoughts turning inward to dwell on what the evening might bring.

Although many girls her age were already wives or mothers—and had no doubt been lovers to men before marriage—she was still innocent at twenty. Her parents had tried to shelter her and protect her from harm. It was impossible to grow up around animals and not know what sex was, but she had always heeded her mom’s advice to wait until someone special came along. This commander was as far from special as she could envision. What awaited her was surely akin to rape, maybe even outright violent violation, depending on his proclivities.