Read A Rogue by Any Other Name Online

A Rogue by Any Other Name 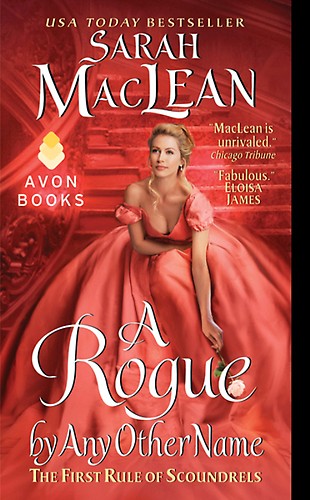 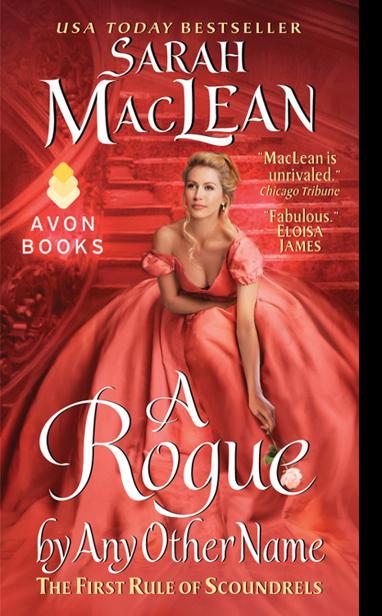 A Rogue by Any Other Name

sister where it counts.

T
he eight of diamonds ruined him.

But it was the eight.

The young Marquess of Bourne watched the card fly across the lush green baize and slide into place next to the seven of clubs that lay face up on the table, teasing him. His eyes were already closing, the air was already leaving the room in a single, unbearable rush.

One more than the
vingt et un
on which he had wagered.

On which he had wagered everything.

There was a collective gasp in the room as he stayed the movement of the card with the tip of one finger—as bystanders watched the horror unfold with the keen pleasure of those who had narrowly escaped their own demise.

The chatter started then.

“He wagered it all?”

“Everything that wasn’t entailed.”

“Too young to know better.”

“Old enough now; nothing makes a man faster than this.”

His eyes opened, focusing on the man across the table, meeting the cold grey gaze he had known his whole life. Viscount Langford had been a friend and neighbor to his father, handpicked by the former Marquess of Bourne as guardian to his only son and heir. After Bourne’s parents’ death, it had been Langford who had protected the Marquessate of Bourne, who had increased its holdings tenfold, ensured its prosperity.

And then taken it.

Betrayal scorched through the young marquess. “You did this on purpose.” For the first time in his twenty-one years, he heard the youth in his voice. Hated it.

There was no emotion on his opponent’s face as he lifted the mark from the center of the table. Bourne resisted the urge to wince at the arrogant scrawl of his signature across the white page—proof that he’d lost everything.

“It was your choice. Your choice to wager more than you were willing to lose.”

He’d been fleeced. Langford had pressed him again and again, pushing him farther and farther, letting him win until he couldn’t imagine losing. It was an age-old ploy, and Bourne had been too young to see it. Too eager. Bourne lifted his gaze, anger and frustration choking the words. “And your choice to win it.”

“Without me, there would have been nothing to win,” the older man said.

Langford took his time folding the mark and rising from the table, ignoring his son. Instead, he leveled Bourne with a cool look. “You should thank me for teaching you such a valuable lesson at such a young age. Unfortunately, now you’ve nothing but the clothes on your back and a manor house empty of its contents.”

The viscount cast a glance at the pile of coins on the table—the remainder of his winnings from the evening. “I shall leave you the money, how’s that? A parting gift, if you will. After all, what would your father say if I left you with nothing?”

Bourne shot up from his chair, knocking it back from the table. “You aren’t fit to speak of my father.”

Langford raised an eyebrow at the uncontrolled display, and he let silence reign for a long moment. “You know, I believe I shall take the money after all. And your membership to this club. It is time for you to leave.”

Bourne’s cheeks flamed as the words washed over him. His club membership. His land, servants, horses, clothes, everything. Everything but a house, a few acres of land, and a title.

A title now in disgrace.

The viscount lifted one side of his mouth in a mocking smile and flipped a guinea through the air toward Bourne who instinctively reached out, catching the gold coin as it glinted in the bright lights of White’s card room. “Spend it wisely, boy. It’s the last you’ll have from me.”

Langford turned on him. “Not another word. I won’t have you begging for him.”

Bourne’s oldest friend turned sad eyes on him, lifting his hands in a sign of helplessness. Tommy needed his father. Needed his money. His support.

Things Bourne no longer had himself.

Hatred flared hot and bright for the briefest of moments, before it was gone, extinguished by cold resolve, and Bourne placed the coin in his pocket and turned his back on his peers, his club, his world, and the life he had always known.

H
e did not move when he heard the door to the private room open and close quietly.

He stood in the darkness, silhouetted by the painted window overlooking the main room of London’s most exclusive gaming hell. From the club floor, the window appeared as nothing but a stunning work of art—a massive piece of stained glass depicting the fall of Lucifer. In brilliant hues, the enormous angel—six times the size of the average man—tumbled toward the pit floor, cast into London’s dark corners by Heaven’s Army.

A reminder, not simply of the name of the club, but of the risk that those who entered took as they set their marks to the plush baize, as they lifted the ivory dice, as they watched the roulette wheel turn in a blur of color and temptation.

And when The Angel won, as it always did, the glass reminded those who lost of how far they had fallen.

Bourne’s gaze flickered to a piquet table at the far end of the pit. “Croix wants his line increased.”

The pit manager did not move from his place just inside the door to the owners’ suite. “Yes.”

“He owes more than he will ever be able to repay.”

Bourne turned his head, meeting the shadowed gaze of his most trusted employee. “What is he willing to place against an extended line?”

Bourne watched the lord in question, who was sweating and twitching nervously as he waited for judgment to be passed.

“Extend the line. When he loses, see him out. His membership is revoked.”

His decisions were rarely questioned, and never by the staff of The Angel. The other man headed for the door as quietly as he had entered. Before he could leave, Bourne said, “Justin.”

The soft click of door meeting jamb was the only indication that the pit manager had been there at all.

Moments later, he came into view on the floor below and Bourne watched the signal travel from boss to dealer. He watched as the hand was dealt, as the earl lost. Again.

There were those who did not understand.

Those who had not gambled—who had not felt the thrill of winning—who had not negotiated with themselves for one more round, one more hand, one more shot—
just until he hit one hundred, one thousand, ten thousand
. . .

Those who had not known the luscious, euphoric, unparalleled feeling of knowing that a table was hot, that a night was theirs, that with a single card, everything could change.

They would never understand what kept the Earl of Croix in his chair, betting over and over and over again, fast as lightning, until he’d lost everything. Again. As though nothing he had wagered had ever been his to begin with.

Justin approached Croix and spoke discreetly into the ruined man’s ear. The peer shot to his unsteady feet, outrage furrowing his brow as anger and embarrassment propelled him toward the manager.

Bourne could not hear what was said. He did not need to. He’d heard it hundreds of times before—watched as a long list of men had lost first their money, then their temper with The Angel. With him.

He watched Justin step forward, hands raised in the universal sign of caution. Watched as the manager’s lips moved, attempting—and failing—to settle and calm. Watched as other players took note of the commotion and as Temple, Bourne’s massive partner, headed into the fray, eager for a fight.

Bourne moved then, reaching toward the wall and pulling a switch, activating a complex combination of pulleys and levers, triggering a small bell beneath the piquet table and drawing the attention of the dealer.

Notifying him that Temple would not have his fight that evening.

Bourne would have it instead.

The dealer stayed Temple’s impossible strength with a word and a nod toward the wall where Bourne and Lucifer watched, each willing to face whatever came next.

Temple’s black gaze fell on the glass, and he nodded once before leading Croix through the throngs of people below.

Bourne descended from the owners’ suite to meet them in a small antechamber set apart from the main floor of the club. Croix was cursing like a dockside sailor when Bourne opened the door and stepped inside. He rounded on Bourne, gaze narrowed with hatred.