Read A Solitary Romance: Book 1 in the Only Love Series Online

A Solitary Romance: Book 1 in the Only Love Series 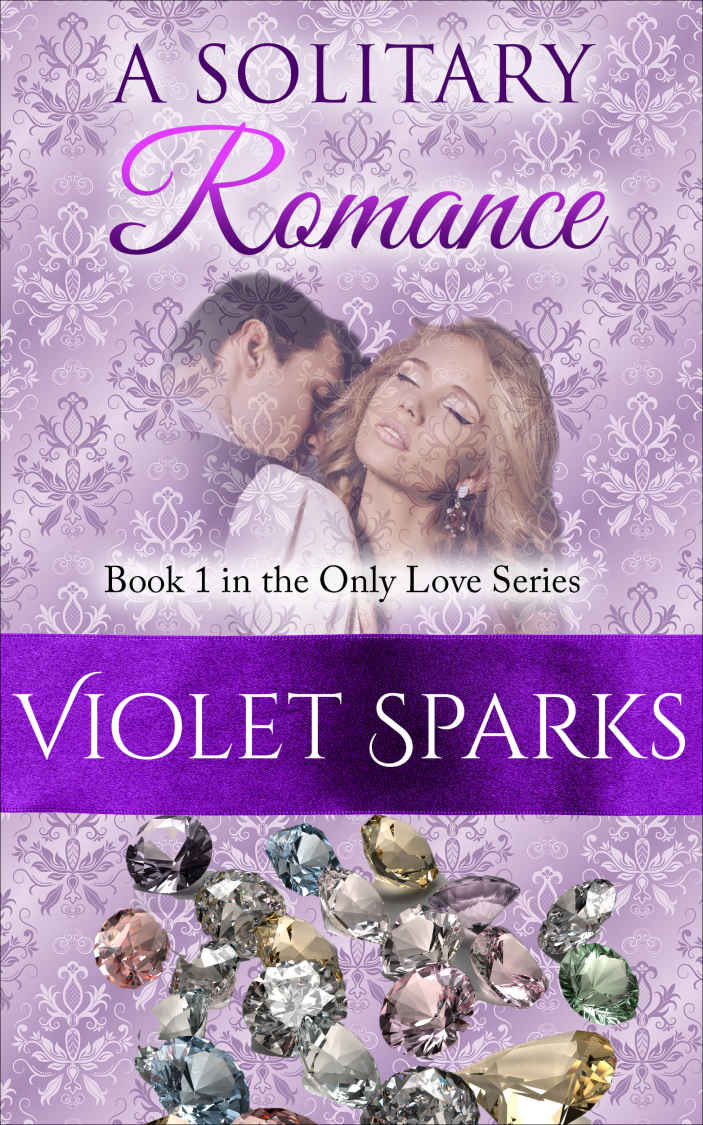 All rights reserved.  No part of this publication may be reproduced in any form without prior written consent of the copyright holder.  This book is a work of fiction.  Any resemblance to actual persons, living or dead, or actual events is entirely coincidental.   Names, characters, businesses, organizations, places, events, and incidents are the product of the author's imagination or are used fictitiously.  Although some locations and businesses named may be real, any events involving them are fictional.

Violet Sparks pulls from her career in corporate America, her time at a major auction house, and her love of all things
girly
when penning her romance novels.  She won writing contests as a teen and always dreamed of becoming an author.  A fan of the arts, Violet created one-of-a-kind gift items, sold in shops throughout Southern California, before raising a family.  She met and married the man of her dreams and they now have two young children.   Violet has a zeal for vintage costume jewelry, literature, museums, and travel.  She writes a blog about her other passions under a pen name.

Chapter 3 -Too Much Excitement for One Girl-

Chapter 4 -A Changing of the Guard-

Chapter 8 -Finding the Perfect One-

Chapter 15 -The Big Night Gets Even Bigger-

Katrina Crimshaw concentrated on the paragraph before her.  Researching an obscure Asian investment vehicle for her boss required all her mental prowess.  The only person seated at the long wooden table, she'd placed her belongings to each side and gotten comfortable.  A commotion at the reference desk disrupted her focus as she glanced up from the pink pages of
The Financial Times
to see what caused the hubbub.

Her gaze locked on the dark eyes of a familiar face, and her heart stopped.  She knew that man.  It had been seven years, but he hadn't changed much.  Katrina tried to still the inner tremble that ran through her.  She quickly dropped her lids and pretended to study the periodical on the table, inhaling long, slow breaths even as her pulse quickened.

The Business and Commerce collection at the Los Angeles City Library still drew a crowd, even in the days of the internet.  She'd begun researching stock prices, inflation rates, and monetary conversions there, straight out of college.  Sometimes, she still popped in at the end of the day to mingle with former coworkers, and study up on her current clients' needs.  A familiar gang met here before drinks, or dinner, or just to stave off a lonely evening.

Katrina felt as if Robert's eyes bored holes through her, and she could not resist taking a second look.  Even after all these years, the auditor could feel when his eyes fastened on her.  She raised her gaze, and sure enough, he was closing on her, smiling.  He stopped, meeting her stare, and waved.  She noticed another acquaintance, Mike Johnson, tiptoeing behind Robert with exaggerated steps.  A big prankster, Mike was up to something.  She flicked her index finger in the trickster's direction as a warning gesture, then glanced back at her research.  She heard a hushed greeting between the two men, back slaps, and laughter.  A few minutes later, someone sat in the chair across from her.

"Kate, it's so good to see you," Robert said, his voice filled with enthusiasm and warmth.

Shocked he remembered her name, she lifted her head and feigned surprise, trying to hide the reaction his deep voice provoked.

"It's Robert, Robert LaSalla, from Wood and Associates.  Remember, we worked together on the Capital Bank deal?" he said, a broad smile stretching across his face.

She'd never forget.  The state of California had seized a large insolvent bank and hired a force of accountants to inspect the institution's records.  The state considered everyone contract workers, so they earned no benefits, but the pay proved exceptional.  She committed to a two-year stint, meeting all the on-the-job experience required to obtain her CPA license.  Robert LaSalla, Mike Johnson, and numerous other young accountants worked the Capital Bank audit.  Robert was a few years older, and something about him had always intimidated her.  The inspection was the first job after college for Katrina and Mike.  Wood and Associates, the employment firm who supplied contractors to the state, hired many fresh kids new to the job market.

"Yes, of course.  It's nice to see you, Robert."  She concentrated on keeping her voice and breathing steady, but could not control the corners of her mouth as her lips curled into a smile.

"Thanks for the warning back there.  I think Mike hoped to pin a
Kick Me
sign on my jacket or put gum in my hair," he said with a laugh.

Her heart raced as she released a nervous giggle.  His demeanor reflected none of the Lothario she recognized seven years prior.  Maybe he left that behind in his twenties.  Tan, with a few laugh lines around his eyes, he seemed genuinely glad to see her.  His amiable expression projected that he considered her a long-lost friend.  She couldn't help but notice how his muscular frame filled out his suit.  Well over six feet tall, he could appear imposing.  He kept his thick, almost black hair, cut short on the sides, but it still had length on top.  She'd like to run her fingers through those locks.  His large, dark eyes danced behind his trendy, rectangular shaped, black-framed glasses.
Those
were new.  Katrina became aware of a tightness in the muscles around the corners of her mouth.  She'd been smiling adoringly at this man.

"You're not still with Wood, are you?" he asked.

She stifled a small laugh and shook her head.

"No, I've had two or three jobs since then.  How about you?  Where do you work?"

It was his turn to chuckle.

"Well, as my dad would say, I'm between jobs right now."

He didn't appear unemployed.  The man looked prosperous and like he hadn't a care in the world.  When he entered the library, the pretty reference desk girl had left her counter to ask if he needed help.  A successful female attorney also took note, leaving her study carrel to attend to Robert's needs.  His presence caused the commotion that drew her attention from her research.
That
much
had not changed in the interim since she'd seen him last.

Katrina took note of every detail of the man's face and didn't pay attention to his words as he chatted away.  She heard the terms
mom
,
dad
, and
parents
mentioned, but nothing else registered.  She wanted to memorize every aspect of his countenance while she had the chance.  Family held importance for him, she realized.

"Do you want to grab some dinner?  Catch up on old times?"

Never in her wildest dreams had Katrina imagined she'd get a dinner invitation from Robert LaSalla.  Working with him as a shy twenty-one-year-old had been daunting enough.  Back then, she could barely get up the nerve to look at him or mumble a few words when the job required it.   They'd been assigned side by side workspaces, so she saw him most days.  When they first met, he had a seriousness about him that didn’t lend to casual conversation. That didn't stop their female coworkers.  Women had flocked around him non-stop and he enjoyed the attention.  She determined right away that she would never chase after a man like that, and tried to ignore him as much as possible, or at least give the impression she was unaware of his presence.  Her pounding heart always let her know the act was a sham.  Now, caught off guard by his offer
and
her runaway pulse, she tripped on her words.

"Uh, oh, thank you, but I, uh, already have plans.  It was nice to see you again, though." She rushed through her last words and rose from her chair, collecting her notes and briefcase before standing and daring to look at him once more.
He must not find out how he affects me
.  Katrina gave the man a feeble smile and hurried from the room.

"Good night, then," Robert called as she opened glass doors leading to the library's grand foyer and main desk.

Fresh air rushed into the reading room and cooled the blush on Kate's face.  From the corner of her eye, she saw the pretty red headed attorney rise from behind her study stall.  Mr. LaSalla wouldn't be alone for long.

Back in her apartment, she kicked herself.  "Why didn't I just say yes?" she asked aloud.  Katrina knew the answer, but chose to ignore the hurt that still stung from a broken engagement in college.  When Rod began pursuing her as a Sophomore, she couldn't believe her good luck.  Tall, handsome, and a
BMOC
, he didn't take long to woo her.  Engaged after their junior year, she expected her last semesters at the university to be almost heaven.  She'd even begun planning the wedding.  Unfortunately, Rod was not the man he appeared.  She felt forced to break off the engagement when she caught him with another girl.  Planning a birthday surprise, she had let herself into her fiancée's apartment with the key he kept hidden under the mat, and discovered him
in flagrante delicto
with a cheerleader.  He didn't even come after her when she ran from the building.  Later, she learned other disturbing facts about her ex-fiancée.  Still, the episode left her damaged and humiliated.  Rod's parents attempted to patch things up between them, and having to break ties with his loving family provided another level of pain and layer of scars.

Her own mother had died without warning the summer before she left for college.  It turned out that Katrina's mom had a rare brain tumor, undiscovered until her passing.  Her father insisted his only daughter undergo a battery of exams to see if she, too, had the condition.  He feared she might be genetically predisposed, since on rare occasions, she fainted.  A tense time of waiting ensued, but the test results cleared her of any worries.

Rod's mom, Lillian, had stepped into her mother's role when the couple became engaged.  Her ex-fiancée's father had been wonderful as well.  Healing from the heartbreak proved difficult.  She still caught glimpses of Rod and his beautiful wife on television, lurking in the background while his clients walked the red carpet at events.

Katrina flipped open her laptop and began typing.
Today I met the man of my dreams . . .   again
.  Her blog had gained momentum over the last two years.  She wrote about her passion— jewelry, particularly antiques.  Research had always been her strong suit, and while she didn't find accounting particularly fulfilling, it paid the bills.  A collector of vintage costume pieces, she dreamed of and blogged about the real thing.  She'd amassed a fine collection of photos, and over two thousand people awaited her witty and insightful posts each week.  Once, between jobs, she'd even landed a position at one of LA's biggest auction houses, working sales day and night when precious baubles went under the hammer.

She cleverly segued from a description of Robert LaSalla,
Man of My Dreams
, to what a girl looks for in an engagement ring, adding pictures of fabulous examples from the past.  After arranging photos of unique, vintage multi-carat solitaire rings, she proofread her post.  A few graphics later, Katrina pushed the
Publish
button on her screen.  She had skipped last week's Violet Sparks article, and fans had been clamoring to hear from her.  She adopted the unusual pen name, inspired by the purple fire she observed in the stones of a tiara at an exhibition of Russian jewels. No one knew of her writing, except her friend, Kiki.