Read A State of Jane Online

A State of Jane 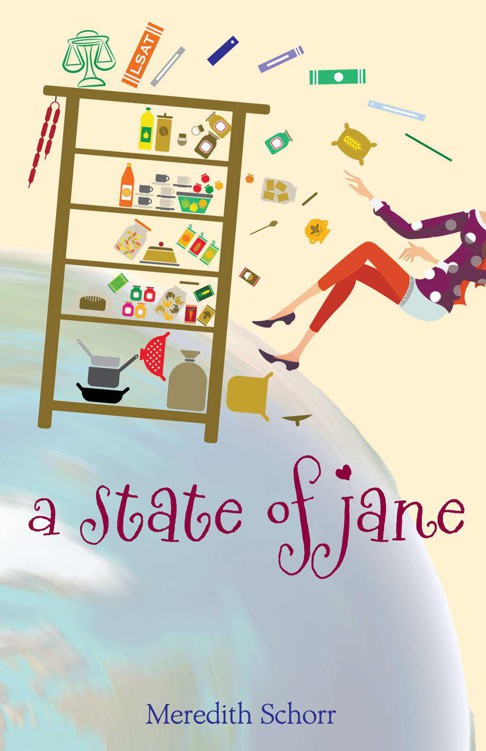 PRAISE FOR
A STATE OF JANE
BY MEREDITH SCHORR

“By turns heartbreaking and hilarious in its honesty,
A State of Jane
is Chick Lit at its indisputable best. With a self-assured talent for drawing vivid, relatable characters and a keen ear for witty dialogue, Meredith Schorr once again delivers a richly-layered story that will enthrall and surprise even those readers who believe they've read everything Chick Lit has to offer.”

“Don't pick up
A State of Jane
unless you're ready to pull an all-nighter and call in sick to work--this is an addictive, read-it-in-one-sitting kind of novel that you'll want to pass along to all your friends. In her second book, Schorr proves herself as one of the funniest, most skillful writers on the chick lit scene.”

—Diana Spechler, author of
Who By Fire
and
Skinny

Amazon, the Amazon logo, and AmazonEncore are trademarks of
Amazon.com
, Inc., or its affiliates.

This title was previously published by Booktrope; this version has been reproduced from Booktrope archive files.

The publication of
A State of Jane
would not have been possible without the help and support of the following people:

First and foremost, I'd like to thank my family for always believing in me and especially my sister Marjorie for being my first beta reader and giving her honest opinion (even when it wasn't what I wanted to hear). Special thanks to my friends for never tiring of hearing about my publishing journey (or at least doing a convincing job faking interest). Honorable mentions go to Alan who has now read two “chick” books, both written by me; Jenny, my soul sister and sounding board; Ronni, my forever friend and third sister; Abbe, Megan, Shanna, Alissa, Dee and everyone else in my social circle for being awesome and consistently making my world a fun place to live; and Jason, for buying my first book within twelve hours of meeting me, providing constant support and encouragement and proving that not all men are flakes.

I also wish to thank my editor, Gabrielle Roman for appreciating my sense of humor and voice but also finding holes in the manuscript and helping to fill them. Thank you to Diana Spechler for your brilliant book-doctoring; Natalie Aaron for helping with my query letter to Booktrope and commiserating over the stresses of being a writer; and Tess Hardwick for generously agreeing to refer me to Booktrope. Thank you to the entire staff of Booktrope for turning my second novel into my second published novel.

Finally, this book would not be possible without all of you flakes out there. I dedicate this book to you.

HOLDING THE PHONE AGAINST MY EAR with my shoulder while I painted my toenails with OPI's
That's Hot Pink
, I said to my sister, “Wish me a happy anniversary.”

“Happy Anniversary, little sister.” Claire was only seventeen months older than me, practically my Irish twin, but she always insisted on referring to me as her “little sister.” “May I ask what anniversary you're celebrating?”

“My first one. And hopefully my last.”

“My first anniversary as a single person. It's been exactly a year since Bob and I broke up and I'm officially ready to fall in love again.” I looked toward my computer screen where my eHarmony profile was twenty-eight percent completed.

A hint of doubt in her voice, Claire questioned, “Cuz it's been exactly a year?”

“Precisely. Three hundred and sixty-five days!” I was not going to let Claire's teasing get to me. I knew by waiting a year, I'd be less likely to waste my time in a rebound relationship.

“Only you would actually think a few days give or take would make a difference,” Claire said, giggling.

“Ha ha, Claire. Laugh all you want. Laugh all the way down the aisle you'll walk down as my matron of honor!”

Still laughing, Claire asked, “So who do you intend to have this new relationship with?”

“Someone amazing! I just have to find him. Could be anywhere – eHarmony, subway, bar, work. In fact, a new set of first-year associates is starting this week!” I bit my lip. “Although if they started law school right after college, they might only be twenty-five.” Not everyone worked as a paralegal first like me.

“And that's a problem because?”

“I'm twenty-six! I'd rather date someone older. Or my age.” Thirty would be perfect since men matured less quickly than women. A four-year age difference might mean we'd be ready to settle down at the same time.

“It's a one year difference, Jane. Keep your options open.”

I blew on my toes, willing the polish to dry faster. “I hate when you do that, you know.”

“Do what?” Claire asked innocently.

Claire sighed loudly. “You're not in high school anymore, Jane, and guys in New York are not gonna fall at your feet.” Laughing, she added, “Except the really short, nerdy ones with balance problems. Just don't expect to meet Dr. Right who looks like Eric Bana. It ain't easy and you've got lots of competition.”

When I met Bob the summer between our sophomore and junior years in high school, we were co-counselors for the same group of seven-year-old boys. We became good friends but when I told Claire I had a crush on him, she said I'd never have the guts to make a move and should just use his friendship as practice for talking to guys. “As always, thanks for the uplifting pep talk. And it's not as if guys fell at my feet in high school either. Bob was my first boyfriend, remember?”

Softening her voice, Claire said, “Sorry if I sounded mean. You're a definite catch, sis. You're just naïve and I don't want you to be unprepared. You understand, right? Just go in with no expectations, OK?”

“OK,” I said softly. I had hoped Claire would share my excitement, not give me unsolicited advice.

Her voice brighter, Claire said, “So, you do realize that you'll need to actually go on dates, right? Which means no more back-to-back episodes of
The Barefoot Contessa
and
Iron Chef
on The Food Network on Saturday nights.”

“It's not like I'm a hermit, Claire. I just wanted to make sure I gave myself enough time to move on after a nine-year relationship.” The fact that I broke up with Bob and not the other way around didn't make the split any less traumatic. Well, probably not
that
much less traumatic anyway. On a positive note, I'd learned a lot of new recipes over the past year. “Anyway, I'm ready now.”

“I'm sure you are. Just please don't expect things to be as easy as they were when you met Bob. The dating world post-millennium is an entirely different animal and you're dealing with experienced men, not innocent boys. It might not be as easy to meet another Bob. Just ask Pin Cushion.”

Pin Cushion was my sister's nickname for my far from virginal roommate, Lainie, and she was the last person I'd ask for relationship advice. Birth control advice, maybe.

“I'll just be myself and things will happen. Just like they eventually did for you.”

Claire let out a deep exhale. “Eventually is the operative word. And now we can't make a baby to save our lives.”

I remembered when Claire had dyed her dirty blonde hair jet black when she dated a drummer in college and how she gave up meat when she dated a vegetarian. She wound up married to Kevin, another high school teacher from the suburbs who, ten times out of ten, also chose cheeseburgers over tofu and soy milk. They were a perfect match, but baby making had proved to be challenging. “It will happen when it's supposed to, Claire. I truly believe that.” Secretly, I wished it would happen already since I couldn't wait to buy cute baby clothes for my little niece or nephew.

“My advice to you – take your own advice. It will happen when it's supposed to happen. Don't look at every guy as the potential ‘one.’”

“Not every guy, Claire! Just the single, handsome, ambitious, generous, funny ones!” Just then, a message popped up on my computer that my session on eHarmony was going to timeout if I remained idle for another sixty seconds, so after I told Claire I loved her and would cross my fingers that she didn't get her period that month, we hung up and I finished my online profile. I couldn't wait to be matched with someone with whom I was compatible on twenty-nine dimensions!