A Tale of Two Pretties 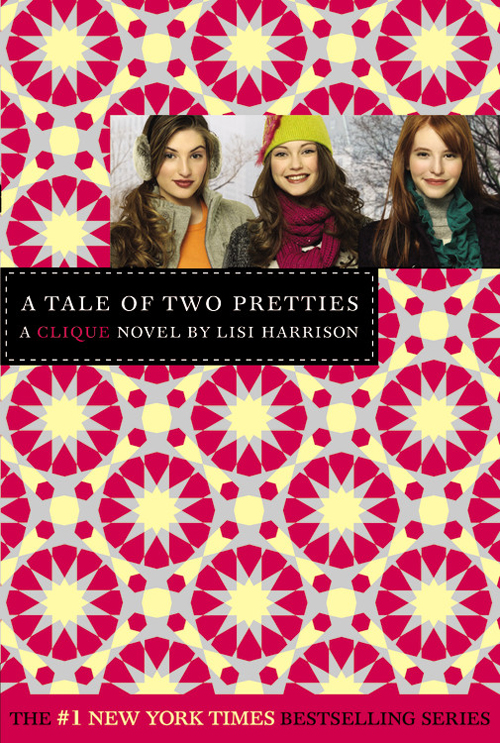 A TALE OF TWO PRETTIES
A CLIQUE NOVEL BY
LISI HARRISON

A LETTER FROM LISI

It is November 29, 2010. I am staring at my computer screen, faced with one of the biggest challenges of my writing career—and
believe me, there have been many. But this one feels more insurmountable than all of them combined, times ten. Because my
editor just asked who I would like to dedicate this final Clique book to. And I seriously can’t decide.

My parents for teaching me to love and nurture my inner freak? Yes. My brother and sister for the lifetime of laughter? Yes.
My husband for keeping me calm when I am spinning like Johnny Weir without the skates? Yes! The little creatures in my house
who kiss me every morning before I go off to work? Mmwah! My ah-mazing editors for their brilliant guidance,
contributions, and schedule-juggling? Yes! Yes! Yes! The publicity and marketing teams who remind you that I exist? Absolutely.
My publisher and producer for backing me? Indeed. The team at Warner Premiere for turning the Clique into a movie? Certainly.
The cast and crew who brought it to life? Uh-huh. My kick-butt agent for being so much more than a kick-butt agent? Given.
My attorney and his team for making me feel like family instead of a client? Yup! My friends at MTV for the most inspiring
and hilarious years of my life? Of course. Brilliant novelists who fill me with awe? Sure. My BFFs, who have watched me, year
after year, vanish into the “cone of silence” while I work on another book; who have heard me say, “This is the last time
I will fall of the face of the earth, I promise”—only to watch me disappear again? Definitely. Spell-check for making it seem
like I was listening in English class instead of daydreaming? Yesiree. The teachers, librarians, booksellers, bloggers, magazines,
newspapers, and critics who have supported this series? You betcha. The parents and grandparents who have bought my books
and encouraged their kids to read? One hundred percent. The chai tea latte–makers, gum-sellers, food delivery guys, sushi
chefs, musicians, scented-candle manufacturers, and Internet inventors who have made it possible for me to stay in my office
chair for nine hours a day? Roger that.

Clearly, hundreds are final-dedication contenders. But only one can be worthy. So what does that mean? Is it a sign? Is the
universe telling me it’s not time to end the Clique? Should I keep writing about the Pretty Committee until I have managed
to thank everyone who needs to be thanked? I’ll admit, I’ve considered it. But once again, as sad as it is, I have to stand
by my decision and leave while the party is still going.

I know you are disappointed. I have read your letters (thousands) and the comments on my Blah-g (thousands and thousands).
But it’s time.

In 2002, when I began the Clique, pop culture was different. Materialism was trendy. The more designer initials on a handbag
the better. “Who are you wearing?” was more important than what you were wearing. Green stood for money, not the environment.
It was a time of excess, and everyone was proud to wear their wealth on their silk sleeves. Friends were upgraded like cell
phones and girls seemed more loyal to a lip-gloss brand than their besties.

When I started writing
The Clique
, I wanted to show you how despicable bullying, snobbery, and elitism are by creating a character—Massie Block—who worked
tirelessly, and often heartlessly, to maintain her alpha status. My goal was to show you that the so-called
perfect girl is far from perfect. And that, more times than not, she’s more insecure than the no-so-perfect girls—Claire Lyons
and Layne Abeley. You got it
wayyyy
before the grownups did. I knew you would.

Now, eight years later, things are very different. The economy has tanked. Snatching up a killer pair of boots from Target
or H&M has become a bigger source of pride than a $5,000 handbag. National security is the new insecurity. And I pray that
the fatal reports of bullying (cyber and live) have forced you all to take an honest look at how you treat others.

I don’t feel as compelled to shine a light on shallow behavior as I did in 2002, simply because there is less of it. Is it
gone? Sadly, no. But it’s not as ubiquitous as it used to be. I also think Massie and the Pretty Committee have learned a
lot about themselves and the true meaning of friendship. Are they perfect? Puh-lease. Who is? But they are more grounded than
they were when the series began. So am I. Are you?

As long as I write, I will always fill my books with goofiness. That’s one thing that will never change. Because that’s who
I am. And I can’t thank you enough for accepting me; for coming back month after month; for joining the biggest Clique in
the world; for being final-book dedication worthy.

And so,
A Tale of Two Pretties
is for _________.
*
My loyal, brilliant, always improving, wonderfully imperfect reader. You were, are, and always will be the wind beneath my
freak flag. Until we meet again…

The frigid night air smelled like fireplaces, pine, and anticipation.

“Just one more second,” Cam called from inside his garage.

Claire stomped her candy cane–inspired red-and-white Keds against the asphalt driveway to stay warm. But her chattering teeth
had nothing to do with the winter weather and everything to do with excitement.

“And keep your eyes closed!”

She shut them so hard her lids shar-pei’ed, showing Cam that he was a go-the-extra-mile kind of guy and (if she was being
Christmas Eve honest) because she was a wee bit nervous. He’d given her gifts before: gummies, burned CDs, framed photos…
but never anything that required closed eyes and a garage.

Suddenly, the door lifted with a creaky groan. “Okay. Open!”

Either Rudolph’s nose had hanged itself or Cam had replaced the regular garage light with a red bulb. At first the dim glow
made it hard to see, but once her eyes adjusted, Claire giggled nervously. “What is this?”

“What does it look like?” Cam asked from behind a
microphone, an electric guitar strapped across his green henley. He looked like Justin Bieber minus the cotton swab hairdo.

Harris, his older brother, sat at a rickety drum set behind him, while Massie’s ex, Derrington, stood off to the left, with
a bass. But the biggest shock was Layne Abeley, who wore a plaid fedora, a long black blazer, black baggy slacks, a white
skinny tie, and a saxophone.

“FYI,” Layne said into her microphone, “I’m not only the backup vocalist, I’m also the wind section.”

Harris laughed at the fart impression.

Harris began drumming a four count, Derrington plucked his bass, and Layne clamped down on the reed mouthpiece and blew. They
sounded a like a rock version of “Twinkle Twinkle Little Star.” Cam leaned toward the mic and Claire’s insides squinched.
What if he was bad? What if he was good? What if she blushed? Was she supposed to dance? Sway? Clap? Cry? Throw her bra onstage?
Because she didn’t have a bra, just a tank top, and she wasn’t about to take it off and—

Her crush began to sing.

This Christmas I know for sure,

I’ve got a fever and you’re the cure.

But I’ll keep you warm my little gummy…

Was this really happening?
Claire felt so awkward and special at the same time she didn’t know where to look. Cam’s blue eye? His green one? Or Layne’s
wind-filled cheeks? She dug deep into the pocket of her blue puffy coat and pulled out a sour reindeer, the limited-edition
seasonal special at Sweetsations Candy Shoppe.

Everything sucks when you’re not there,

You inspired me to write this ditty,

And even won over the Pretty Committee…

Cam said he wanted to exchange Christmas gifts, but she hadn’t expected this Jo Bros–like serenade. A jolt of affection—or
was it the limited-edition sugar rush?—made Claire’s crush levels soar higher than a reindeer in a rocket.

I stand before you with my guitar,

Cause I’m not old enough to drive a car,

When I am, ride shotgun with me,

Off into a sunset of sweet candy.

Everything sucks when you’re not there.

The song ended with a soulful wail from Layne, and the Garage Band bowed.

Claire let go of the breath she hadn’t realized she’d been holding, and then broke into wild applause. Forget the Gondola
Wheel at Rye Playland: The Fisher garage, with its shelves stocked with tools, bike helmets, and old video games, its cracked
cement floor, oil stain patches, and single red bulb, was officially the most romantic place on Earth.

“Merry Christmas.” She smiled, wishing everyone would stop staring, wondering what she should do next. Because she had zero-minus-a-thousand
ideas. “That was awesome, you guys,” was all she could manage under such extreme pressure.

“I still think Sax Appeal is a better name,” Layne harrumphed, laying her instrument in its foamy case.

“I like Who Cracked Wind,” Derrington joked, wiggling and fanning his booty.

When everyone stopped laughing, Harris tossed his drumstick in the air. “Okay, it’s Wii time.”

“You got Call of Duty: Black Ops?” Layne asked.

A Distant Melody by Sundin, Sarah
The Cold Hand of Malice by Frank Smith
Abandoned Memories by Marylu Tyndall
Wounded Angel (The Earth Angels) by Gail, Stacy
The Dark Part of Me by Belinda Burns
Close Kin by Clare Dunkle
Not Dark Yet by Berit Ellingsen
The Descent into the Maelstrom (The Phantom of the Earth Book 4) by Zen, Raeden
White Ash on Bone: A Zombie Novel by Jason Campagna
Stalemate (The Red Gambit Series) by Gee, Colin
Our partner