Read Ace in the Hole Online 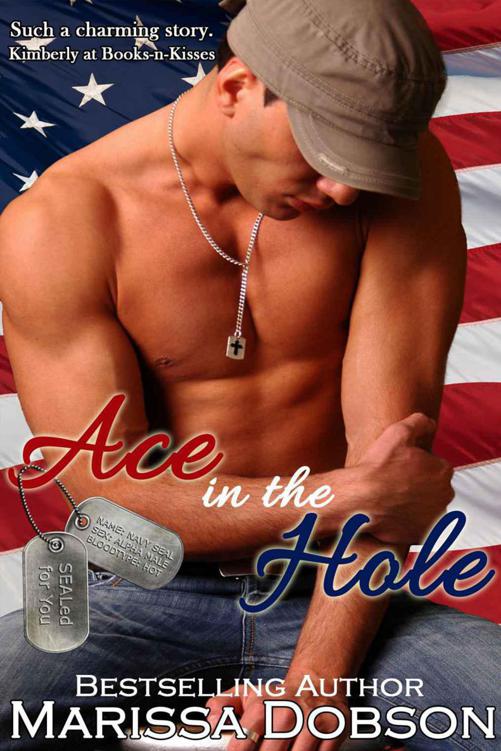 eBooks cannot be sold, shared or given away as it is an infringement
on the copyright of this work.

This is a work of fiction. Names, characters, places and incidents are products of the author’s imagination and are used fictitiously and are not to be constructed as real. Any resemblance to actual person—living or dead—is entirely coincidental.

All rights reserved. No part of this publication may be reproduced, stored in a retrieval system, or transmitted in any form or by any means, electronic, mechanical, photocopying, recording, or otherwise, without the prior written permission of Sunshine Press. Criminal copyright infringement, including infringement without monetary gain, is investigated by the FBI and is punishable by up to five years in federal prison and a fine of $250,000.

To all the men and woman in the military who serve our country, and their families.

Other Books by Marissa Dobson

Ace Diamond left behind the woman he loved when he joined the Navy SEALs. For years he focused on his career, risking life and limb on missions for his country. Now home on leave, he must face his past and ask himself if leaving her was a mistake.

At seventeen, Gwyneth London gave her heart away only to have it broken. More than a dozen years later, she decides to embrace her single life and have a child on her own. Ready to start over in her hometown, she doesn’t expect to see the man who still holds her heart, but when he walks back into her life she’s unable to push him away.

Can Gwyneth and Ace claim the life they were supposed to have, or will they let love pass them by?

A
ce Diamond tossed his duffle bag at the foot of the steps and admired the peaceful sanctuary he called home. The old Victorian house he was born and raised in was now his. Since purchasing it from his parents after they decided to buy an RV and travel the country, very little had changed. Family photos lined the wide staircase; everything was well used and loved, none of that stuffiness some old houses had. The memories of his childhood played out everywhere he looked.

He’d made it home after months of blood, death, and war that had taken a toll on his body and his spirit. He needed a break, not to mention a week’s worth of sleep.

This deployment had been harder than any of the others. Too many of his fellow warriors had been killed. Memories of the bloodshed haunted him every time he closed his eyes. Too many recollections he would have rather left behind. He was a different man than when he left a year ago, and he could no longer look at the world the same way. Everywhere he looked he saw people taking freedom for granted. So many of them didn’t even realize that more men and women than he’d care to count gave their lives for those freedoms. This deployment served to remind him just how expensive that freedom was.

Dishes clattered in the kitchen, drawing him from his thoughts and back to the present.

“Wynn?” He made his way toward the large farmhouse kitchen in the rear. Coming around the corner, he expected to find his little sister. Instead, he saw a woman with a short pixie haircut, red hair sticking up every which way, holding a knife in her hand.

“Who are you?” Fear coated her voice.

He looked at the small knife, knowing it would be easy to disarm her if he had to. “Better question is who are you? After all, you’re in my house.”

“Ace…” Her eyes widened in surprise. “You’re not supposed to be here. Wynn said you wouldn’t be back for a couple more weeks.”

“Well, I’m here, so why don’t you tell me who you are?” He leaned against the wide entryway into the kitchen, crossing his arms over his chest.

“Gwen.” With a shaky hand, she set the knife on the counter. “Wynn told me I could stay here until I found a place of my own. I came back for my mother’s funeral and couldn’t leave. You don’t realize how much you miss home until you come back.”

“Gwyneth London, it can’t be.” He took in the woman before him.
Wow!

“You didn’t recognize me at first, so I thought maybe you forgot all about me.”

“You look so different.” Different was an understatement. Her long blonde hair had been replaced with the red spiky do, and she had developed curves in all the right places. She was gorgeous. Gathering himself together, he nodded. “I’m sorry about your mom. She was an amazing woman.”

“Thank you.” She leaned against the counter. “I was making a sandwich. Can I make you one?”

“No thanks, I grabbed something on my way home from the airport, but go ahead.” She turned back to the cutting board and cut into the turkey, tomato, and lettuce sandwich. That was when he saw the slight protruding tummy, the beginnings of the curve of pregnancy. Was she?

“You noticed.” Sometime while he was lost in his thoughts she turned around, sandwich in one hand, her other hand resting on the curve of her stomach.

“Is that the reason you decided to stay?”

“Let’s sit, I’ll explain while I eat.” She moved past him into the dining room, and took a seat at the head of the long dining table. She took a bite out of the sandwich before meeting his gaze. “For years I’ve been so focused on my career, never sparing time for a personal life, let alone dating or even thinking of children.”

“Two years ago I was in a car accident and was in a coma for weeks. When I woke, I realized there was so much more in life. More that I wanted.” She ran her hand over her stomach. “Four months ago I decided I wanted to start a family. So I went to a fertility clinic, and well…you can see the results.”

“Why not do it the old-fashioned way?” His eyes widened, appalled that she let a doctor impregnate her instead of doing it the way their parents had.

“To do it that way, you need a man. One-night stands tend to get upset when you use them to have a child without telling them. This seemed a better route.”

“But you’ll be doing it all on your own. No father to help raise the child.”

“I can raise a child myself. My mother practically did it with me and I turned out just fine. The important part is there’s no father to try to take my child away.”

She polished off the rest of her sandwich while he sat there trying to figure out what to say to that. Gwen had never been the average woman. No, she had been strong, and full of life. She’d never let a man or anyone tell her what to do.

“I realize you don’t agree…”

“What makes you say that?” He didn’t like that she found him so easy to read.

“We might have been out of touch for years, but I know you, Ace Le Diamond. I can see the disappointment in your pretty blue eyes. You were raised in a perfect family by both parents. I wasn’t so lucky, and my child won’t be either, but she’ll never lack for anything. Please don’t disrespect my decision just because you don’t agree with it.”

“Wow.” He held up his hands in front of him, warding off her answer. “I said nothing and did nothing to disrespect your decision. I was only thinking back to when we were kids. You always said you wanted a husband, two and a half kids, a dog, and a house with a white picket fence. All these years that I haven’t seen you, I just figured you found what you wanted.”

He kept it to himself that even though Wynn stayed in touch with her, he deliberately lost touch. The attraction between them had always been strong, drawing them together through everything, but when he joined the military, the distance began, only to worsen when he made the SEAL team. She might have been proud of him, but the fear that lingered in her eyes tore at his heart. Distance seemed to be the only way to avoid it.

He had never wanted to cause her any pain, and seeing it there in her eyes he knew the only way to change it was to step back. To let their friendship drift away until she no longer cared about him. It was hard, and over the years he had thought about her, but giving up his career as a SEAL wasn’t an option. He was meant for the excitement and the thrill. It was everything he was.

G
wen couldn’t believe Ace was there, sitting beside her. The man who’d stolen her heart, the man who still had it but had no idea. So much time had passed since they’d seen each other, and there he sat looking like not a single day had gone by. Her heart sped, her palms were sweaty, and she felt lightheaded just being near him again. She hated that he had such an effect on her.

She took a sip of the milk she had brought in with her sandwich. “I’ll call my realtor and see if she can find me a short term apartment to rent while I’m house searching. If not, I can get a hotel room.”

“There’s no reason to do that. My mission ended early but I’ve been reassigned to a training mission. I leave in three days, so you might as well stay put.”

“I don’t want to be in your way.” Nor was she sure she wanted to be alone with him for three days when she couldn’t seem to get control of her emotions now.

“You won’t be, but if it becomes an issue for either of us I can bunk at Wynn’s. I’m assuming you took over the master bedroom, so I’ll stay in the guest room.”

“Guest room? You mean the storage area.” She teased, giving her something to say besides the fact that she took his bedroom to be close to him. It sounded stupid, especially since she hadn’t seen him in years, but being in his house, it brought back all the old feelings she buried deep within her.