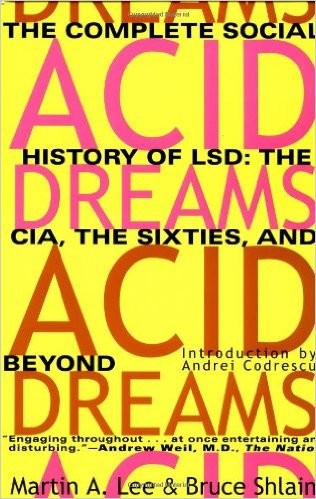 “A fascinating social history . . . Makes connections between people linked with the CIA and the widespread availability of LSD during the 1960s.”

“An important study of cultural history . . . The scholarship is exquisite and the methods sensible.”

“Excellent . . . Captivating . . . A generalist’s history that should replace all others.”

“A landmark contribution to the sociopolitical history of the U.S. . . . Some of the liveliest, most absorbing, best-documented historical analyses to appear in recent years . . . A seminal contribution to understanding America’s most turbulent modern decade.”

“As splendidly written as it is fascinating . . . A remarkable history of an unforgettable time.”

“This funny and irreverent book brings it all back.”

“Recounts some of the most bizarre incidents in the history of U.S. intelligence.”—
The Boston Globe

“A monumental social history of psychedelia.”

“A blistering exposé of CIA drug experimentation on Americans. It’s all there.”

THE COMPLETE SOCIAL HISTORY OF LSD:
THE CIA, THE SIXTIES, AND BEYOND

MARTIN A. LEE
AND
BRUCE SHLAIN

With an Introduction by Andrei Codrescu

Published simultaneously in Canada
Printed in the United States of America

Due to limitations of space, permissions and acknowledgments appear on p. v, which constitutes an extension of this copyright page.

Acid dreams : the complete social history of LSD : the CIA, the sixties, and beyond / Martin A. Lee and Bruce Shlain.

Permission to quote from the following sources is gratefully acknowledged:

“Seeking the Magic Mushroom” by G. Gordon Wasson, from
Life
. Copyright © 1957 by Time, Inc. Reprinted by permission of Time, Inc.

Portions of Chapter One appeared previously in
Mother Jones
, May 1982, and
Rolling Stone
, September 1, 1983.

Many people helped to make this book possible. Above all, we wish to express our gratitude to Allen Ginsberg and Dr. Oscar Janiger for their counsel and generosity of spirit. And for their enduring friendship: Bret Eynon, oral historian and New Left scholar, and Jeff Cohen, who nurtured the manuscript in countless ways from start to finish.

We’d also like to thank James Grauerholz for encouraging us in the early going; Carl Oglesby, for his ever-articulate insight, and the other members of the Assassination Information Bureau,- Peter Berg and Judy Goldhaft, for sharing their perspective on Haight-Ashhury and the Digger experience; Robert Ranftel, Paul Krassner, and Steven Ben Israel, for their comedie genius; Beverly Isis and Liz Her, for their unwavering support; and Michael Aldridge, the curator of the Fitz Hugh Ludlow Memorial Library, an invaluable resource for sixties and counterculture historians. Very special appreciation to Michael Rossman, William Burroughs, Peter Stafford, Tim Leary, Bill Adler, Ed Sanders, Mark Dowie, Tim Scully, Jonathan Marshall, Bernard Ohanian, Dorianna Fallo, and the late Julian Beck.

Our heart-felt appreciation to Alana Lee, for coming through time and again. To Goodwin and Silva Lee, Marvin and Hilda Shlain, and Joe and Emily Krinsky, for providing the kind of support that only family can give.

And to Gayle, for her love and faith.

And finally, we’d like to thank Geri Thoma of the Elaine Markson Literary Agency; Joy Johannessen, for her excellent copy editing; Fred Jordan, our editor; Laura Lindgren, Laura Kane, and the staff at Grove Press.

“We do not see things as they are,

I
NTRODUCTION: WHOSE WORLDS ARE THESE? BY ANDREI CODRESCU

PART ONE
The Roots of Psychedelia

LABORATORIES OF THE STATE

3. UNDER THE MUSHROOM, OVER THE RAINBOW

ACID AND THE NEW LEFT

PART TWO
Acid for the Masses

6. FROM HIP TO HIPPIE

POLITICS OF THE BUMMER

7. THE CAPITAL OF FOREVER

9. SEASON OF THE WITCH

P
OSTSCRIPT: ACID AND AFTER

Introduction
Whose Worlds Are These?

In June 1967 the Candyman burst through the door of my pad on Avenue C on New York’s Lower East Side. He always burst through the door because that was his style. He could barely contain himself. He dropped his mirrored Peruvian bag on the kitchen table and exclaimed: “Just for you! Czech acid! ” The Candyman always had some new kind of acid. That month I had already sampled Window Pane and Sunshine. I didn’t know if my system could handle another extended flight to the far reaches. But this Czech acid
was
different. For one thing, it revealed to me that the entire molecular and submolecular structure of the universe was in fact composed of tiny sickles and hammers. Billions and billions of tiny sickles and hammers shimmered in the beauteous symmetry of the material world. I always thought of this particular “commie trip” as a rather private experience brought about by my having been born and raised in Communist Romania, where sickles and hammers were ubiquitous and unavoidable.

I did not doubt what I had seen, but I did doubt whether there was such a thing as Czech acid for the simple reason that Czechoslovakia, like Romania, was a monochromatic world. It seemed clear that if acid had existed in Eastern Europe it would have brought about the collapse of communism there, just as it was bringing about the downfall of a certain kind of dour-faced, simple-minded America. And at that time it didn’t look like communism was anywhere near collapse. Well, I was wrong. Reading this extraordinary, superbly researched, suspenseful history of LSD, I find, on page 115, that: “In September 1965 Michael Hollingshead returned to his native London armed with hundreds of copies of the updated
Book of the Dead
and five thousand doses of LSD (which he procured from Czech government
laboratories in Prague).” And communism did collapse, though not right then, and acid
did
have quite a bit to do with it. Charter 77, the Czech human rights organization, was founded by Vaclav Havel in defense of the Plastic People of the Universe, a psychedelic band inspired by the Velvet Underground. Havel himself was in New York in 1968, listening to the Velvets and dreaming, no doubt, of a way out of Cold War ideology.