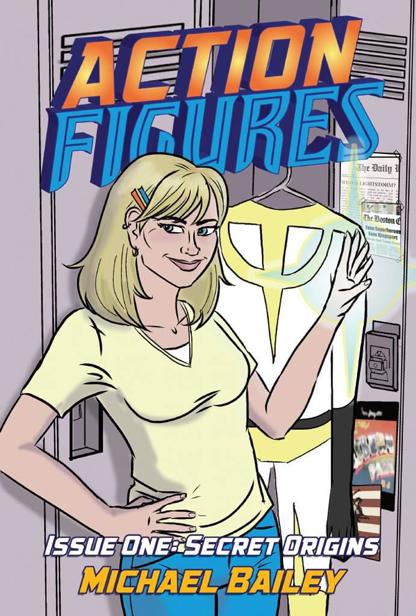 Excerpts from the following songs are © their respective owners:

PART ONE: THE NEW GIRL IN TOWN

PART ONE: THE NEW GIRL IN TOWN

My name’s Carrie Hauser, and as I record this on my trusty laptop, it’s New Year’s Eve and, coincidentally, the end of the weirdest, wildest, and worst year of my young life—and also the greatest. Over the past four months I’ve met incredible people, had an amazing adventure, and learned that the world is so much larger and crazier and more fantastic than I could have ever dreamed.

Oh yeah, and I’ve nearly been killed several times, but I try not to think about that part too much.

Maybe I shouldn’t be recording this.

Okay, maybe I’ll record it and erase it. I need to get everything that’s happened out of my head. Maybe hearing myself say it out loud will help me make sense of it.

Or I’ll just sound like a total crazy person.

All the more reason to erase it, I guess. I don’t
want people in the future thinking I was nuts.

Except I’m not nuts. I just have a really weird life. I didn’t always. Life was extremely normal for a long time.

Right up until I found the dying alien.

I’m not making any sense, am I?

I’m going to start over.

It’s not the best way to start my first day of school.

I’d set the alarm clock for the right time, I’d remembered to turn the alarm on, it’s going off—the problem is I’ve gotten a little too used to sleeping in so, big dummy me, I keep hitting the snooze bar.

It’s 6:57 AM when it occurs to me, hey, maybe I should see what time it is. It doesn’t hit me right away I need to get my lazy butt up and get ready to wow my new classmates at Kingsport High School, but when it finally clicks? Good morning, spaz.

I’m not ashamed to admit that I’m a normal fifteen and a half- (practically sixteen-) year-old girl when it comes to my morning rituals. I shower, I use fruity-smelling body washes and facial scrubs, I shampoo and condition, I blow-dry upside-down so I can get lift without using any product (which can weigh your hair down. Today’s beauty tip). I’m not big on makeup. Not anymore. Not like I used to be. If you’d seen me a few
months ago? You’d think I was turning tricks on a street corner somewhere. Nowadays I keep it simple: light eye makeup, a little color on the lips, good to go. Clean and natural, that’s my new motto. No more slapping the cosmetics on by the pound.

(Did you know heavy makeup on oily skin leads to crazy zits? And that the worst way to hide the zits is to slap on more makeup? Hard lesson learned there.)

Anyway, all that primping and preening? Yeah, not today. I barely have time for a quick scrub at the sink for my face and stubbly pits (oh God, sleeves, I need sleeves today!). The hair goes into a ponytail and, sorry face, you’re going in
au naturel
. No time to waste on agonizing over an ensemble, it’s a jeans and T-shirt day. Luckily, and I don’t mean to brag, I can rock a simple J-and-T combo.

On my way down the stairs I wonder why the maternal unit didn’t kick my tushy out of bed when my attempt at self-sufficiency met with epic failure, then I remember: it’s her first day, too. She has a new job to go with the new town and the new home. Well, new-ish. Mom grew up in Kingsport, lived in this house with Granddad (mine, not hers), so after the divorce she moved back home so she could have some sense of familiarity, of stability.

Me, however? No such luck. No stability for Carrie. I got dragged along for this ride kicking and screaming. No lie, it kind of sucks.

Whoops. Drifting into sullen, self-pitying teenager mode. Have to watch that.

Deep breath, Carrie. You can do this.

Looks like Mom was thinking of me: there’s a package of Strawberry Pop-Tarts (yum!) on the kitchen counter and enough of her paint-peeler coffee left in the pot for one cup. I’m halfway through chugging it down when I hear the school bus roar past the house. It never even slows down. Did the driver know he had a new stop? Or did he see a blank patch of sidewalk and decide I was a no-show?

I grab my backpack and run outside, hoping to catch the driver’s eye in the rear-view, and there he goes, down the street, and here I am, chasing after him like a total moron.

I keep running. The school’s within walking distance, but I won’t get there in time. Not on foot.

I bang a right and duck into the woods separating my street with the next closest neighborhood. They’re not so thick they slow me down, but thick enough that no one can see me when I take off.

I feel it in my hands first, an electric tingling sensation, like pins and needles after your foot falls asleep but a million times more intense, just short of painful. It spreads up my arms and engulfs the rest of my body, takes me over in a heartbeat.

Living light. That’s the only thing I can think of that comes at all close to describing what I become. I’m like a sunbeam pretending to be a person. I’m still solid, I can touch and be touched, but I’m weightless. I don’t understand what happens or how it works, but let me tell you, when I leave the ground and soar into the air like a rocket, it doesn’t matter. Nothing matters but me and the sky.

Flight was the first power I discovered, but it’s by no means the only thing I can do. I glow by default, and over the course of several weeks of on-and-off experimentation, I learned that I can crank up the brightness if I want to, or turn it down to a dim shine. I don’t know if you can accurately call them lasers, but I can shoot energy from my hands, a trick I learned accidentally (my parents blamed the melted trash can on vandals). I’ve tried doing other things like making shapes with the energy, but so far? Fail—unless you count a wall as a shape.

But the best part, by far, is the flying. The first time I went airborne? Holy crap, I nearly wet myself. I mean, one minute I was on the ground and the next, the ground was thousands of feet below me and I was screaming and waiting for whatever it was keeping me in the air to quit and drop me back to earth, but that didn’t happen. I didn’t fall, and my scream of terror turned into a nervous, exhilarated laugh like you’d let out after a roller coaster comes to a stop and you realize you aren’t dead. I felt more alive than I’d ever felt before (pardon my cliché, but it’s true), and all the crap that had been heaped on me a few days earlier had disappeared. I was free. I loved—I
love
the feeling, so much that I totally forget to be afraid of falling. Sometimes I turn off my power and let myself go into freefall. It’s not a rush like you’d think it would be. I find it very serene, actually, almost meditative.

(For obvious reasons, I haven’t said word one to my mother. I don’t think she’d respond well.)

But there’s no time for that now. I have places to be. No, correction:
a
place to be.

I stop in mid-air when I realize I have no clue
where the school is and take in the Google Earth view of Kingsport. It’s a pretty big town about a half-hour south of Boston, right near the ocean, which is very cool. It reminds me of some of the bigger towns on Cape Cod, where I’m from: it’s heavily developed in some spots and nothing but green in others. The high school is on the edge of the town center, where all the action is (literally, but I’ll get to that in a while), so Main Street is easy to spot. Then I pick out the large, rambling building with parking lots slapped around it with no sense of logic and (bingo!) a cluster of what are most definitely assorted athletic fields: football, baseball, track, tennis, a little something for everyone.

There are some woods ringing one side of the building. That’s where I go. I drop slowly so I can avoid getting caught up on any branches, touch down in a thick carpet of dead brown leaves laid down by previous autumns, and power off. Now I’m doubly glad I went with the ponytail; flying means instant bad hair day.

A bell goes off and I break into a sprint, praying that that was an early warning bell and not the
You’re late, Hauser, sucks to be you
bell.

It doesn’t suck to be me.

I report in at the main office and a middle-aged woman who looks like she’d rather be anywhere but here tells me to hold on a minute. It’s an order, not a request. Man, I hope she’s not the norm around here.

She picks up the phone, says something, hangs up, and tells me “He’ll be right out” but doesn’t tell me who “he” is. “He” turns out to be the assistant principal.

“Hi there, Caroline, I’m Mr. Dent,” he says, shaking my hand. He’s kind of young to be in charge of anything except maybe the night shift at Burger King. He’s also good-looking, and I bet a lot of the girls here entertain inappropriate fantasies about the guy.

“Hi, Mr. Dent. Everyone calls me Carrie,” I say. I don’t like Caroline. It’s not a bad name, but it sounds so formal: Caroline Hauser. If names were destinies, I’d be doomed to life as a TV news anchor.

(For the record: my middle name is Dakota. Don’t laugh.)

“All right, Carrie. I’d tell you everyone calls me Carson, but the superintendent frowns on the students calling the adults by their first names. Lacks respect,
I’m told,” he says, hinting strongly that he does not agree with this policy. I like him.

He tells me my paperwork is all set (I had paperwork?) and offers to escort me to my new homeroom. The final bell goes off as we step into the main hallway, passing through a rapidly thinning sea of students rushing to get where they need to be. Carson-call-me-Mister-Dent doesn’t rush.

Between Planets by Robert A Heinlein
At Wolf Ranch by Jennifer Ryan
Forbidden Entry by Sylvia Nobel
House of Trent 01.5 - His for Christmas by Jennifer Haymore
Mob Boss Eleven- The Wrong One (The Mob Boss Series Book 11) by Mallory Monroe
Doubleback: A Novel by Libby Fischer Hellmann
Nightfire! (The Corvette Nightfire Prequel) by Daniel Wetta
Tessa Dare - [Spindle Cove 03.5] by Beautyand the Blacksmith
Winged Raiders of the Desert by Gilbert L. Morris
Have Stakes Will Travel: Stories From the World of Jane Yellowrock by Faith Hunter
Our partner