Read After the Fire Online 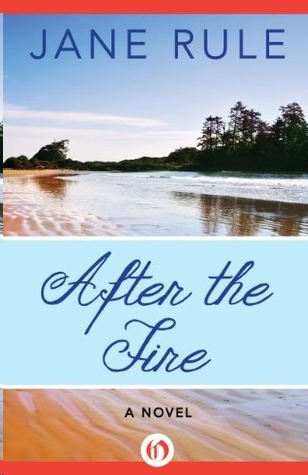 After the Fire
A Novel
Jane Rule

A Biography of Jane Rule

T
HE FIRE HAD BLOOMED
into the winter night before the fire truck could get there, skidding through the slush, spewing out mud from the deep potholes of the dirt road. Behind it came the old water truck, even more slowly, and behind that a line of vehicles that might have been resurrected from the wrecking yard for the occasion.

“Christ! Do you think Dickie’s still in there?” Homer, the driver of the fire truck, shouted to the young woman sitting next to him.

Karen Tasuki didn’t reply. This was her first real fire. The noise, the heat, the beauty of it amazed, dazed her.

“Come on!” Homer shouted, already halfway out his door.

Then she was on the ground, stumbling, fumbling, with half a dozen other people, who might never have been at all those weekly practices, so routine, so slow-motion and silly without slush and mud and darkness and roaring light.

Their chief was not among them, had taken the night ferry across to the mainland, someone said. Whoever was supposed to take charge in his place didn’t know it. People shouted conflicting directions as if they should form competing teams, play tug-of-war with the hose or knock each other down with the spray of water.

“This is ludicrous!” Karen muttered.

“Don’t waste the fucking water on the house!” someone shouted. “Keep those trees from going!”

“Stand back! The roofs about to go.”

Karen looked up from her length of hose and saw the neat rows of shingles faint into the fire. The only shape left now was the chimney. Even if they’d known what they were doing, there had never been a chance of saving the house or anyone or anything in it. At practice they had been told as much. Oh, they were supposed to try, but all they could hope to accomplish was to keep such a fire from spreading to the trees or outbuildings.

The hose, trained now on the trees nearest the house, suddenly died in their hands. They had used up the supply in the water truck. Cars had to be moved before it could be turned around and sent back the slow two miles to the storage tank at the fire hall.

While they waited, there wasn’t much to do but stamp out the little fires started from the embers and sparks which fell like seeds and sprouted afresh if they lighted on anything but the melting snow.

“Thank God there’s no wind,” Homer said, taking out a cigarette, cupping a match in his large hands.

The tiny flame restored Karen for a moment to the little illusion she had had of fire. So she would confront a tidal flood with no greater understanding than she’d gained from a dripping tap. What had her father said to her? “What you sadly lack is an education for catastrophe.” He hadn’t meant fire practice either, but before the fact—that practicing was nothing but a lesson in futility, in helplessness. She should be back at the hall with the older women, making coffee and sandwiches.

“We don’t even know if he’s in there,” Adam answered in a protest which reflected his friendship with Dickie.

“What’s left of him is in there. Where else would he be? There’s his truck.”

“He wasn’t in that good shape when he left the pub tonight,” Karen offered.

Just about four hours ago by now. Dickie John could be a surly drunk, hard to cut off at the bar, impossible to drive home. She had cut him off half an hour before closing time, but somebody had probably bought him another drink.

“Was Red with him?” Homer asked.

“No, she didn’t come in all evening,” Karen said.

None of them was doing anything useful now. They had to stand, waiting and watching the fire burn itself out.

“Dickie hasn’t been hanging around with Red for a couple of weeks now,” said Rat, a young man with a gentle face blurred with a need for sleep.

“Must be a first for Dickie, her telling him to bugger off,” Adam said, friend but also rival of the subject of their conversation.

“Do you really think the poor bastard’s in there?” Rat asked.

“Look, there’s no point in all of us hanging around. Rat, you’ve got a baby to keep you up. Why don’t you give Karen here a lift back to the hall? Adam, it’s going to be a hell of a short night for you, too,” Homer suggested.

“Yeah, okay,” Riley said, looking as if his own evening’s entertainment was only now wearing off badly.

Karen, aware she’d been given no choice, hadn’t the will to protest. The end of the drama was going to be charred bones and ashes. She wouldn’t cry, but she might vomit up her dinner.

Before Karen could question the wisdom of that suggestion, all their attention turned to the returning water truck. They moved with new competence, grateful for something to do, though it was nothing now but playing those few hundred gallons of water on the already dying fire.

When they had settled in his old pickup, Karen said, “Do you really think Dickie’s mother should be told, before they know for sure, I mean?”

“They know,” Rat said quietly and then burst out, “What a bunch of fucking clowns!”

Inclined to agree with him but wanting to comfort, Karen said, “It was too late anyway.”

“It always bloody well is,” Rat said tiredly. “But why didn’t Homer take charge from the beginning?”

“He only knows how to drive the fire truck,” Karen said.

“Hell, he’s been around forever, lived on this island all his fucking fifty years. He should have learned
something!”

They traveled the rest of the way in silence.

“I guess there will be coffee and sandwiches,” Karen said as she got out of the truck at the fire hall where she’d left her own car.

Homer’s wife, Jane, Henrietta Hawkins, and the silly Milly Forbes were there, sitting around a table, drinking tea. Nobody had sampled the large ham, turkey, and egg sandwiches that sat on a plate underneath a film of Saran Wrap.

“Well?” They all turned to Karen.

“It’s pretty well over. They’re using the second truck of water just to damp it all down. There’ll be nothing left but the chimney.”

“Have they found Dickie?” Henrietta asked.

“Not yet,” Karen answered. “They want me to call his mother.”

“I’ll do that,” Henrietta said, her old face both resolute and kind.

“That poor woman!” Milly Forbes said and began to cry.

Homer’s wife said, “Have a sandwich. You must be exhausted, out there working beside the men.”

“I didn’t do much,” Karen said, knowing she should take what was offered, but nausea overcame her manners.

“You get along home to bed,” Henrietta said. “You’ve done your share.”

Karen turned gratefully away, but, once she was seat-belted into her car, she wished she had not left that human company. In the year she’d been on this little island, she had learned nothing about the one thing she had come to learn: how to live alone.

Instead, she had filled all her waking hours with any people she could find. She not only worked at the ticket booth for the ferries but also was a waitress at the local pub, rationalizing two jobs because she was saving to buy a place of her own. The thought of buying a house to live in by herself was even more daunting than returning to the little beach cottage she had rented for the winter months.

The light on the porch gave a false sense of welcome, but at least inside there were mute signs of other people’s tastes. At least, she wasn’t banished from their furniture. Karen was grateful, too, that she didn’t have to light a fire to keep warm. She simply had to turn up the thermostat on the electric heater. Tonight even the heater felt suspect. She checked to be sure no window curtain or stray scrap of paper was anywhere near it.

Why was there that peculiar smell of smoke? She hadn’t been home to bother with a hearth fire for over a week. Then Karen realized she herself was the source. Her clothes, her hair smelled of cedar smoke; it didn’t have the stale sweet tar smell she brought home from an evening at the pub which at least was human, if unhealthy. What she smelled now was sudden death.

Karen didn’t want to think about Dickie John or what was left of him. Nor did she want to think of Homer who, however incompetent, probably did recognize a charred body when he saw one. Surely they wouldn’t let Dickie’s mother see that. Karen remembered the body bags carried on the fire truck, objects of macabre humor until tonight.

It wasn’t a bad habit she’d formed but a deliberate exercise because she couldn’t stand hours alone without the sound of a human voice. The radio helped, but it was not the same as a human voice right there in the room with her. She explained it to herself as keeping herself company, and therefore she was apt to carry on a conversation.

“You can’t resign after your first real fire.”

“What happens when the next woman wants to try it?”

“I thought you were learning not to be a coward.”

In the shower, Karen suddenly thought of Red. How would she find out about Dickie? Probably from one of the sandwich-making women. Red cleaned for both Henrietta and Milly. Let it be Henrietta—Hen, as people called her—who had such mortal good sense. Would people blame Red? Say Dickie was drinking so much-because she’d dropped him?

Dickie, like Homer, was island grown, and most people, including his mother, treated him like a boy rather than the full-grown man he was.
Dickie.
What twenty-five-year-old with any self-respect would allow people to call him by such a name? Well, Dickie was such a hotshot, driving his great big lumber truck, showing off muscles still more impressive than his incipient beer belly, bragging about his collection of “pussy”—Karen had pictured pelts of pubic hair on his wall and flinched—being called
Dickie
didn’t bother him.

It had surprised Karen when, several months ago, Red had turned up with Dickie at the pub. He didn’t seem her type, if she had a type. Nobody seemed to know much about Red, except that she’d arrived on the island about four years ago and for practically nothing had rented a primitive little cabin with no electricity or running water. She made what money she did by cleaning for people and otherwise kept pretty much to herself.

Drying her dark, straight hair, Karen wondered where Red, whose hair was as dark as her own, had got that name. She wondered, too, how Red would feel about Dickie. She must have slept with him; Dickie didn’t hang around with women for any other reason. His friends were male. Karen had loathed Dickie, but even her physical revulsion tonight had been tinged with a small but pure pity, which transferred now to the sight of her own flesh.

She remembered reading in the training manual about the skin as an organ, how it had turned her image of her own body inside out. This thin, pliable, fragile layer of cells was the body’s only protection against such a thing as fire,
that
fire, but even the flickering flame of Homer’s match or a cup of boiling water …

Her hair was clean and dry. She got into the bed she had left several hours before and tried to sleep, but the odor of smoke still rose from the clothes she had left on the chair.

“I’ll wash them tomorrow night,” Karen said aloud before she remembered that she had decided not to talk in the dark.