Read After the Sheikhs: The Coming Collapse of the Gulf Monarchies Online

After the Sheikhs: The Coming Collapse of the Gulf Monarchies 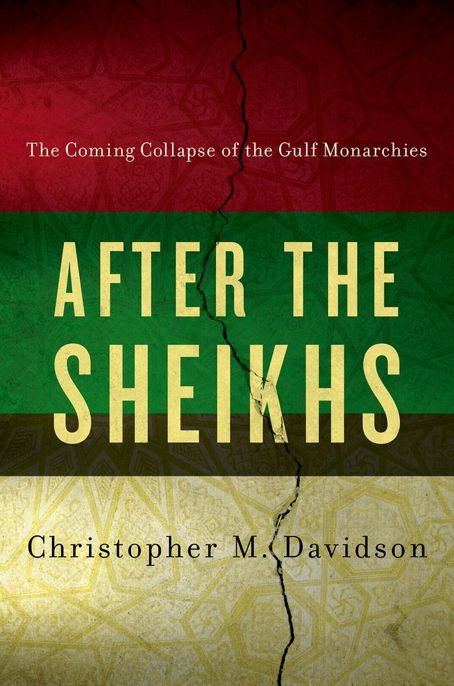 ‘It is almost forty years since the publication of Fred Halliday’s landmark book
Arabia Without Sultans
. Now, in the wake of the Arab spring, another young British academic has written an important account of prospects for the Gulf region … Orientalist special pleading doesn’t get a look in. This is an unsentimental story of hard-nosed political calculation, conspicuous consumption, opaque budgets and sovereign wealth funds.’

‘What is the secret of the Gulf monarchies’ survival? There are numerous reasons. The support of Western powers, oil wealth and an effective secret police are among them. But in this exceptionally argued book, Christopher Davidson concentrates on the prime reason: the Gulf monarchies enjoy considerable legitimacy from their populations. … This fine-tuned monarchical resilience, Davidson argues, cannot be sustained for much longer. Immense internal pressures are building up and the pressure-cooker is about to explode. Davidson marshals an impressive array of evidence.’

‘Britain and the US are uncritical friends of the hereditary Gulf rulers; but what if they are likely to collapse, as Christopher Davidson convincingly predicts? It would be folly to ignore the writing on the wall for these insatiably greedy elites; Davidson’s warning should be on the desk of every Foreign Office Minister.’

‘Davidson argues that the Gulf regimes will be gone—at least in their current form—within the next two to five years. This audacious prediction should not be lightly dismissed. The dynamics he analyses and the facts he has gathered, based on long-term observation of the region, provide tantalising clues that profound change may indeed be at close hand.’

‘
After the Sheikhs
is a book of tremendous value. It applies a rigorously constructed theoretical framework to a rich array of empirical data in order to assess the long-term survivability of some of the world’s last authoritarian holdouts. For anyone interested in understanding the post-2011 Middle East, this is essential reading.’

‘At a time when the Gulf Kingdoms arrogantly boast of having avoided the fate of their neighbours in the revolutions of the Arab Spring, this book provides a convincing counter-narrative and a powerful warning to rulers who treat their countries as personal fiefdoms.’

‘This book must be read by every Western policymaker betting on the status quo in the GCC, by every pro-democracy activist struggling to realise Davidson’s predicted outcome, and by every GCC citizen dreaming of a better future but made to fear the worst if change was to come.’

The Coming Collapse of the Gulf Monarchies

Printed in India
on Acid-Free Paper

The revolutions that never came

Origins of the Gulf monarchies

Britain and the early order

Soft power in the West: strategic investments and development assistance

Soft power in the West: financing universities and manipulating research

Soft power in the East: China and Japan

Countering the Arab Spring: the wrong side of history

I began researching and writing
After the Sheikhs: The Coming Collapse of the Gulf Monarchies
in summer 2009 from the confines of my temporary office at Kyoto University. The original idea for the book, however, occurred to me back in 2002, when I was still writing up my PhD. Intrigued by several frank and discreet discussions when living in the UAE’s northernmost emirate of Ra’s al-Khaimah, I was determined to burrow beneath the hype and gauge the true extent of loyalty to traditional monarchies in such states, especially in communities with less favourable economic circumstances. Since then, much has changed in the region, with oil price shocks, credit crunches, property bubbles, terror campaigns, rampant sectarianism, and of course full blown revolutions on its doorstep. Although largely unforeseen and at first difficult to understand, I found that most of these events and their associated impacts helped to strengthen my thesis and—more importantly—they strengthened my resolve to finish the manuscript as soon as possible. Although the book was never intended to be a crystal ball it is worth noting that the original, 2009 version forecast the collapse of most of the Gulf monarchies within the next decade. In contrast, this final 2012 version contends that most of these regimes—at least in their present form—will be gone
within the next two to five years
.

A very large number of individuals deserve my thanks. Over the past few years they have provided encouragement, fact-checking, fascinating pieces of information, and—on occasion—some necessary criticism. These include academics, human rights and pro-democracy activists, members of several political societies and religious organisations, government employees from all six gulf monarchies and neighbouring states, and of
course a small army of concerned citizens and expatriates. I am also very thankful to the following universities for inviting me to give lectures on earlier, prototype versions of this book: the London School of Economics, Oxford, St. Andrews, Yale, Stanford, and Otago. The feedback I received from such well-informed audiences undoubtedly helped me shape my thoughts.

Above all I thank my indefatigable publisher, Michael Dwyer, and all of his team at C. Hurst & Co.