[A.D. 1588.] The despised, disgraced Earl of Leicester, who had by this time regained his place in the royal favor, was appointed commander-in-chief of the army at Tilbury, Lord Hunsdon commanded the queen's body-guard for the defence of London, and Sir Francis Drake was appointed vice-admiral.

Elizabeth took up her abode at Havering Bower, a place selected for her by Leicester, situated between the rear and van of her army. There she appeared as warrior and queen. Mounted on a noble charger, with a general's truncheon in her hand, a polished steel corselet over her magnificent apparel, and a page in attendance bearing her white plumed helmet, she rode bareheaded from rank to rank, addressing her soldiers with words of encouragement and hope. She was greeted with loud shouts of applause by her admiring subjects, who felt it an honor to fight for such a noble, courageous sovereign.

fight by sea and one on land to achieve the conquest of England; but they soon found their mistake, and not a single Spaniard set foot on English soil except as a prisoner.

The Spanish Armada was soon scattered, and victory was declared for England.

Immense crowds gathered to welcome the queen on her return to Westminster. She was then fifty-five years of age, at the height of her glory, and beloved by her subjects, whom she had ruled for thirty years, and who had united, one and all, Catholic and Protestant, to support her in vindicating the honor of England.

Her first act was to reward her brave commanders and provide for the wounded seamen. Upon Leicester she would have bestowed the highest office ever held by an English subject, — that of lord-lieutenant of England and Ireland ; but, much to the satisfaction of the other statesmen, he died before the patent could be made out. A series of thanksgivings Were observed in London to commemorate the victory, and the queen was presented with a number of rich and valuable gifts.

Queen Elizabeth was never an idle woman. Long before day, in winter, she transacted business with her secretaries of state, heard public documents, and gave her orders concerning them. After breakfast she would promenade in her garden or the corridors of the palace, as the weather prompted, attended by some learned gentlemen of the court, with whom she discussed intellectual topics, and a portion of each day was devoted to study.

She observed strictly all the fast-days prescribed by the church. She was a moderate eater, and seldom drank anything but beer ; when she dined in public the table was magnificently spread, with a profusion of costly plate, for she was fond of displaying her riches, particularly be-

fore foreign ambassadors. Her cufhbearer always served her on his knees, and music and singing accompanied the banquet.

At supper, when the cares of the day were over, the queen would chat freely and pleasantly with her court, and the evenings were passed with chess-playing, music, or recitations and stories by the famous comedian, Tarleton, and others. She was fond of apes and dogs, but, beyond all, of children, with whom she loved to talk and amuse herself.

As a rule, Elizabeth treated her attendants well; but when her temper got the upper hand, which was not seldom, she descended to the level of a common virago, and more than once struck some maid of honor for a trifling offence. But these outbursts of rage were reserved for the people of the palace; her other subjects witnessed only sweetness and good humor.

Her impulses were good, as she proved in the case of Margaret Lamb.run, a Scottish woman, whose husband was supposed to have died of grief because of the tragic fate of the Queen of Scots, in whose service he was. Margaret took the desperate resolution to avenge his death; so, disguised in male attire, she proceeded, with a concealed brace of pistols, to the English court, with the intention of killing the queen with one and herself with the other. One day, when her majesty was walking in the garden of the palace, Margaret made her way through the crowd so as to get near enough to make sure of her aim, but in her excitement she dropped one of the pistols. She was instantly seized, and would have been hurried away to prison but Elizabeth said " she would examine the young man herself."

[A.D. 1589.] When brought before her Margaret bravely acknowledged who she was, her intended action, and its cause. The queen heard her patiently; then not 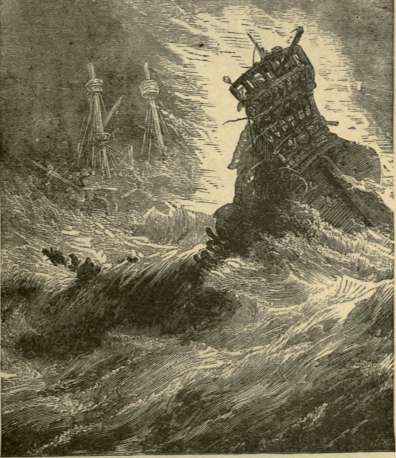 DESTRUCTION OF THE ARMADA.

only granted her a full pardon, but provided her with an escort to France, as she had requested.

Many persecutions on the score of religion succeeded the victory over the Spanish Armada, and one of the greatest grievances of Elizabeth's reign was known as the privy seal loans. Whenever an individual was known to have amassed a sum of money her majesty's ministers would borrow for the royal treasury. To be sure, they paid a liberal interest; but there was no security for the principal, besides the sovereign's promise to pay, which, it is easy to see, would have been valueless in the event of deatW

* After the death of Leicester, Essex, who had been created Knight of the Garter, succeeded to the queen's favor; but while she was showing him the utmost consideration he excited her wrath by marrying the widow of Sir Philip Sidney, the illustrious soldier and statesman, who had been killed at the battle of Zutphen. He was at once replaced by Sir Robert Cecil, and when Henry HI. sent to England for aid to defend himself against the Spanish invaders, he injured his cause by saying that Essex approved of his demand; for Elizabeth replied, " That the Earl of Essex would have it thought that he ruled the realm, but that nothing was more untrue; that she would make him the most pitiful fellow in the realm, and instead of sending the King of France more troops, she would recall all those she had already lent him." Having said this she haughtily swept out of the room, and would have nothing further to say to the ambassador.

[A.D. 1592.] Later, when Essex showed prompt obedience at the queen's command for his return to England, she was so pleased that she entertained him with feasts, and sent him back to France honored with the highest distinction. Every request he made was granted almost before

it was considered. Nevertlieless, Elizabeth's capricious nature asserted itself when Ireland was in a state of revolt, and there was difficulty in finding some one to fill the post of lord-deputy over the distracted country. On that occasion Essex peremptorily insisted that Sir George Carew was the proper man.for the office,- whereupon, forgetting how by numerous indulgences she had encouraged him to speak freely, Elizabeth felt so offended at his positive tone that she lost her self-control, and giving him a sound box on the ear, bade him " go and be hanged."

Essex was so indignant that he swore a horrible oath, and impertinently adding something about " a king in petticoats."

Later the royal mind was changed again, and he was sent as lord-deputy to Ireland.

While there, he was so unmindful of the queen's orders that he was accused of treason, and on his return shut up in the Tower. He had many enemies, and Cecil so prejudiced the queen and her court against him that he was condemned to die.

[A.D. 1601.] Elizabeth hesitated as long as possible before signing his death-warrant. She had given Essex a ring when he was in favor, with the promise that if ever he offended her the sight of that token would insure forgiveness. The imprisoned statesman did send the ring by a boy who chanced to pass his prison window one morning ; but by an unlucky accident it fell into the hands of the lord-admiral, a deadly foe of Essex, who said nothing about it. The queen concluding that her former favorite was too proud to sue for forgiveness, because the ring she had been expecting did not reach her, ordered the execution to proceed.

The English nation could not forgive the death of the generous and gallant nobleman, and the queen was no 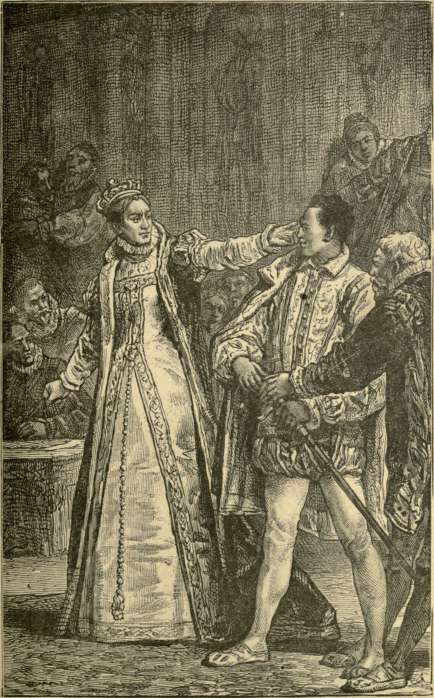 ELIZABETH BOXING ESSEX ON THE EAR.

longer received with cheers when she appeared in public. She did not fail to notice the change in her subject's feelings towards her, and this made her excessively unhappy. A deep depression took possession of her, and though she tried to appear gay her heart was very heavy. Several attempts were made on her life from time to time as she advanced in years, but fortunately each was frustrated.

Literature made rapid strides during Queen Elizabeth's reign, particularly all that was written in Italian, which language her majesty understood well. Many dramatists rose to distinction at this period, the greatest being William Shakspeare. Spenser and Sir Philip Sidney added lustre to this reign also.

Elizabeth's last parliament was summoned in the autumn of 1601. She performed the ceremony with more than her customary display; but she was in such feeble health as to be unable to support the weight of the royal robes, and she was actually sinking to the ground when a nobleman, who stood near, caught her and supported her in his arms. She rallied and went through the fatiguing ceremony with her usual dignity and grace.

The science of medicine was in such a rude condition in the sixteenth century that the wealthy were treated with doses of pulverized jewels or gold. The poor had the best of it; for they were obliged to depend on herbs and ointments, which certainly must have been more efficacious.

Queen Elizabeth had so little confidence in doctors or their prescriptions that she could not be induced to consult them even when she was very ill.

[A.D. 1603.] Her last sickness began in March, 1603, and when she was urged to seek medical aid, she angrily replied : " That she knew her own constitution better than anybody else, and that she was not in such danger as they imagined." She grew worse, however, and died two weeks

later, in the seventieth year of her age, and the forty-fourth of her reign.

She was buried in Westminster Abbey in the same grave with her sister. Mary Tudor. Her successor, James I., erected a monument to her memory. On a slab of pur^i white marble the effigy of this remarkable queen lies beneath a stately canopy. Her head rests on embroidertd cushions, her feet on a couchant lion. Royal robes hang around her form in classic folds, and her closely curbed hair is covered with a simple cap. She has no crown, »he sceptre has been broken from one hand, also the cross from the imperial orb which she holds in the other.

That learned English philosopher, Lord Bacon, has written of Queen Elizabeth: "She was pious, moderate, constant, and an enemy to novelty. She hated vice, and studied to preserve an honorable name. No age has evei produced her like for the government of a kingdom." 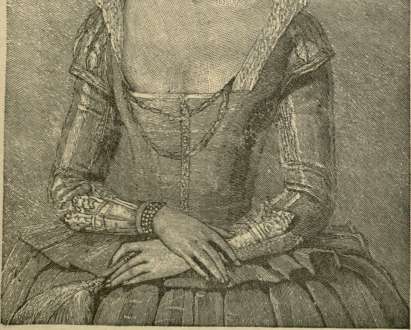 Notice Me by Turley, Rebecca
Raining Light (Fate's Intent Book 5) by Bowles, April
The Last Queen of England by Steve Robinson
Your Room or Mine? by Charlotte Phillips
Chicks in Chainmail by Esther Friesner
Circle of Treason by Sandra V. Grimes
The Cup of the World by John Dickinson
Festival of Deaths by Jane Haddam
Payoff Pitch (Philadelphia Patriots) by V.K. Sykes
The Other Mitford by Alexander, Diana
Our partner