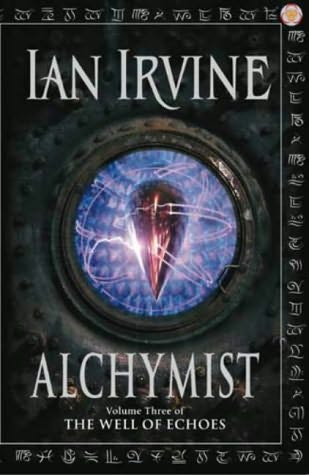 A Tale of The Three Worlds

Volume Three of
The
Well of Echoes

The
mud was made from earth and blood, organs and entrails, for the battle had
raged back and forth until the dead carpeted the ground. It was the most
ghastly sight Irisis Stirm had ever seen, and after a day and a night she was
still stuck in the middle of it. The flower of humanity's youth was being
slaughtered outside the walls of Snizort, and there was nothing anyone could
do.

Dropping
her broken sword in the mire, Irisis took up a sound one. There were plenty to
choose from. 'Scrutator,' she said as they climbed a little knoll, boots
skidding in the wet. The rising sun picked out red eyes in their dirty faces.
'What are we going to do?'

'Die'
Xervish Flydd grimaced. 'This marks the end of civilisation, of everything I've
fought for all my life.'

'Very
noble of you, Irisis.'

'There
isn't. There's too many of them and they're killing us twice as fast as we're
killing them.'

Irisis
looked around. 'Let's try and get to the command post. It's not far now.' It
stood on a flat-topped hill away to their right, and the Council flag still
fluttered there. 'At least we'll be able to see what's going on.'

'Then
she's got more sense than the rest of us. What about Pilot Hila?'

'She
was killed in the first attack yesterday morning, not long after the
air-floater crashed. You stood over her, holding the enemy off, until she
died.'

Flydd
shook his grizzled head. 'I don't remember. I can hardly remember anything
about the past day.'

'I
remember every minute,' said Irisis, 'and I wish I didn't. Come on.'

A
lyrinx staggered out of the wallow to their left. The creature stood head and
shoulders over Irisis, who was a tall woman, and its great mouth could have
bitten her leg off. One leathery wing dragged in the bloody muck; a mighty arm
had been severed at the elbow. It slashed feebly at the scrutator, who swayed
backwards then lunged, plunging his sword between the armoured skin plates and
into its heart.

The
creature fell into the red mud, splattering it all over them. Flydd did not
even look down.

'Where
did you learn such swordsmanship, Xervish?' said Irisis. The scrutator was a
small, scrawny man, past middle age. She had seen him fight before, but never
with such deadly efficiency as in the past day.

'The
scrutators have the best of everything, so I was taught by an expert. Even so,
that move wouldn't have worked on an able-bodied lyrinx.'

They
passed between two clankers — eight-legged mechanical monsters big enough to
carry ten soldiers and all their supplies. The one on the left looked intact,
though a headless man lay on the shooter's platform up top, slumped over his
javelard, a spear-throwing device like a giant crossbow. Another body was
sprawled on the catapult cranks. Once the node had been destroyed its field
vanished, and the clankers became useless, immobile metal.

A
lone shooter stood behind the loaded javelard of the right-hand machine,
training his weapon back and forth across the battlefield. He fired, and the
heavy spear was gone too quickly to trace, taking a distant lyrinx full in the
chest.

The
soldier shook his head. 'Not good enough to save us, sum' He jumped down. 'It
was my last spear.'

The
soldier turned out the inside of his jerkin. Irisis caught a flash of silver.

The
scrutator stopped dead. 'You earned that with a sword?'

'And
a long knife, surr. At the battle for Plimes, two years ago.'

'I
need a good man with a blade. Find yourself a weapon and come with us.'

Irisis
was astounded. The scrutator was known for decisiveness, but to select a
stranger so quickly was unprecedented. 'I hope you're a good judge of
character,' she said out of the corner of her mouth as they slogged through the
bloody mire.

'That's
what I mean.' She grinned. Irisis, with her yellow hair and that long, ripe
figure, was a beautiful woman, even covered in mud and gore.

'That
was no badge. It was the Star of Valour, and it falls to few living men to wear
their own.'

They
angled across the field towards the command-post hill, skirting a wallow in
which lay the head of a soldier like a single flower in a brown bowl. The eyes
stared right at them. Irisis looked the other way. They'd seen a thousand such
sights in the past day but still it made her stomach roil.

'Your
name would be Flangers, would it not?' said the scrutator.

'That's
right, surr/ said the soldier. 'How did you know?'

'It's
my business to know the names of heroes. Do you know who I am?'

'Of
course. You're the People's Scrutator.'

'Where
did that name come from?' Flydd exclaimed.

'I
can't say, surr,' said Flangers. 'The soldiers have always called you that.'

Disrespectful
louts,' growled Flydd. 'I'll have a detachment or two whipped, and then we'll
see if they dare such cheek.' There was a twinkle in his eye, though, and the
soldier saw it.

Irisis
chuckled. Flydd liked to be in control and to know everything; it was a rare
sight to see him surprised. 'I'm Irisis.' She offered Flangers her hand.

'You're
not from these parts, Flangers?' the scrutator went on as they began to climb
the hill.

Flangers
shook his head. He was grey eyed and fair haired, with neat, sunburnt features
set off by a jutting jaw. Though not overly tall or muscular, he was lean and
strong. 'I'm a Thurkad man,' he said, staring blankly at a pair of bodies that
lay side by side without a mark on them. The swarming flies were already doing
their work.

'Refugee?'
asked Flydd. Thurkad, the greatest and oldest city in the west, had fallen two
years before, ending the resistance on the great island of Meldorin.

'No.
I joined up when I turned fifteen. Six years ago.'

'Did
you see much fighting before Plimes?'

Flangers
named half a dozen battlefields. 'More than I care to remember.'

'You
must be a fine shooter,' said Irisis, 'to have survived all those.'

Flangers
helped him up. 'It ran out today. I've not lost an operator before.' He was not
bitter about it, though many a man might have been. 'We're done, surr. It's
over.'

'You're
a hero, Flangers. You can't talk like that.'

'I've
seen whole nations wiped out, surr. The ancient wonders of my homeland are no
more, the millions who dwelt there dead or scattered across the globe. Even
Thurkad, the greatest city the world has ever seen, lies empty and in ruins.
There's no hope left. The enemy will eat us all.' He gave a little shudder of
horror. 'Even our little children.'

'You
know the penalty for despairing talk, soldier?'

'For
many of the common folk, death at the hands of the scrutators is preferable to
being torn apart and eaten.'

'Yet
despite your despair you fight on.'

'Duty
is everything to me, surr,' said Flangers.

'Then
may you take comfort from doing your duty. Give me a hand up here, would you?1

Taking
the scrutator by the elbow, Flangers helped him through the steep pinch to the
top of the hill. At the edge, Flydd took Irisis's arm and moved away. Tell me,
Irisis, do you despair as well?'

'Be
careful where you put your faith. I'm just a man. I can fail, or be brought
down as easily as any other man.'

'Flangers
has shaken me, Irisis. The people now see death as their only escape. Despair
will bring us down more quickly than a horde of the enemy, and how can I
counter that?'

'With
a bold strike; a miraculous victory.'

'It
would take a mighty miracle to save us now.'

'Then
you'd better think of a way,' she retorted, 'We're counting on you, surr, and
you can't let us down.'

On
top of the hill was an oval of cleared land, almost as flat as a tabletop,
containing a large command tent in the centre and clusters of smaller ones to
either side. A wall of guards lowered their spears to let them through. Inside,
a line of crossbowmen held weapons at the ready. The lyrinx always attacked the
command post first, if they could get to it.

Flydd
nodded to the captain of the guard, then turned to look over the battlefield. A
shadow passed across his face and he made for the command tent.

General
Tham, a bouncing ball of muscle topped by a shiny bald head, met him at the
flap. 'Scrutator Flydd! We'd given up hope of seeing you —’

Tham
plucked at an ear the shape and colour of a dried peach. 'We've lost fourteen
thousand men, dead, and another six thousand will never fight again. The Aachim
have lost six thousand and, even with their grudging aid, we're failing fast.'

'Even
before the field went down, the Aachim never gave what we asked of them. They
always hung back. And since then, I've seen only defence of their own lines.
When we counterattack, they never come with us .. .'

'It's
a long time since they've fought to the bitter end,' Flydd mused, 'knowing
that, if they lost, all would be lost. Their noble exterior, it seems, conceals
a rotten core. More than once they've failed in the uttermost hour, when the difference
between victory and defeat was simply the courage to fight on, no matter what
the odds. Even so, the Histories tell us that the Aachim have more often fallen
through treachery than military might. Well, General, if that's the kind of
allies we have, we must fight all the harder.'

And
die all the sooner. I beg you, Scrutator, allow me to sound the retreat or by
dawn there won't be a man left.'

'Sound
it,' said Flydd, 'though if the enemy truly want to destroy us, that will give
them the chance to do the job by nightfall.'

'You
doubt that they do?'

'It's
doesn't seem to be their main objective,' said Flydd.

'Then
what are they really here for?' Tham exclaimed.

Tham
gave orders to his signaller, who ran to the edge of the hill. Horns began to
sound. Irisis watched the scrutator from the corner of her eye as he paced back
and forth, looking sick. Nothing had gone right since they'd come to Snizort.
The Council of Scrutators had ordered him to destroy the lyrinx node-drainer,
for similar devices at other vital nodes had immobilised clankers and led to
the destruction of the armies they escorted.