Read All of Me Online 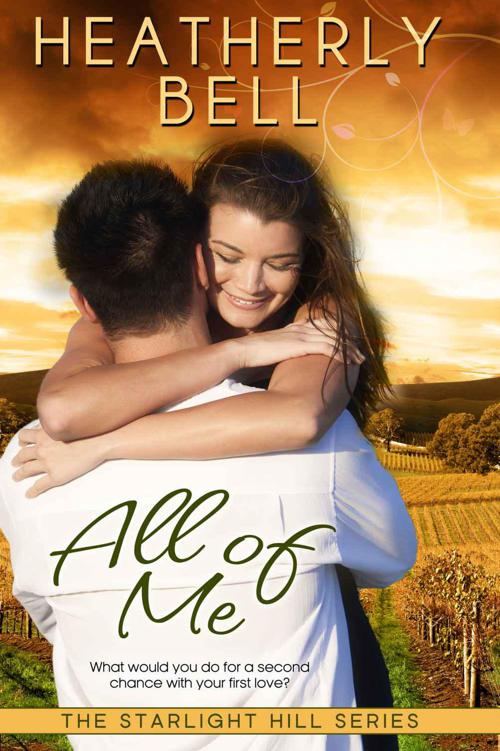 Cover by The Killion Group

Thanks to Melissa Dean, midwife at A Little Miracle Midwifery who spent an hour with me talking about midwives and doctors. Thanks also to my cousin Dr. Vicente Font, who talked to me about residency. Any mistakes made are all my own, or may occur in the course of an author taking creative license.

Thanks go to my critique partners, Golden Heart finalist Lee Kilraine for reading both versions of All of Me, and to authors Amy Lamont and Bailey Edwards for their input and encouragement.

Special thanks to my early readers Beth Hill (who bears no resemblance to Beth Lancaster other than her first name), Ellen Wilcox, and of course, Mom.

What would you do for a second chance with your first love?

Welcome to wine country and the small town of Starlight Hill, California, where the wine flows freely and so does the gossip.

The town has never quite forgiven Ivey Lancaster for leaving their favorite son, Dr. Jeff Garner, when she met a man on an online dating site. But while the people of the township took sides, the truth of her absence is something Ivey doesn’t want anyone to know.

When a sudden change of plans forces Ivey to work with her hunky ex, she must keep it professional or risk her heart all over again.

Instead of being ushered to HR to sign employee paperwork and W2 forms, Ivey Lancaster had been sent to the medical director’s office.

Probably some minor mix-up with the paperwork. By now they’d received the glowing letter of reference from her mentor, Babs Holiday. Ivey was more than qualified for the midwife position at the new women’s center.

Deep breath.
You’ve got this
.

Finally, Dr. Lillian Walker walked into her office. “I apologize, but I’m running behind this morning.” She shook Ivey’s hand. “We’re on my son’s third babysitter. He’s four, and the master of his universe. In other words, he’s going to grow up to be a surgeon.” Lillian sat behind the futuristic-looking stainless steel desk, drew in a deep breath and leaned back in her chair.

Uh-oh.
“Is something wrong?” Ivey asked.

Lillian picked up a file, stared at it, and put it back down. “You could say that. This morning I found an orderly and a nurse in a closet, and they weren’t looking for supplies. Dr. Harrison has taken an ill-timed vacation, since his wife threatened that if he didn’t come along she’d go by herself and not come back. So I’m short staffed again. And then there’s this desk. Who ever heard of a desk without drawers? It’s beautiful, but why do I feel like I’m Uhura on Star Trek? I’d like to strangle the designer.”

Ivey wished she could help, but she had her own problems. Aunt Lucy had a broken leg, and she’d be waiting at home right now. Wondering if her niece would get the job. So if Lillian could get on with it, that would be nice.

“And then there’s the women’s center, and the midwife position.” She scowled.

Ivey tensed at the overpowering scent of Lillian’s lavender perfume, causing a sudden memory of Mom. On a good day, Mom had always been in Ivey’s corner. On a bad day, Mom couldn’t find the corner.

But this didn’t make sense. Lillian had practically promised the job to Ivey.

Great. Could any good news start out that way? “So there’s a problem.”

“You guessed it. I’ve run into some objections from the obstetric doctors on staff.” Lillian sighed and tapped a manicured nail on her desk.

This didn’t come as any surprise. Ivey had dealt with territorial doctors before, but Lillian had filled her mind with thoughts of a progressive hospital. “But you said ...”

“I know, and I’m sorry, Ivey, but I can’t hire you. I can’t hire anyone right now. The work requisition has been held up due to the doctors’ objections. They went to the board. Behind my back.” Lillian’s lips were a thin, straight line.

“Think about what it’s like for me as medical director of this hospital. The first female director. Our small hospital has been overwhelmed with budget cuts—”

“But this is why you would save money with the midwifery program. The hospital can save money when a midwife delivers a baby,” Ivey said, but suddenly the problem dawned on her like a pink zebra in the room. Doctors, pressed between onerous HMOs breathing down their backs and struggling hospitals, felt their livelihoods threatened. She’d heard this story before.

“You can imagine how well it went over with the doctors on staff. I only have three of them on the L&D floor. It’s hard enough to keep them here. Malpractice insurance costs, rising health care costs, and now the Affordable Health Care Act.” Lillian waved a hand in the air.

Ivey sank in her seat. “I see.” Until this moment she hadn’t realized how much she wanted the job. She’d gotten used to being home again, among the hills and rambling vineyards of Starlight Hill in Napa Valley. Aunt Lucy constantly complained about its appalling lack of nightlife, but Ivey loved the quiet and the time to reflect. She’d been gone too long, kept away mostly by memories too tender to face even after all this time.

But she was back now, and that said something. It said Ivey Lancaster was ready to move on and make a life.

Now she’d have to find Plan B. Damn doctors. “Well, thank you for your time.”

Ivey started to get up, but Lillian spoke again. “Unless, and I can’t ask for this—” Lillian’s steadfast brown eyes settled on Ivey.

As it happened, Ivey had been fighting for one thing or another most of her life. Did she like a fight? Yeah, but only if she could win.

“I thought so. I’ll be honest. I had a feeling it would be difficult to get this idea past the doctors. But it’s time for some changes around here. And I saw something in you I didn’t see in the other candidates. You don’t give up easily, do you?”

She didn’t. A person with dyslexia didn’t get through life without engaging in a metaphorical fight or two. Or three. “True.”

“If you’ll help me, I believe we could make this vision of ours a reality. Since the doctors’ objections, the board has arranged for a subcommittee to oversee the decision. They’ve appointed one doctor to represent them, and I’d like to appoint you.”

“Me?” She was a midwife, not a committee member.

Every time she’d had to make a presentation in school she’d clammed up. It had meant PowerPoint slides and reading out loud, and with her dyslexia, that was not a good time. She’d finally memorized every last word so that she wouldn’t have to rely on any reading.

The whole idea was out of the question. “Sorry, I’m not a good speaker.”

“You won’t have to present. It’s simply a written recommendation to the Board. What I need is someone who believes in my vision—someone who shares it with me.”

“I want our new women’s center to eventually have a staff of midwives available. Women who have low-risk pregnancies deserve that choice, don’t you agree?”

“Well, of course I agree.” But that wasn’t the point. The point was she wasn’t going to be on any committee, sub- or otherwise.

“Thank you! You won’t regret this. The doctors have appointed a first-year resident to the subcommittee. Some requirement by one of the benefactors. Don’t ask me why, but surely the two of you can get along and come to some sort of compromise. You’re both young, so you’ll be flexible.” Lillian stood up.

“But I—” When had she agreed to do this?

“Follow me. I’ll find the resident they’ve appointed, and maybe the two of you can arrange the first meeting.”

She hadn’t agreed to anything, and yet why were her feet following Lillian like they had any good sense?

Lillian led her to a conference room and waved towards a chair. “I’ll be right back once I find him. He’s an ER resident, so if he’s here at all, that’s where he’ll be. Sit tight.”

Ivey didn’t sit. She’d rather stand, thank you. Pace, more like it. She might  pace her way right out of this conference room and right through the front doors of St. Vincent’s Hospital. Hop in her SUV and drive back to the Vineyard Cottages where Aunt Lucy would be waiting.

But she did want this job, and the fact remained that a first-year resident wasn’t going to be all that intimidating. No, she could handle him.

Then the door opened, and Ivey’s world shifted off its axis. She dropped into a chair before she fell down. This. Wasn’t. Happening. “What the hell are you doing here?”

Jeff Garner should not have walked into the conference room like he had any business being here. He was supposed to be away in another state, completing his residency.

He met her eyes. “I was going to ask you the same thing. I’m here for a subcommittee meeting.”

“Good, because I wasn’t trying to be.” Jeff took a seat on the other side of the table. As far away as he could get from her, because he was good at that. Interesting how some things never changed.

“Why aren’t you in Maryland?”

“Because that would be a hell of a commute.” He leaned back in his seat.

“Funny. So I guess you’re no longer doing residency in Maryland. This isn’t going to work.”

Lillian breezed in. “Oh good, you’ve met. You two are the chosen subcommittee to meet and make a recommendation to the board on whether the women’s center will add midwives to the staff.”

Ivey stood and took a few steps toward Lillian. “Excuse me. Wait a minute.”

“Is there a problem?” Lillian turned to Ivey, eyebrows raised with the classic there-had-better-not-be-a-problem-because-I-trusted-you look of a superior.

Ivey glanced over at Jeff, who was smiling.
Yes, there’s a problem. I didn’t agree to this. Especially not with him.
“Not at all.” She couldn’t give him the satisfaction of knowing he upset her that much.

Shadow of the Sheikh by Nina Bruhns
Frenched Series Bundle by Melanie Harlow
A Girl Like Gracie by Scarlett Haven
Shifting Currents by Lissa Trevor
Handcuffed in Housewares: Tulle and Tulips, Book 3 by Nikki Duncan
One Tough Cookie by E C Sheedy
Tales from the Town of Widows by James Canon
Royal's Bride by Kat Martin
Kisses and Revenge by Riser, Cherron
Lethal Exposure by Lori Wilde
Our partner