All the Dead Yale Men 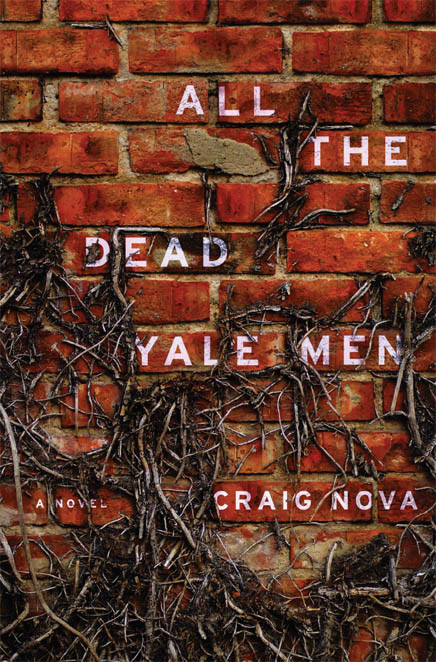 ALL THE
DEAD
YALE MEN 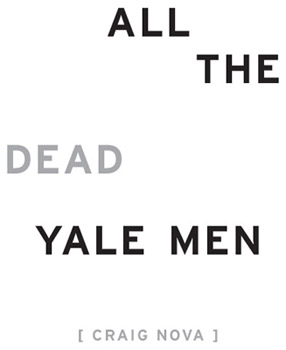 All the dead Yale men : a novel / Craig Nova.

ALL THE
DEAD
YALE MEN
Contents

THE ODD THING
is that when I looked into how I was being cheated, not because of the money but because of the principle of the thing (fathers shouldn't cheat sons), I discovered things about my family, and my grandmother in particular, that I never dreamed possible. Dark indeed are the family secrets that never quite disappear.

Of course, everyone thought my father, Chip Mackinnon, was a spook. They confirmed this suspicion by the number of spooks who showed up at his funeral. I knew more definitely than that, since he was cheating me, and I wanted to find out not only why, but how, too. It wasn't hard to catch him at the spy part. He wasn't a very good spy, but then this ease of catching him explains why the CIA is such a bunch of fuck-ups and incompetents.

The cheating was another matter.

I was going to bring up the fact that he was cheating me on the day he died, which began with what would have been a high-speed chase and crash on Memorial Drive in Cambridge, Massachusetts. That is, it would have been a high-speed chase if the cops had been around to see it. I was going to mention the cheating as leverage, since I needed advice, and the kind of advice that only my father could give. He may have been a fuck-up, but he was good in a bad spot. And since I was in a bad spot, who else could help?

But he
was
a good man in a bad spot, and this was the trouble: he had been in so many bad spots that he couldn't take ordinary life too seriously.

And what is real trouble? Well, my father had been a pursuit pilot in the Second World War. He trained in Texas and was shipped across the Atlantic on an aircraft carrier, from which he took off and flew over Africa with the green canopy of the jungle below and the perfect circle made by the blur of the propeller. He ended up in North Africa, and there he was shot down as he tried to bomb Rommel's headquarters. Then it was three years in a prison camp in Poland, but when the war was ending, he and the other men in his camp were marched back to Germany. This was in the winter of 1945. It was snowing, and the men walked along the road, their jackets thin and worn, and often they had only rags tied to their feet for boots, which were black here and there where the bleeding sores from frostbite oozed through the cloth. The woods were mostly pine, dark trunks topped by an evergreen shimmer. The men walked toward Germany. They ate what they could: bark, leather from belts, anything that would give them the illusion of food. A good friend of my father's, a man named Bob Walters, sat down at the side of the road in a brown ditch the color of chocolate in the snow. A guard told him to get up, and when Bob Walters shook his head, too hungry to go on, the
guard shot him in the head. The other men trudged toward the west, not even looking at that corpse in the ditch. Many others sat down and died, their eyes, my father said, looking at someplace infinitely far away, or not anyplace at all.

My father, who had learned German in the camp, took a guard by the sleeve and jerked him around.

“We know you are losing the war,” he said. “And when it's over, there are going to be some trials. You understand? I'll make sure they know about you. That is, unless you get us some food and blankets. Right. Now.”

The guard, in his long leather coat, which was lined with fleece, in his warm boots, his winter hat, reached to his belt and removed his pistol. After all, wasn't that the way to settle this? The snow began to fall again, big flakes like soap suds, and the cool tick of them on my father's face, he said, was like the most gentle touch, a reminder of all the delicacy of life, those moments that existed, I imagine, like the thrill of being in bed with a woman you loved, the surprise of some lovely moment, a kiss, say, when you least expected it. The feet of the marching men made that odd, almost muddy sound in the snow. The guard looked into my father's eyes and my father looked back. It might as well have been just the two of them, separate from everyone else in the world. So they hung there, feeling that snow, the gentle flakes of which fluttered down to touch them on the nose and cheeks. My father told me he was drawn to the bore of the guard's pistol, the intensity of it like the night sky, or the skin of the blackest snake imaginable: the emptiness of that small hole was the place that made him think of absolutely nothing, of a kind of exhausted entropy. This is what he had left after three years of being hungry and scared. And, my father said, the darkness was familiar, since
the odor of gun oil, from the deer hunts he had been on as a kid, seemed familiar, too. The scent was almost reassuring. The guard nodded and put the pistol against my father's forehead. Black birds squawked in the woods. A soldier squatted in the snow with dysentery: the farting, gassy noise hung there like a cry of despair. The guard put the pistol away. The blankets and food appeared.

Of course, given what I faced, the threats, the possibility for disaster, I wanted advice from the man who could stand up to a German guard and who understood what it was like to be at the edge, where it was possible to vanish. He could stop on a snowy road in Poland and see the way things were and take action, too, and precise action at that. He told me he wasn't scared. The time for that was long since past.

And, as for his being a spy, well, you can make out of this what you want. My grandfather, a hard-drinking man with a love of mint juleps, and whose nose was covered with a web of veins the color of a radish, had set up a trust that paid me three hundred dollars a month. When my wife, Alexandra, and I began to have children after I had finished at Yale, just like my father, and Harvard Law, just like my father, and when I had become not a practicing lawyer but a district attorney, I needed a little extra money. So, I figured it was time to ask my father just what the hell he had been doing with the money. I had been paid three hundred a month for close to fifteen years, even though the stock market had increased a couple of thousand percent. As I say, it wasn't the money, but the principle.

The house where my father lived, alone then after his second wife had died, was off a small street in Cambridge: only four blocks long, but yet it still had a vista, or was long enough to suggest the road tapering off into the distance, and in the summertime it was shaded by trees that were so old they made an arch over the road.

In those days my father was a professor at the Fleishman School of International Relations, a breeding ground for spooks if there ever was one.

Even then, the hall of my father's house had a lingering scent of mold, as though a leak hadn't been fixed. The walls were a sort of sickly green, and the pictures on the wall had come from my grandfather's house: schmaltzy scenes, mostly, of huntsmen and hounds, water stained, too. So, I waited in the dowdy scent. I didn't think my father would take too long with his student. They were together in the living room.

My father wore a blazer and a blue shirt and a pair of gray pants, his bald head shining like a Christmas tree ornament, his hands on an open folder. He was far too intent on the paper and his conversation to notice me. On the other side of the table, Faro, one of his Latin American students, sat with the last of a Negroni in his hand, which had such short, soft fingers. This was my father's favorite drink. Vermouth and Campari. With some gin added for, as my father said, “wallop.” Faro wore clothes that must have been bought in Argentina, knockoffs of American blue jeans and sneakers. A sweater that was ten years out of date. A cardigan.

“So,” said my father. “The base you saw on your last visit home was one from Grupo de Caza or Grupo TÃ©cnico?”

“Hmpf,” said my father. “Good. Good. And I wonder if you could see the airplanes?”

“You know there's a difference between the Mirage III interceptor and the IAI Dagger,” said my father.

“I know the difference,” said Faro. “I think these were Mirage IIIs. But maybe a couple of Daggers were there, too. They are transitioning, aren't they?”

I shifted my weight from one foot to another, and the floorboards squeaked, the sound like an animal in a trap.

“Let me take a note,” my father said. “Hey, is that you, Frank? Well, go to the kitchen and get yourself a drink.”