Read All the Truth Is Out: The Week Politics Went Tabloid Online

All the Truth Is Out: The Week Politics Went Tabloid 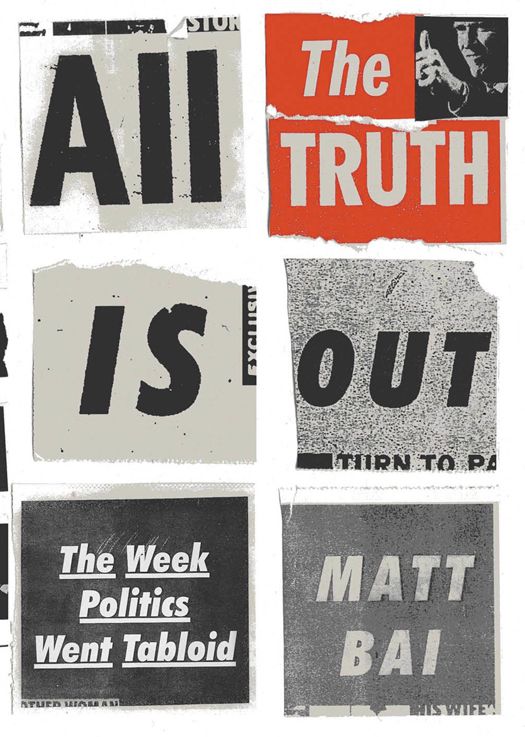 The Argument: Billionaires, Bloggers, and the Battle to Remake Democratic Politics

All rights reserved. Published in the United States by Alfred A. Knopf, a division of Random House LLC, New York, and in Canada by Random House of Canada Limited, Toronto, Penguin Random House companies.

Gatsby turned out all right at the end; it is what preyed on Gatsby, what foul dust floated in the wake of his dreams that temporarily closed out my interest in the abortive sorrows and short-winded elations of men.

A Note on Sourcing

PREFACE
WHAT IT TOOK

ONE OF THE FIRST PEOPLE I CALLED
after I decided to write this book in 2009 was Richard Ben Cramer. This was not a call I made lightly. I had, by this time, been writing about politics for
The New York Times Magazine
for the better part of a decade, so I was not exactly a journalistic unknown. But Richard was in a different category altogether. He was one of the greatest nonfiction writers of this or any age, and his seminal, 1,047-page chronicle of the 1988 presidential campaign
—What It Takes: The Way to the White House
—was arguably the greatest and most ambitious work of political journalism in American history.

We had talked by phone in the past, and I had written about him once, but never before had I sought his counsel. I feared finding out that one of my literary heroes was just another dismissive egoist—the business is full of them—who didn’t have time to dole out advice.

About thirty seconds into the conversation, Richard invited me to lunch at the old farmhouse he shared with his girlfriend (and later wife), Joan, on Maryland’s idyllic Eastern Shore. Anytime I liked, he said, just pick a day, he wasn’t doing much other than writing. The grace of that invitation wouldn’t have surprised anyone who knew him.

The next week, I drove the ninety minutes down to Chestertown, where Richard treated me to a cheeseburger as we talked about the
craft of journalism and the book I intended to write. I had come to believe that there was something misunderstood and significant in the story of Gary Hart, whose spectacular collapse Richard had followed in
What It Takes
. I thought the forces that led to Hart’s undoing were more complicated and more consequential, looking back now, than anybody had really appreciated at the time. I had in mind a book not simply about a single, captivating episode in American politics, but also about the cultural transformation it portended.

I confessed that I had begun to doubt myself, however. Almost invariably, when I mentioned this idea to colleagues and friends in Washington, they reacted as if I might be teasing them—as if I had just said I was going to write my next book about bird migration or the Treaty of Westphalia. How could a discarded and discredited figure like Gary Hart possibly matter in the age of Obama? What did any of that have to do with the health care debate or the upcoming midterm elections? Maybe I should listen to the skeptics, I said to Richard. It seemed to me that there was a fine line between being visionary and being obstinate (Hart, more than anyone I could think of, illustrated this point), and most of us ended up on the wrong side of it most of the time.

Richard took all of this in, occasionally stroking his wispy beard or fiddling with his John Lennon–like glasses. And then he seemed to be in the grasp of a revelation, and he leaned back for a long moment and assessed me.

“You don’t want my advice!” Richard said at last. “You want my permission!”

It was true. I did want his permission—not to drill more deeply into the rich seam he had first mined back in 1987, but rather to defy the conventions of my peers.

Richard told me to honor my instincts, that the last people on earth who could discern the deeper currents of our politics were the people who covered and practiced it on a daily basis, obsessing over every poll and campaign filing. (Richard answered email only sporadically, and he probably never read a tweet in his life.) He reminded me that most of the nation’s journalism establishment
had dismissed
What It Takes
, at the time it was published, as overwritten and impossibly long, and the book had all but disappeared for many years before a new generation discovered it. Why in the world, Richard asked me, would I listen to
those
people?

You didn’t write a memorable book, he said, by giving people the story they were clamoring to read. You had to tell them the story they needed to hear.

What It Takes
is an astounding work—a contemporaneous biography of six different candidates, all portrayed from deep within their own psyches. Over the years, I have probably talked with a few dozen people who were subjects or sources in Richard’s book, and not one has ever complained of a single inaccuracy. The question you hear most often, when the subject of the book comes up, is
how
Richard did it. How did he get so many politicians and so many of their aides to open up the way they did? How did he come to find himself in their rooms, and in their cars, and frequently even on their couches for the night?

To know Richard was to know part of the answer, at least. His mind was open, his curiosity genuine and boundless. I have known celebrated reporters who give entire seminars on the art of eliciting candor from their subjects—how to put someone at ease, how to structure the questions, where to put the digital recorder. Richard trafficked in none of this witchery. His only trick was his sincerity, a yearning to understand the vantage point of whomever he was talking to. He listened, which is the most underrated skill in journalism, and probably in life.

But had Richard come along ten or even five years after he did, it’s doubtful that all the sincerity in the world could have yielded a book like
What It Takes
. Although this wasn’t clear at the time, Richard undertook his life’s defining project at precisely the moment when the rules of politics and political journalism were about to change; his book was, in a sense, a bridge between the last moment, when generations of politicians had trusted most journalists and had
aspired to be understood, and the next, when they would retreat behind iron walls of bland rhetoric, heavily guarded by cynical consultants.

You could argue, with some merit, that Richard actually helped bring about this shift in the political ethos, or at least hastened it.
What It Takes
spawned legions of imitators who sought to penetrate the minds of candidates in exactly the same all-knowing way. But most often they mistook the point of Richard’s work; where he was most interested in illuminating worldviews and reconstructing the experiences that shaped them, his disciples were increasingly obsessed with personalities and unflattering revelations, the portrayal of politicians as flawed celebrities. Where Richard built his work on mutual trust, the generation that came after him started with the opposite assumption. And the more these journalists tried to re-create the intimacy of
What It Takes
, the more unattainable their aspirations became.

After Richard died abruptly in early 2013, from the fast-spreading cancer he had essentially willed away for many months, two memorial services were held. At the small remembrance in Chestertown, the last eulogy was offered by Martin O’Malley, Maryland’s governor, who had met Richard as a twenty-one-year-old operative and had stayed close to him ever after. (During O’Malley’s first run for mayor of Baltimore, Richard would call him on his cell phone, barking out advice.) The featured speaker at the second service, at Columbia’s Graduate School of Journalism in New York, was the sitting vice president, Joe Biden, whom Richard had profiled, heartbreakingly, in
What It Takes
, and whom he still called “Joey” twenty years later. Biden made the trip from Washington on a weekend, despite the fact that his presence would go unnoted by anyone outside the room.

It’s almost inconceivable that any journalist of my generation could elicit such respect from leading politicians of the day, or could boast of true and lasting friendships with the people we write about. And most of my contemporaries would probably say that’s as it should be. Those of us who gathered in Chestertown or New York weren’t only saying goodbye to Richard. Whether we thought about
it or not, we were also closing the door on the political era whose last days he managed to capture.

During the last year or two of his life, Richard enjoyed something of a resurgence among a new set of young, web-savvy journalists in Washington who admired him as I did and who made the pilgrimage east to meet the master. He loved their passion and enjoyed their company, but he found the new political journalism perplexing, with its incessant focus on granular data and emerging demographics, its emphasis on constantly predicting winners and losers. The last time I saw him, for a public event we did together in Chestertown a few months before his death, we spent a few hours at his house, talking over tea. Richard, who had long ago given up writing about politics for writing about baseball, was weak and much thinner than when I’d seen him last, but he asked me the same questions he had asked me before.

What had happened to old-fashioned political journalism? Richard wanted to know. Where was the sense of watching history reveal itself? Where, for Christ’s sake, was the
humanity
?

Although he never had the chance to read it, this book is my best attempt to answer those questions, or at least to make more people consider them. It’s a story of the moment when the worlds of public service and tabloid entertainment, which had been gradually orbiting closer to one another, finally collided, and of the man who found himself improbably trapped in that collision, and of the way that moment reverberated through the years and through the life of the nation.

While revisiting the tragic arc of Gary Hart’s career, I found myself, inevitably, revisiting much of Richard’s prose, too. The lines that stuck with me, and that were most quintessentially Richard’s, actually didn’t come from
What It Takes
. They appeared in another of Richard’s staggeringly good books,
What Do You Think of Ted Williams Now?