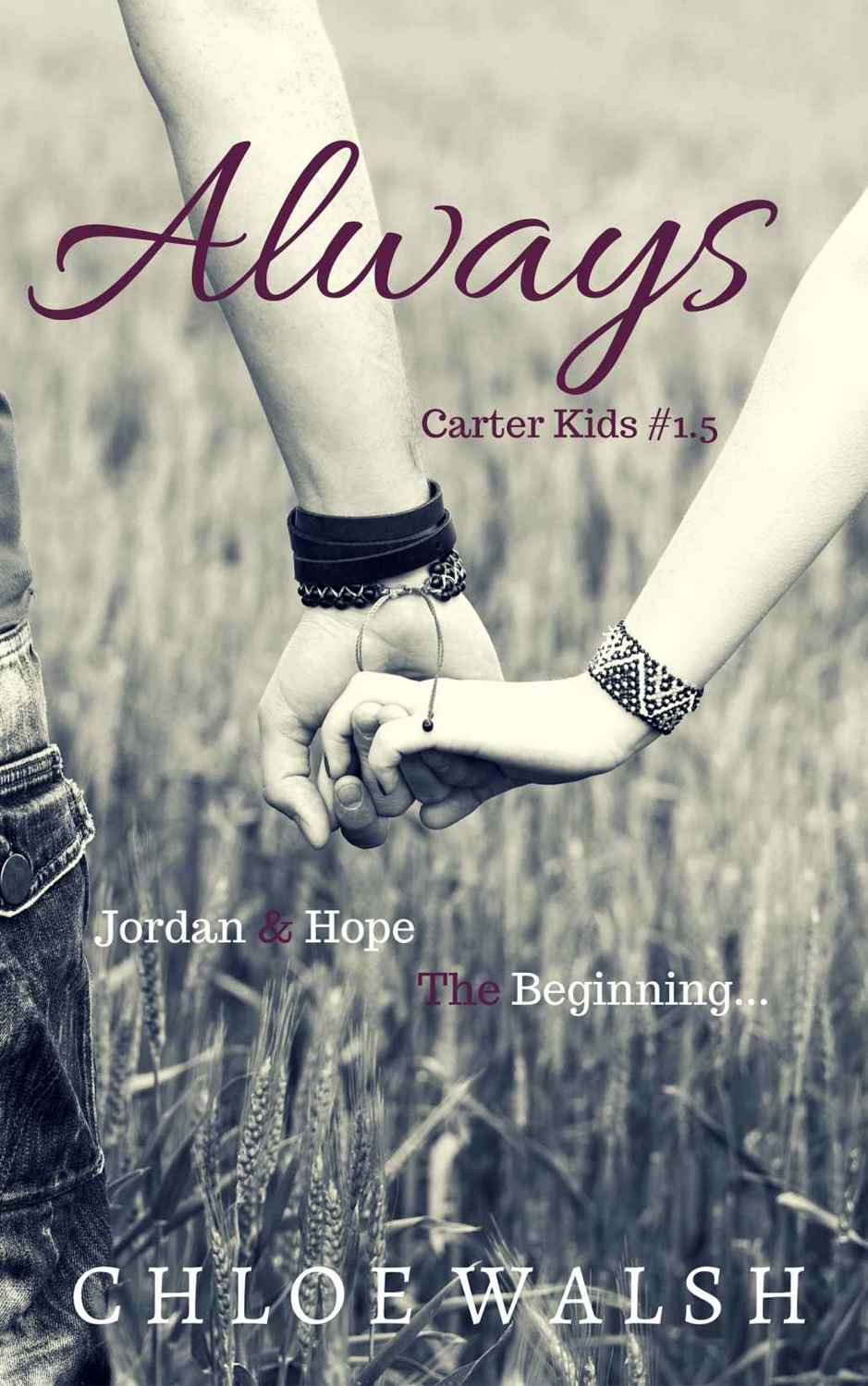 The right of Chloe Walsh to be identified as the Author of the work has been asserted by her in accordance with the Copyright and Related Rights Act 2000.

All rights reserved. No part of this publication may be reproduced, stored in a retrieval system, or transmitted, in any form or by any means without the prior written permission of the publisher, nor be otherwise circulated in any form or binding or cover than that in which it is published and without a similar condition being imposed on the subsequent purchaser.

This e-book is licensed for your personal enjoyment only. This e-book may not be re-sold or given away to other people. If you would like to share this book with another person, please purchase an additional copy for each reader. If you’re reading this book and did not purchase it, or it was not purchased for your use only, then please return to your favorite retailer and purchase your own copy. Thank you for respecting the hard work of this author.

This book is a work of fiction. All names, characters, places and incidents either are products of the author’s imagination or are used fictitiously. Any resemblance to events, locales, or persons, living or dead, is coincidental.

The author acknowledges all songs titles, song lyrics, film titles, film characters, trademarked statuses, brands, mentioned in this book are the property of, and belong to, their respective owners.

Chloe Walsh is in no way affiliated with any of the brands, songs, musicians or artists mentioned in this book.

Other books by Chloe Walsh

Upcoming titles by Chloe Walsh in 2015

Other books by Chloe Walsh

Part One: The Past

I would like to dedicate this book to my husband.

John, I love you more than life.

Thank you for my babies.

Thank you for your unequivocal love.

And thank you for being the beautiful person you are both inside and out.

Always
is the second book in the
Carter Kids
series.

It is a
novella
with a 20,000 word count and sets up the premise to Hope and Jordan's story,
Inevitable
. This novella is divided into two parts: the past and the present.

Although it is not necessary, it is advisable to read the
Broken Series
before reading the
Carter Kids
, as many of the characters are in both series.

Due to its sexually-explicit content, scenes of abuse, violence, and moderate bad language,
Always
is recommended for mature readers of eighteen years old and above.

Thank you for reading this.

"If I told you a secret, would you keep it?"

We were sitting on the edge of the dock, with our feet in the water, and Jordan had his reading glasses on. I suspected he wore them because he had been crying, but I didn’t want to embarrass him by saying so.

"I always keep your secrets, Jordan," I told him honestly. "You know that."

"I hate it there, Keychain," he whispered. I knew exactly where
there
was, and it made the anger inside me boil to the surface. Three years ago, Jordan's mom, Karen, married this shifty-looking dude from her hometown in Idaho and moved back there, taking Jordan with her.

I'd never felt pain like I had the day Karen brought him to our house to say goodbye. I had known he was leaving, but I had been absolutely convinced – and so had Jordan – that Jordan's father, Derek, would step in and stop her from leaving. Derek didn’t stop her and I lost my best friend that day.

I hated Derek for it, but my hatred paled in comparison to Jordan's.

Jordan made me a promise to me, though: a promise to return – to always come back to me. And not once since the day he left had he broken that promise. Twice a year he came for me – not Uncle Derek – and spent the majority of his vacation at my house, and I loved him for it.

It wasn’t easy for Jordan. Nothing in his life had been easy. I worried about him constantly, especially now, with that look in his eyes and that pain in his voice. He'd been home for summer vacation three days and I could tell he was different.

I wasn’t stupid, I could tell something was … off … about his stepfather, Paul, and the whole damn situation, but I just didn’t know what that something was.

I had suspicions, but no proof and I didn’t like feeling useless. If I told my parents, my Dad would charge in like a protective lion, acting on his emotions, not logic; but Mom was much cleverer.
She
would get to the bottom of Jordan's problem.

"Twenty-five days." Jordan glanced over at me, his green eyes damp. "And then I have to go back." He sighed heavily; his hand trembled next to mine, and I wasn’t sure what to do to help him. "I don’t want to go back there."

"You can come live with me." Shifting onto my knees, I turned to face him, the scuffed denim of my dungarees felt hot against my skin. It was so hot today. "I can talk to my mom," I told him. "She fixes everything. She'll talk to Dad, and he can stop them from making you go back. He can talk to your dad and tell him you're sad."

I didn’t know what to do; or how to help. I didn’t care about Jordan's mom. I cared about him. I wanted him to be happy, and I wanted him here with me.

"Don’t go back," I urged him. Something was happening to him in Idaho, and if he wasn’t so insistent I keep his secrets, I could tell my mother about the bruises I saw on his body when we went swimming yesterday, or the way he flinched when he was touched. Jordan didn’t like surprises and he cried in his sleep.

My mom would understand.

She would know what to do.

"If I asked you to do something for me, would you do it?" Jordan croaked, not meeting my eyes, as he stared straight ahead. The only parts of our bodies that were touching were our fingertips.

He looked so nice, and smelled so good, and this weird tingling sensation came alive every time I touched his skin or sat close to him. When I was with Jordan, it felt like I was bursting with happiness and was on fire with excitement. At first, I was worried because I thought there was something seriously wrong with me, but then I decided I liked the feelings he brought to the surface. I liked him. My best friend. I had a crush on Jordan Porter.

"Anything," I vowed, covering his hand with mine.

I felt his hand tense underneath mine, but I didn’t pull away.

"If I asked you to kiss me," Jordan whispered, "Would you do it?" Removing his glasses, Jordan shook his head and pinched the bridge of his nose with his free hand. "What I mean is: would you do it because you wanted to do it, or would you do it just to please me?"

I shook my head in confusion, as my stomach somersaulted around in my body. "What?"

"I need to know you'd say 'no', Hope," Jordan choked out, looking me in the eyes for the first time in what felt like forever. "I need that assurance." He squeezed my hand. "I need to know that you
could
say 'no'."

"Please don’t say that," he begged, dropping his head to stare at our hands. "Please."

"I'm sorry," I told him. Pulling my legs underneath me, I knelt, staring at the side of his face, waiting for him to turn.

He looked so incredibly troubled, and my heart broke to see him like this. He shouldn’t have the worries I sensed he was carrying. He was only sixteen years old.

He paused and held his breath for a second, before letting out a sigh and climbing quickly to his feet. "Come on – enough of the sad talk! Let's go for a swim."

He dived into the water before I had a chance to call him out on avoiding my question.

Standing slowly, I placed my hands on my hips and watched as he swam to the surface. His black curls were clipped short and soaking wet.

"You coming, Keychain?" Jordan called out as he bobbed in the water, grinning up at me. He swam closer and splashed me with water.

"You better swim fast," I shouted back through fits of laughter, as I kicked off my ratty old tennis shoes and socks. "I'm gonna catch you, Jordan Porter."

"And I'm going to let you, Hope Carter," he said with a smile.

He hit her again.

I was home three hours and that man had put his hands on my mother.

Hatred like I'd never known existed spewed through my veins, twisting my heart and forever blackening my stance on holy matrimony. But most of all I hated myself.

I hated myself because I was hiding. My mom was inside that house getting beat on, and I was hiding in the barn, crying like a baby and wishing I were back in Thirteenth Street with Hope Carter.

Clenching my eyes shut, I bit down on my fist and held as still as I could, not daring to move a muscle. I was aching all over. I had tried to defend my mom earlier, but I was too fucking weak. Paul was bigger than any man I'd ever met in my life and my crushed nose was proof of his strength.

I wondered if I held my breath long enough, remained completely still and didn’t answer Paul when he called my name, would he forget I existed and leave me alone?

But then I thought of my mom and what he would do to her instead, and the fear began to spread like wildfire through my body.

My voice was tight as I crept out from under the bale of hay and said, "I'm here."

Millions Like Us by Virginia Nicholson
Die Job by Lila Dare
Exile by Kathryn Lasky
Airborne by Constance Sharper
Stroke of Genius by Marlowe, Mia
Incredible Sex (52 Brilliant Little Ideas) by Perks, Marcelle, Wilson, Elisabeth
Strivers Row by Kevin Baker
After the Crux by Worth, Dani
Life's A Cappella by Yessi Smith
Daring Dylan (The Billionaire Brotherhood Book 2) by Jacie Floyd
Our partner