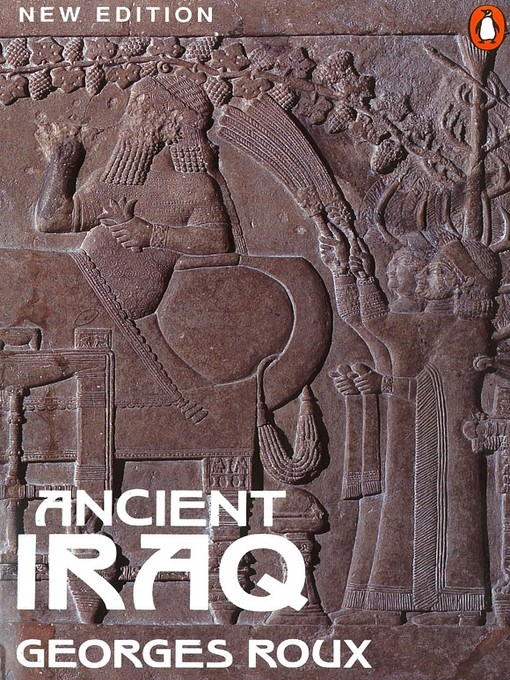 Dr Georges Roux was born at Salon-de-Provence in 1914. The son of an officer in the French Army, at the age of nine he accompanied his parents to the Middle East where he lived for twelve years in Syria and Lebanon before returning to France in 1935. He graduated in medicine at the University of Paris and practised in that city for several years; but he had by then become so interested in Ancient Near Eastern History that in his spare time he read assyriology at the École du Louvre and the École des Hautes Études, subsequently pursuing his oriental studies side by side with his medical career. In 1950 he joined the Iraq Petroleum Company as a medical officer and served for two years in Qatar and seven years in Iraq. His original research work in southern Mesopotamia and the articles he wrote for specialized periodicals such as
Sumer
and the
Revue d'Assyriologie
have won him admission to the restricted circle of professional archaeologists and assyriologists.

The moral right of the editor has been asserted

Except in the United States of America, this book is sold subject to the condition that it shall not, by way of trade or otherwise, be lent, re-sold, hired out, or otherwise circulated without the publisher's prior consent in any form of binding or cover other than that in which it is published and without a similar condition including this condition being imposed on the subsequent purchaser

FOREWORD TO THE THIRD EDITION

INTRODUCTION TO THE FIRST EDITION

2. IN SEARCH OF THE PAST
The Buried Cities of Iraq
Dating the Past
Archaeological Research in Iraq

5. BIRTH OF A CIVILIZATION
The Uruk Period
The Jemdat Nasr Period
The Sumerian Problem

6. THE GODS OF SUMER
The Sumerian Pantheon
Tales of Creation
Life, Death and Destiny

7. AN AGE OF HEROES
From ‘Adam’ to the Deluge
The Great Flood
Dynasties of Supermen
The Story of Gilgamesh

9. THE AKKADIANS
The Semites
Sargon of Akkad
The Akkadian Empire

10. THE GREAT KINGDOM OF UR
Ur-Nammu and Gudea
Shulgi, Amar-Sin and the Sumerian Empire
The Fall of Ur

11. THE AMORITES
Isin, Larsa and Babylon
Eshnunna and Assur
Mari and the Kingdom of Upper Mesopotamia

12. HAMMURABI
The Statesman
The Lawgiver

13. IN THE DAYS OF HAMMURABI
The God in his Temple
The King in his Palace
The Citizen in his House

14. NEW PEOPLES
The Indo-Europeans
Asia Minor and the Hittites
Hurrians and Mitannians
Syria and Egypt

16. KASSITES, ASSYRIANS AND THE ORIENTAL POWERS
Egypt versus Mitanni
The Time of Suppiluliumas
Assur and Susa versus Babylon

17. THE TIME OF CONFUSION
Israelites and Phoenicians
The Neo-Hittites
The Aramaeans
The Dark Age of Mesopotamia

18. THE RISE OF ASSYRIA
Genesis of an Empire
Ashurnasirpal
Shalmaneser III

22. THE SCRIBES OF NINEVEH
Mesopotamian Science
Mathematics and Astronomy
Medicine

25. DEATH OF A CIVILIZATION
The Achaemenian Period
The Hellenistic Period
The Parthian Period

Alabaster head of a woman (or goddess) found at Uruk.

A Covenant with Death by Stephen Becker
The River Flows On by Maggie Craig
Be Careful What You Wish For (A Cupcake Goddess Novelette) by Shéa MacLeod
IBID by Mark Dunn
Timothy 01: Timothy by Mark Tufo
Again (Time for Love Book 3) by Miranda P. Charles
Owning Arabella by Shirl Anders
The Wisdom of Hair by Kim Boykin
Ashes by Laurie Halse Anderson
A Drake at the Door by Derek Tangye
Our partner