Read ANYTHING 4 PROFIT (ANYTHING FOR PROFIT) Online

ANYTHING 4 PROFIT (ANYTHING FOR PROFIT) 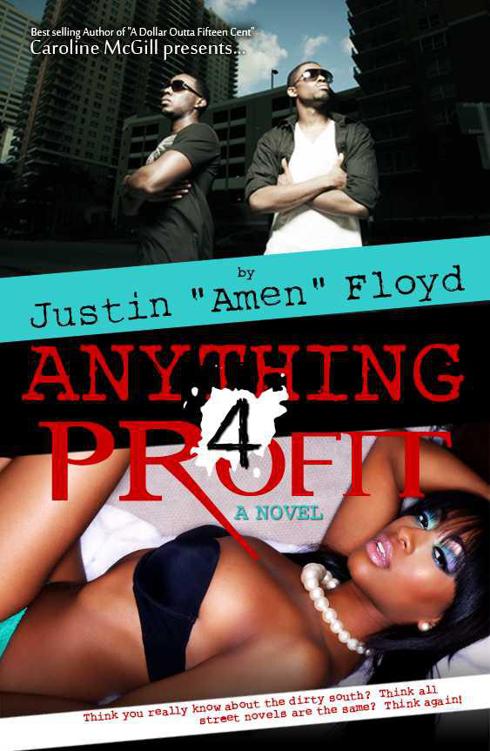 Synergy Publications - All rights reserved.  No part of this book may be reproduced in any form without permission from the publisher and author, except by reviewer, who may quote brief passages to be printed in a newspaper or magazine.

This novel is a work of fiction.  Names, characters, places, and incidents are either products of the author’s imagination or are used fictitiously.  Any resemblance to actual persons, living or dead, actual events, establishments, organizations, and/or locales is entirely coincidental.

Dedicate to my lil’ sister, Jazz

I love you “Baby Girl”… Unconditionally

BOOM! BOOM! BOOM!
The hail of shots fired from the .44 caliber cannon pierced the silence of the hot, humid summer night. It was dark, but for brief seconds, the flash from the muzzle of the gun illuminated the horrific scene taking place. A body dropped to the ground, and two figures dressed in black from head to toe fled as fast as their legs would carry them.

Left behind on the asphalt was another lifeless body of a young, Black man.  He was lying face down in a pool of blood, so his white Nike Air Force Ones slowly turned crimson.  His new Coogi jeans were now filled with the stench of piss and shit.  And his face was so badly disfigured from the gunshot wounds that if not for his teeth, his body would have remained unidentified. Needless to say, at his funeral the casket would remain closed.

This is the story of three friends from the bottom, born into poverty, pain, and despair. Those same conditions plague Blacks like a disease in inner-city neighborhoods.  And they are especially severe in the racially oppressive atmosphere of the Deep South.

Backs to the wall, and tired of being pawns in the White man’s proverbial chess game, the friends made a vow amongst themselves to get money…by any mothafuckin’ means possible!  Murder, robbery, extortion, kidnapping, or fraud.  They would do anything for profit.  And any opposition to their goals was met with savage violence.  Only those also raised in the gutter would understand or relate to their mentality. Either you rolled with them, or you got rolled the fuck over. It was real simple. No mercy, no remorse.

Like I said, this is the story of three friends, and their struggle to rise above the squalid socio-economic conditions they were born into.  Me?  My name is AMEN.  I’m just the vessel being used to bring this story to you.  Letting you see life through their eyes.  Come take a glimpse into their world.  A place where the rules and morals of American society cease to have any meaning.  To understand these characters, you have to first see how they came about…

“PUSH, PUSH!” The doctor yelled at the young girl lying on the bed in the delivery room of St. Francis Hospital. “Come on Tracy, he’s almost out.  I can see the head! Push, Tracy!”

“Tracy, listen. Give me one more good push, okay?”

Tracy pushed with all the strength she had remaining in her young, frail, weakened body, and out came a brown, wrinkled baby boy, crying and screaming at the top of his lungs.  It was like he was protesting the fact that he was forced into such a cold, callous world.

“It’s a boy, Tracy, it’s a boy,” Dr. Smith stated as he clipped the umbilical cord.  The nurse cleaned the baby off, wrapped him in a light blue blanket, and then handed the bawling infant over to his mother. As she stared at the life she had just brought into the world, the smile on Tracy’s face illuminated the entire delivery room.

“What are you going to name him?” asked the nurse on call, as she gently took the baby back.

Tracy was totally exhausted from being in labor for more than 18 hours. She whispered, “Michael.  His name is Michael.” She named the newborn baby after the man whom she had naively given her virginity and her young heart to.  The man who had gotten her pregnant. The man who had said he loved her. The man who had said he would die for her. The same man had deserted her the moment she told him that she was pregnant with his child. And yet her heart still ached at the mere thought of him.

Delivery room #2 filled with nurses and doctors, all attempting to revive the young woman who lay dying on the hospital bed, bleeding to death. But their heroic efforts were in vain. At the tender age of 16, Tracy Denise Dillinger was dead.

Her parents, who had been sitting in the waiting room throughout the entire ordeal, broke down and burst into tears when the doctor came out and delivered the heartbreaking news that their only child—their baby girl, had died while giving birth to a son that was fatherless… a bastard.

Unable to deal with the constant reminder of their teenage daughter’s sexual carelessness and subsequent death, her parents looked into the nursery at their grandson for the first and last time. After talking it over, they made the decision to put the child up for adoption.

So on the same day the world gained a new life, two were also lost. One lost to the grave, the other to the system. The date was June 16
th
1985, and that was how Mike came into the world.  All alone.

The crack epidemic grew out of control during the Reagan Administration.  It had already begun to devour the impoverished inhabitants of the ghettos of most major cities in America, but it had yet to reach smaller cities in the south like Greenville, S.C.  So fiends were still freebasing their coke in glass pipes, aluminum cans, or whatever other object that could stand the intense heat of the fire used to turn the coke into smoke, so they could inhale it and get a blast.  Smoking the cocaine instead of snorting it up their noses gave them a more intense high.

The acrid smell of freebase smoke filled the air of a house, which was really nothing more than an old boarded up shack where smokers and fiends got high.  A strong gust of wind could’ve probably blown that shit down like a piece of cardboard. Outside in the front yard, there were several old beat up Chevy’s and Fords, whose best years were long behind them. The unkempt grass and weeds were slowly devouring their rusty remains.

Inside, there were several base-heads indulging in their habit. Most notably was a young woman by the name of Gloria Davis, affectionately called Glo by her friends and family. Gloria was the epitome of the word sexy. She had size 36 D breasts, a 22 inch waist, and an onion cut to make grown men cry. With a caramel complexion and big, brown, bedroom eyes, Gloria was what men in her day would consider a “Brick-House” like that Commodores song.

But Gloria had a habit. And she would stop at nothing to support it. Over the years she’d been using, Gloria had quickly slipped and hit rock bottom.  She had done everything from sell her furniture, to sell her body to get high.

“Mmmmm, Gloria, there it is, baby! Suck that dick, girl. Yeah baby, just like that, just like that! Damn Gloria, you give the best head in the fuckin’ world, gurl.”

Gloria was on her knees with some random dude’s penis in her mouth, sucking on it as if her life depended on it. And in a sense it did. She needed that trick to get high. That’s all she lived for. With one hand working the strangers’ shaft, and the other gripping the cheap dresser for balance, she worked her head back and forth like a pro, humming and slobbering all over his dick until he released his hot seed into her mouth. Gloria pretended to swallow, and licked her lips. In her sexiest voice, she said, “Damn baby, yo’ milk sho’ taste good.”

The stranger laughed, and gathered his clothes and got dressed. He left a small bag of white powder on the dresser as payment for the excellent service he had just received, and was on his way.

As soon as the trick left, Gloria spit his thick semen onto the floor and wiped her mouth with the back of her hand.  For a brief second, she wondered what she had become. She thought of the way she had been raised.  She was from a pretty decent home.

Any reasoning in her mind was quickly overpowered by her urge to get high. She hurried over to the bag of white the trick had left on the table and fiendishly grabbed at the bag.  She tore it open and placed the contents inside an empty aluminum can she had nearby. She grabbed her lighter off the dresser, and put flame to the can until the coke turned to thick smoke, and then she took a good hit. The blissful effect was almost immediate. Gloria closed her eyes and enjoyed the feeling.  The drug provided her with an escape. She had a lot of demons, and they haunted her when she wasn’t high.

Neighborhood Watch by Andrew Neiderman
The Underdogs by Mike Lupica
El profeta de Akhran by Margaret Weis y Tracy Hickman
Tell Us Something True by Dana Reinhardt
Stuck On You by Christine Wenger
Savage (Daughters of the Jaguar) by Rose, Willow
A Natural Act (Contradictions) by R. J. Sable
Replay by Drew Wagar
The Dollar Prince's Wife by Paula Marshall
Half Bad by Sally Green
Our partner