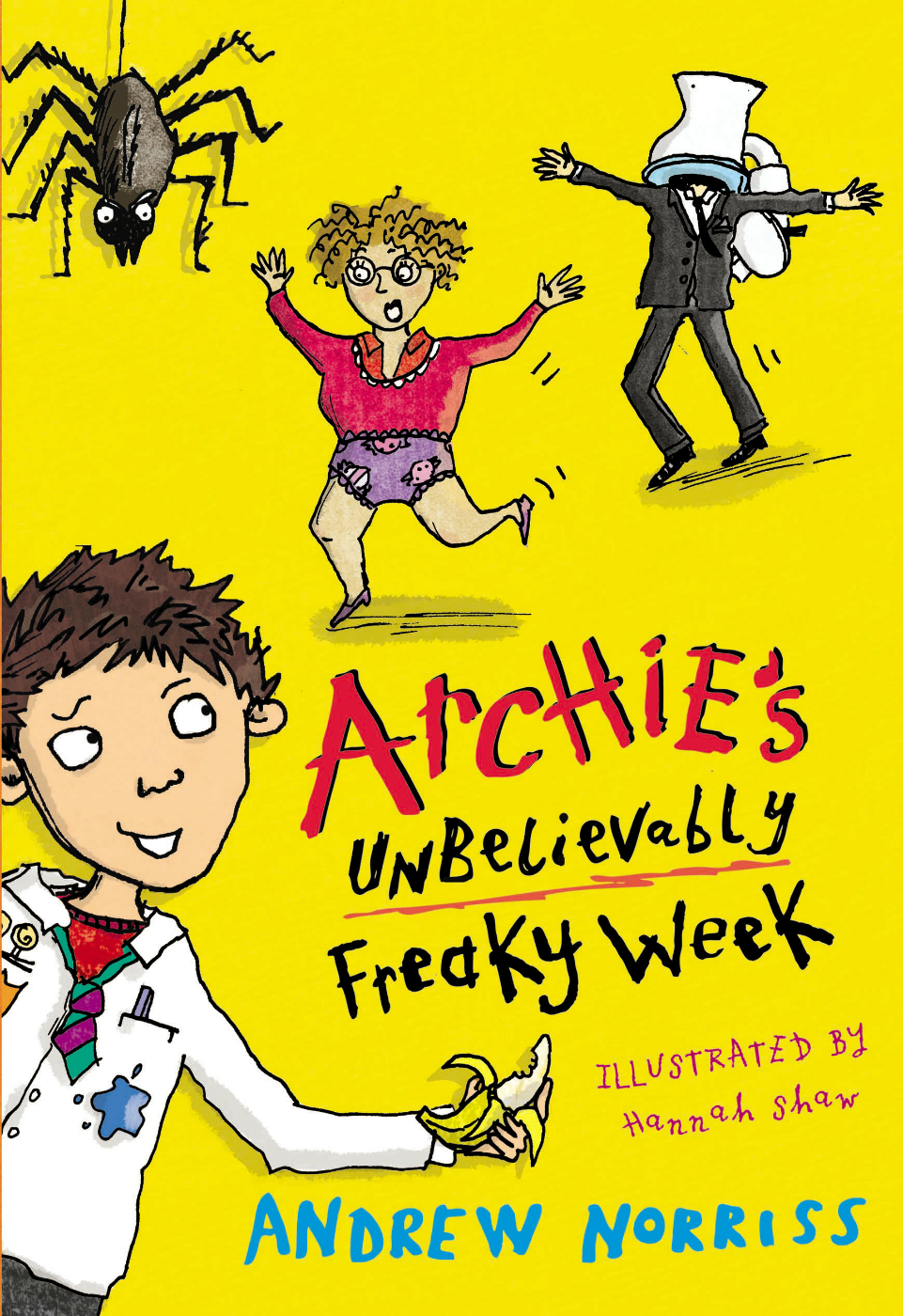 Odd things happen to Archie. Actually, not just odd but seriously peculiar. And they happen every day . . .

To kick off his school week, Archie is locked in a cupboard (accidentally), mistaken for a dog (strangely), and accused of attempted murder (wrongly, of course). Could this week get any worse? Oh yes!

Good job Archie’s best friend, Cyd, is an expert at getting him out of trouble fast. 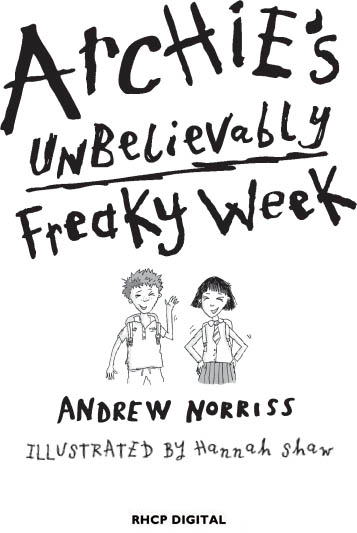 This book is dedicated to all those teachers who
cope with the Archies in their classes with endless
patience, kindness, and only the occasional
hissy fit
. . .

ON MONDAY, WHEN
Archie got to school, he found the body of Mrs Boyd, the school cook, lying in the car park.

‘Har hoo hor hi?’ he asked. He was trying to say
Are you all right?
but he had been to the dentist that morning and the injection he had been given made it difficult to talk.

‘Oh, thank goodness!’ said Mrs Boyd, when she saw him. ‘I’ve been shouting for nearly an hour, but nobody heard. I’ve got my arm stuck in this drain.’ 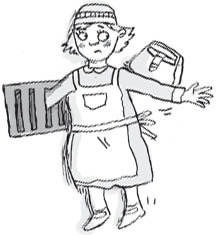 She explained that on her way into school, she had dropped her car keys. ‘They fell through the grating,’ she said, ‘so I put my arm down to get them back, but now it’s stuck. Could you go and tell someone?’

‘And could you take my bag to the kitchens?’ said Mrs Boyd. ‘It’s got today’s menu in it and if they don’t have it soon, nobody’ll get any lunch.’

‘Hohay,’ said Archie, meaning
OK
, and he picked up the bag and ran into school. 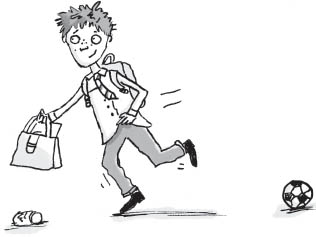 ‘Morning, Archie!’ said the school secretary, as she buzzed the door to let him in. ‘How did you get on at the dentist?’

‘Hissis Hoy,’ said Archie. ‘His hin ha harhar.’ He was trying to say
Mrs Boyd is in the car park
, but that was the best he could manage.

‘Goodness!’ The secretary smiled. ‘You’re not going to be able to talk properly for hours, are you!’

‘I’m sorry, I can’t understand a word you’re saying, but wait there. Mr Gunn wants to talk to you.’ The secretary came out from behind her desk. ‘He’s outside somewhere, but he wants to tell you about your new class teacher. I’ll see if I can find him.’

He meant
Please, you have to listen
, but the secretary had already gone.

Archie wasn’t sure what to do. He had to
tell
someone about Mrs Boyd, but if no one could understand what he was saying, it wasn’t going to be easy.

Then he had an idea.

Taking an exercise book from his bag, he tore out a page and wrote:
Mrs Boyd is in the car park, with her arm stuck down a drain
.

All he had to do now was decide who he should give the message to. He could wait for the secretary to come back with the Head Teacher, but Archie thought it might be quicker if he took it to the kitchens. Mrs Boyd had asked him to take the menu there, so he could deliver her bag and the message at the same time.

On his way to the kitchens, however, walking past the main staircase, Archie was stopped by a loud voice.

Archie looked up to see a woman on the stairs above him. She had huge muscles in her arms and legs, a tattoo around her neck, and
an
angry look on her face.

‘You’re the boy who mugged that woman in the car park, aren’t you?’ she said, ‘and then stole her bag!’ 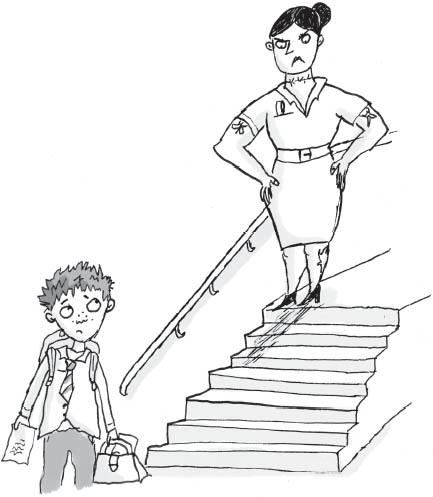 ‘Ho! Ho, ho!’ said Archie. He was trying to say
No! No, no!
but it came out sounding a bit like Father Christmas.

‘Yes, you did! I saw you from my classroom window!’

‘Ho!’ said Archie. ‘Hi hidden hoo hennyhing.’ He held out the note he had written about Mrs Boyd. ‘Here!’ he said. ‘Heed hiss!’

The woman with the tattoo took the note, read it, and her eyes narrowed.

‘Are you mad?’ she demanded.

It wasn’t quite the response Archie had been expecting.

The woman obviously didn’t believe what he had written about Mrs Boyd, so he held up the bag the cook had given him.

‘He haive he her hag,’ he said. He was trying to say
She gave me her bag
and,
as
a way of showing why he had been given it, he reached inside the bag for the menu. It was underneath a large kitchen knife so he took that out first . . . 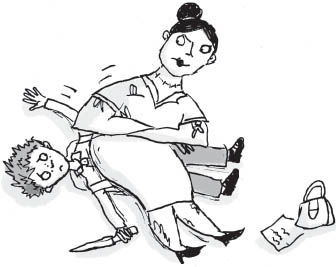 Archie was used to odd things happening to him – they happened to him every day – but all this was odder than usual, even for him.

‘I don’t believe it!’ said a voice. ‘Miss Hurrell? What are you doing?’

To Archie’s relief, Mr Gunn, the Head Teacher, was running down the corridor towards them, the secretary hurrying along behind him.

‘He came at me with a knife,’ said the woman with the tattoo. ‘I had no choice.’

‘Oh, please!’ said Mr Gunn. ‘This is Archie, the boy I told you about! For goodness sake get up and let him breathe.’

The woman with the tattoo did as she was told, and Mr Gunn asked Archie if he was all right.

‘He came at me with a knife,’ the woman with the tattoo repeated. ‘He said he wanted to kill me!’

‘Kill you?’ said Mr Gunn. ‘What are you
talking
about? Why would Archie want to kill you?’

Derailed II by Nelle L'Amour
Alien in the House by Gini Koch
Where Echoes Live by Marcia Muller
Magnificence by Lydia Millet
You Know You Love Me by Ziegesar, Cecily von
The Thirty-Nine Steps by John Buchan
Just One Drink by Charlotte Sloan
The Vespertine by Saundra Mitchell
Bhangra Babes by Narinder Dhami
Amanda Scott - [Border Trilogy 2] by Border Wedding
Our partner