Read Avis Blackthorn: Is Not an Evil Wizard! Online

Avis Blackthorn: Is Not an Evil Wizard! 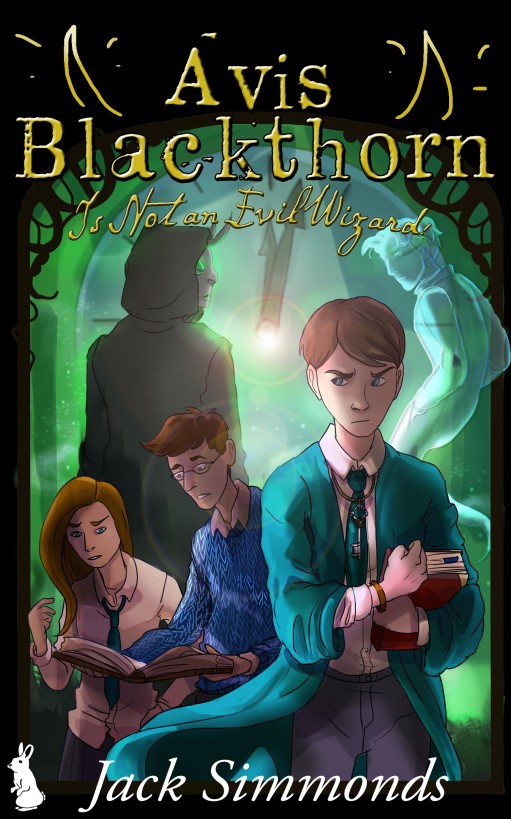 Avis Blackthorn:
Is Not an Evil Wizard!

This is a work of fiction. Names, characters,
businesses, places, events and incidents are either the products of
the author’s imagination or used in a fictitious manner. Any
resemblance to actual persons, living or dead, or actual events is
purely coincidental. All rights reserved. No part of this book may
be reproduced or transmitted in any form or by any electronic or
mechanical means, including photocopying, recording or by any
information storage and retrieval system, without the written
permission of the Author, except where permitted by law.

This ebook is licensed for your personal enjoyment
only. This ebook may not be re-sold or given away to other people.
If you would like to share this book with another person, please
purchase an additional copy for each recipient. If you’re reading
this book and did not purchase it, or it was not purchased for your
use only, then please return to your favorite ebook retailer and
purchase your own copy.

Thank you for supporting our work!

Go On a Magical Adventure 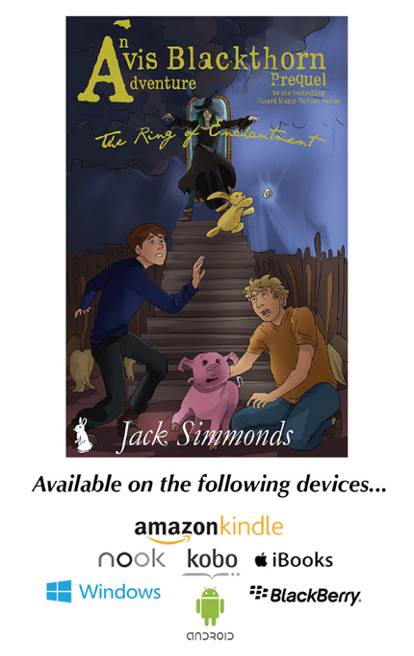 CHAPTER ONE
The Blackthorn
Family

CHAPTER TWO
The Boy from
'Yorkshire'

CHAPTER ONE
The Blackthorn Family

From the outside you would think my family
exceptionally strange. They pride themselves on being the most evil
family in all of the Seven Magical Kingdoms, a title which no one
is due to question. We, the Blackthorns, are pretty notorious.

My name is Avis Blackthorn and I am twelve
years old. I am currently at the end of my summer holidays and due,
in six and a half days, to start at Hailing Hall School for
Wizards. It’s a school for other young Wizards like myself from all
over the Magical and Non-Magical lands.

As most of you reading this will probably be
from the Non-Magical lands, or
The Outside
, as we call it, I
suppose I had better explain: we, Wizards, live in a similar
dimension to you, but separate and kind of invisible. Happendance
is the Kingdom I live in and it’s probably the second worst, after
Farkingham - which is just a black dustbowl. Happendance is all
forest and filled with stupid annoying fairytale creatures.

I can’t wait to start school and get out of
this draughty castle and away from my stupid family. Can you
believe it, Hailing Hall is a boarding school, so I get to actually
stay there, like actually live there! My last school was just a
magical theory school for youngsters just down the road, so I had
to come back every night.

The castle that my parents insist on calling
Darkampton Manor
is cold, damp and in major need of repair.
My parents never seem to have the time to do much about it (I think
they like the cold). Anyway, they are too busy working for their
beloved, evil high master - Malakai. He is the most evil high
master Sorcerer these Seven Kingdoms have ever seen. He’s killed
more people than a Wolfraptor (a huge, flying, killer wolf). In
fact, if a Wolfraptor came face to face with Malakai, it would
probably scream like a girl and fly away (no offence to any girls).
My parents are totally and utterly in love with him and think he
does tiny golden nugget poo’s. They are always talking about
him.

I’ve only ever seen him once and had
nightmares ever since. He wears this dark black hood like Death and
has these horns on his head and his hands… his hands are like black
charred skeletons hands, all bony and disfigured. He even spoke to
me once. He asked me, in his deep rasping voice like splintering
wood if I, like the rest of family, would be coming to work for him
when I left school. I didn't say anything. My Mum had tried to hide
me upstairs, not because she thought I would be scared, she
couldn't care less about that, but because she is ashamed of
me.

They all are. Ashamed of me because I am not
inherently
evil
like they are. My Mum is a hard woman, not
one to cross. She’s a terribly fierce witch who works constantly. I
have three older sisters, almost identical to her in looks and
personality. Then there’s my three older brothers, all terribly
handsome, fiercely competitive and unashamedly evil.

I am not good looking, Mum says I have a
sloped, unsymmetrical face. I am not competitive or good at
anything at all, apart from reading, but you can’t be competitive
at reading can you? Unless there’s a ‘
how many books can you
read in a week’
competition. I’d probably win that. And to cap
it all, I am in no way evil. I don’t even have the heart to kill a
fly. They all joke that they think I am either adopted or was
accidentally swapped at birth. I’m not sure.

My parents do all sorts for Malakai. They run
meetings with other Malakai supporters and organise evil things.
Toppling the government seems a priority currently.

Right now I am in one of the topmost towers,
one of the least draughty ones, seeing how long it is before they
come and drag me downstairs. The youngest sister is getting married
to some poor deluded Prince who doesn't have a clue what’s
happening. He’s under some kind of Spell, I just know it. They are
having some pre-engagement party and I have to go and ‘mingle’.
They should be up here soon, I felt a
Searching Spell
shoot
around my feet about twenty minutes ago.

The older sisters: Marianne, Gertrude and
Wendice arrived in separate carriages last night, along with the
poor Prince. My brother’s not far behind. Rory and Gary arrived
with their friends Danny, Larry and Stan. My other brother Ross
still lives at home with me and is the bane of my life. They all
made such an entrance and palaver when returning home last night,
that Wendice (the one who’s getting married) pretended to feint
until everyone’s attention was directed back on her. This is
normal.

This all proceeded with around three hundred
guests pilling in from all over the Seven Magical Kingdoms. Our
poor Irish butler Kilkenny had been making beds for the last three
months.

BANG! My door flies open. I’ve been rumbled.
It’s Gertrude, the fattest of my sisters.

“What are you doing up here when it’s
Wendice’s big day?!” she calls, loud enough for the entire castle
to hear.

Her face wobbles as it talks, which is pretty
funny. “Well get your bony backside downstairs and mingle… there’s
people down there who want to take the mick out of you. There’s
people expecting
entertainment
!” She cackles.

I am treated like a kind of performing
monkey. They ask me to perform Magic sometimes because apparently
it’s
so hilarious watching someone so rubbish
. Mum stops it
if she sees, because she doesn't want me upstaging the family. I
don't know why they don't just give me up for adoption, it would be
the best thing for everyone.

I follow fat Gertrude, her wobbly bottom
barely fitting inside a huge blue dress. I thought about telling
her that she needn't worry if she falls down the long stone spiral
staircase, because she’ll have an equivalent of about fifty
cushions to soften the fall. I don’t, just in case she sits on me
and squashes me to death.

The party was just as I expected, lots of
horrible people I know I hate who all look at me and smile
gleefully as Gertrude announces my arrival, while stuffing three
eclairs in her big wobbly gob.

I hid as best I could, keeping my head low to
avoid all dark gazes, I even hid under a table as Nasty Luke came
my way. Mind you, most people get out of the way when Nasty Luke’s
about, he stinks.

Music started soon, with some classic
Happendance folk. My brothers were all in a corner doing mini-duels
until Dad came over, his presence enough to make them scatter. Dad
is a cool guy, and an impressive figure. Standing over six feet
tall, with a stare that could topple a giant troll. He always
dresses smartly, and has recently grown a beard, which suits him. I
like my Dad - I just wish he liked me. People in the party treat
him with reverence, while others are jealous of the trust that
Malakai has in him, I just know it.

I grabbed a plate and helped myself to some
food, narrowly avoiding Mum’s homemade trout and tomato rolls
(don't ask). I sat in a corner eating my second helping of trifle,
my favourite, and just about the only normal food around here. I
noticed that there was no one my age here. Oh well, in a week I
will be out of here! Finally have the chance to make some friends
who don’t run away as soon as I tell them my name.

Mum was trying her best to impress the guests
with her trout and tomato rolls. I heard some people whispering
over by the fried spider stand that Malakai might be making an
appearance at the party. My heart froze, he better not be,
otherwise I am off.

I watched from my new hiding spot, just
inside an alcove in the wall hidden by shadow, and observed these
evil
people, who, in some way or another were kind of ugly.
I recognised quite a lot of faces from the Malakai meetings. There
were Warlords and Warlocks, Pig-people, loads of Wicked Witches
with their black cats and broomsticks, (yes, the stories are
correct).

Then my brothers found me. Creeping up on me
by disguising themselves as the wall, they think they are so clever
with their Magic. I knew they were up to something as soon as I saw
them, they had that evil glint in their eye - too much rotten apple
punch for a start.

“Oh Avis,” said Rory, the oldest. “That’s no
way to talk to your beloved brothers.”

“Yeah, we just want some fun,” said Gary
smiling malevolently, he was known for his evil smile.

Rory, Ross and Gary held my shoulder and
stood me up while Larry and Stan chuckled behind.

Rory winked at me. “Were gonna make you
evil
Avis…”

I sighed, there was no use getting out of
this. There were six of them who could all do Magic, against one of
me, who couldn't.

They stood with me at the food table, Rory
stayed close, whispering in my ear. “Right, grab that big bowl of
trifle.”

I did, too weary not to comply.

“And…” Rory chuckled then signalled to the
others.

With a flick of their fingers, the bowl left
my hands and flew into the air. It sailed right across the room to
where Wendice stood. The trifle splattered all the way up her back
as the crowd went stony silent. I turned, heart in my mouth, but my
brothers had resumed to being a grey shade of wall. All eyes fell
on me.