Read Back on Blossom Street Online

Back on Blossom Street 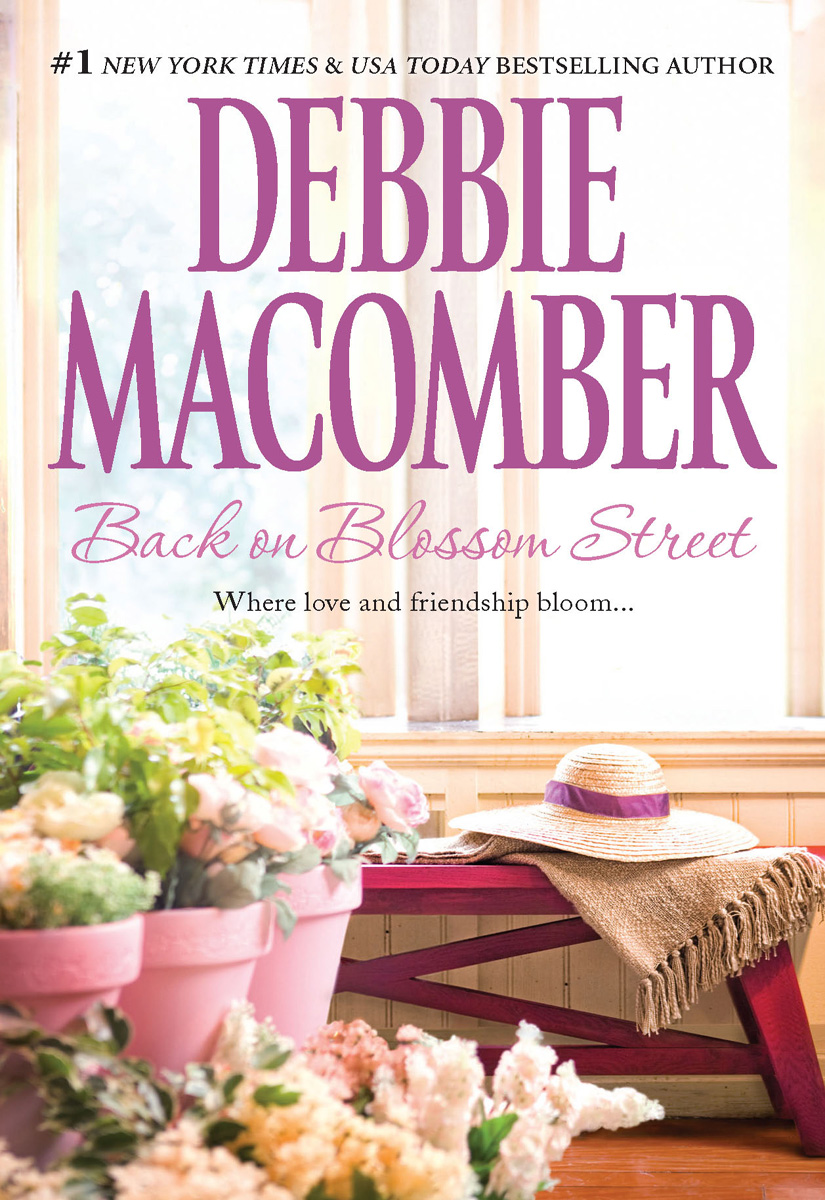 “Debbie Macomber tells women’s stories in a way no one else does.”

“Macomber is an adept storyteller…many will be entertained by this well-paced story about four women finding happiness and fulfillment through their growing friendship.”

—
Publishers Weekly
on
The Shop on Blossom Street

“Macomber is a master storyteller; any one of these characters could have been a stereotype in less talented hands. Instead, these women and their stories are completely absorbing.”

—
RT Book Reviews
on
The Shop on Blossom Street

“Both knitters and non-knitters will find much joy here.”

—
BookReporter.com
on
The Shop on Blossom Street

“[T]he author’s trademark warm treatment of the lives of women will satisfy her readers…. [T]his should be another Macomber bestseller.”

—
Publishers Weekly
on
A Good Yarn

—
Booklist
on
A Good Yarn

—
RT Book Reviews
on
Back on Blossom Street

“These involving stories along with Macomber’s familiar characters continue the Blossom Street themes of friendship and personal growth that readers find so moving.”

—
Booklist
on
Back on Blossom Street

“Debbie Macomber is a skilled storyteller.”

When I wrote
The Shop on Blossom Street,
I didn’t intend it to be a series. However, reader response was so positive that I decided to write
A Good Yarn.
I’ve discovered through messages left on my Web site and from your letters that you love Blossom Street as much as I do. So here’s our third visit,
Back on Blossom Street.

Knitting is still a large part of my life—and even more so since the publication of these books. My yarn room (yes, room) is full. But what I’ve enjoyed most are the wonderful knitting friends I’ve made along the way. This book is dedicated to one, Joan McKeon (and her equally wonderful husband, Bob). Joan knits sweaters for the charity Knit for Kids and was Guideposts’ 2006 Knitter of the Year.

I’ve included patterns in the previous Blossom Street books (for whatever Lydia’s class is knitting in the story) and
Back on Blossom Street
is no exception. I’m thrilled to share two patterns for prayer shawls with you, compliments of Leisure Arts and Myrna Stahman. I’m grateful to both for their generosity. I remain involved with Warm Up America! and am honored to be a board member. The craft publisher Leisure Arts has created some additional Blossom Street pattern books. As before, my share of the proceeds will be contributed to charity. Also, in association with Leisure Arts, part of my Web site, www.DebbieMacomber.com, is now devoted to my knitting friends and will offer a brand-new pattern every month. You’ll be able to download the pattern free of cost. Is that great or what?

Visit my Web site and check out Blossom Street for yourself. There’s always something happening in the neighborhood! Lydia’s just turned over the OPEN sign at A Good Yarn, so come in, meet old friends and make new ones, catch up on everything that’s going on. Enjoy your visit!

DEBBIE MACOMBER
Back on Blossom Street

Bind off all sts in knit.

Cast on one st.

Repeat Row 7 until piece measures approximately 32" (81.5 cm) from cast-on edge, ending with an even number of stitches.

Next 4 Rows: Increase, knit across.

Many knitters are under the impression that knitting lace is difficult. It’s not—knitting lace is simply using knitting needles and yarn to connect a series of holes in a pleasing fashion. The holes are so easy to make. Just put the yarn over your right needle—voilà, you have made a hole. Often the hole made with the yarnover is paired with a decrease. The most common decrease is that of simply knitting two stitches together. When knitting two stitches together, the stitch you first place your needle into lies on top of the second stitch. For most knitters, when two stitches are knit together the stitches end up leaning to the right.

A great way to practice knitting the lace stitch pattern is by knitting a triangular dishcloth. Use worsted weight 100% cotton yarn and size 8 knitting needles so you can see exactly what happens with each stitch as your lace pattern develops. Knitting a dishcloth is a great way to practice casting on, the lace stitch pattern, the bottom border and the bind-off. Even if you make a few mistakes in your practice, the cloth will be fine for washing dishes.

Before beginning your shawl, take these instructions, including the chart, to a copy machine and enlarge them so they are easy to read. Be sure to make the chart nice and big.

The first four stitches and the last four stitches of every row form the top border of the shawl. Although it works to just knit the first stitch, I recommend the chain selvedge: (1) With the yarn in front of your working needle (2) slip the first stitch as if to purl, (3) move the yarn to the back of your work by passing it between the tips of your needles and (4) work the next three stitches; always knit the last two stitches of every row. In the written instructions the four border stitches are referred to as B4 at the beginning and the end of every row.

I recommend using stitch markers in three places on your needle: (1) immediately after the first four border stitches; (2) immediately before the center column of stitches; and (3) immediately before the last four border stitches. Attach about a 12-inch thread to each marker; the thread keeps the marker from flying across the room if the marker accidentally jumps off the needle. The symbol ^ is used in the written instructions to show where a stitch marker is placed.

Casting On
—Leaving a tail of yarn approximately 10 inches long, cast on 11 stitches.
4

To assist you in understanding the chart, the following detailed written instructions are given for rows 1a through 16a and 1b-4b. Every odd-numbered row is a pattern row. In every pattern row there is an increase of four stitches.

Row 2a and all even-numbered rows: B4, purl across to the last four stitches, B4.

Continue by following the chart.

Making the Shawl the Size Desired
—Repeat rows 1d–18d as many times as necessary to make the shawl the size desired. For every 18 rows worked, the shawl increases in width by 36 stitches.

Row 2: Work as you have worked all even-numbered rows.

Row 8: Bind off, using a larger needle for your right needle.

Wash and dress your shawl. A shawl is a knitted hug. Enjoy giving your completed lace prayer shawl to someone who is in need of a comforting hug. Knit a second shawl for yourself or for another friend.

Follow the instructions for the Stockinette Stitch Lace Prayer Shawl, with the following modifications. When working in garter stitch, work the setup row by knitting all stitches. B4 at the beginning of every row is slip the first stitch as if to knit, k3. B4 at the end of every row is k4. All even-numbered rows are worked as Sl1, knit across.