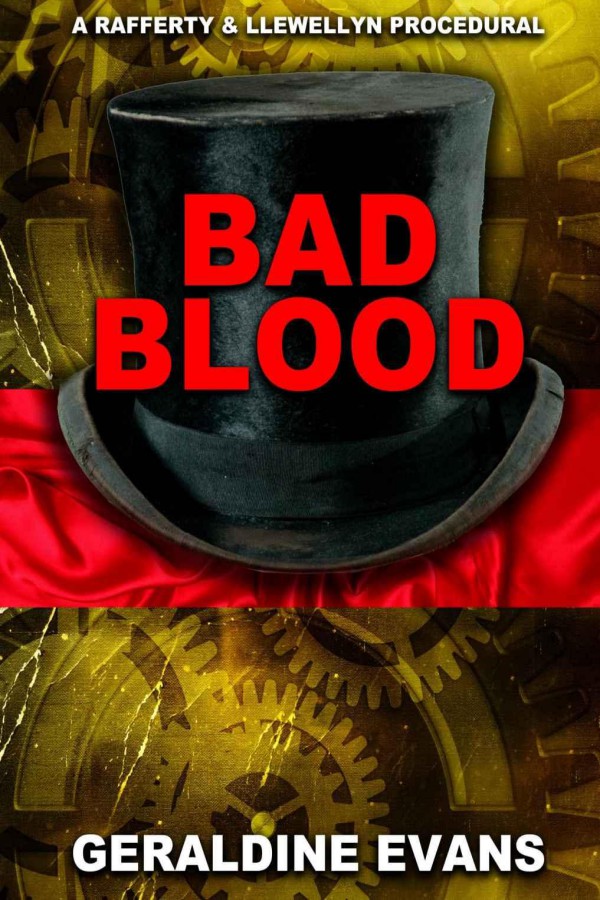 Investigating the murder of wealthy widow Clara Mortimer, estranged from her family and living alone in an upmarket sheltered apartment, Rafferty fears his own family estrangement. Because when Abra, his girlfriend, said she might be pregnant, his reaction wasn't exactly New Man... Between the grudges of Clara's estranged family and those of her adoptive 'family' -- the other apartment residents -- Rafferty has suspects and questions in plenty. Why had the sensible Clara Mortimer chosen to open her door to a burglar, for instance? When he considers the awful lies her family tells, how can he not conclude they have something to hide?

Other Books by Geraldine Evans

The Rafferty and Llewellyn Mystery Series

The Casey and Catt Mystery Series

Up in Flames
A Killing Karma

Investigating the murder of wealthy widow Clara Mortimer, estranged from her family and living alone in an upmarket sheltered apartment, Rafferty fears his own family estrangement. Because when Abra, his girlfriend, said she might be pregnant, his reaction wasn't exactly New Man…

Between the grudges of Clara's estranged family and those of her adoptive ‘family’ – the other apartment residents – Rafferty has suspects and questions in plenty. For instance, why had the sensible Clara Mortimer chosen to open her door to a burglar? When he considers the awful lies her family tells, how can he not conclude they have something to hide?

As Rafferty tries to get back into Abra's good books another tragedy ensues. But still he manages to fight his way past all the lies to find the sad truth: a very modern murder.

‘Another excellent spirited mix of detection and family drama with plenty of suspects to muse over. It's another page-turner from Geraldine Evans in my opinion the English crime writing queen herself.’

‘Well, this was a real find. Geraldine Evans knows how to make a character leap off the pages at you.’

Discover other titles by Geraldine Evans at
www.geraldineevans.com

This book is a work of fiction. Names, characters, places, and incidents are products of the author's imagination or are used fictitiously. Any resemblance to actual events, locales, or persons living or dead, is entirely coincidental.

Except for text references by reviewers, the reproduction of this work in any form is forbidden without permission from the publisher.

DI Joseph Rafferty
grasped his great-nephew in a tentative embrace and stared down at the new-born's red face.

From where he sat, next to his sleeping niece, Gemma's, hospital bed, the slant of the early morning sun across the baby's head lit up what looked suspiciously like ginger hair. For all that the auburn-haired Rafferty thought – poor little blighter, at this discovery – he was ridiculously pleased to see that, like him, Gemma's baby had a dimple in his chin. He felt an instant, warm glow of kinship with this new soul; a glow immediately cooled by his sister Maggie's teasing comment.

‘He looks a natural, doesn't he, Ma? Maybe it'll be your and Abra's turn for parenthood next, Joe. Certainly, at your age, you don't want to leave it much longer, or you'll be getting your pension when the kid wants you to stump up for college.’

From the other side of the bed, Rafferty felt the critical gaze of Mrs Newson, the baby's other proud grandmother.

‘He doesn't look a natural to me,’ she remarked, lemon-tart. Her acid advice for Rafferty was, ‘you should support his head. Not let it dangle like an onion over a Frenchman's bike. You'll damage the poor child's neck. Or turn him into a vegetable for real.’

When Rafferty didn't respond quickly enough to Mrs Newson's instructions, she stood up, said, ‘Here, give him to me,’ and practically snatched the baby from his arms.

Rafferty was too startled to voice a protest; not so his mother. But before his Ma had a chance to get the protest past her lips, from the corner of his eye he saw his sister Maggie give Ma a quick dig in her well-padded ribs. It made Kitty Rafferty clamp her lips on the protest.

But while her protest might remain unspoken, it was far from unfelt. Rafferty, at least, had no difficulty in sensing the waves of indignation his Ma was directing across the bed's slightly soiled lemon duvet.

Oh God, he thought, as he caught the amused eye of one of the other three new mothers in the small side ward. He wished himself elsewhere... somewhere…anywhere. Even to learn he was to head up another traumatic murder case would be preferable to this current angst-ridden situation. At least it would give him the excuse he needed to make his escape before the two sides came to blows over the new baby.

Because, although Wayne Newson, the young father of Gemma's new son wanted nothing to do with the child, Wayne's mother was determined that wouldn't mean she was shut out. After all, the baby wasn't only his sister, Maggie's first grandchild, he was Linda Newson's, too.

Rafferty, whose ears, during Gemma's pregnancy, had resounded to the stereophonic blasts of indignation from both his ma and his sister about the backsliding Wayne, was only too aware that because of Wayne, neither of them liked Mrs Newson's insistence on being acknowledged as the child's paternal grandmother. Any more than they'd liked the way Linda Newson – after being apprised via the neighbourhood grapevine of the appearance of an ambulance outside Gemma's home, the herald of another imminent new arrival – had just turned up after the birth to stake her claim. But as it seemed the obliviously sleeping Gemma hadn't voiced any objections, in spite of their natural anger at the way Wayne had treated Gemma, Ma and Maggie were obliged to bite their tongues rather than Mrs Newson.

Exhausted after her ordeal, Gemma was well out of it and mercifully unaware of the simmering emotions surrounding her.

Rafferty wished for a similar blissful oblivion. He glanced surreptitiously at his watch and sighed. Shortly after his arrival at Elmhurst General's maternity ward, Maggie had told him that Gemma would be going home the following day. A pity she hadn't thought of telling me that sooner, he thought.

Of course, this child was the first of the next generation to be born to any of Rafferty's large collection of nephews and nieces so it came as a surprise to learn how quickly newly delivered mothers were discharged from hospital. If he had realised, he'd have waited and visited Gemma and the baby at his sister's house; at least there he'd have been able to avoid both Mrs Newson's acerbic tongue and the tension between the rival camps.

He wished Gemma would wake up so he could offer congratulations. Or commiserations. He wasn't entirely sure which, in the circumstances. But, as Gemma was an unmarried, teenaged, mother faced with responsibility for a new life, Rafferty felt that commiserations would be more appropriate. And at least if she woke up it would mean he would be in with a chance of escaping this simmering little gathering before hostilities commenced.

Behind him, on the worn linoleum, he heard the clump of institutional footwear. He turned and saw the ward sister approaching. She took a swift inventory of the ward's visitors. Rafferty, suspecting she was about to tell them they were contravening some hospital rule restricting visitor numbers, opened his mouth to volunteer himself for ejection when she saved him the trouble.

‘Is there an Inspector Rafferty here?’ she asked.

Eagerly, Rafferty met the sister's eye and said, ‘That's me.’ He hoped no one else but him noticed that his voice rose up, Aussie-style, at the end, as he sniffed the heady aroma of freedom in the air.

‘There's a call for you from a Sergeant Llewellyn. You can take it in my office.’

Saved by the bell, Rafferty thought. Llewellyn would not have contacted him at the hospital unless it was for something urgent.

As he rose, Rafferty kept a tight clamp on his too-expressive features in case eagerness to leave should make its mark. He followed the ward sister out the door of the small side ward, past the fire extinguisher and the notice asking visitors to turn their mobiles off, and walked the few paces to her next-door office before his Ma, Maggie or Mrs Newson had the opportunity to express their disapproval that his work should intrude even here.

‘Sorry to have to ring you at the hospital,’ Llewellyn said as Rafferty picked up the receiver and said hello.

‘Think nothing of it,’ Rafferty said magnanimously. ‘It's the reason I told the station where to find me, after all.’

‘How is your niece?’

Reassured that Gemma and the baby were both doing well, Llewellyn went on. ‘We may have a new murder case. An elderly lady's been found in her home with fatal head injuries. The injuries look to me unlikely to have been caused by a fall. My first instinct is that she was hit over the head after she disturbed an intruder. I'm still at the scene. It's that sheltered housing block on Priory Way, opposite Priory Park. Parkview Apartments.’

Rafferty knew the place. As Llewellyn had said, the apartments were opposite the park the local council had created from the grounds of the ruined priory – a building that was a bricks and mortar victim of an earlier, Tudor, age of violence and vandalism. Parkview Apartments were in a quiet part of Elmhurst. Near enough to the centre of town to walk to the shops; they were ideally situated for the elderly.

As he listened to Llewellyn's voice with its urgent summons, he reflected on the incongruity of receiving a call to a scene of violent death while at the bedside of a newly delivered mother. But in the midst of life, mortal man must still outface death, he reminded himself. Perhaps his ma, sister and Mrs Newson would accept this argument without complaint, he mused, even as he doubted the possibility.

He asked Llewellyn, ‘You've set the wheels in motion?’

Llewellyn confirmed it. ‘Smales and PC Green are here with me at the apartments. The Scene of Crime team and Dr Dally are on their way. How soon will you be able to get here?’

‘I'll come now.’ He added, attempting to inject a note of virtuous self-sacrifice in to his voice, though he doubted it fooled Llewellyn who had heard all about the current Rafferty family situation. ‘Of course I'll come now.’