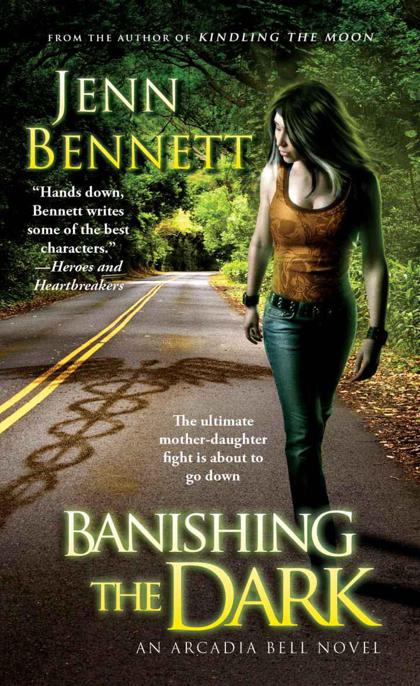 “From the opening line to the terrifying cliffhanger ending, this is an adventure readers won’t soon forget!”

“This series has managed to get infinitely better with each new story. . . . A jaw-dropper of an ending.”

“Bennett’s spectacular urban fantasy series has earned her a spot on my favorites shelf. . . . Her writing is crisp, imaginative, capped with witty dialogue.”

“This is one of those books that you want to devour in a day but wish you hadn’t when you turn the last page.”

—
Romancing the Dark Side

Nominated for the
RT Book Reviews

“Bennett quickly establishes that her terrific debut was no fluke, delivering another riveting tale. . . . A series for your keeper shelf!”

“I can’t find enough superlatives for the enjoyment each of Bennett’s books has brought. She has won a lifetime fan in me.”

“The talent pool for the urban fantasy genre just expanded with Bennett’s arrival. This is an impressive debut. . . . Plenty of emotional punch, not to mention some kick-butt action. . . . Bennett appears to have a bright future ahead!”

“Without a doubt the most impressive urban fantasy debut I’ve read this year. . . . The writing is excellent, the characters are charming, and the romance is truly believable. . . . Flawlessly original!”

“The perfect blend of action, intrigue, tension, and the supernatural.”

“I was smitten with this book right from the beginning . . . a must-read for all lovers of urban fantasy.”

“Bennett creates a world that is interesting and all its own. . . . Her characters are crafted with precision.”

“Jenn Bennett has written a great off-beat debut novel with a likeable heroine and a fun, original storyline. . . . I thoroughly enjoyed it!”

“
Kindling the Moon
engaged me from page one. I loved it! I immediately adored the heroine, Arcadia Bell. This book is packed from cover to cover with unpredictable twists, heart-pounding action, and heated sexual tension. . . . Jenn Bennett has definitely made my ‘To Buy’ list.”

Thank you for downloading this Pocket Books eBook.

Jupe crouched in the shadows, watching a pair of nurses stroll down the hall. Cartoon horses on the female nurse’s scrub pants stretched over a pretty good ass. Good enough that he considered following her. After all, he’d analyzed forty-three nurses over the past month. Only two of them even remotely qualified as hot, and one of those was a guy.

But right now, he had more important things to do than accept the depressing likelihood that hot-nurse fantasies were a sham. So when the pair sauntered around the corner out of sight, he pushed to his feet and scrambled across the hall.

A taped-up sheet of plastic, two trash cans, and a warning sign might keep stupid people out of the construction area, but anyone with half a brain could see how easy it was to squeeze through. The display downstairs in the lobby said the new hospital wing cost three hundred million dollars. Maybe they should have spent some of that on a few pieces of
plywood if they were serious about keeping people out until it was finished.

He’d been sneaking out to the sixth-floor glass walkway stretched between the old and new hospital wings off and on for a couple of weeks. On one side lay a silent parking lot. On the other, a couple of people smoked cigarettes at tables in an outdoor pavilion. He was too far up for them to notice, but he wanted to make sure no one heard him through the plastic. So he sidled around a pallet of boxes and strode down the carpeted walkway to the far end.

At least they’d had enough sense to lock the doors to the new wing. He pressed his forehead against the glass and squinted inside. All clear.

Chain clinked against his thigh as he dug a black wallet out of the back pocket of his jeans. Thumbing past his GTO Club membership and an ATM card for his savings account, he found the laminated piece of paper. It took him a couple of seconds to roll his tongue around the inside of his mouth, working up saliva, but when he was ready, he held out the card and spit on the magick sigil in the middle.

The air shimmered, and a ball of light appeared. He stepped back to give the guardian room to land and watched as two enormous black wings flapped into view. The boy’s body soon followed. No shirt. Weird-ass gray skin. Mass of black spiky hair that looked like a Brillo pad that had been chewed up by a
garbage disposal. (He should know; it had taken him an entire month of lawn mowing to work off the debt of repairing the disposal when he’d not so accidentally dropped one down the sink.)

The Æthryic guardian shook the walkway when he landed. His wings made a snapping sound as they folded into place behind his back. He looked pissed. Sounded it, too. “I told you not to summon me unless it was vital.”

“And I told
you
, Cady said I could summon you whenever I damn well pleased.”

“I feel quite certain she said no such thing. But now that I’m here, get on with it, and tell me why you called. I am busy doing important work.”

“
Pfft.
Like what?” Jupe flicked a look toward the creature’s bare chest. “Getting some sort of nuclear tan?”

God, what a douche. Worst servant ever. He didn’t understand why Cady put up with him. Then again, if the creature hadn’t come to Jupe a month ago to tell them what had happened with Mr. Dare in Tambuku, Cady might be dead. Grumbling to himself, Jupe bent to wipe Priya’s sigil card on the industrial carpet. It only moved the spit around on the laminate. He gave up and wiped it on the leg of his jeans. “Cady’s awake.”

Anger drained from the creature’s face. “When?”

“Why didn’t you summon me immediately? Is she well?”

“She’s in and out of consciousness. They said it was normal. Might take a couple of days for her to shake it off. But . . .”

“But what?” Over his bare shoulders, the tops of Priya’s wings shifted anxiously.

“Doctor said best-case, they’d still have to keep her in the hospital for a week. Longer if she can’t walk.”

“She will walk. She is very strong. What of her mother? Has Enola been communicating with her in her dreams?”

Jupe shook his head. “No idea. She hasn’t mentioned it, but she’s having trouble remembering things. She’s pretty doped up, so I’m not sure if she really knows who I am. And we’re not supposed to talk about anything upsetting or stressful in front of her. Dad’s been trying to get in touch with Dr. Mick—that’s the Earthbound doctor who healed—”

“Yes, yes,” Priya said irritably. “You have spoken of this healer many times.”

Whatever. “Anyway, Dr. Mick is the one who can release Cady. Dad wants to get her home ASAP.”

“Your father needs to get her into a protected place immediately.”

“That’s what I just said. ASAP—it means as soon as possible.” God, this guy was as dense as a brick wall. Were all Hermeneus spirits like this or just him?

“Then your healer should release her into Lon’s care,” Priya said. “A-S-A-P.”

“Aren’t you listening to me? Dr. Mick’s mom died. He’s at her funeral. In Australia.”

“Where is this? Can you go there?”

“Australia? Are you kidding? It’s a billion miles away. My dad’s flown there before for work, and it takes an entire day on a plane. You do know what an airplane is, don’t you?”

The creature snapped his wings open like one of those dinosaurs that spreads its frill to make it seem bigger than it really is. As far as intimidations went, it was a good one. And it was at times like this that Jupe wished like hell he had his father’s ability to transmutate. A couple of bad-ass demon horns would really come in handy.

Priya pointed a long finger in Jupe’s direction. “Listen to me, Kerub, and listen well. Arcadia’s mother is scouring the Æthyr for a demon capable of sending her back to this plane. If you care anything at all for Arcadia—”

“Then tell your father to get her to a warded place immediately. I do not know how long she will be safe. A few days. A week. Possibly a fortnight.”