Bewitching The Alpha (Hex My Heart, #3) 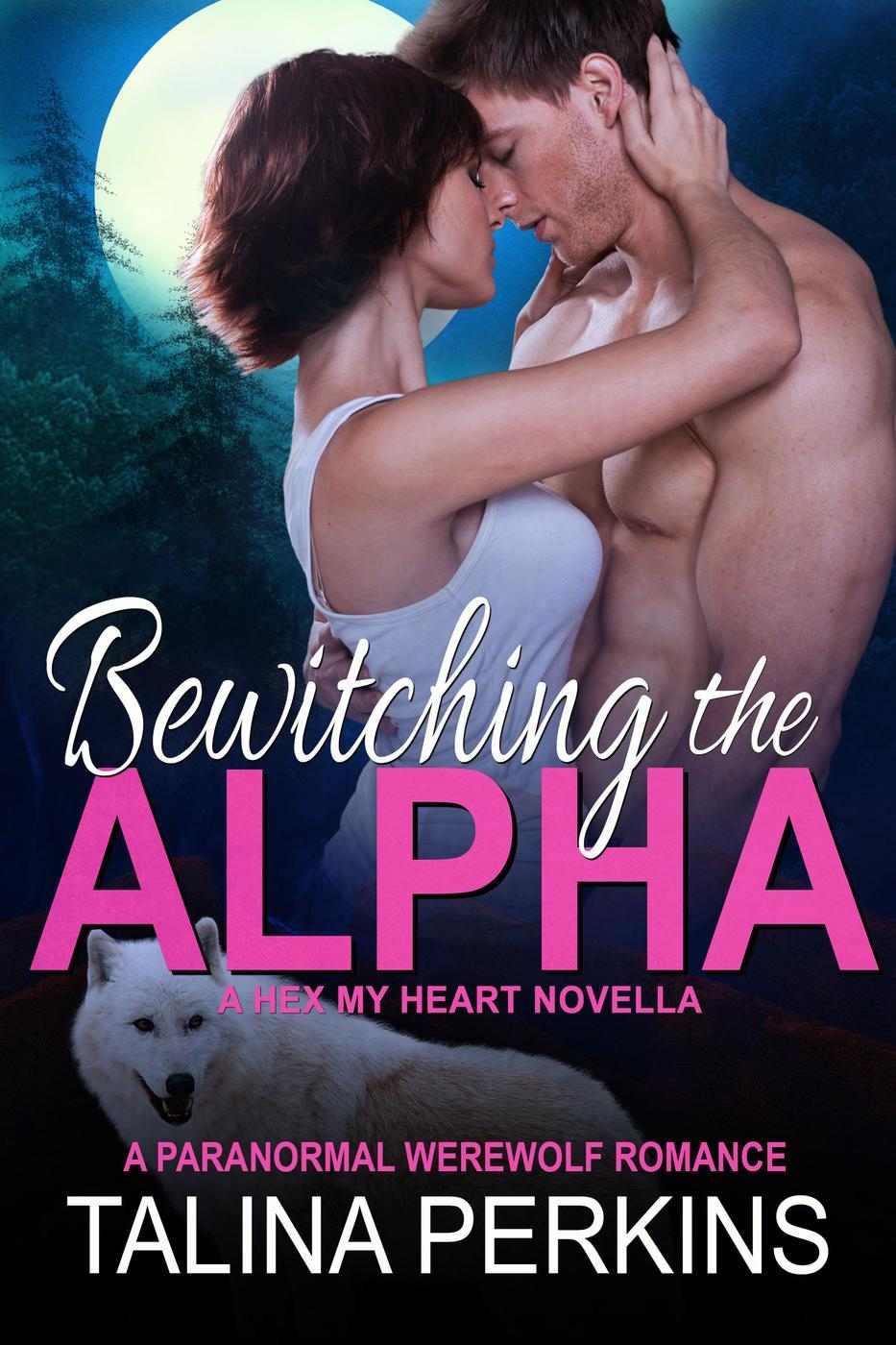 T
his is a work of fiction. Names, characters, places, and incidents are products of the author’s imagination or are used fictitiously, and are not to be construed as real. Any resemblance to actual events, locales, organizations, or persons, living or dead, is entirely coincidental.

All rights reserved. No part of this work may be used or reproduced in any manner whatsoever without written permission, except in case of brief quotations embodied in critical articles and reviews. This book is a work of fiction. Names, characters, places and incidents are either products of the author’s imagination or used fictitiously. Any resemblance to actual events, locales, or persons, living or dead, is entirely coincidental. No part of this publication can be reproduced or transmitted in any form or by any means, electronic or mechanical, without the permission in writing from the Author.

T
he soul knows where it belongs, even if it takes us a while to catch on. To those that fight for the heart, and from the heart... may your soul lead you to your happiness.

A special thank you to my four kiddos—Peter, Anthony, Talina and Codeliva—your laughs and smiles are a constant inspiration! To my husband who beta reads all my work, thanks for keeping me on my toes, babe! And a big shout out to my friend and fellow author, JoAnne Kenrick... thank you!

Flames licked up his spine and burned through his veins until all he could think about was Ember. Having her wrapped around him, balls deep and his mouth claiming hers.

The burn had been on a constant high heat since she’d strutted back into town.

Why the hell did she have to come back here?  She could be in a million other small towns with her magick and heart-crushing ways. Why come back to Sweet Briar?

Tension seeped bone-deep and constricted all his muscles until he could barely move or think without gnashing his teeth. A shuffling sound came from behind him, but he brushed it away as small animals scurrying through the dead underbrush.

They sensed the predator in him and they were right to be afraid. It had been too long since his last hunt. Weeks since he’d felt the freedom of the woods with no one for company except the moon. He tightened his fists by his sides.

Tonight wasn’t about the hunt so much as it was about the escape. His wolf would have to wait for the rush and thrill of a good hunt for a bit longer.

Howls broke through the trees and brought him around to face the thick woods at his back. That’s when he caught the female’s scent. Square in the face like a two-by-four or maybe a semi-truck doing eighty.

A wall of fiery magick rammed into him, knocking the air from his lungs. He clutched a hand to his chest and doubled over, but quickly righted himself.
Talk about taking a hit...

He raised his head and inhaled sharply. Ember.

He’d recognize her signature anytime, anywhere. All witches left a small portion of their essence in their handiwork and this magick smelled of one particular witch. His witch. What was she up to?

Remnants of love-drenched energy wafted along the cold currents to sting his wolf’s heightened senses. With his bare feet braced on the cliff rocks, he shook his head, but it didn’t dislodge the potent aroma. She wasn’t nearby or even in the same woods with him. No, he could smell another witch’s power mingled with Ember’s.

But he could be mistaken. Every time he caught the scent of lavender or vanilla his mind clicked over to instinct and his wolf took control—all he could think about was Ember. The one witch he’d crawl over coals for and the one witch he’d vowed to never touch again.

He clenched his teeth against the surge of adrenaline that shot through him and with it came a drudge of old memories. She’d promised nothing would keep them apart the night he’d claimed her as his mate, then she’d vanished less than twenty-four hours later. That was sixteen months ago without a word. Nothing. He’d scoured the whole fucking town looking for her only to have her family shun him at every turn. No one knew anything, or everyone that knew didn’t want him to know.

He shoved the past aside, buried the present beneath a wall of truth and let his gaze fall to the jagged rocks at his feet. She might be back in town, but she didn’t want him. Probably never did.

Earlier tonight he’d stopped in for a couple of shots at the Matchstick, the only dive bar that served anything worth drinking. Ember’s sister concocted a mean supernatural version of moonshine, and all walks of the otherworldly kind loved to get their buzz on with her Moon Lust brew.

He could lie all he wanted, but the last thing he went there for was the liquor. On most nights like this, his pack pounded back shots and tossed around a load of bullshit for hours, but he liked the off chance of catching a glimpse of Ember when she stopped in to see her sister.

Tonight was his lucky night. When she’d waltzed through the double doors something shifted the second her ice-blue eyes connected with his over the rim of his tumbler. Their normal ability to ignore each other vanished with that one look.

A blink and the connection was severed, but the coals he’d hoped had died down burst back to life and even now the veins crisscrossing him burned with wildfire.

He hadn’t meant to speak to her. Or touch her, but when she passed by him, a whisper away, his hand shot out and his fingers fanned through her hair in passing. She probably hadn’t felt it, but he did. With the slightest of touches, the soul-deep connection they shared struck him square in the chest like a well-aimed sledgehammer.

And he damn sure hadn’t meant to let her torment his thoughts again, but here he was, standing in the middle of a coming snowstorm, hard as granite and beyond lusting for her. He shifted himself a little to the left from the bite of his zipper.

Searching for anything to help him calm the beast, he dragged his attention to the thick silver beams of moonlight pouring over the snowed-in town laid out before him. Gauzy white light drowned the roads and left only small spirals of smoke that disappeared into the blackened sky as the only proof of life. Tucked between two rising mountains filled with cone-shaped pines, Sweet Briar Hollow slept.

When his wolf bulked and forced its way to the surface at just the slightest touch of her, he hightailed it out of the Matchstick bar and landed in the only place where he could command control over his wolf.

If he had stayed longer, watched as more drunk fucking pricks hit on her, he would have dragged her back to his cabin, tied her to his bed and fucked her until he either worked her out of his system for good, or until nothing else existed between them. Not their past, the heartache he thought he’d fucking cut out of his chest and definitely no fucking lies. The only thing that would be left would be their bond as mates. He bit out a harsh laugh. Like it meant anything to her. In his world, it was ‘till death do us part. For her, who knew? He was done guessing in the matters of all things Ember.

Regret welled inside him, but it was too late for that shit.

Julian backtracked over the jagged rocks and made his way deeper into the dense forest. Shrouded in the shadows, he flicked open the satchel on his Harley and tossed in his discarded boots before stripping down to nothing.

Maybe a run in the cold would do him good. Clear his head if nothing else. Winter drove all the humans inside and kept the bastards there.

His pack bordered on several hundred acres of land along the ridge of the mountain. Days could pass and not a soul would bother him. He could get lost and he’d welcome the solitude.

Snow covered his feet, and small flurries drifted along the current. He bowed his back and stretched his arms out. Another wave of supercharged magick collided with him.

He angled his head and listened. Heavy footfalls padded by several feet of snow echoed in the distance and at the edge of his hearing, a woman’s voice joined the mix. Faint, even to his ears, but no denying the soft feminine chords.

Not the husky, sensual voice of his woman, but someone who struggled. And who the hell was he kidding. She wasn’t his anymore, but the crux of that problem was still buried beneath a mound of bullshit chin deep. Every time they crossed paths and she raked her light sapphire gaze over him, every emotion he managed to suppress resurfaced with a vengeance. And he didn’t know how much more he could take.

Half of him wanted to follow the sounds and check out the commotion. The half that called to his position as second-in-command to the Sweet Briar Alpha. And if he were half the man he used to be, he would. He’d save the knight-in-shining-armor for some other dumbass that didn’t know any better. Last time he held the position, the fucking world had split open and left him for dead.

Need hummed along his spine. Need to reclaim his mate. Need to mark the woman he loved.

Fuck it all to hell. He needed to run. Everyone could fend for themselves just as he did. He had his duty and he made damn sure the pack law was followed. Everything else didn’t matter. Staying the fuck out of witches’ business was at the top of that list.

Knots bunched in his gut as the moon dipped behind the clouds. His eyes dimmed, then the world faded to gray with sharp accents. Smells from the surrounding forest intensified. Dead leaves buried beneath layers of ice and snow to the deer tucked away from the coming storm pinged on his radar.

Unable to stop the shift, he dropped to his hind legs and let the moon call to his inner beast. Muscle stretched, bones snapped and popped. Human hands morphed into paws, and blunt teeth turned lethal.

Lusting for the feel of the cool beams against his fur and the smallest of reprieves from the haunting shadows of her, he ran. Pine trees flew by, cold air filled his chest, replacing the sweet vanilla scent that plagued relentlessly.