Read Beyond the Moons Online

Tags: #The Cloakmaster Cycle - One 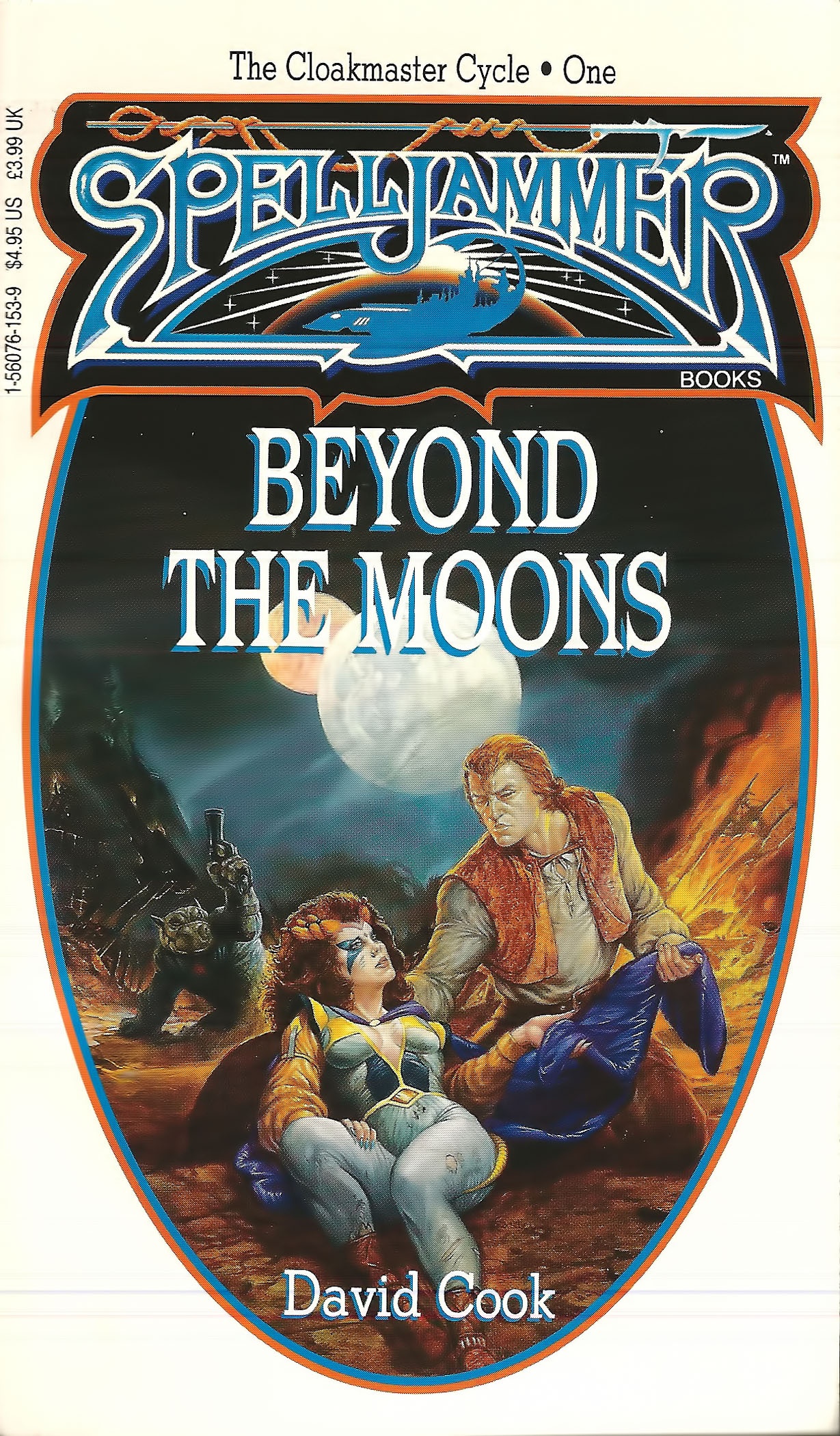 This book is protected under the copyright laws of the United States of America. Any reproduction or other unauthorized use of the material or artwork contained herein is prohibited without the express written permission of TSR, Inc.

Distributed to the book and hobby trade in the United Kingdom by TSR Ltd.

Distributed to the toy and hobby trade by regional distributors.

Distributed to the book trade in the United Kingdom by Random Century Group. 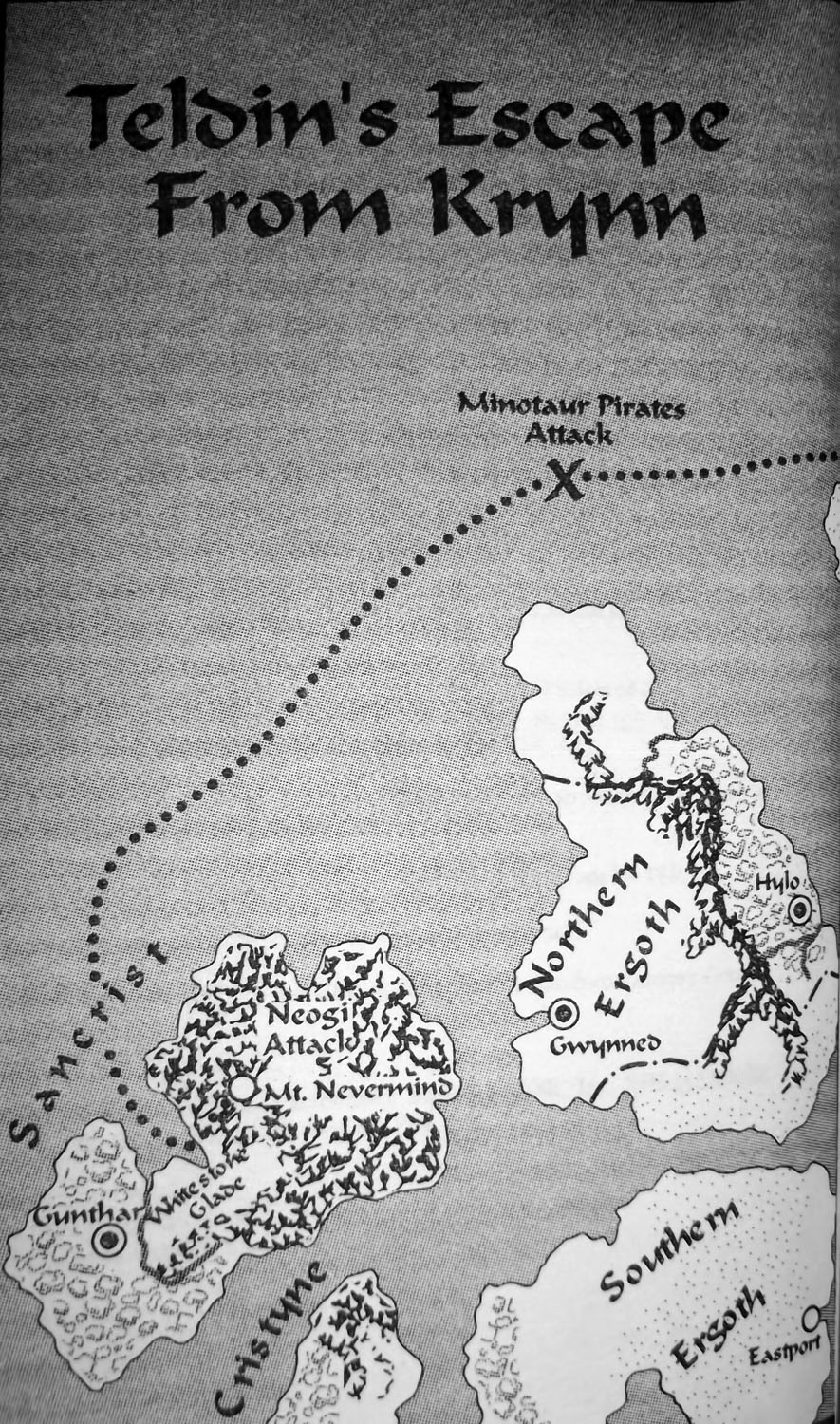 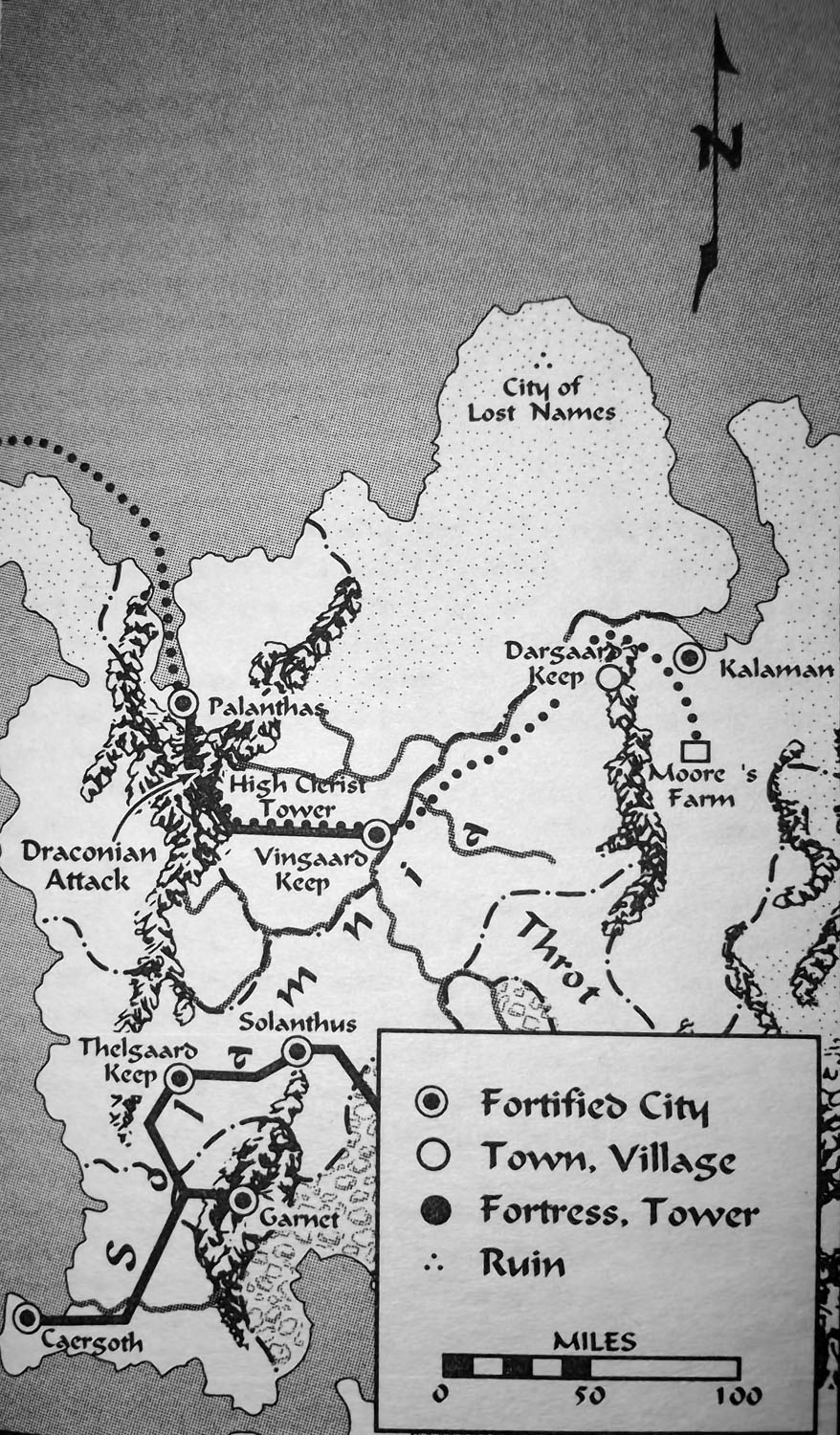 “Aye, Captain, jettison away!” The mate’s words were almost swallowed by a shrieking crash. The flying ship’s deck shuddered as a section of the sterncastle shattered in a rain of wood and iron splinters. An agonized howl echoed from below, somewhere along the catapult ball’s destructive path. The captain and mate, both staggered by the hit, grabbed the rail.

“Damn my eyes! Hard to port, helmsman,” bawled the captain. “Get us out of their fire, now! Mister Yandars, see to the damage below!”

“Aye, sir,” the helmsman and the mate responded simultaneously. The captain hardly took notice, certain that her orders were being carried out. Already she was striding to the sterncastle, her long, fine cloak billowing behind her. She found the ballista crew frantically struggling with its weapon. Two men were just giving the last turns to the winch that bent back the powerful bow, while a third laid a massive bolt into place.

“Take your aim carefully, lads,” the captain intoned, trying to soothe her artillerists’ shaken nerves. “We’ll be coming about in a moment. They’ll steer to port to avoid our jettison. When they do, take aim for an eye. If you can hit her square, you should cause those villains some grief.” She laid a soothing hand on the loader and watched over the firer’s shoulder as the man adjusted the aiming screws, laying in the shot.

Finally satisfied, the artillerist jerked the weapon’s lanyard, pulling the trigger. The ballista’s great bow released its burden with an off-key twang that hung in the air as the bolt shot away toward the enemy. At first, the shaft arced straight and true, only to skitter off the enemy ship’s rounded hull just yards from the bulging, domed porthole.

“Faster, boys! Load and fire again!” The captain thumped the loader on the back to get him moving. “Keep our course steady,” she shouted to the helmsman, “till we fire again, then bring —”

The whistling whine of an incoming projectile interrupted the captain’s words. Before anyone could react, another catapult stone struck, ripping through the ship just aft of where the captain stood. The deck buckled under her feet, shearing the ballista from its mountings. The gigantic crossbow heaved over, one end of the metal bow savagely impaling the loader, pinning the writhing man to the deck. Another of the artillerists was pitched against the rail. The decorative spindles shattered under the man’s weight and he plunged over the side into the darkness with a pleading scream. The captain was flung backward against a bulkhead, wood splinters bloodying her arm and face. She slid to the deck, dazed by the blow.

Before the officer could recover, she was gently scooped up in the massive arms of her cabin boy. Head still groggy, the captain felt herself being carried toward the forecastle. “Private Gomja is here for you, Captain,” the cabin boy offered in a deep, rolling voice.

“Captain, are you injured?” the first mate frantically inquired when he met the pair while coming up from below.

The captain waved off the mate’s question while ignoring her cabin boy’s ministrations. “Report on the damage below.” Instinctively, she knew the information would be bad. The last two shots from the enemy had been too well aimed for the
Penumbra
to escape lightly.

“Captain, Mister Tyreen reports the helm was cracked by that last shot. The wizard’s trying to hold it together, but he says we’ll have to cut our speed if we want to keep it from breaking up.” The first mate looked worriedly toward the stern, where their pursuers followed.

“Blast and damn!” sputtered the captain, pushing herself out of the cabin boy’s arms. “Well, we can’t run anymore. Get below and tell Tyreen I want every drop of speed he can get out of her, and I don’t give a damn about his helm. We’re going to run for the cloud bank and make for land.”

“Mister Yandars, this is our only chance, so just do as you’re ordered! Unless, of course, you’re willing to trust your fate to them.” The captain pointed emphatically toward the dark shapes astern, three hulking ships slowly closing on the small, crippled merchantman. “Tyreen’s got to hold it together till then. If my rudders are right, that’ll be Krynn below us. There’s a fair-sized continent down there – Ansalon it’s called on the charts. We’ll make to land on it. Once we’re down, Tyreen can make his repairs.”

Mister Yandars fearfully glanced back at their pursuers, his face pale. “Aye, Captain,” he said weakly, “I’ll see your orders are carried out.”

“Very good, mister. Helmsman, take us into the clouds,” commanded the bloodied captain. The rigging creaked slightly as the
Penumbra
nosed downward.

Teldin Moore stopped in midswing, and the hoe he held almost flew from his grasp. Liam’s excited shout, practically in Teldin’s ear, was as startling as the word itself. “Liam, by the returned gods,” Teldin snapped as he dug the hoe into the ground, “I’m right here!” The tall farmer swung around to give an icy, blue-eyed glare at his shorter, older neighbor, but a dribble of sweat, brought out by the setting sun, dripped down his forehead. Teldin blinked as it dropped into his eyelashes, ruining the reproachful glare he hoped to achieve.