Big Guns Out of Uniform 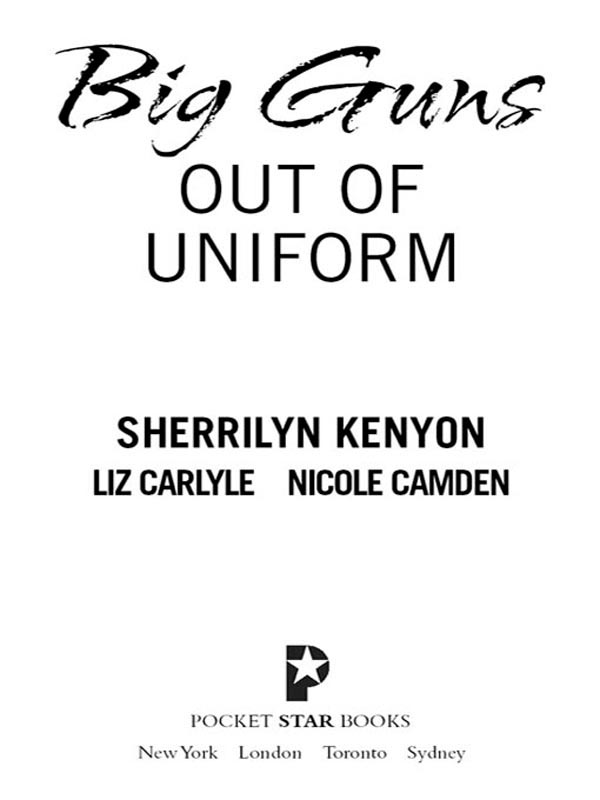 Big praise for
Big Guns Out of Uniform

“Don't miss this anthology! The stories are wonderfully romantic and refreshingly playful.”

“Sherrilyn Kenyon starts her new BAD series off with a bang (literally) with this fun frolic in the sunâ¦. âBAD to the Bone' is full of the wacky humor and larger-than-life characters that have become her trademark.”

“Fans of Sherrilyn Kenyon won't be disappointed in âBAD to the Bone.' Nothing short of steamy and electrifying, Marianne and Kyle are a match made in heaven.”

“Sensual and suspensefulâ¦lively and absorbing.”

“â¦take a well-deserved bow to the standing ovation, Ms. Camdenâyou've earned it.”

“âThe Nekkid Truth' is Ms. Camden's first book and I have to tell you it is marvelous. The sex, heck the entire story, has a wonderfully gritty, almost raw and uncut, feel to it. I'm definitely placing Nicole Camden on my list of new authors to keep an eye on and look forward to plenty of books from her.” 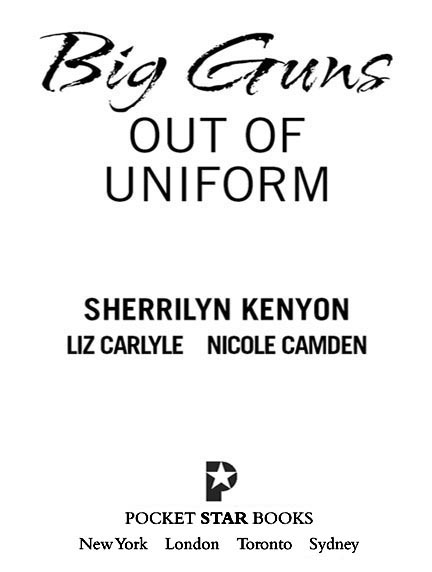 This book is a work of fiction. Names, characters, places and incidents are products of the authors' imaginations or are used fictitiously. Any resemblance to actual events or locales or persons, living or dead, is entirely coincidental.

“BAD to the Bone” copyright Â© 2003 by Sherrilyn Kenyon

Originally published in trade paperback in 2003 by Pocket Books

BAD to the Bone
Sherrilyn Kenyon

BAD
to the
Bone

who has given me my overactive imagination,

who doesn't mind it,

and my friends and family,

God bless all of you!

M
arianne Webernec was completely average at age thirty, but what she desperately wanted to be was extraordinary.

For once in her life she wanted to be the heroine in one of the Rachel Fire novels that she gobbled up as soon as they were published. To be tall, thin, and devastatingly beautiful. The kind of woman that men everywhere lusted for. The kind of woman who walked into a room and men fought each other just for her smile.

But what she was, even after her makeover, was a mere five-feet-four-inch size-ten woman with medium brown hair that was pinned back from her round face to fall just below her shoulders. She had eyes that were flat brown, not amber, not flecked with anything unusual or worth noticing. Her breasts were too small, her hips were too wide, and her feet were pinched by the narrow tips of her high-heeled shoes.

“I think you're stunning.”

Only if she had a stun gun in her hand.

Marianne looked over her shoulder to see Aislinn Zimmerman staring at her. Aislinn was what she wanted to be. Rich, model thin, with long, curly red hair, perfectly manicured nails, and big bright green eyes that seemed to glow. Aislinn was every bit as beautiful as her namesake from Aislinn's mother's favorite romance novel,
The Wolf and the Dove.

They were ever an unnecessary reminder that at the end of the day, Marianne Webernec would never be one of them.

She would always be average. White noise in the background of a world that went on oblivious to her presence no matter how much she longed for it to be otherwise.

“Thanks,” Marianne said to her lamely, knowing the truth in her heart. But that was okay.

A covert CIA agent pursued by the evil archvillain who would turn out to be a good guy trying to uncover the man who had killed his brother.

Okay, the plot was a bit clichÃ©d, even a little trite. But Marianne loved Rachel Fire's book
Danger in the Night.
She had read it so many times that her copy at home was in pieces barely held together by tape.

For the last four years that book and its hero, Brad Ramsey, had lived in her heart and in her mind. He was the man she dreamed of seducing every night when she closed her eyes.

She had licked every inch of his divinely masculine body from head to foot, and had made him beg her for mercy. They had made love everywhere from Caribbean beaches to the snowdrifts of Moscow.

In her mind she had ridden him hard and furiously, and made him hers.

Oh, to really be the book's heroine, Ren Winterbourne. The sultry, sophisticated agent, woman of the world, who knew every way possible to make a man beg for her touch. Ren never doubted herself. She always knew exactly what she wanted and how to get it.

Marianne was still searching for her place in the world. And when it came to men, she would never understand them. They were completely alien beasties.

She sighed wistfully. Her entire life was a study in what could have been. If only she'd been smarter, taller, prettierâ¦

Her mother had once told her that life was about acceptance. That she needed to be content with what was dealt her and be grateful it wasn't worse.

Starting this instant, Marianne was going to take her mother's advice.

She was going to walk out that door andâ¦

“Do I have to wear the heels?” she asked Aislinn, holding her foot out toward the beautiful redhead as she flexed her ankle.

Some things were best done with level feet. Especially when the last thing Marianne wanted was to be embarrassed. “I'm really not a high-heel kind of person. I'm more the I'll-stumble-and-twist-my-ankle kind of woman.”

“Got anything flat and black?”

Aislinn flipped open her stylish silver cell phone and pressed a button. “Hi, Gwen, Ms. Webernec would like a selection of flat black shoes to go with her rust-colored miniskirt dress. She's a size eight mediumâ¦. Thanks.” Aislinn closed the phone. “Give her ten minutes and she'll bring us a new boxload of them.”

It was good to be queen.

At least for the day, or in this case, a whole month. Marianne smiled at the thought.

One full month of being catered to and pampered. Having her every want met without complaint.

Oh, yeah, forget Julia Roberts in
Pretty Woman.
This reality was
so
much better.

After all, Marianne Webernec, average Jane high school teacher, was about to head off to Sex Camp.

Ivy and Bean: What's the Big Idea? by Sophie Blackall
Torn by Avery Hastings
[Hurog 01] - Dragon Bones by Patricia Briggs
Ruffskin by Megan Derr
Well of the Damned by K.C. May
A Mad, Wicked Folly by Sharon Biggs Waller
The Prince by Vito Bruschini
The Water Room by Christopher Fowler
Dirty Shots by Marissa Farrar
The Visitor by Brent Ayscough
Our partner