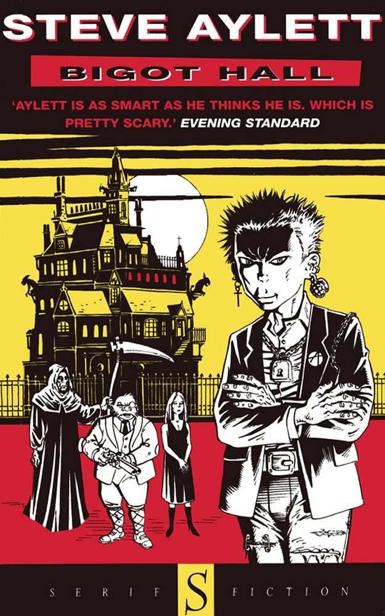 'Steve Aylett is without doubt one of the most ambitious and talented writers to emerge in
England
in recent years. While his work echoes the best of William Burroughs, it has the mark of real originality. It's hip, cool and eloquent.'

'The most original and most consciousness-altering living writer in the English language, not to mention one of the funniest.'

'Aylett is one of the great eccentrics of British genre fiction.'

'Shrewd and savage wit that scales astonishing heights ... A cult classic in the making.'

'Aylett's distorting mirrors are crueller than most ... It's like the Addams family written by Peake on ecstacy.'

Steve Aylett has asserted his right under the Copyright, Designs and Patents Act 1988 to be identified as the author of this work.

Steve Aylett is the author of
Novahead
,
Slaughtermatic, The Crime Studio, Bigot Hall, The Inflatable Volunteer, Toxicology, Atom, Shamanspace, The Complete Accomplice
, the
Tao Te Jinx, Fain the Sorcerer, And Your Point Is?, Smithereens, Rebel at the End of Time
and
LINT
. He also created the comics
The Caterer
,
Get That Thing Away From Me
and
Johnny Viable
, and LINT THE MOVIE.
www.steveaylett.com

Heinrich Ibsen’s dying words, upon hearing his wife remark that he was looking better

ENVY OF THE WORLD

THE PICTURE OF UNCLE SNAP

ITCHES IN THE SKY

ONCE UPON A TIME

Even in the slaughterhouse of boyhood I was dimly aware that I should have some jolly, wink-eyed uncle or gramp with whom to share private jokes and hatch terrorist outrages against the state. But all I recall is Uncle Snapper, who liked to go shooting in the woods and had a theory about squirrels. ‘They always run round the other side of the tree from where I am,’ he declared one evening, at which I in my innocence said I wasn’t surprised seeing as he went into the woods for the exclusive purpose of killing anything larger than his brain.

At this Uncle Snapper stood in a shuddering, grill-mouthed rage.

‘Dad!’ I shouted down the hallway. ‘Uncle Snap’s changing colour!’

‘Right you are,’ called Father from his study, but did not emerge to look.

‘Offer him water,’ called Father, preoccupied. He was by nature so calm he once sketched an oncoming bullet train before stepping unhurriedly aside. This despite his supposed descendence from an Irish berserker famous for having beaten off the rigid head of a goat. It was Snap who seemed determined to inherit the legend’s ancient umbrage and who wasted no time in breaking a bull’s nose with his left fist. But it was a cause for the odd explosive guffaw that this had been the outer and extreme extent of his effect upon the animal kingdom.

Snapper bellowed suddenly, grabbed my neck and shook me like a bladder on a stick. Apparently the blur of my mouth and eyes resembled the slot and gauge of a parking meter. ‘You’ll help me kill those woodland rascals, laughing boy,’ he snarled, jowls quivering, ‘or so help me I’ll –’

The following day, Uncle Snapper stood in the leaf-blown forest with a sawn-off 20-bore and a pair of strange, inflatable dungarees. I stood by cheerlessly as he outlined the stalking plan in a guarded, barely articulate whisper. ‘An animal,’ he stated, ‘can only be in one place at a time.’

‘One
area
,’ said I, thinking of the very long tail of the Portuguese man-of-war. Those beauties are only knapsacks filled with gas, but by god they can sting a man.

Snapper was furious, pounding me on the chops in time with his heartrate. He explained that if he and I stood on opposite sides of the tree, a trunkbound squirrel would have nowhere to hide. This is the sort of shite I had to listen to when I was a boy.

We set about executing Snapper’s plan - of course the chosen squirrel couldn’t care less and clung flat to my side of the trunk, regarding me with a beady eye. ‘What’s it doing,’ shouted Snapper.

‘Hanging there, Uncle. And staring at me as if awaiting some grand finale.’

‘
I’ll
give it a finale,’ Snapper choked, and told me to scare it into his sights. The most scary thing I could think of was the fact that unstable statesmen are only deemed insane retrospectively. As Eisenhower said, ‘Things are more like they are now than they ever were before’ - if those aren’t the words of a florid psychopath I’m all ears. Anyway I discussed migraine humour and other things which interested me at the time. But the squirrel just looked me in the face with all the self-possessed assurance of an elderly barber. Initially I couldn’t assess how Snapper was reacting due to the interposing tree - then there was an almighty blast and a scatter of lead which almost brought my life of abysmal horseplay to an end. He thundered into view, his bonce as red as a brick. ‘By god you’ve done it now!’ he roared, and I was already running as fast as my arms and legs could take me.

‘Dad!’ I yelled, crashing into the study, ‘Uncle Snap’s having a funny turn - from failing to shoot even one mammal!’

‘Another fruitless siege,’ said Father in his deep voice, and looked pensively through the window at the largest tree. He turned from his drawing board, on which was set a convoluted architectural plan, and lay a hand on my head. ‘Your uncle,’ he remarked, ‘is a man for whom thought is an hourly ceremony.’

A stranger to joy, I had eked out my only endorphin by feeding it through a mangle. Yet such a callow boy was I that I sought to dissolve Snapper’s woe by nailing a multitude of soft, polychrome effigies to the forestation. Some of these did not even represent squirrels but toads, and every one was made of brushed corduroy and wool. However, as I hammered them up in the dark I felt they could pass as almost anything. And best of all, not only were there dozens of the brutes but they’d never move a muscle. ‘No running round the other side for
this
lot,’ said I proudly, driving the final nail.

But in the stark light of dawn Snapper stared in baffled indignation at a forest hung with boggle-eyed, multicoloured perversions of nature, as out of place as balloons in a hearse. No true animal was this densely packed with dried beans. Positioned near the tree-base, they were clearly the work of a small and immoral child.

Snap, who took a poor view of the fact that I had ever been born, entered my room in a broth of anger. I looked up from a join-the-dot picture of Trotsky’s abrupt demise. Where Snap’s mouth should have been was merely a blinding explosion of profanity. ‘Beanbag toads is it,’ he added, and began belting me with a violence over which I will draw a discrete veil.

That afternoon, I chanced upon a dead ladybird by the hothouse, and hurried to the drawing room. ‘Here’s something you can kill, Snapper,’ I said, swanning up with a matchbox. Pushing out the tray, I showed him the contents while tilting the box imperceptibly from side to side, so that the dead ladybird rolled apparently of its own accord.

‘Not dead,’ I countered with a nervous laugh. ‘Not dead Uncle, rolling - rolling for pleasure.’

‘Rolling for pleasure eh,’ muttered Snapper, his eyes like the gun-slits of a tank. ‘Do you expect me to believe this crudely-fashioned tale?’

‘Well don’t be offended Uncle but I don’t prance through life planning my every move in anticipation of what
you’ll
subsequently believe.’

Uncle Snapper strove visibly to contain his impulses and gestured at the bug. ‘What d’you think this microscopic trophy would look like on a wallmount?’

‘Oh Snapper,’ said Adrienne, my girlfriend and sister, as the family and lodgers sat identifying the evening meal. I was by now festooned with bandages. ‘You must make a sincere effort to keep your more demented opinions to yourself.’

‘I
beg
your pardon?’

Adrienne repeated her statement, staring at him levelly. But Uncle Snapper believed he could release his prejudices only by expressing them, and would believe this until he was buried in worms and clay.

In a final attempt to relieve his torment, I tempted a squirrel to the woodside shed and patiently taught it to play dead at the sound of a gunshot. But hearing shots and my cry of ‘Die!’, passing villagers feared the worst and twenty-seven of them alerted the authorities. I had to relate my elaborate plans to the local constabulary who, despite the stark simplicity of my account, demanded a demonstration. I was fast learning that official bodies communicate by synchronised limitation. Snapper shot Camille - as I had come to know the animal - stone dead. For this Snap was lauded by the constabulary and was slapped on the back so often his spine appeared through the pulp. Snap’s delighted surprise was as nothing to my shock on finding that Camille wasn’t play-acting and that I was being detained for mayhem and for weaving a windtorn web of lies to the law.

Back at the Hall, Father explained his plans to Snapper - a large, groaning treehouse rigged into the tallest garden oak. It was understood that Snapper would not only live there but become a figure of fear and superstition to the village children. This could easily be arranged - it had happened to Nanny Jack without any arrangements being necessary.

‘But that child attempted every trick in the book,’ Snapper complained, sobbing like a bullring clown, ‘to stop me killing one of them bushy vermin.’

‘Silence, brother. Did I, too, not make every effort when we were the boy’s age. Don’t you need ammo and medication from the village.’ Father fixed him with a stern look. ‘And wasn’t he the one made it possible for you to shoot something at long last?’

Snapper went before the cops and confessed to everything, including several genuine and horrific crimes of which none of us had been previously aware. He became a marked man, and we finally found him digging up fossil spuds in a rain-ripped field, barely human for the mud and darkness.

At breakfast it was decided that we could not harbour Snapper at the Hall. Father built the treehouse and Snapper moved in with his armoury, descending only for meals and an occasional whirling, snorting rampage of destruction.

As we buried Camille, Adrienne sang mournfully and dark-eyed in the rain:

And breaking down is sickly,

But your bones are all internal

The darkness was eating at her like a vacuum at a matchflame. The rain fell like Hiroshima dust. She kissed a rose and lay it on the burial mound. I wanted to remove her skulltop and slather my tongue through her brainfolds. Even in grief there is diversity.