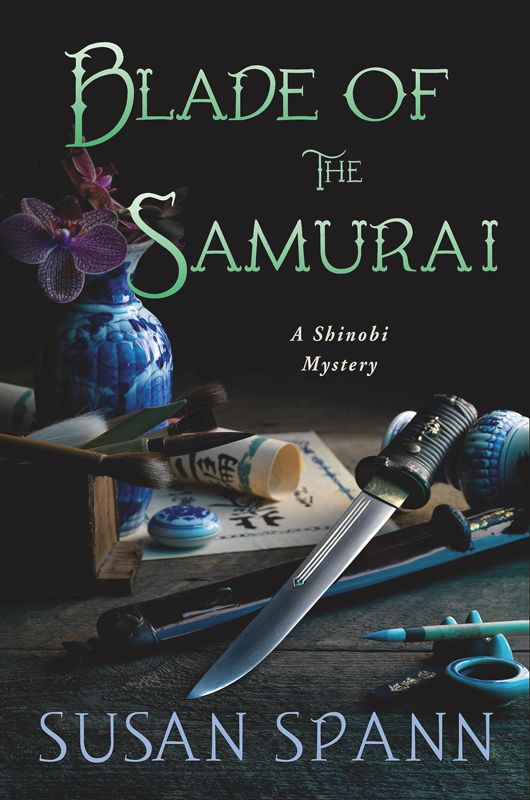 For Michael, for too many reasons to mention—but mostly, because I love you

If I wrote a thousand novels, I still wouldn’t have sufficient space to thank everyone who helped and supported me along the way. The list grows longer with every book I write. But, as always, some people require special mention.

To my husband, Michael, and my son, Christopher—thank you for constant love, support, and reinforcement. You keep my dreams focused and my butt in the chair.

To my incomparable agent, Sandra Bond, and my fantastic editor, Toni Kirkpatrick—thank you for believing in Hiro and in me. Working with you is an honor and a pleasure for which I continue to be grateful every day.

To my peer editors, David, Heather, and Amanda—thank you for your time, skills, friendship, and support. You make me better than I am alone.

To Dana Bate, Kelly Harms, Amy Sue Nathan, and Kerry Schafer, my fellow debut authors from the Debutante Ball blog’s “Class of 2013”—thank you for your friendship and support. It was an honor and a pleasure to celebrate each of your novels, and to have your help in celebrating mine.

Thank you to Joe, Master of the Interwebz, for everything from designing and maintaining my Web site to helping me figure out that the cat has reset my function keys.

Arigato gozaimasu
to Tomoko Yoshihara for helping with my research and identifying the proper location of the Ashikaga Shogunate in 1565.

And last, but certainly not least, thank you to Erika, Laura, Wing, Peter, Michelle, and all of the other friends—online and off—who encourage me and support this crazy dream come true.

The name on the cover is mine, but I could not do this without your friendship and support.

Hiro opened his eyes in darkness.

Night enveloped the room like a shroud, broken only by the beam of moonlight streaming through the open veranda door. The still air and the moonbeam’s angle told Hiro that dawn was still an hour away.

In most Kyoto houses an open shoji represented a dangerous oversight. For Hiro, a
shinobi
assassin turned bodyguard, the door was an early warning system that had just paid off.

He strained his ears, listening for the sound that woke him. He heard only silence.

A weight shifted atop Hiro’s feet as his kitten, Gato, twitched in her sleep. The shinobi found that reassuring. Gato’s ears were sharper than his own, and the cat never slept through sounds she didn’t recognize.

Hiro yawned and closed his eyes to weigh the merits of early-morning exercise against two more hours of sleep.

A board creaked outside the veranda door.

The loose board sat between Hiro’s door and the one to the adjacent room, where Father Mateo slept. The Jesuit had wanted to fix the squeaky timber, but Hiro insisted the board stay loose to help the shinobi protect his Portuguese charge.

Hiro slipped out from beneath his quilt and pulled on a pair of baggy trousers. As he tied the ankle straps to keep his cuffs from tangling in a fight, he listened for the second creak that would tell him when the intruder stepped off the board.

A surge of adrenaline loosened Hiro’s muscles. Only another shinobi could move with sufficient stealth to prevent the board from creaking a second time.

He wasted no time wondering why an assassin had come. Hiro’s clan, the Iga
ryu,
had ordered him to defend the Jesuit’s life at any cost, and Hiro would not allow himself to fail. He grabbed a dagger from his desk and scurried up the built-in shelves on the southern wall of the room. He was glad he had reinforced them to hold his weight.

The wall ended at rafter height, leaving plenty of space for a man to crouch beneath the peaked thatch roof. Hiro crawled onto the nearest rafter and glanced over the wall into Father Mateo’s room. The Jesuit slept soundly.

A shadow blotted out the moonlight as a human form appeared in Hiro’s doorway. The intruder paused only a moment, then stepped inside.

Gato arched her back and hissed before vanishing into the shadows.

The assassin wore a cowl that hid his face. He moved across the floor with an inward twist of the toes that Hiro recognized as a hallmark of the Iga
ryu.

This killer had not come for the Portuguese priest.

Hiro gripped his dagger and readied himself to jump. As he drew a final, preparatory breath he caught the faint but unmistakable scent of expensive wintergreen hair oil.

Betrayal seared through Hiro’s mind like flame. Only one Iga shinobi used that scent, and until this moment Hiro had considered the man a brother.

Plunging a knife into Kazu’s heart would hurt Hiro almost as much as suicide.

Almost, but not quite.

Hiro leaped from the beam as, below him, Kazu whispered, “Hiro? I need your help.”

It was too late to arrest the fall. Hiro flung his arm to the side to stop the knife from striking a fatal blow.

Kazu jumped away, stumbled, and pitched forward onto the futon.

Hiro landed in a silent crouch, knife ready. He would give Kazu a chance to explain, but didn’t let down his guard.

“I almost killed you,” Hiro hissed. “What were you thinking, coming here unannounced and at this hour?”

Kazu pushed his cowl back onto his shoulders. His worried eyes reflected the moonlight.

“There’s been a murder at the shogunate.”

“The shogun?” Hiro’s expression softened as he realized why Kazu had taken the risk.

Shogun Ashikaga supported the Jesuits’ presence in Kyoto, despite his opponents’ demands that he expel the Portuguese missionaries or execute them as spies. The shogun’s death would threaten both Father Mateo’s life and Hiro’s assignment to protect the priest.

“Not the shogun,” Kazu whispered, “his cousin, Saburo.”

“Your supervisor?” Hiro’s gratitude splintered into anger. He barely managed to keep his voice a whisper. “Have you lost your senses? You risk exposing us both by coming here.”

“Please.” The catch in Kazu’s voice reminded Hiro that Kazu had only twenty years to Hiro’s twenty-five, and although the younger shinobi had come to Kyoto first, Hiro had been an assassin for years before Kazu even received his first official orders—an assignment to spy within the Ashikaga shogunate.

“Someone murdered Saburo with my dagger,” Kazu continued. “The shogun will think I killed him.”

“That doesn’t excuse your acting like a fool.” Hiro inhaled slowly to calm his fury. It didn’t work. “Have you forgotten your training completely? If something compromises your cover, you leave Kyoto. Even a novice knows not to put others at risk.”

“I couldn’t leave the city. No one passes the outer barricades at night without a travel pass and a good excuse.” Kazu raised his hands, palms up. “I don’t have either.”

Kazu’s fear didn’t soothe Hiro’s anger. Still, the damage was done, and further scolding would not undo it. The shinobi code required Hiro to help a clansman in need unless doing so would compromise his mission. Since Kazu’s arrest might expose both men as shinobi, the choice seemed clear.

“Are you sure no one followed you?” Hiro asked.

“Then tell me what happened, in detail—but first, get off my futon.”

Kazu knelt on the woven tatami that covered the floor.

“I was working late,” Kazu said, “updating the schedule for the shogun’s personal bodyguards.”

“You work in the records bureau,” Hiro said, “not shogunate defense.”

“True, but a month ago Saburo persuaded the shogun to transfer the bodyguards away from military command and under Saburo’s personal control. He said it wasn’t wise to trust a man from another clan with the shogun’s personal safety. The shogun agreed.”

“Not all of them,” Kazu said, “and with Lord Oda eager to seize the capital and the shogunate, Saburo’s concern makes sense. The shogun thought so, anyway.”