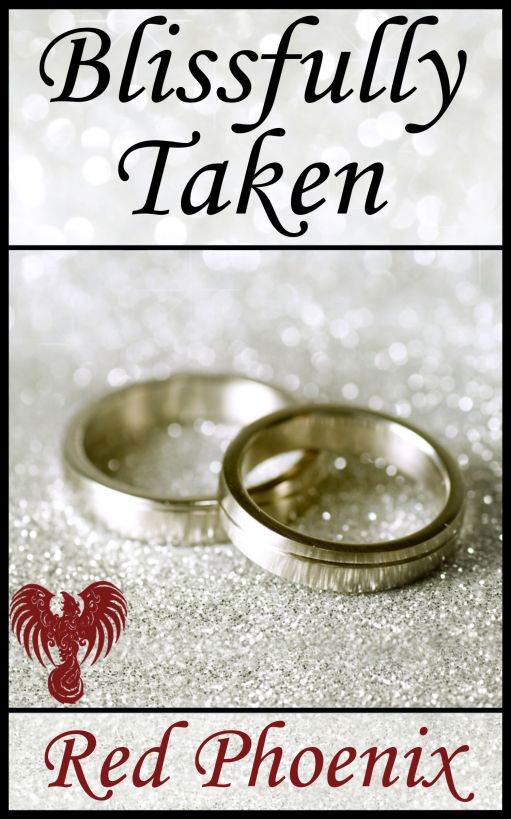 This eBook is
licensed for your personal enjoyment only. Your support and respect
for the property of this author is greatly appreciated.

This book is a
work of fiction and any resemblance to persons, living or dead, or
places, events or locales are purely coincidental.

Disclaimer: The material in this
book is for mature audiences only and contains graphic sexual
content. It is intended only for those age 18 and older.

About the Author
Red Phoenix

Jenny awoke, but kept her eyes closed.
His hand was playing with her breast using feather light caresses.
When it started traveling south and tickled her stomach, she
flinched and opened her eyes. His dark brown eyes smiled down at
her. “Morning, Kumquat.”

He chuckled. “More than just my face,
my love…” Dan’s fingers traveled between her legs and began the
light caress of her dark mound. He started off slow, waking her
body gently to his lust.

Jenny opened her legs to him and
turned her head into his chest, breathing in his masculine scent.
What a way to start the morning…

He spread her wetness over her sex so
his fingers could slide easily over her clit. She pressed against
his hand and moaned softly. The fire was starting deep within. When
she tried to reposition to return the favor, he whispered, “Don’t
move. Just enjoy…”

She lay back and let Dan weave his
spell of passion. His fingers glided over her folds, flicking her
clit, moving to her opening to tease the rim. She shifted as the
tension grew; Dan knew her body so well it was uncanny.

He penetrated her with two fingers and
began stroking her G-spot. Jenny groaned as her hips naturally
tilted in response to the stimulation. His fingers swirled around
that sweet spot, taking away any chance of control for her. Her
clit started pulsing in pleasure. “Dan…” she breathed.

“
Aaaa…” Her voice cut off
as she was overcome by the sweet climax he created. She pressed her
lips against his chest as it rolled over her.

“
Nothing sexier than
watching you come,” he said as he pulled his fingers from her and
lightly spread the wetness on his fingers over her skin. Dan had a
way of making her feel sexy and perfect, as if every part of her
was to be treasured.

“
I love you.” She adored
saying those little three words.

He kissed her on her forehead. “I love
you too, woman.”

Jenny suddenly felt a stab in her
heart. She buried her head in the pillow, willing it away -not
wanting it to ruin the moment.

There was no hiding it from Dan, he
knew her too well. “Yes. We have to tell Ryan today. He deserves to
be told the truth as soon as possible.”

“
This will crush him…” she
whimpered into the pillow.

“
Ryan has been pulling
away for a while now, Jenny. I do not think this will come as a
surprise.”

“
Do you want to tell him
together?”

“
Well, I will have my cell
phone with me. If at any point you want me there, just
call.”

She sighed miserably. A pit in her
stomach was growing larger with each passing minute. “I’d better go
after breakfast, I guess. The sooner the better.”

He brushed back a tendril of her black
hair from her cheek. “I agree. It would be better for all of
us.”

Jenny headed out as soon as breakfast
was over. She might as well have skipped the meal since her stomach
was tied in knots and she couldn’t eat a thing.

“
I’m near if you need me,”
Dan reminded her, before he got into his own car.

Jenny drove back to the city,
trembling the entire drive. How would Ryan take the news that she
was marrying Dan? That she was ending their relationship of four
years? She hoped that Dan was right and that Ryan would see this
coming. If not, it was going to be a heartbreaking
confrontation.

Jenny stood at the door, afraid to
announce her arrival. Normally she would just walk in, but now
everything had changed. She held her breath as she rang the
doorbell and waited. The door swung open as if he was expecting
her.

Ryan pulled Jenny into his embrace and
groaned, “You came back!”

He ushered her inside and shut the
door. “Sit down. Tell me what you are thinking.”

She looked into his jade colored eyes.
She hated that she was about to bring pain to those familiar eyes.
“I’ve been with Dan.”

Ryan pushed away from her and sat on
the other end of the couch. “Why would you do that?”

“
It wasn’t planned, we
both ended up at the cabin.”

Anguish clouded his gaze. “The
cabin.”

“
I came back today to tell
you in person…”

He put his hand out to silence her,
standing up abruptly. “I don’t want to hear it. You need some time
to calm down. You aren’t thinking clearly right now.”

She stood up slowly and walked over to
him. “Ryan, Dan and I…”

Ryan yelled at her, “I don’t want to
hear it! That fucking Dan… as soon as he saw the
chance…”

Jenny would not be swayed. “Ryan, we
are getting married. Dan proposed yesterday.”

“
Damn him to hell!” Ryan
turned on her. “You fucking take it back. You are not marrying that
mother fucker. Do you hear me?”

“
Don’t say it. Don’t you
fucking say that to me! You and Dan, all this time... playing me
for a fool. Kelly was right.”

Jenny returned the fire. “Don’t you
understand? Kelly did this! You let Kelly do this to us. It was
perfect, the three of us together. But you let her ruin what we
had.”

Ryan rammed his palm into her chest
and pushed her up against the wall. His voice was deadly calm in
its hatred. “You are to blame, not Kelly. I will never forgive you
for this betrayal.”

“
My betrayal? You’ve been
siding up with Kelly for god knows how long, and you hurt me two
days ago. Just like you are doing now,” she snarled.

He did not loosen his grip, laughing
angrily. “Oh, that’s it. Blame me. I bet you and Dan talked about
me the whole time you were up at the cabin. Putting me down,
laughing at my expense.”

Ryan pressed harder against her chest,
hissing. “Don’t… ever…call him that again.”

Jenny struggled to breathe until he
finally let go and she gasped for air.

She wanted to protest, to say
something to preserve their relationship on some level, but there
was nothing that could fix it. Jenny turned away from Ryan and
headed towards the door.

She hesitated when she put her hand on
the doorknob.

His voice cracked, “I need
you.”

Jenny closed her eyes. This was Ryan,
the man she had dated since college, the man she planned to marry
once - the man she still cared about. She turned around and sat
down when he motioned her to the couch.

“
Good,” he stated. “We’ve
been here before. You get mixed up when you are around Dan. It
takes distance away from him for you to think straight.”

She was about to disagree,
but he put his finger to her lips. “No, don’t say anything.
Listen.” He put his hand down and continued, “I have loved you
longer than Dan. I have loved you through good times and bad. You
will never find someone as loyal as I am. I forgave your
transgression with Dan. I misspoke out of anger earlier, I
will
forgive you now.
However, this has to stop. You are not allowed to see that… asshole
again. Ever.”

She shook her head. “You aren’t
listening to me. I’m marrying Dan. I already said yes and nothing
you say will change that.”

Ryan growled under his breath, “You
are an idiot. He will leave you high and dry like he left Kelly. He
doesn’t love you. He is incapable of love… or friendship for that
matter.”

“
Dan loves me, Ryan, and I
love him. I wish it was different. I wish the three of us could
have made it work. But you pushed us away.”

Jenny looked down at her lap and
fiddled with the hem of her skirt. “Maybe we both did.”

Silence dragged on for an
uncomfortably long time before she finally braved an answer. “Well,
I’m not.”

Ryan shot off the couch.
“Damn you to hell, Jenny! I have given you everything.
Everything!
How can you
treat me so callously when all I have ever been is kind? Are you a
fucking whore? Is Kelly right about you?”

Jenny narrowed her eyes. “Kelly… it
always comes back to Kelly. She is playing you like a puppet and
you don’t even see it.”

“
No!” he screamed. “You
played me, Dan played me…” Ryan paced around the room in a state of
rage Jenny had never thought he was capable of. “God, I hate you!
But fuck it all…” his face crumpled, “I still love you.”

Jenny’s heart broke for Ryan. He loved
her, he always had. He’d proven it at the cabin when he took her
back, then later when he brought Dan into their relationship, but…
if she had to make a choice it would always be Dan.

“
Rye…” she saw the hope
rise in his eyes and realized she had to release him now. It would
hurt both of them, but it was necessary to move forward. “Ryan, I
care about you. I always will, but I am marrying Dan.”

He fell to his knees. It shocked
Jenny. She moved to comfort him and had to stop herself.

Ryan looked at her in desperation.
“Don’t.”

Her lips trembled as she turned
towards the door. There was nothing more to say. She needed to get
out of there.

Jenny turned towards him with tears in
her eyes. He held his hand out to her. “Don’t leave me.”

She opened the door and rushed out,
her heart breaking in a million pieces. She ran to her car and took
off, but she pulled over a block away and cried. She howled in pain
- hating herself, hating what she had done.

It wasn’t until she heard her cell
phone that she came back to reality. She sobbed several times
before answering Dan’s call.

She could barely gasp out the words.
“No… Dan… I am not.”

“
Did anything happen? Are
you hurt?” he asked in concern.