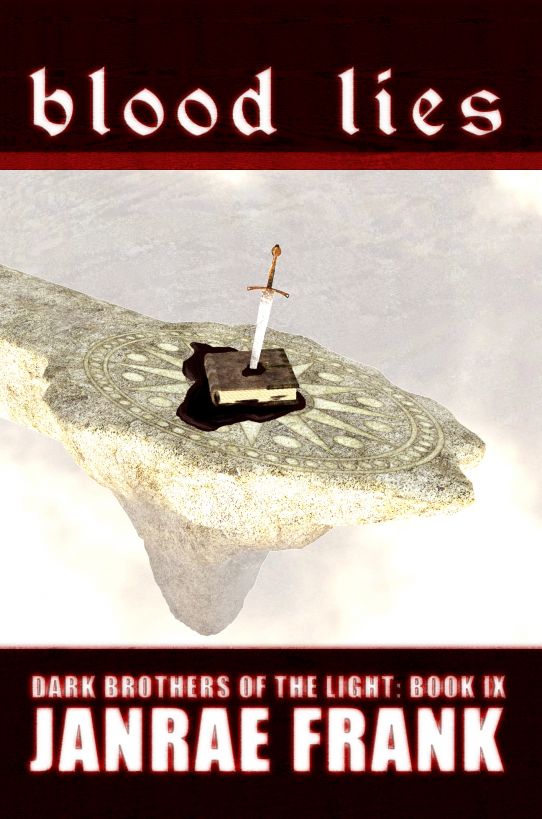 DARK BROTHERS OF THE LIGHT

JOURNEY OF THE SACRED KING

Sins of the Mothers

The Silent Mutiny (previously published as My
Father's House)

Children of the Risen Dead (previously published as
Children of Wrath

This ebook is licensed for your personal
enjoyment only. This ebook may not be re-sold or given away to
other people. If you would like to share this book with another
person, please purchase an additional copy for each person you
share it with. If you are reading this work and did not purchase
it, or it was not purchased for your use only, then you should
return to Smashwords and purchase your own copy. Thank you for
respecting the hard work of this author.

This is a work of fiction. Names, characters,
places, and incidents are either the product of the author's
imagination or are used fictitiously, and any resemblance to actual
persons, living or dead, businesses, establishments, events, or
locales is entirely coincidental.

Copy-editing and proofreading by Mark
Prins

I smell her scent, not born of woman

The Beast's scent is on the breeze

Through darkling woods she stalks

Through halls no sane mon walks

Her glance, her scent will make you
freeze

A rush of lust brings you to your knees

She never listens to your pleas

leave your corpse lying in the mud.

Those slain not become her slaves

In madness longing for her fangs.

She is pretty, but she is fell,

If underneath the moonlight bright

You should glimpse her in the night,

Flee before she nears you, mon

You have not strength to fight her,

And no magic will affright her,

Once there were three brothers, Brandrahoon the
vampire, Isranon called the Dawnhand, speaker to spirits, and
Waejonan the Accursed, first of sa'necari. Isranon defied his
brothers and was destroyed, his descendants forced into the
darkness. In those days there rose up three women, Asharen, Danae,
and Rowan. They built Shaurone to hold back the brothers' darkness.
And then there was Abelard who will be born again into his own
lineage to ride once more beneath Rowan's banner. Mage-paladin to
the God Kalirion the Lord of Light, healing and prophecy, Abelard's
return will signal a god-war. Should he fail or perish, then only
the Children of the Risen Dead will stand between the Fathers of
Darkness and the destruction of the world.

Priest of Willodarus, God of the Woodlands
and Wild Creatures.

CHAPTER ONE
A PRETTY FACE IN ILDYRSETTS

The icy weather along the Blood Coast
worsened as the Army of the Renunciate traveled north; they planned
to winter just outside Ildyrsetts, on the walled estate of Edvarde
Mistward who was a friend to their liege-lord as well as uncle to
King Jurgen VI. The number of refugees accompanying them had begun
to dwindle as soon as the company started passing the great
northern cities, where they could attempt to seek out
sh
elter and warmth away from the battering weather.
Snow would soon close the mountain passes to the east, as fresh
storms piled more layers of white death higher and higher over the
roads.

The Renunciate, Lord Isranon Dawnreturning,
led his patchwork, yet formidable, brigades to force battle with
Gylorean Galee, the God-Queen of Minnoras. Sensible myn fled before
the threat of her advancing demonic armies. The Sacred King of
Rowanhart, possessed of the largest standing army in the northwest,
was marching to the aid of Darr and Gormondi. The mighty empire of
Shaurone had sent soldiers and paladins to support Beltria. No one
cared about the rabidly monotheistic realm of Angrim, which was
bearing the brunt of Galee's ravages: Isranon's destination was
Angrim.

Stygean Loosestrife, Lord Isranon's
thirteen-year-old apprentice, rode in the middle of the van near
his master. The boy tucked a strand of his black, silken hair into
the sheepskin-lined hood framing his coppery face. His hand slipped
beneath his shirt, seeking the heavy iron of the missing slave
collar. It had been gone for many weeks, yet he still expected to
find it there. He lowered his head to glance surreptitiously at his
nemesis, Jingen Scathwick, his master's other apprentice. They had
grown up together, and Stygean had believed them to be friends
until a month ago. Now he suspected they never had been. Jingen had
been privately goading Stygean into acts of defiance that got him
into trouble; the final act had backfired and cost the life of
Stygean's father. Jingen turned his gaze upon Stygean, and the boy
flinched, focusing his attention to the units riding about
them.

Ocealayen mercenaries, known as kandoyarin,
served as the mainstay of the army's forces. Stygean's father,
Liuthan, had once been one of the strongest members of their ruling
cabal, the Five Captains of the Coast. Liuthan had lead of an
abortive coup against the other four, who never suspected that
Ocealay had been infiltrated by the sa'necari. They signed up
individually and in small groups out of a desire for revenge and to
recapture their honor. Stygean avoided them as much as possible,
for while they were not likely to do him serious harm, they tended
to take out their ire with his father on him verbally – making
certain that the son paid for the sins of the father.

At the very front rode the members of a
small lycan battle-clan who served as their scouts. Their
chieftain, Nevin 'Scarface' Igguiden, had terrified Stygean for a
long time. The gruff wolf had an ugly scar traversing his face from
his forehead, across a broken nose to his upper lip that was
half-split from a wound that had failed to heal properly. It gave
his words a sibilant quality. His black hair reflected his coat
color in wolf form, with a bit of grey in it. Nevin's hoarse,
growly voice always sounded more ready to rebuke than praise. Yet
Stygean's fear had faded into respect after Nevin became his
armsmaster, training him in all things martial.

Stygean, Jingen and Lord Isranon were
sa'necari-born: an arcane mutation created by a necromantic,
religious cult more than four thousand years ago. In the beginning,
all sa'necari were created through a ritual of rape and death,
allowing them to shatter and devour the souls of their victims.
Each rite they performed made them stronger, more powerful, and
eventually nearly unkillable. Over the generations, their genetic
structure altered, and their children began to be born sa'necari,
gaining their fangs and appetites at puberty.

His mentor and he were renunciates. They had
rejected the ways of their sa'necari race and never committed the
rites. Theoretically, Jingen was also. Stygean had good reason to
suspect that it was all a ploy with Jingen, and that his former
friend would grab himself a rite at the first opportunity. He
veered away from those thoughts – for they made his stomach clench
– and glanced back over his shoulder at the units riding behind
them. Isranon had insisted upon having the most vulnerable units in
the middle of the van, which included the medical wagons, the
baggage train and the nibari – the genetically altered human cattle
of the sa'necari and vampires. They produced blood with such
efficiency that they could survive blood loss at far greater levels
than normal humans. Unless arcanely modified by their hemophage
owners, they were docile and non-assertive to such a degree that
they could be led to their deaths without resistance.

Behind the lycans came the Ymraudes, a
company of female vampires, led by their chieftain, Zulaika.
Stygean felt more comfortable with the vampires – simply because
they were both hemovores – than with the lycans and the humans. The
Ymraudes' numbers had grown over the course of the march and
reached fifty odd. They often referred to themselves as the 'proud
six hundred', so Stygean knew there must be a lot more of them
somewhere.

His fangs emerged from their sheaths, and he
licked them in a gesture equally comprised of nervousness and
hunger. Two flasks hung from his saddle horn. One was water and the
other was blood, which was skillfully preserved by a mage spell.
Preserved blood was a poor substitute for sinking his fangs into
flesh and lapping it fresh from the wound. However, it was better
than nothing and kept his bio-alchemy in balance.

Stygean had mixed feelings about Amiri, the
Ymraude shaman, riding on the lead medical wagon. On the one hand,
it had intrigued him from the beginning to discover someone with
skin darker than his own deep bronze. She had black skin and nappy
hair that she wore in cornrows and a wealth of thin braids heavily
laden with wood and ceramic beads that tended to clack loudly when
she shook her head vigorously. Amiri seemed to know more about
everything than anyone else, and the breadth of her knowledge
fascinated Stygean. She also made him feel like a bug under glass
at times. Hence, he squirmed inwardly whenever she gave him a long,
appraising glance.

Randilyn, Amiri's nibari, rode beside her on
the wagon seat. She noticed Stygean looking at them and grinned.
Stygean's cheeks warmed. He felt closer to Randilyn than to anyone
else. She was Amiri's polar opposite, with a fair complexion and
hair the color of butter cream frosting. Where Amiri was cold and
calculating; Randilyn was warm and emotional. The nibari had become
a second mother to Stygean following the death of his own. It had
been Randilyn, even more than Isranon, who had turned him to the
light. That and the promise he had made to his dying father that he
would embrace the teaching of the renunciates.

He had puzzled for months over the Ymraudes
and their nibari, for neither had any males among them. Stygean had
eventually wheedled the information from Randilyn: Ymraude nibari
were made, not bred. They were certainly different from any other
nibari he had ever known. For one thing they were audacious and
capable of defending themselves. They actually argued with their
masters, which completely amazed him.

Sometimes Stygean thought they ought to find
another word for them. The nibari of his experience were the
genetically altered human cattle of the sa'necari and vampires. For
thousands of years, all forms of aggression and assertiveness had
been bred out of them, replaced by utter compliance and
docility.

He slowed his horse, dropping back to ride
beside Randilyn's wagon. She smiled down at him, reached beneath
the seat and brought out a paper wrapped package.

"Go easy on it, Stygean. We won't be able to
get more until we reach Lord Edvarde's in a few hours."

Stygean leaned in the saddle to accept the
gift, a huge grin on his face. "Candy?"

The pines and ivy-drenched oaks had, over
the centuries, slowly overpowered the maples that once dominated
the forest. Here and there, Stygean could see the immense, gnarled
trunks of old growth maples with their twisted fans of branches. It
made him wonder what it would look like come spring. Randilyn and
Isranon had pointed out the interesting aspects of the natural
world to him so often that Stygean had begun to pay attention and
notice them for himself.