Read Blood of the Demon Online

Blood of the Demon 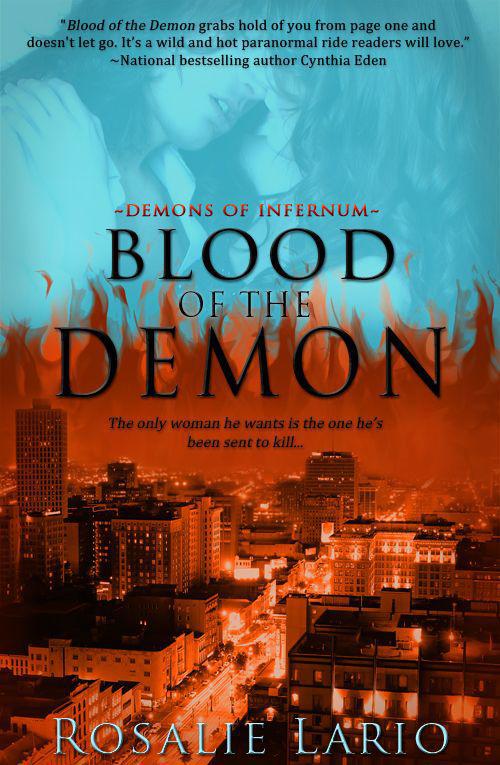 All rights reserved, including the right to reproduce, distribute, or transmit in any form or by any means. For information regarding subsidiary rights, please contact the Publisher.

Entangled Publishing is a subsidiary of Savvy Media Services, LLC.

To my parents, Gladys and Ramiro, who instilled in me the belief I can accomplish anything I put my mind to; my sisters, Dixiana, Rebecca and Jeannette, for always believing in me—no matter what; my Titi Annie, who taught me that a strong woman may fall, but she never stays down; and last but certainly not least, to Joel and David. You are my heart, my life, my inspiration. Accomplishments mean little without loved ones to share them with.

This one’s for all of you.

She wasn’t what he’d expected.

Keegan crouched on a nearby roof, watching, waiting for her gallery to clear out. A stray gust of cold wind whipped through the night air, ruffling his jacket. It didn’t matter. Considering where he’d come from, the cold was a welcome relief.

The woman had looked fragile when he’d caught a glimpse of her through the store’s large window front. Undeniably beautiful, with her long, honey-brown hair falling in waves around her heart-shaped face—but fragile nonetheless.

It was the perfect cover. No one would ever believe what she truly was, what lived inside her. But the blood never lied. She wasn’t what she seemed.

Despite the gravity of the situation, Keegan had felt a stirring of lust rise within him at the sight of her, blindsiding him with its unexpected force. It had simply been too long since he’d gotten laid, something he’d have to remedy soon. Didn’t have anything to do with the woman. It couldn’t.

After all, she might very well be dead by the end of the day. Because if he received the order, he’d have to kill her.

He fished his cell phone out of his jacket pocket and called his brother. As expected, Taeg answered on the first ring. Skipping the useless chatter, he said, “I’ve got an eye on the target.”

“That’s perfect.” Even over the phone, the relief in Taeg’s voice was palpable. “What now?”

“You don’t think Mammon has managed to find her yet, do you?”

Keegan gave a short laugh. “If he had, he would’ve taken her already. Waiting’s not his style.”

“I’ll keep you posted.” He hung up without waiting for a reply.

Even though he couldn’t see her from this vantage point, he wasn’t worried about losing her. Not after he’d tagged her scent. He closed his eyes and inhaled, giving himself over to his sense of smell. Sorting through the various odors he’d picked up—the rich aroma of coffee, the ashy smell of a discarded cigarette, the pungent stench of rotting food—he discarded them, one by one.

Yes. There she was. Her scent was unique. Like strawberries and cream. Something he’d tried only recently and discovered he loved.

Would she taste just as sweet?

Shit.
What was he thinking? She wasn’t a potential lay, but a dangerous and powerful weapon. Maybe even the enemy. He’d do well to remember that.

Finally, the store emptied of everyone but her. He supposed the right thing would be to go in and question her. But what if Mammon was no more than a few steps behind him? He couldn’t take that chance. Not when the stakes were so high.

He would take her back to the apartment with him. There, he could question her at leisure and decide what to do without having to worry about Mammon or his henchmen discovering them. But what were the odds of her going along with him willingly?

Well, he couldn’t worry about that now. He’d simply take her.

The night had grown dark enough that he didn’t bother heading for the roof exit. Instead, he walked to the side of the building facing the narrow alleyway and stepped off. He landed the six-story fall with a thud that shook the ground. A cracking sound, followed by a twinge of pain shooting up his right leg, made him pause, but he ignored it as the fissure healed itself. The homeless man lying unconscious in a puddle not ten feet away mumbled and stirred before growing still once again.

Keegan crossed the street, his gaze singlemindedly locked on the figure of the woman visible through the window as she buzzed about the front of the gallery. A ray of light from a small lamp decorating the window caught her hair, spinning it into a web of gold. In that lighting, she looked almost like an angel.

But why was he thinking about the color of her hair? She wasn’t an angel—not by a long shot.

And her luck was about to run out.

Brynn Meyers stifled a yawn as she tidied up the eclectic space of her showroom floor. With its old furniture and traditional chandeliers, the space more closely resembled an antiques shop than an art gallery. She’d started it several years ago with the inheritance she received following her father’s death from a car accident, just a short time after her mother died of breast cancer. It seemed like she spent every waking moment here. If she wasn’t working, she was painting in her small studio located in the back.

“Just two hours of painting tonight, then I’ll go to sleep early for a change,” she told herself. “This time I mean it.”

God, how pathetic was she? Was she so lonely that she had to start bargaining with herself?

No, not lonely, Brynn. Just a loner. There’s a difference.

Her hand grazed the easel holding the painting that had arrived earlier today. She turned to examine it more closely. Created by her favorite artist, she was drawn to it because of his tendency to incorporate unusual materials into his work, such as the tattered pieces of muslin glued to this painting. It was an amazing work of art, and the cloth obviously old and worn.

Brynn brushed her hand against the gathered fabric. Closing her eyes, she focused on the feel of it at her fingertips, on the shadows of memories that whispered to her, begging her to uncover them.

The muslin yielded beneath her touch, revealing its deepest secrets. Her vision narrowed, focusing in on the fabric as its memories hurtled toward her. Several hundred years old, its journey to her began as part of an elegant dress worn by a Frenchwoman. Images of the woman’s trembling fingers flowed into Brynn’s mind, and she smiled at the impressions of the woman smoothing the material down, eagerly anticipating a visit from her secret lover. Then, in a scene years later, someone tore apart the dress for scraps. Even later, the bits of fabric were twisted and crafted into a rag doll, cherished for many years by the little girl who lovingly slept with it until she became too old for dolls.

The flashes of memory faded away. Taking a deep breath, she slowly returned to the present.

It’s just a bit of fabric.
She often had to remind herself of that. The memories embedded in inanimate objects tended to make them seem alive to her. But they weren’t. They were just conduits for energy. And for some reason, she had the ability to sense this energy. This was a gift she’d had her whole life, and what had initially drawn her to art. Each piece had a story, an experience, rooted within it. Older art pieces could be positively overwhelming.

The front door opened with a loud chime and Brynn snatched her hand away. Not like anyone would ever know what she’d been doing, but for some unexplainable reason, she always feared her gift would be discovered.

She lifted her gaze to find a tall, well-built man standing in the doorway. Her breath caught as her eyes traveled from his skintight black shirt, highlighting every curve of his muscular chest, to the dark, shaggy hair framing his olive-toned face. A shiver ran through her. He embodied Dark and Dangerous, with the leather jacket to match.

And
crap
, she was ogling him like a slab of meat in a lion’s den.

She wiped her suddenly damp palms against her slacks before moving forward to greet him. “Hi, welcome to Meyers Gallery. I’m Brynn.”

He stared at her outstretched hand for so long that she fidgeted. Maybe he’d noticed her wiping her palms and had gotten grossed out. Great.

She started to pull her hand back, but he stopped her by at last reaching out to clasp his hand over hers. A tingle of awareness flashed across her palm, so sharp she had to struggle to hold back a startled gasp.

“What?” Brynn took a second to remember what they were talking about. Once she did, she flushed anew. This hunk of a man was making her lose her train of thought. “You mean you know my name? Have we spoken on the phone before, then? Are you here about one of the new art pieces?”

“No,” he said, without releasing her hand.

His grasp was warm, heating Brynn from the inside out. The sensation was so disconcerting she needed another long second to process his response. “No? Well then, how can I help you?”

The man smiled, but something resembling regret flashed through his bluish-green eyes. Lord, they were amazing.

“Sorry,” he said, the sound curling around his lips like a lover’s caress.

Her gaze drifted to his full, luscious mouth, and she couldn’t look away. If she didn’t get him out of here soon, she was afraid she might jump his bones. Never before had she felt so viscerally attracted to a man, and to say the least, it was unnerving. This was the sort of distraction she didn’t want or need.

“You’re sorry? About what?” She tried to tug her hand back, but the man’s grip held firm.

His left arm came at her so fast she only saw a flash of it, right before his fist connected with the side of her face. There was a burst of pain. Then, she went blissfully numb.

He’d made it all the way Uptown with an unconscious woman in his arms and hadn’t been spotted once. Not bad. Then again, he did have a few assets at his disposal. Like not having to use the ground.

Keegan carried the woman’s limp figure into the Upper East Side penthouse apartment the Council had lent him and his brothers. The place was a far cry from the tiny shack he lived in back at home—an office, four sizable bedrooms, and an amazing view of the city skyline from the wall of windows in the living room. Too bad the magnitude of the situation didn’t allow him to enjoy the view.

Taeg and Dagan, however, seemed to have no qualms about living it up. Sprawled out on the huge leather sectional in the living room, beers in hand, they watched some sports game on the large plasma television. The two of them didn’t even look up when he entered the room.