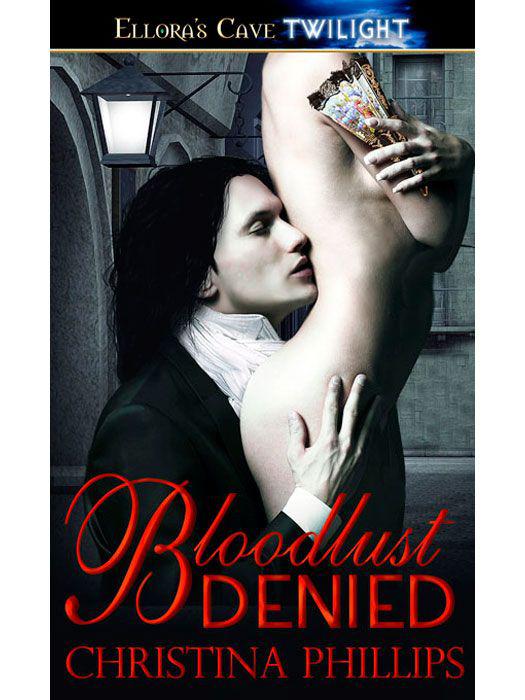 Tired of the thin-blooded aristocrats in 1815 London, Alexius yearns for better sport. He is drawn to a dark-haired seductress who shows no fear and refuses to obey his commands. Entranced by such novelty, he denies his bloodlust and decides to keep her to warm his bed.

Immortal vampire hunter Morana has never mistaken her prey before, but the dark stranger mesmerizes her, enticing her to forget everything but the dangerous pleasure she finds in his arms.

Neither one can deny the pull of the other, but there is something beyond the lust—a recognition neither can put a name to. The past and present collide and unless they discover the truth behind the lies, Death will triumph once more.

For Oliver with love

Thanks also to my awesome agent Emmanuelle Morgen, my fabulous editors Krishan Trotman and Vicky Reese, cover designer Dar Albert and all the team at Ellora’s Cave who work so hard behind the scenes.

And as always a huge thank-you to Mark and our children. Basically, for putting up with me!

The rich, tantalizing scent of feminine blood drifted on the warm breeze, igniting every sensitized nerve Alexius possessed. Raw need blazed through him and he turned toward the source, ignoring the three young ladies who fluttered their eyelashes and pouted their lips in a vain effort to halt his departure.

He no longer desired their bodies, their mouths or their weak, insipid blood. For the first time in millennia, excitement coursed through his veins as the intoxicating aroma of the unseen female permeated his mind, his flesh, the marrow of his bones.

The dark garden of the London townhouse was strewn with glittering lanterns, leaving few places to hide for the young ladies in their finery and the gentlemen who hid their base desires beneath a veneer of social mores.

His prey wasn’t here, among these simpering virgins or their preening mamas. Yet her evocative fragrance spun through his senses, silken tendrils enticing him to her.

He left the property and paused on the cobbled pavement, inhaling the summer air.

Again, her scent teased him and his heart, which had no earthly reason to beat, thundered in his chest, pounding blood through arteries and heating his body as nothing had heated him in years without number.

But where was she?

He swept his preternatural glance along the deserted street, then cast his psychic vision farther. Shimmers of disbelief clouded his rising impatience.

How far from him was she?

It didn’t matter how far she was. He’d find her, because she called him.

The refined garden square of St. James faded into the distance, and the dank underbelly of London rolled over him like a fetid corpse. Whores called out to him, reached for him, their already dead eyes following him. But tonight they weren’t enough. Their polluted, weary blood offended his senses and revulsion skittered along his spine at the thought of slaking his hunger with any but the one he sought.

He turned into another dark alley, the stink of decay and despair wrapping around him in an unwelcome caress of death. But threaded through every beat of this misbegotten city
her scent
throbbed, rich, vibrant.
Closer.

So close, he could taste the sweetness, savor the texture, feel the thick luscious fluid as it pumped down his throat. Lust stirred deep in his groin, thickening his shaft and the haunting melody of a single violin scarcely penetrated the heavy thud of desire that pounded through his temples.

And then he saw her, captured in the flickering light of a single lantern. Long black hair cascaded down her back and slender arms arched above her head as her lithe body undulated to the exquisite strains of the violin.

She appeared oblivious to her captivated audience and Alexius ignored the dozen or so drunken men gathered around her. They were of no consequence. This woman was his, and he intended to have her.

The intricate crescendo sank into his brain, pounding in tandem with escalating lust. The woman spun faster, heedless of the broken cobblestones, heedless of his deadly intent. Focused only on her own pleasure in the music, in the movement, in the sensuous cocoon she wove.

With dramatic flourish, the shadowy musician ended the solo, the final note echoing through the dark alley like the call from a lover long since forgotten. Yet Alexius couldn’t move toward her. It was as if the magic eroticism of her dance still enchanted him.

She flung back her head, her wild hair framing her face, and looked directly at him. His heart, no longer a slumbering organ, slammed against his ribs, pulses escalating.

He hadn’t felt so alive in millennia.

The irony amused him, but only fleetingly. Her breasts strained against the flimsy material of her bodice with every erratic breath, and her musky arousal meshed with the scent of her blood and the fresh fragrance of her skin. Desire throbbed at the sensory image of a phantom hand grasping his cock, and savage hunger shredded his control.

One smoldering glance sent the rest of her admirers slinking back to their own private purgatory until it was just the two of them. And that damned shadowy violinist.

He held out his hand. Waited for her to come to him.

The way his chosen ones always came to him.

Her white teeth flashed in a mocking smile for the briefest second. Alexius tensed as an eerie shudder crawled along his spine.
He had seen that smile before.

But he’d never seen this woman before. And after tonight, he would never see her again. He thrust the thought, the uncertainty,
the memory
, into the bottomless, foul chasm of his mind.

“Come.” It was a command. Again he offered her his hand.

“Why?” Her voice was breathless from her dance, husky with desire. He fought the urge to go to her. He never had to encourage a woman. Once he made his choice, her capitulation was inevitable.

Despite himself, he took a step toward her. “Because I’ll make it worth your while.”

It wasn’t a lie. But it wasn’t merely her blood he craved this night. He wanted to fuck her, empty himself inside her and hear her scream with pleasure as he indulged his bloodlust. Afterward, all she would recall would be the orgasmic thrill of their encounter. And if she never regained her previous strength or ability to dance like Terpsichore, that was just the way life was.

She clasped her hands around her hair and held the black curls high off her neck. He froze, his thoughts colliding. Her gesture was horrifically familiar, as if he’d witnessed her doing it a thousand times.

“What makes you think you can afford me?” Her hands dropped to her sides and her hair tumbled over her shoulders. Her eyes never left his.

For the first time in centuries the core essence of who he was,
what
he was, fractured with doubt. His victims never questioned him. Women never denied him. Yet this black-haired seductress dared both.

He laughed, the sound shocking to his ears. When was the last time he’d laughed aloud?

“You’re welcome to it.” He offered her a sardonic bow, reminiscent of the dandies who flocked to the assemblies. She didn’t respond in like manner. Instead, she flicked the shadowy violinist a sideways glance.

Her pimp, no doubt. If he interfered, he would die. Alexius shot him a damning glare, a warning to keep his distance. The shadow didn’t move.

“Does your soul mean so little to you?” Her voice was even, but he heard the undercurrent of censure, buried so deep within her words, he knew she was unaware her true feelings had escaped.

A thread of intrigue tangled with his amusement, inexplicably heightening his desire. He couldn’t recall ever conversing intelligently with his intended sustenance before.

“I’m sure you’ll make the sacrifice worthwhile.” Except he had no soul to offer. He was sure a few guineas slipped into her tempting cleavage would satisfy her instead.

Again she flashed her smile. Again the sense of deja vu slithered through the void where his soul had once resided.

“Oh I’m sure I will.” Promise threaded through every sultry word and finally she stepped toward him. But still she didn’t take his proffered hand.

“Do you have lodgings close by?” He thought of his luxurious country residence, and for one incomprehensible moment considered taking her there. To allow him time to savor her delights in comfort instead of an anonymous fuck in a dingy hovel.

Madness. What difference did it make where he had her? The conclusion to this evening was already in motion.

“No.” She sounded amused by his question, as though she found his fastidiousness quaint. “Don’t you have a carriage?”

“Not tonight.” Damn, but he’d procure a carriage from an unwary traveler if that’s what this exotic creature desired. “Is that your preference?”

She shrugged, diverting his attention to her bare shoulders and exposed cleavage. Her creamy breasts all but spilled from the confines of her bodice. His cock jerked at the thought of ripping the narrow velvet ribbons that barely covered her modesty and exposing her to his gaze.

Velvet ribbons.
For the first time he noticed the softness of her gown, the richness of the fabric. The material was fit for a duchess, yet this woman wore them in such a manner as befit the most common of whores.

The strangeness fueled his lust. It had been forever since a woman had caused him to think beyond how her blood or cunt might taste.

“I have no preference.”

Her voice was melodic, pleasing to his ear. Not the voice of poverty or despair, but one that could grace the most refined society ball.

Perhaps she was a courtesan, fallen on hard times.

With a ripple of disbelief, he realized she still hadn’t taken his hand.

“Then allow me to find us suitable accommodation.” Without waiting for her answer, he took the final steps toward her and curled his fingers around her upper arm.

Her heated skin branded his palm and lust sizzled through his veins. His balls tightened and his cock hardened beyond all sanity. The flickering light danced over her face, her parted lips, and her eyes were dark pools of mystery. But still she made no move to touch him.

“What game are you playing?” His voice rasped, scarcely recognizable. “Do you require payment before you deliver?”

He slid his other hand around her neck. The cool silk of her hair caressed his knuckles, as the tips of his fingers caressed her tender flesh. He inhaled her fresh, clean scent, rose petals and raindrops and something else, something he had never before encountered. Something dark and dangerous and so violently arousing, it momentarily obliterated the overwhelming lure of her luscious blood.

She tilted her head, exposing the pale column of her throat to his ravening gaze. Without conscious thought, he lowered his head, and drifted his mouth across her tempting skin. He could feel the frantic beat of her pulse vibrating against his lips, against the tip of his searching tongue. His fangs pierced his gums, aching with need and want and rising desperation, yet unaccountably, he held back.

Back in the Habit by Alice Loweecey
Hyena by Jude Angelini
The Widow Finds Love (Mail Order Bride Series) by Susan Leigh Carlton
Lady Susan Plays the Game by Janet Todd
Sueño del Fevre by George R.R. Martin
Two Scents' Worth: A Wolf Rampant spinoff serial (Bloodling Serial Book 3) by Easterling, Aimee
The Last Supper: And Other Stories by Howard Fast
The Party by Christopher Pike
My Sister, My Love by Oates, Joyce Carol
A Mistletoe Kiss by Katie Flynn
Our partner