Read Blue Bells of Scotland: Book One of the Blue Bells Trilogy Online

Blue Bells of Scotland: Book One of the Blue Bells Trilogy 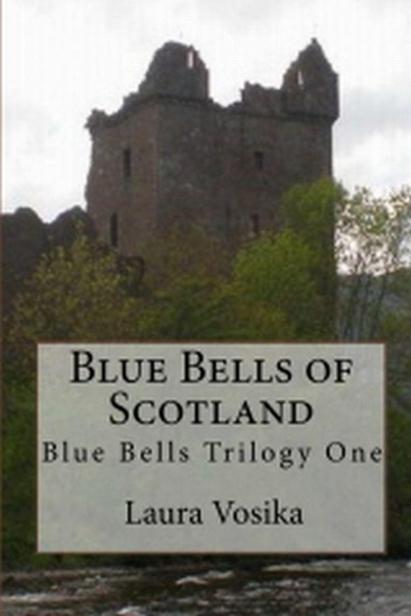 What readers say about
Blue Bells of Scotland
:

a thoroughly engrossing time travel story that promises to continue as vividly as it started.

Vosika spins a captivating tale. The pacing flows from a measured cadence...and builds to a climatic crescendo reminiscent of Ravel's Bolero. I become invested in the characters. Write faster, Laura. I want to read more.
—
Joan Szechtman, author,
This Time

Ms. Vosika wove these aspects together in a very masterful way that kept me spellbound. I could hardly put it down.
—
Thea Nillson, author,
A Shunned Man

Ms. Vosika spins the web so well you are a part of all the action. If you love history, romance, music and the believable unbelievable...this book is for you. I couldn't put it down until I closed the cover on an ending I never expected.
—
Kat Yares, author,
Journeys Into the Velvet Darkness

some of the best writing it has been my pleasure to read.…

a very exciting tale
....
—
Ross Tarry, author,
Eye of the Serpent
, and other mysteries

I love books on time travel, but this is so much more. The characters come to life in your heart and mind
.
—J
eryl Struble, singer/songwriter,
Journey to Joy

One of the most intriguing stories of Scottish history I have ever read. Riveting!

This book is available in print at www.bluebellstrilogy.com

All rights reserved. No portion of this book may be reproduced, stored in retrieval system, or transmitted in any form or by any means—electronic, mechanical, photocopy, recording, scanning, or other—except for brief quotations in reviews or articles, without the prior written permission of the author and publisher.

This is a work of fiction. Names, characters, places, and incidents are either products of the author's imagination or used fictitiously. All characters are fictional, and any similarity to people living or dead is purely coincidental.

This ebook is licensed for your personal enjoyment only. This ebook may not be re-sold or given away to other people. If you would like to share this book with another person, please purchase an additional copy for each person. Thank you for respecting the hard work of this author.

Writing a book, despite the name on the cover, involves many people. I would like to thank Andrew for his support in seeing that I have the time to write, buying me a multitude of books and DVDs on all things Scotland and medieval, driving me all over the Highlands and following me up and down the hills Shawn, Allene, and Niall would have climbed.

My thanks and love to my children for their patience: Karl, Caoimhe, Kian, Cara, Michael, Matthew, Connor, Liam, and John Paul. They have listened to many a story of Robert the Bruce, Bannockburn, and Scottish and medieval history.

My thanks and appreciation to the Night Writers of Maple Grove who have been both enthusiastic and full of good advice: Ross, Judy, Genny, Judd, Jack, Janet, Jerry, Lyn, Larry, Linda, Brin, Inna, Will, Stephanie, and Sue. You are all a great blessing in my life.

Thank you to my parents and sister Linda for making my trip to Scotland possible.

My thanks to the many helpful people we met in Scotland, especially Judith Aitkin, Arts Education Manager at Eden Court Theatre and Joe at the Bannockburn Heritage Centre, both of whom took a great deal of time to show me around and answer my many questions. I was impressed by their knowledge, friendliness, and willingness to take the time to help a stranger, and by Joe's obvious love of his country's history.

My thanks to Chris Baty and National Novel Writing Month, www.nanowrimo.org for bringing sky-castles down to earth for so many, and to Cindy, Jeryl, Pam, Courtney, Kim, and Rita for their encouragement and support.

As a musician and American, I learned many new things in researching
Blue Bells of Scotland.
I developed an incredible appreciation for Robert the Bruce and James Douglas, and their loyal friends and followers, and the amazing feat they accomplished at the Battle of Bannockburn against 'impossible' odds. I hope the reader will come away from this story with a similar appreciation for these great men. I have enjoyed every minute of research and have kept the events of the
Blue Bells Trilogy
as historically accurate as possible. 700 years later, sources often conflict, so at times, I’ve had to choose between sources and guess which is most reliable.

The time slips Aaron describes to Niall have been recounted in several sources. The story of the boys in Kersey, in particular, is told in Andrew MacKenzie's book
Adventures in Time: Encounters with the Past.

"Shawn means
self
and Kleiner means
centered
!" His girlfriend, an English major, flung it at him as an insult. Shawn plucked it from midair, polished it off, and, grinning, wore it as a badge of honor.

But Shawn surpassed mere self-centeredness. He strove also for selfishness, self-importance, and self-satisfaction. He was the center of his own existence and, the problem was, of many others', too.

His audition for second trombone, a month before completing his music degree, was legend.

He swaggered into the reception room and leaned over the secretary's desk, smiling his infectious smile and complimenting her eyes. In minutes, he had a date with her. She called her fiance to cancel dinner with his parents. Postponed it indefinitely. He drew a rose from the vase on her desk, brushed it across her lips, and took it, and her longing gaze, with him.

Strutting into the warm-up area, he sized up forty-five world-class trombonists. His eyes fell on the lone woman. He trailed the rose along her cheek and flipped his card up between two fingers. "Call me," he mouthed. Her eyes melted.

When he pulled out his trombone, seventeen musicians stopped playing to stare. Shawn had that affect. He stood six feet, strongly built. Dark chestnut hair brushed his shoulders. Deep amber eyes sparkled with confidence as he leisurely scanned his competition.

Satisfied, he drew in a deep breath. Thirteen more stopped playing. He blew one long, golden note, and fourteen more lowered their instruments. He dipped warning eyebrows at the lone holdout still prattling off scales. The man dropped his instrument and looked away.

Now it was only Shawn.

He warmed up with the triplet section of
Blue Bells of Scotland
. He played it twice as fast as anyone ever had, skipping over the hardest parts like a mountain stream bubbling downhill. His
Russian Easter
thundered out every gravitas Rimsky-Korsakov had intended. A little bluesy
Body and Soul
just for fun, at which an older gentlemen in the back of the room wiped the corner of his eye.

The door burst open. The conductor charged through, yelling for a contract. The principal trombonist dropped to second chair and Shawn ruled the trombone section.

"Are you
crazy?"
the concertmaster demanded, when he heard. "All we needed was a second trombone. What have you done?"

"Vision!" Conrad Schmitz pushed his face right back into the concertmaster's. "Charisma. Flair."

"It's just a trombone. Oompah, oompah, and the occasional
Valkyrie
. It's only a step above bassoon for comedic value. What were you thinking?"

"When you meet him, you'll understand! He has magnetism. Power! He could turn a tin whistle into stardom. He can do for us what James Galway did for flute, what Yo-Yo Ma did for cello. He can give us success we've only dreamed of till now!"

Within a week, inspired by Conrad's vision, the music committee had re-engineered the season's program to feature Shawn, the new centerpiece of a sagging orchestra, the man who would lead them to a brighter future.

Shawn celebrated his victory as he celebrated most days of his life: with self indulgence. He took the receptionist for steak and lobster at a restaurant heavy with silver and crystal. The chef treated him. They had fine wine, and a night at the Hilton, between red silk sheets. And the next week, with a carefree grin, Shawn allowed the orchestra to begin accompanying him on his rise to fame and wealth.

Niall gripped white knuckles in the pony's mane, leaning tight over its neck. Its hooves flashed over the moonlit moor. Beside him, raced his nephew Gilbert and best friend Iohn. Half the MacDougall clan thundered after them. "Ahead!" Iohn shouted. Two MacDougalls burst from the rise before Niall. One swung at Gilbert, doubling him over, howling. Niall whipped his sword from his back. A swipe from a MacDougall's sword knocked it from his hand. The man on his left, teeth bared in victory, grabbed Niall's reins. Niall's eyes flashed to Iohn. He, too, grinned.

Iohn's sword spun through the air, flashing sparks of moonlight. It jolted into Niall's outstretched hand, jarring his arm clear up to his shoulder. He swung at the first man, knocking him senseless, even as he tore the dirk from his belt and plunged it into the other man's chest. The man's eyes flashed wide. He dropped the reins, scrabbling at his breast.

"Go!" Niall shouted at Iohn. "Help Gil." Iohn obeyed his future laird. Niall yanked his knife. The man slid off the blade, clutching his chest, and dropped to his knees. Niall swallowed bile. But his duty to the Laird included retrieving their cattle from the thieving MacDougalls. "For Gil," he whispered, shoving the dirk in his belt. Still, he made the sign of the cross over the dying man.

Hooves rumbled behind him. MacDougalls spilled down the steep slope, onto the moor. It was Niall's job to lead them away from the cattle. With a last glance at the bodies, he kicked his mount. The pony skimmed the spongy field, shooting over clumps of heather. Niall's enemies lost ground steadily. He rose in his stirrups, driving the pony hard, grinning, and shouted over his shoulder, "Ye'll no forget the night Niall Campbell retrieved his cattle!"

And he flipped his tunic up at them, baring everything.

The thin whine of an arrow streaked across the moor.

Blinding lights, pulsing drums—the timpani deep and dark—sent pulses through his body. Shawn's eyes closed, feeling the music, the slide flowing, moving, as if on its own. Behind him, he felt, before he heard, the orchestra move into the final chord: just the violins at first, almost imperceptible; a swell as violas joined, then cellos; a low rumble of basses; a soft trill of flutes, growing; more woodwinds. Shawn gulped air and poured it, liquid gold, into the instrument. Up in the balconies flanking the stage, a rank of pipers added their sound. Their drone hummed through his body.

The conductor's arms slashed down. All sound stopped.

Shawn's eyes opened. He lowered the trombone slowly, pushed his long, dark hair from his eyes, and surveyed his minions in the crowd. Beyond the glare of lights, a sea of dark shapes heaved upward. Applause erupted into the void, pouring over him like the warm breath of life. His face broke into a huge grin. Energy surged through him as the final concert of his Scottish tour ended to thundering acclaim. A girl screamed, "Shawn, I love you, I looove you!"

The Cured by Gould, Deirdre
Her Forbidden Marine (Hearts Ablaze: Men in Uniform Book 2) by Jameison, Makenna
Hunting Season by Mirta Ojito
Nine Layers of Sky by Liz Williams
The Ex Games 3 by J. S. Cooper, Helen Cooper
3 of a Kind by Rohan Gavin
British Manor Murder by Leslie Meier
Dancing Towards the Blade and Other Stories by Mark Billingham
Love Blind by C. Desir
A Calculus of Angels by Keyes, J. Gregory
Our partner