Read Bond 10 - The Spy Who Loved Me Online 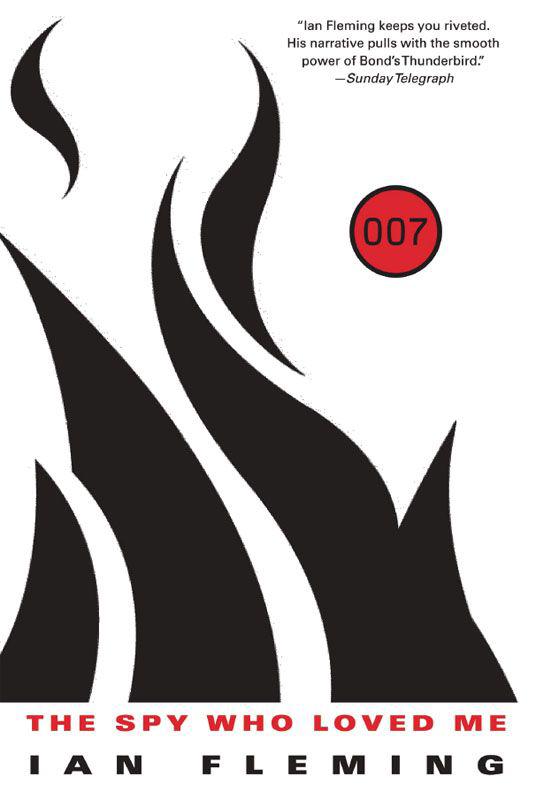 “Ruthlessly, fashionably efficient in both love and war.”—
The Times

“Ian Fleming writes with a kind of pushing, bloodcurdling elegance. His thrillers are models of fastidious murder.”—
New York Times

“Mr. Fleming is splendid; he stops at nothing.”—
New Statesman

“One of the most cunningly synthesised heroes in crime-fiction.”—
Observer

From Russia With Love

For Your Eyes Only

The Spy Who Loved Me

On Her Majesty's Secret Service

You Only Live Twice

The Man with the Golden Gun

Octopussy
and
The Living Daylights

THE SPY WHO LOVED ME © Ian Fleming Publications Ltd 1962

Ian Fleming has asserted his right under the Copyright, Designs and Patents Act 1988 to be identified as the author of this work.

First published in Great Britain by Jonathan Cape in 1962.

And I had run a very long way indeed – almost, exaggerating a bit, halfway round the world. In fact, I had come all the way from London to The Dreamy Pines Motor Court which is ten miles west of Lake George, the famous American tourist resort in the Adirondacks – that vast expanse of mountains, lakes and pine forests which forms most of the northern territory of New York State. I had started on September the first, and it was now Friday the thirteenth of October. When I had left, the grimy little row of domesticated maples in my square had been green, or as green as any tree can be in London in August. Now, in the billion-strong army of pine trees that marched away northwards towards the Canadian border, the real, wild maples flamed here and there like shrapnel-bursts. And I felt that I, or at any rate my skin, had changed just as much – from the grimy sallowness that had been the badge of my London life to the snap and colour and sparkle of living out of doors and going to bed early and all those other dear dull things that had been part of my life in Quebec before it was decided that I must go to England and learn to be a ‘lady’. Very unfashionable, of course, this cherry-ripe, strength-through-joy complexion, and I had even stopped using lipstick and nail varnish, but to me it had been like sloughing off a borrowed skin and getting back into my own, and I was childishly happy and pleased with myself whenever I looked in the mirror (that’s another thing – I’ll never say ‘looking-glass’ again; I just don’t have to any more) and found myself not wanting to paint a different face over my own. I’m not being smug about this. I was just running away from the person I’d been for the past five years. I wasn’t particularly pleased with the person I was now, but I had hated and despised the other one, and I was glad to be rid of her face.

Station WOKO (they might have dreamed up a grander call-sign!) in Albany, the capital of New York State and about fifty miles due south of where I was, announced that it was six o’clock. The weather report that followed included a storm warning with gale-force winds. The storm was moving down from the north and would hit Albany around eight p.m. That meant that I would be having a noisy night. I didn’t mind. Storms don’t frighten me, and although the nearest living soul, as far as I knew, was ten miles away up the not very good secondary road to Lake George, the thought of the pines that would soon be thrashing outside, the thunder and lightning and rain, made me already feel snug and warm and protected in anticipation. And alone! But above all alone! ‘Loneliness becomes a lover, solitude a darling sin.’ Where had I read that? Who had written it? It was so exactly the way I felt, the way that, as a child, I had always felt until I had forced myself to ‘get into the swim’, ‘be one of the crowd’–a good sort, on the ball, hep. And what a hash I had made of ‘togetherness’! I shrugged the memory of failure away. Everyone doesn’t have to live in a heap. Painters, writers, musicians are lonely people. So are statesmen and admirals and generals. But then, I added to be fair, so are criminals and lunatics. Let’s just say, not to be too flattering, that true individuals are lonely. It’s not a virtue, the reverse if anything. One ought to share and communicate if one is to be a useful member of the tribe. The fact that I was so much happier when I was alone was surely the sign of a faulty, a neurotic character. I had said this so often to myself in the past five years that now, that evening, I just shrugged my shoulders and, hugging my solitude to me, walked across the big lobby to the door and went out to have a last look at the evening.

I hate pine trees. They are dark and stand very still and you can’t shelter under them or climb them. They are very dirty, with a most un-treelike black dirt, and if you get this dirt mixed with their resin they make you really filthy. I find their jagged shapes vaguely inimical, and the way they mass so closely together gives me the impression of an army of spears barring my passage. The only good thing about them is their smell, and, when I can get hold of it, I use pine-needle essence in my bath. Here, in the Adirondacks, the endless vista of pine trees was positively sickening. They clothe every square yard of earth in the valleys and climb up to the top of every mountain so that the impression is of a spiky carpet spread to the horizon–an endless vista of rather stupid-looking green pyramids waiting to be cut down for matches and coat-hangers and copies of the
New York Times
.

Love & Freedom by Sue Moorcroft
Pagan's Vows by Catherine Jinks
Enigma of the Soul - Book 1 - Pieces by LionHeart, Cassidy
Shear Trouble by Elizabeth Craig
The Fire's Center by Shannon Farrell
The Doctor's Rebel Knight by Melanie Milburne
Finding Home by Georgia Beers
Heaven and Hell (Beautiful Beings, #2) by Gow, Kailin
Unlocking the Spell by Baker, E. D.
The Sound of Us by Poston, Ashley
Our partner