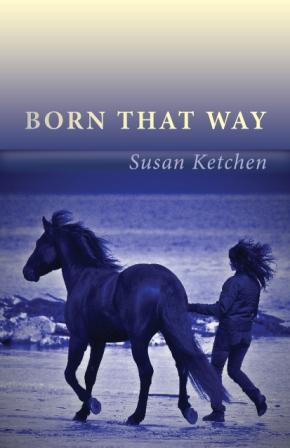 Copyright Â© 2009 by Susan Ketchen. ALL RIGHTS RESERVED. No part of this publication may be reproduced, stored in a retrieval system, or transmitted, in any form or by any means, without prior written permission of the publisher, except by a reviewer who may quote brief passages in a review to be printed in a newspaper or magazine or broadcast on radio or television; or, in the case of photocopying or other reprographic copying, a licence from ACCESS COPYRIGHT, 6 Adelaide Street East, Suite 900, Toronto, Ontario M5C 1H6.

We gratefully acknowledge the financial support of the Canada Council for the Arts, the British Columbia Arts Council through the BC Ministry of Tourism, Small Business and Culture, and the Government of Canada through the Book Publishing Industry Development Program, for our publishing activities.

And especially to my parents

who have been waiting a very long time

I am galloping flat-out across a field of tall grass on the back of a horse I have never seen before. I am so full of excitement and happiness that my chest could burst. The horse's ears are perked and he requires no urging to keep the pace, and that's just as well because I have no reins, no bridle, no saddle. My fingers clutch deep in a thick wavy mane and I am out of control but at the same time so secure that even if I let go I know I won't fall off. I'll be fine.

There must be a farm aheadâthrough the trees I hear a ringing sound.

The horse dissolves beneath me.

The alarm clock rings from my bedside table. My fingers clutch my blankets.

Ahead of me is not an unexplored forest, but another day of school. We get our math tests back today. That will be the peak of my excitement.

“I dreamt I was riding again,” I tell Mom at breakfast.

“That's nice, Honey.” She is eating a piece of dry toast with her tea, and reading.

Because she's not paying attention, I put an extra spoonful of brown sugar on my porridge. Then I say, “I thought we weren't supposed to read magazines at the table.”

“This isn't a magazine, Sweetie. It's a new professional journal about my work. See?” She points to the title on the cover and sounds it out, as though the words are too long for me, as though I'm back in elementary school. “
Psychoanalyst Review
,” she says.

I'm feeling kind of insulted, even though I know I'm not the world's best speller. But I decide to brush it off with a joke. “Oh, so that's how you spell it,” I say. “I always thought you were a Cycle Analyst.”

She doesn't laugh, though I hear a snort from Dad. Mom frowns. “There's an article on eating disorders,” she says. “And I'm meeting a client this morning who has bulimia. But you're right, Sylvie, I shouldn't be reading at the table. It sets a bad example.” She sighs and looks sad. I hate it when she looks sad, but decide against another joke.

She pats my hand. “Are you sure?” she asks, but she's reading again before I have a chance to answer.

I add another spoonful of sugar then dribble on the milk. The porridge is a floating island surrounded by a beach of golden brown sand. When I have a horse one day I will canter along a beach like this and plunge in and out of the breaking waves. “I was galloping and we jumped a gigantic stone wall and I stayed on,” I say.

“Quietâthe stock market report is on,” says Dad, adjusting the volume on the radio. Dad loves hearing the morning market news on the radio even though he's already spent half an hour reading updates on the computer. I listen to the commodities report with him. Mom notices all the extra sugar in my bowl and is about to say something, but Dad shushes her, so she frowns at me and then goes back to her journal.

After breakfast I ride my bike to school. I take the long way around the outer edge of the subdivision and then turn onto Willow Bend Road. I'm not in any sort of hurry to arrive at school. I'm kind of worried about the math test as this is my weakest subject. In everything else I can usually earn B's, but math is something elseâI have to work extra hard and even then sometimes I barely pass.

School is harder this year than it was last year, and my math teacher, Mr. Brumby, doesn't like me. Plus, I was popular last year, but that was before The Twins arrived from Manitoba. It's not as though they were from somewhere special like Mars or Vienna, and it's not as though it's such a great accomplishment to be a twin, but everyone treats them as though they're special and now I'm nothing. They're not even identical.

Last year after school Logan Losino asked if there was someone he could beat up for me. Last year there was always someone who wanted to hang out with me. Now there's a line-up to hang out with Amber and Topaz. Logan Losino has a crush on Amber. He punched Jerry Jinzhou for her and she was so happy about it she tried to give him the ten dollars she was supposed to donate to the school band travel fund, but Logan wouldn't take it. He said accepting money would make him a professional hit man, which might not look good when he tries out for pro baseball.

Willow Bend Road takes a big loop through some old farmland before it ends up back on the main road about a block from my school. I'm coming down the hill at the top of the loop when the bay horse sees me and trots to the fence to meet me. I know she's a bay because that's what
The Horse Encyclopedia
calls horses that are brown with black manes and tails. I sit on the top rail at the gateway and feed her carrot sticks from my lunch bag. Mom is happy that I want carrot sticks instead of Cheezies or Oreos; she says that if I eat carrot sticks I can reduce my risk of developing type one diabetes. She doesn't know I feed them to the horse. I don't care much about getting enough fiber. What I want is lots of protein to help me grow faster.

I have named the horse Nickers. She is very sweet. Today I have decided to ride her.

I hang my backpack on the post and unzip the main compartment. I have to dig around in the bottom to find my old skipping rope, hidden where no one can see itâI am teased enough without Amber finding it and thinking I still play skipping.

Nickers waits patiently beside me. I know I can't get the rope around her head like a real halter or bridle, and I don't have a bit anyway. So I loop it around the base of her neck and put a knot in it. Then I stand on the middle gate rail, lift my right leg over her back and push myself aboard.

Nickers just stands there. I'm a long way off the ground. I feel higher than when I was sitting on the top of the gate, even though I'm not.

I hang onto my skipping rope and wiggle my bum on her back.

Nickers stands there some more.

And that's enough for me.

I slide off, untie my skipping rope and give her another piece of carrot from my pocket. “Thanks, Nickers,” I say. “That's a good start! We'll do some more later when I'm not so nervous.”

I'm not sure about telling her I'm nervous. Mom says honesty is always the best policy, but Dad says never let an animal see your fear. Maybe Mom is talking about people and Dad is talking about dogs. Neither of them knows about horses. They don't know where I got my interest in horses. All I know is I was born this way.

I bike home the long way from school too (C+ in math. Not bad.). But when I see Nickers I don't feel brave enough to try riding her again, so I give her the last piece of carrot and go home.

After dinner I pretend to be doing my homework in my room but really I'm reading
The United States Pony Club Manual of Horsemanship
that I found at the thrift store. I need to learn how to ask Nickers to walk when I'm riding her. The manual says I'm supposed to squeeze with my calves and push with my seat. I put a couple of pillows between my legs to practice and that is when Mom comes in. She doesn't even knock.

She backs out of my room, closes the door, opens it and comes in again.

“How was school?” she asks.

She's looking at the Pony Club manual open on my desk. She slips a finger under the spine and lifts it, like she's looking for something underneath it. Something even worse. She has that non-look on her face she uses when she's fulfilling some serious parental responsibility or when she's talking to one of her patients on the phone. What does she think I was doing?

She looks at the pillows.

“I was practicing riding,” I tell her.

She sits on my bed. I know she's relieved even though she's trying not to show it. “Of course,” she says.

I nod several times. Whatever she thinks I was doing, I don't want to hear about it.

She says, “And if it was something else, you would tell me and we would talk about it.”

“Something else?” I say, which is a mistakeâI see it as soon as she folds her hands in her lap and takes a deep breath. So quickly I add, “Of course, I know I can always talk to you, Mom.”

“About anything,” she says.

“I know that puberty is a challenging developmental stage,” she says.

“MomâI know.” I try not to sound too exasperated with her, but I hate the puberty lecture and will do anything to avoid hearing it again. She has me so prepared with information about changing hormone levels and increased awareness of boys that I have completely lost interest. Not that I have ever had any interest. Boys have never been as interesting to me as horses.

Her eyes sweep slowly around my room. Maybe she is looking for a boy hidden somewhere?

“Well, I'll leave you alone then.”

After she's gone, I lie on the floor and try to distract myself by doing my stretching exercises. I always feel upset after Mom raises the puberty issue because I'm reminded that I'm not there yet. I'm stuck in latency, the previous developmental stage. I am a teenager with the body of an eight-year-old. I don't mind so much that I'm not developed, but being short is a big problem for me. That's why I stretch, any chance I get. But what I really don't understand is why my parents don't say anything. It's as though my mom is pretending I'm a normal, struggling teenager while my dad pretends I'm still a child. No wonder I feel confused all the time.