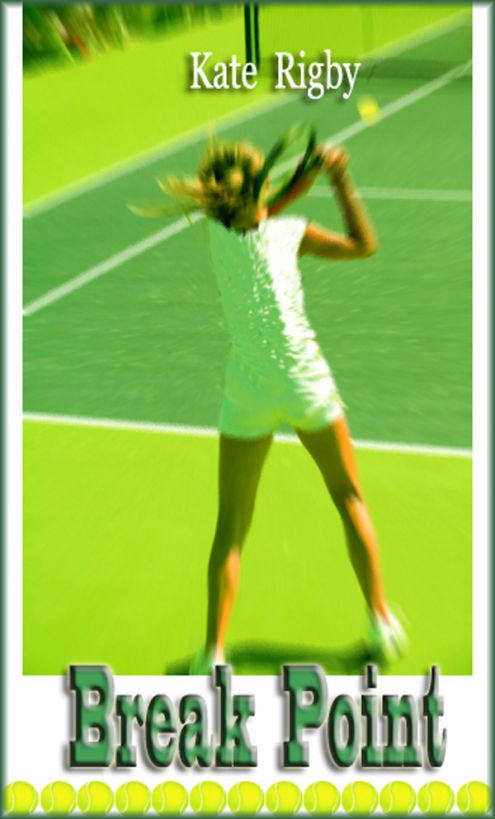 This ebook is
licensed for your personal enjoyment only. This ebook may not be
re-sold or given away to other people. If you would like to share
this book with another person, please purchase an additional copy
for each recipient. If you’re reading this book and did not
purchase it, or it was not purchased for your use only, then please
return to Smashwords and purchase your own copy. Thank you for
respecting the hard work of this author.

All characters
are fictional, and any resemblance to anyone living or dead is
accidental.

Our Elliot's
still snoring away as I polish up my flat black lace-ups and slip
into my dental-white Carewise overall. I've always hated most
uniforms except tennis ones, and the one I wore when I drove the
Number 25 bus.

I comb
through my duck-damp hair and take a last look in the mirror. Well,
Bobbie, you go for it, duck. Well, if June can, so can I. She
fucked off to Copenhagen in April, didn't she? I never dreamt she'd
want to sell Wimble Den. The house had set like bone around us,
like a second body, though she never minded that. Then I gave her
the push she needed when I played away with Babs, and now I feel
sort of wrong-footed. It should be me with the exciting new life.
Instead, here I am clambering over my bulging boxes in Elliot's
spare room where somewhere, stuffed deep down in a dark cardboard
crevice, is that fluffy lime ball, the one I stole from Wimbledon
that time and gave to June. Like a wedding ring it was to her, once
upon a time.
What's mine isn't yours any
more, Bobbie. So take the bloody thing back!
She should have punched me lights out. I would have! But
that's not June's style. Nor is it Tash's. (She's Babses
chick.)

A quick
blast of the hairdryer and I'm ready for the off. Tra Elliot! Wish
me luck! He groans.
Well, it is only ten
past eight.

I'm
headed for me new lady's house in Belvedere Road. Hazel from
Carewise phoned me up yesterday, First Monday. "Got a job that's
right up your street, Bobbie," she said. She promised me the job
was mornings only, back by lunch time. In time for
Wimbledon
.

It was all
June’s fault. She got me hooked on the thunk of tennis balls that
soothe your head for two long weeks and that last wedge of sunlight
you get on Centre Court, eight o'clock shaped.

Now
Wimbledon’s just a habit that's hard to kick. It’s been tied up
with June for so long, it seems wrong her not being here. This is
our time of year, she always said. She always said Wimbledon was a
season, like Christmas, except Christmas is really only one day
when you think about it. Wimbledon a whole fortnight.

Belvedere Road
where Gwen McMahon lives is about fifteen minutes walk from
Elliot's. Number Nine has some kind of shrub growing up over the
downstairs window, like hair in your eye, and I've got the
butterflies in me as I walk up the path. I'll have to start talking
proper around Gwen. Doesn't, not don't. In the, not int. My, not
me. That's just lazy Chesterfield talk. Was, not were. But Gwen.
She sounds a right dear, doesn't she? But the woman who opens the
front door of Number Nine is big and hefty with puffy bits round
her eyes, chin and ankles. She's got a crimson face, and she's
short on breath, and her breasts have rolled into one great pillow
of bosom which sits on her stomach under her pale blue
dress.

"You must be
Betty," she says, leaning over her stick on the chequered porch
floor. Black and white check. "How nice of you to come. "Come in,
Betty, and I'll -"

"Bobbie? Oh, I
do beg your pardon. Is that short for Roberta?"

"May I call
you Robina?"

And I want to
say to her, You'd like June then. There's a lot of bigness about
June. Hips, stout legs. A big sturdy tree to climb over. Big June,
but not overweight. It's her frame. Her big moon face. Her big
chest that comes out from her neck, and if you heard the power when
she sings, just like Alison Moyet, then you'd know how important a
big roomy chest like that is. And her tits are the biggest.
Dark-capped, cor. I used to think of her nipples as dark plasters
that you could peel off, gushing gallons of milk. Me? I'd produce a
dribble, if that. I was one of them flat-chested twelve- year-olds
who stuff their vests and bras with all sorts.

Gwen shows me
through to the sitting room. Her hair’s like hay, sort of yellowy
grey with a natural wave, and quite long for an old
person.

"Now, Betty,
if you would just arrange the two cushions at the back of my chair
... thank you. If you would just help me into it. There. That's
better." Her eyes are bold blue and full of extra matter. "And
perhaps you'd be so kind as to make me my second cup of tea of the
morning, would you?"

She huffs and
puffs as she settles in her chair and it's just struck me how dark
the room is. It's a summer's day and she's got the light on. It's
all this dark furniture. Bookcases with latticed glass doors,
sideboards with fancy handles, dark oak table and chairs. Any light
coming in is first filtered through that forest of firs in the back
garden, and then again through those stained glass panels on the
windows.

"Now then. My
neighbour Mrs Parrott has been making me my first cup at seven
o'clock before she goes to work. I can get myself up, you
understand - it just takes me that much longer."

She tells me
how she lives more or less downstairs since she had the dining room
converted into a bedroom. "I've got all I could possibly want with
the washroom and toilet over the way. Except the bath. So I don't
have one of those every day." She stops to stroke her whiskery
chin. "Now I'll give you a key, Betty, and if you would be able to
start at eight o'clock and serve my breakfast at half past eight,
that would be a most civilized hour."

The
grandfather clock chimes nine as I do some of the breakfast dishes
while waiting for the kettle.

I'm carrying
in the tea when Gwen says, "You live in Newminster the agency told
me. You have a house of your own there, do you? Or do you
rent?"

"I'm living at
my brother's flat."

"Still, it's
nice to have family who are close."

"Yeah. Though
I've got to be out of Elliot's soon. He needs to let out the spare
room."

"Oh yeah," I
say, pouring the tea. I could kick myself, I really could. Time was
when I'd have said, No, but I've got a right natty girlfriend,
though that's not true no more neither. But you get to learn, over
the years, that it makes life easier. Old people like normality.
Shit, this is June territory this. Or maybe June's being up front
these days, out there in Denmark, because June's the one making big
changes now, though she fought against it long enough. "You're
stuck int past, duck," I was always telling her. And she used to
say, "So what? I like the past, Bobbie." She said I'd lost a lot of
mine. The bits she loved. She said my Chesterfield accent had
faded. That was one of the things that she first fell for when we
were eighteen.

"And then if
you wouldn't mind dusting and hoovering when you get back. Oh, I'm
so glad we get on well, Betty. ROBERTA."

"Now then, I
may need the odd help with letters and bills on some days. My hands
don't have the same flexibility." She looks down at them with faint
disgust.

"About noon.
Anne comes in the afternoons." There's an emotion in her voice when
she says Anne's name, a bit reverential. "Anne comes at three
o'clock, earlier if it's nice, and we go out in her car or for a
little walk to my father's memorial seat on the cliff top
overlooking the bay."

"Or if it's
dull, then we might play a game in the sitting room perhaps. Oh,
she is good to me, Anne."

"Does she come
weekends too?"

"Most
weekends, oh yes. If not, then I fall back on the goodwill of
Parrott."

"Oh good," she
says. "Now, there should be a bag of cardigans and dresses in my
wardrobe for things that can't go in the machine."

I go into her
bedroom which has dingy patterned wallpaper. I open her wardrobe
and find the bag under the small row of dresses and suits and
cardigans and wonder why it is that old people always go in for the
same colours and styles.

The soap
flakes look like little diamonds of confetti on the stainless steel
base of the kitchen sink which gets me thinking of weddings.
Unconventional weddings. Like the one Gordon and Colin were all set
to have in Denmark last year, because it's legal there for gay
people, but then they had a big bust-up, though they've kissed and
made up lots since.

I got to know
Gordon through Elliot. They work together. Gordon and Colin have
both got beards. Fungus-faces. Gordon's the balding, thick-set one,
Colin's more wiry and fair, with a sense of the metaphysical. You
see, I can switch whenever I like. I can switch from gritty
northern slang to all clever and academic. I've got one of them
minds me, picks up all sorts of bits and bobs along the way, most
of it rubbish, but now and again you get a few treasures that are
yours for keeps. Anyway, me and Gordon, we once kissed before he
had his beard, just to remind ourselves of what it was like with
the opposite sex. I felt his whiskers scratching like an
emery-board against me chin. In fact it was Gordon and Colin, with
all their Denmark talk, who must have got June interested in moving
out there.

I wash and
rinse and squeeze and hang out and the clock chimes another
quarter, and it's time for me to go to the Arnecombe shops on the
main road. My first port of call is the tiny supermarket, and then
the deli, and I buy tins of this and that, peeled potatoes and
coleslaw and peas and tongue and tuna. Elderly food. I buy thin
slices of fresh ham in tracing paper untouched by human hands,
well, only plastic-gloved hands, and freshly-baked white bread with
a dusting of flour on top, and green bog roll, and I think about
the time, the only time, that me and June made it up to Wimbledon.
We had tickets so we didn't have to queue, we sent off for them
well in advance and ticked boxes saying which week and which courts
we wanted tickets for, and we were lucky, we got tickets for the
Ladies' Quarter-Finals.

"Oh, you are a
good girl, Anne," says Gwen on my return, and as I'm unpacking she
adds, "I've been thinking. I may be able to help with finding you
somewhere to live."

"Oh yeah?" I
notice her skin which is all spotted and patterned, like the faded
wallpaper in her bedroom.

"Leave it with
me," she says, her eyes on me. Maybe she's looking at my skin which
is the smooth and plain sort, like paint, the way younger people
have it. "I'll see what I can do."