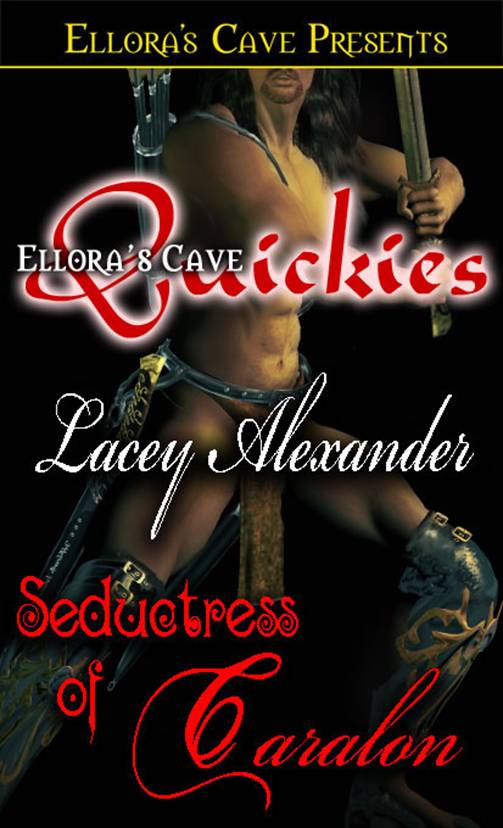 An
Ellora’s
Cave Publication, May 2005

The following material contains graphic sexual content meant for mature readers. Seductress of
Caralon
has been rated E–
rotic
by a minimum of three independent reviewers.

E-
rotic
love scenes are explicit, leave nothing to the imagination, and are high in volume per the overall word count. In addition, some E-rated titles might contain fantasy material that some readers find objectionable, such as bondage, submission, same sex encounters, forced seductions, and so forth. E-rated titles are the most graphic titles we carry; it is common, for instance, for an author to use words such as “fucking”, “cock”, “pussy”, and such within their work of literature.

X-
treme
titles differ from E-rated titles only in plot premise and storyline execution. Unlike E-rated titles, stories designated with the letter X tend to contain controversial subject matter not for the faint of heart.

The Brides of
Caralon
series is dedicated

who
first encouraged me to try my hand at erotica,

and
to
Anya
Bast
,

who
gave me a helpful tip or two along the way.

Jalal
concentrated on the wooden tiles arranged in a pyramid before her. She would turn nineteen tomorrow, so word of her bridegroom might come at any time—she must be in practice with the
Maran
tiles that would determine her wedding night rituals.

She looked up as her maid entered the room, the woman’s tunic of thin fur brushing her plump thighs. “Won’t you please tell me now,
Relah
?
Just a hint.”
Some said it was actually better not to do well at the game, that skill with the
Maran
tiles was overrated, but that hardly made sense to
Jalal
.

The stern maid planted her hands at her hips. “You know very well you’ll not find out until after your vows.”

“Did they use the
Maran
tiles back in the Before Times?”

Relah
rolled her eyes. “How would I know?” Then she turned more thoughtful. “But I suspect not. They were very different times, likely very different people.”

Indeed,
Jalal
couldn’t imagine the lives of the people who had inhabited the colossal crumbled cities to the north like
Yorkland
,
Delphia
, and
Washton
, where new, smaller cities now grew from ancient debris. “But surely the people of those times had the same thoughts, feelings, desires we have. So perhaps they did have their own version of—”

“Your father summons you,”
Relah
said.

Jalal
dropped the tile she’d just lifted from the second tier, her eyes going wide as she looked up. Her stomach churned, her breasts turned heavy beneath her silken chemise, and the slit between her thighs tingled with anticipation. This was it—he’d called her before him to announce her bridegroom!

Ten minutes later,
Jalal
entered the grand hall, which looked more run-down than ever before. And to her surprise, no crowd of people had gathered, as she’d expected. Still, her limbs went weak with anxiety as she pulled her best fur wrap about her shoulders and walked up the uneven floor toward her father’s small throne, which he nonetheless had elevated so high that it was necessary to lean her head back to meet his eyes. “You summoned me, Father?”

Osren’s
hair was the warm gray of an alpha wolf’s winter coat, falling about his shoulders, but the crags in his face revealed his years. She was the last of his daughters to reach bride’s age. “Scouts tell me
Enrick
treks this
way, that
even now his forces are weaving through the western mountains.”

“Yes,
Enrick
the Attacker.
It is predicted he will reach the borders of
Myrtell
in only two to three days’ time. As you know, most of my armies are not here, daughter. They are split, guarding my borders to the north and south. We never expected an attack from the mountains. I’m calling on you to detain
Enrick
while my armies are assembled.”

Jalal
blinked. What? This had nothing to do with her nuptials?
Her birthday?
“Me?
How?”

“You must seduce him.”

The words hit her like a physical blow, leaving her breathless for a long, painful moment. She’d known her father was a vulnerable and often desperate ruler, but… “What of my virginity, Father? You’re willing to give up my bride value?” While most women of
Caralon
were free to indulge their sexual urges at will, daughters of the upper classes were kept virgins until they were traded in marriage to whomever their fathers chose. It was a practice
Jalal
despised, but it at least held the likelihood of a life of comfort, a marriage to someone of means.

Her father’s stalwart expression never wavered. “What good is your bride value if
Myrtell
is toppled by
Enrick
?”

Jalal
swallowed nervously. Her father truly expected her to seduce
Enrick
the Attacker? “What could I possibly know about seduction, Father?”

“You need know very little given the ripeness of your breasts, the lushness of your curves, the satin of your skin.”

She sighed. She’d been told of her rare beauty her whole life. Her father had always been fond of saying she’d fetch quite a price. She’d always imagined going to a wealthy young ruler, someone strong and handsome who might even pamper her if she were lucky. But this changed everything.

“I still haven’t the first idea how to pleasure a man. What of my Orientation?” The stirrings in her body these last years had actually made her look forward to the week prior to marriage, which she would spend with a handpicked
Orienter
—a woman who would teach her the ways of sex.

“We haven’t time for a proper Orientation. But Gilda will come to you tonight and try to prepare you for your task. You’ll be taken into the mountains at sunup.” He leaned slightly forward, the lines in his face deepening as he added, “Do not fail me,
Jalal
. Distract
Enrick
with your body long enough for my forces to gather—or you shall answer to me when this is over.”

Maybe you’ll be dead when this is over, she thought, her eyes narrowing on him. She’d always doubted the man held any love for her in his heart, and this proved it. She wanted to spit on him. She wanted to trample his bravado under her feet.

But a woman’s place in
Caralon
was not such that she could ever rule over any man. She had no choice but to do what her father demanded. She had to attempt to learn the ways of seduction,
then
give herself to the feared
Enrick
, a beast of a man who inhabited children’s nightmares—had even once inhabited her nightmares. Like it or not, it seemed, he would soon enter her bed in a whole new manner.

Osren’s
fifth wife, Gilda, swept into
Jalal’s
room, her voluptuous body swathed in the sheer fabric created by the silkworms her father had gathered from near and far. Waterfalls of sea green fell over Gilda’s ample breasts,
then
spilled again from her hips toward the floor, the more intimate curves of her body visible beneath.

She dropped a puddle of blue silk on the bed next to
Jalal
. “Ah yes, just as I thought. The blue looks enchanting with your dark hair. You shall have to let it down, you know.”

Jalal
reached protectively to the silken twine that currently wrapped her long locks in a single row down her back. To let one’s hair down was to announce to all that she was no longer innocent.
Jalal’s
hair had stayed bound her whole life, and of course it would make sense to release it now, if she were to perform a seduction, but she somehow felt almost violated by the suggestion. This was not how she’d intended to lose her well-guarded virginity.

Picking up the scant garments made of the same translucent silk as Gilda’s, she gasped. “They are as see-through as…” She glanced at her stepmother, older than her by only a few years,
then
lowered her eyes. “Well, as yours.” Gilda’s nipples shone like dark flowers through the transparent green fabric.

The Chosen by Chaim Potok
Hunted [The Flash Gold Chronicles] by Lindsay Buroker
In Firm Pursuit by Pamela Samuels-Young
A Catskill Eagle by Robert B. Parker
Death in the City by Kyle Giroux
Los masones by César Vidal
The Genie Within: Your Subconscious Mind by Carpenter, Harry
Moon Over Manifest by Clare Vanderpool
Valentine's Cowboy by Starla Kaye
A Pretty Mouth by Molly Tanzer
Our partner