‘
Craaark!
’ I yell. A pirate’s best friend is a parrot. So I’m on Biddy’s shoulder being her best pirate parrot friend.

‘
Ahh-ha!
’ Biddy snarls. She runs to her cupboard, pulls out a drawer and grabs a hat. It is white with pink flowers. It is not very piratey.

‘
Nah!
’ Biddy says, throwing the hat over her shoulder.

Finally she pulls out the drawer and tips it upside down.

‘
Craaark!
That one!’ I say, pointing with my beak to a purple sun hat.

She puts it on, turns up the edges and runs to her mirror. ‘That’s better,’ Biddy says. ‘Now I need a one-eye.’ She grabs a headband and wraps it around her head so it covers one eye.

‘
Aarrr!
’ she growls into the mirror, holding her dagger up like a fierce pirate. She looks a tiny bit like a pirate.

‘I am the Captain Brigitte Loos,’ she yells into the mirror. ‘The fiercest captain on all of the vast oceans. My best friend is Princess Isolde who lives in a castle on the sheer black cliffs of Bittangabee Bay.

‘I have killed the giant sea dragon and stolen his
treasure
.’ Biddy walks to her new bunk beds. ‘I am taking the treasure in my ship to my friend Princess Isolde.’ She climbs to the top bunk, pulls out her imaginary telescope and looks out to the horizon. 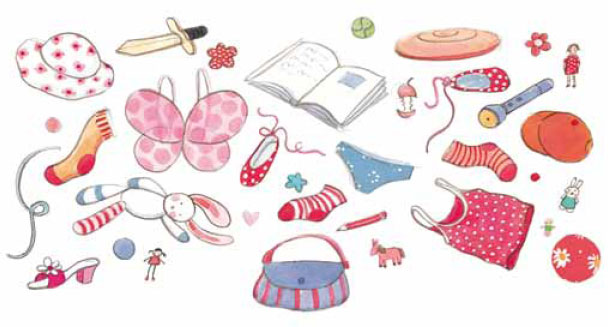 ‘
Land ahoy!
’ I yell in a pirate parrot voice, pointing out the window with my wing.

‘Land ahoy!’ Biddy yells. ‘All hands on deck!’ she tells her pirate crew.

Suddenly the door opens. ‘What is all this noise about?’ Mum asks.

Mum looks into Biddy’s room. She sees the clothes flung about, the drawers upside down, the toys and games all over the floor. ‘Brigid Lucy,’ she says. ‘What are you doing?’ 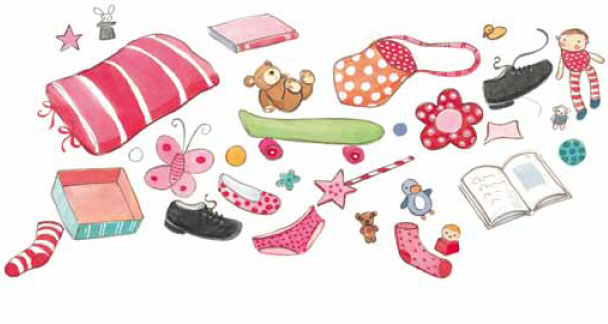 ‘Biddy’s naughty, hey, Mum?’ Miss Getting-All-The-Attention Matilda says. ‘I am not,’ Biddy says. ‘I was just practising to be a best friend pirate.’

‘Brigid, I asked you to play quietly and look what you have done,’ Mum says. ‘This room is a
pigsty
.’

‘It is not a pigsty,’ Biddy says. ‘Pigsties have mud, pigs and…’ and for a moment she can’t think what else pigsties have. Then she remembers, ‘… and they have lots of stinky,
pooie
piggy smells.’

‘Stop-arguing,’ Mum says. And, ‘Clean-up-this-room.’ She tries to bend down to pick up a toy but her belly is too fat. So she puts Ellen on the floor and sits down to pick up the toys and put them in the toy box.

‘Mum,’ Biddy says, jumping down from the top bunk. ‘You’re ruining my games.’ She holds Mum’s hand. ‘Everything is
perfect
. This is the palace garden. Those are the cliffs of Bittangabee Bay. I am a best friend pirate.’

‘Biddy, darling,’ Mum says, ‘when you finish a game you have to put your toys away.’

‘But I’m not finished,’ Biddy says. ‘None of these games are finished.’

‘A game is finished when you stop playing,’ Mum says.

Which is totally
ridiculous
. Games are like stories. They are never finished. But Mum doesn’t care. She changes the subject.

‘You can’t have a friend stay over if your room is messy,’ she says.

‘Of course you can, darling,’ Mum says.

But Biddy ignores me and helps Mum pick up the toys and tidy the room.

‘Matilda, you are not allowed to play with my special things,’ Biddy says, trying to take the wand off her.

‘I am so,’ Matilda screams, snatching the wand behind her back. ‘I’m allowed to help!
Hey, Mum!?
’ really loud.

Even though Ellen can walk and doesn’t need a nappy, she still cries all the time.

Mum cuddles little Ellen and says, ‘Shhh, shhh,’ while she picks up the rest of the toys. Then she stands up and says, ‘Come on, Matilda, time for a rest.’

Mum picks up Matilda in her spare arm and tells Biddy, ‘You are to play
quietly
in your room. You can read. You can have a rest. But you are not to pull your toys out and mess this room up again. Do you understand?’

We can hear Matilda yelling, ‘I’m not even tired.’ And, ‘I’m a big girl,’ all the way down the hall. 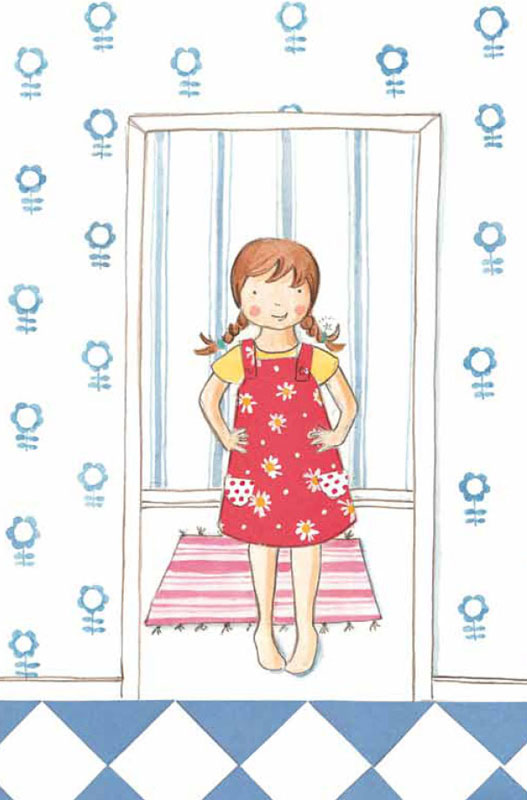 Biddy lies down on her bed and smiles around her sucking thumb. ‘I’m going to have a best friend stay over,’ she whispers.

‘Come on, Biddy. Let’s do something,’ I say. ‘Let’s… Let’s…’ I look around. Up on the shelf is a crystal ball. It used to be a goldfish bowl, but the goldfish ate too much and got sick. It is round and glass just like a crystal ball. I run onto Biddy’s sucking thumb and tell her, ‘Let’s play with the crystal ball. You can be a
wicked wizard
looking into the future.’

‘I will look into the future and find my best girlfriend in this magic crystal ball.’

She gets her torch, a bottle of glitter and her magic silver wand. Then she pulls the sheet off her bed to make a cape and closes the curtains so no sunlight gets through. Her bedroom is as dark as a scoriak cave.

Scoriaks come from the Great Bushland where I come from. They are older than the earth and they know magical Incantation Songs that can turn you into a piece of
infinity
.

But this is not a real scoriak’s cave. So I am not scared. Not one little bit.

I stand on Biddy’s shoulder. She sits down beside the crystal ball and puts the torch in her lap so it shines up under her chin. The light makes her face go old and wrinkly. She waves her silver wand above the bowl, then drops
glitter
to sparkle like lights of electricity above the crystal ball.

‘Brigid Lucy,’ Biddy says, glaring into the bowl with her eyes big and round, ‘you are a princess with long hair and ribbons on her shoes.’

‘An imaginary princess friend?’ I say. ‘That’s a great idea, Biddy. Imaginary friends are the best. They are never boring or horrible.’

There’s a knock at the door. ‘Diddy?’ a voice calls.

‘What you doing?’ she says and opens the door, letting light into the room and blink! the magic crystal ball turns into a
boring
old fish bowl.

It used to be that, in the afternoon, Mum would put Matilda and little Ellen to sleep then do ‘
quality time
’ stuff with me and Biddy. We’d do cooking and painting and talking. But now Mum is ‘
too-tired
’. She lies down ‘for a rest’ too. Sometimes she stays there till Matilda and Ellen wake up. And now she’s asleep when Matilda is awake! 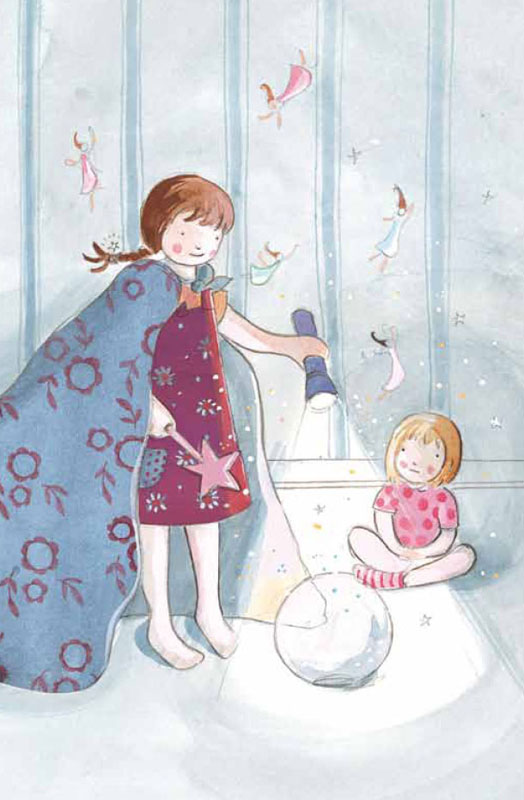 The rule is that
Little-kids-are-not-allowed-to-be-up-by-themselves-because-what-if-the-house-catches-on-fire
. But sometimes Mum does ask Biddy to play with Matilda. And Biddy doesn’t have a friend to play wizards with, and playing with a little sister might be better than with no one at all.

So Biddy lets Matilda come in. ‘We will pretend that you are my best friend,’ she says. ‘Your name is Isolde and you ride a beautiful white horse.’

‘But I can’t ride a horse,’ Matilda says.

‘Then you can have a
silver
Siamese cat with
blue
eyes,’ Biddy says.

‘Okay,’ Matilda says. She sits down, picks up her imaginary Siamese cat and starts to stroke it.

Biddy closes the door. The room is dead dark again.

Biddy turns the torch on. It hits the goldfish bowl and turns it into a crystal ball again.

Slivers of light rush across the room and shadows
flicker
on the walls. They look like nefariouses dancing. Nefariouses come from the Great Bushland. They are beautiful ancient creatures that dance in the shadows and hate noisy children.

I Think You're Totally Wrong by David Shields
Trial by Fire by Terri Blackstock
Hockey Confidential by Bob McKenzie
The Heart Healers by James Forrester
Contaminated: A Zombie Survival Novel by Suzanne Robb
Over the Moon by Diane Daniels
Legion's Lust by Samantha Blackstrap
TamingTabitha by Virginia Nelson
Panther's Prey by Doreen Owens Malek
Overtime in the Boss's Bed by Nicola Marsh
Our partner