Read Brothers Emanuel: A Memoir of an American Family Online

Brothers Emanuel: A Memoir of an American Family 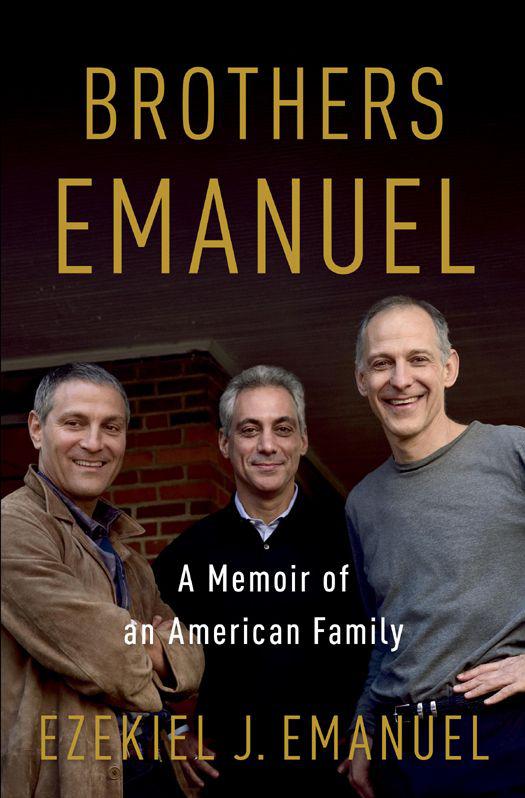 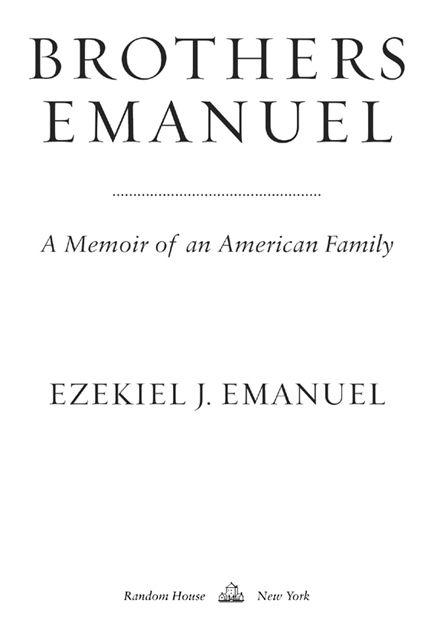 Brothers Emanuel
is a work of nonfiction. Some names and identifying details have been changed.

An autobiography is the truest of all books; for while it inevitably consists mainly of extinctions of the truth, shirkings of the truth, partial revealments of the truth, with hardly an instance of plain straight truth, the remorseless truth is there, between the lines, where the author-cat is raking dust upon it which hides from the disinterested spectator neither it nor its smell (though I didn’t use that figure)—the result being that the reader knows the author in spite of his wily diligences
.

One
Born to Protest

Five
Into the World

Seven
Right and Wrong and Good and Evil

Fifteen
Perfectionism and Its Discontents

Postscript
What Did Mom Put in the Cereal?

One
BORN TO PROTEST

That is my first memory in life.

He looked harmless enough, bundled in a blanket and struggling to focus his eyes. My cousin Gary and I were fairly impressed with his grasp reflex—all babies will grab on to a finger as it touches their palm. Since this was his only real trick, he seemed pretty useless. My mother, however, acted like he was extremely precious and treated him with so much care that it was clear that she loved him every bit as much as she loved me. Although I could not form the words, or express the feelings they evoked, part of me knew that here was a competitor.

In December 1959, Gary was five years old and I was just two. Two skinny kids with the same dark brown hair, brown eyes, and strong chins, we looked like brothers and spent so much time together that we felt like brothers, too. For months my parents had been trying to prepare me for the arrival of a real sibling. They had given me a doll to play with and encouraged me to take care of her. And when the baby, a little boy they named Rahm, finally arrived, they encouraged me to help take care of him, too.

On this particular morning, Gary and I were jumping up and down on our convertible sofa. It was a monstrous, ugly piece of furniture covered in indestructible black Naugahyde. When opened, it practically filled the living room in our first Chicago apartment and the metal that held the mattress was so thin and springy that when we used the sofa as a trampoline we could make the whole frame shake.

My mother had made breakfast, dispatched my father to care for patients at Michael Reese Hospital, and fed and diapered the baby. Dodging the toys on the floor—including that doll, which I had beheaded—she brought the baby into the living room and called to us to stop our gymnastics and come look at him. We did as we were told, inspecting the snuffling, wizened little creature with very dark skin, a snubby nose, and a wild spray of black hair.

“I’m going to put Rahmy down here and you boys can watch him for a little while. Take care of him,” said my mother. Clearly, she hoped we might like being the big boys in charge for a few minutes. My guess is that she also needed a little break.

We seemed agreeable enough, so she laid Rahm down on the sofa bed’s mattress and surrounded him with pillows to make him secure before leaving the room. It took us only a few seconds before we decided to climb back up on the bed and invent a new game that might have been called “Bounce the Baby.”

We positioned ourselves on either side of the little bundle and timed our jumps so that we landed simultaneously. The mattress bowed and the metal bands that held it were loaded with enough energy to bounce Rahm on the surface of the bed.

Instantly, we grasped the situation’s potential. With enough effort, and perfect timing, we might bounce Rahm off the mattress and onto the floor. We couldn’t restrain ourselves, and we were too excited to remember to be quiet. The noise we made as we jumped like a couple of jackhammers brought my mother running into the room.

It’s not so easy to stop bouncing once you get going. As Gary and I crashed together, my mother scooped Rahm off the bed with a sweep of her arm.

Tall, with long brown hair and a beautiful warm and open face, my twenty-six-year-old mother was young and strong but the sight of her second-born son being launched into the air had sent her heart racing. As Gary and I tumbled to a stop, she took a moment to catch her breath and choose her next move. Though we had behaved like idiots, my mother knew we were too young to have formed any malice aforethought. As a devotee of the pediatrician and author Benjamin Spock, who appealed to her with his radically sympathetic approach to childrearing, she had vowed to control the impulse to scream, hit, or punish us.

“Boys,” she finally said, “babies aren’t grown-up enough to play that way. You could have hurt Rahmy if he fell off the bed, or you fell onto him.”

She was right, of course. And she tried to correct us, without berating us. Few mothers would have exercised the restraint my mother showed that morning, and fewer still would have had such confidence in Spock’s advice that they would have followed it so closely, and with such conviction, in the heat of battle.

Later, she bundled us three boys up and bounced a stroller down the stairs so we could walk a few blocks in the stinging cold December air to a local market. Along the way we passed some of our neighbors, older Jewish women who clucked in Yiddish, assuming she did not know that they were saying something disparaging about the “hillbillies” with all their kids.

Low rents and easy access to public transportation had made our neighborhood popular with poor whites from Appalachia who flocked to Chicago seeking jobs. Distinctive in the way they talked, and dressed, these newcomers had met their share of bigotry and the term
hillbilly
was a put-down. My mother, who refused to use the word, startled the women with a little Yiddish admonition—“Ich bin a yid,” which means “I am a Jew”—to remind them of the ugliness of prejudice and their own ignorance.

In this one morning, the very first memory of my life, Marsha Emanuel had confronted, as a matter of routine, most of the responsibilities and issues that would define her adult life. She had risen early
to cook breakfast, care for three kids, and see her husband depart for a day’s work that might not end until late in the evening. Before noon she had saved Rahm’s life, taught Gary and me some life lessons, confronted bigotry on the sidewalk, and done a little shopping. All this would be repeated, in a rough way, for at least four thousand more days until the Emanuel boys—me, Rahm, and soon-to-come brother Ariel—started to be more self-sufficient. In that time, we would begin to define ourselves and begin to imagine our places in the world. The process began, of course, in the tiny community that was our family and in the even smaller circle that we made as brothers.

As in most families, especially in generations past, our mother was the parent of record and spent much more time with us than our father, Benjamin, did. Certainly he was very involved in our upbringing, and his parenting style—lots of hugs, kisses, jokes, and play—was unusual for the sixties. But he was the sole wage earner in the family, and as a young, poorly compensated medical fellow at Michael Reese Hospital, he worked more than seventy hours per week to support us.

My earliest memory of my father finds me standing at the window of the same apartment where Rahm was nearly bounced to the floor. Heat pours out of a steam radiator that squats below the window and my cousin Gary fidgets beside me. My nose is pressed against the glass as I stare down on a city street that is white with salt and banked by snow pushed off the traffic lanes by city plows. My father, on crutches after breaking his leg while dancing at a bar mitzvah, crosses North Broadway and hobbles to a spot where a sign lettered in faded yellow and green paint marks the stop for the 151 and 153 buses.

Gary and I watch as big cars with swooping tailfins slowly creep past. Within minutes a flat-faced city bus glides to a halt at the stop across the street. When it departs in a puff of diesel exhaust, my father and the others who had been standing there have disappeared.